As the tennis world begins to come out of lockdown, we celebrate those who found a special way to keep the sport alive through their personality, energy and wit. We rank the top 30. Here, we bring you No 15 to No 11. 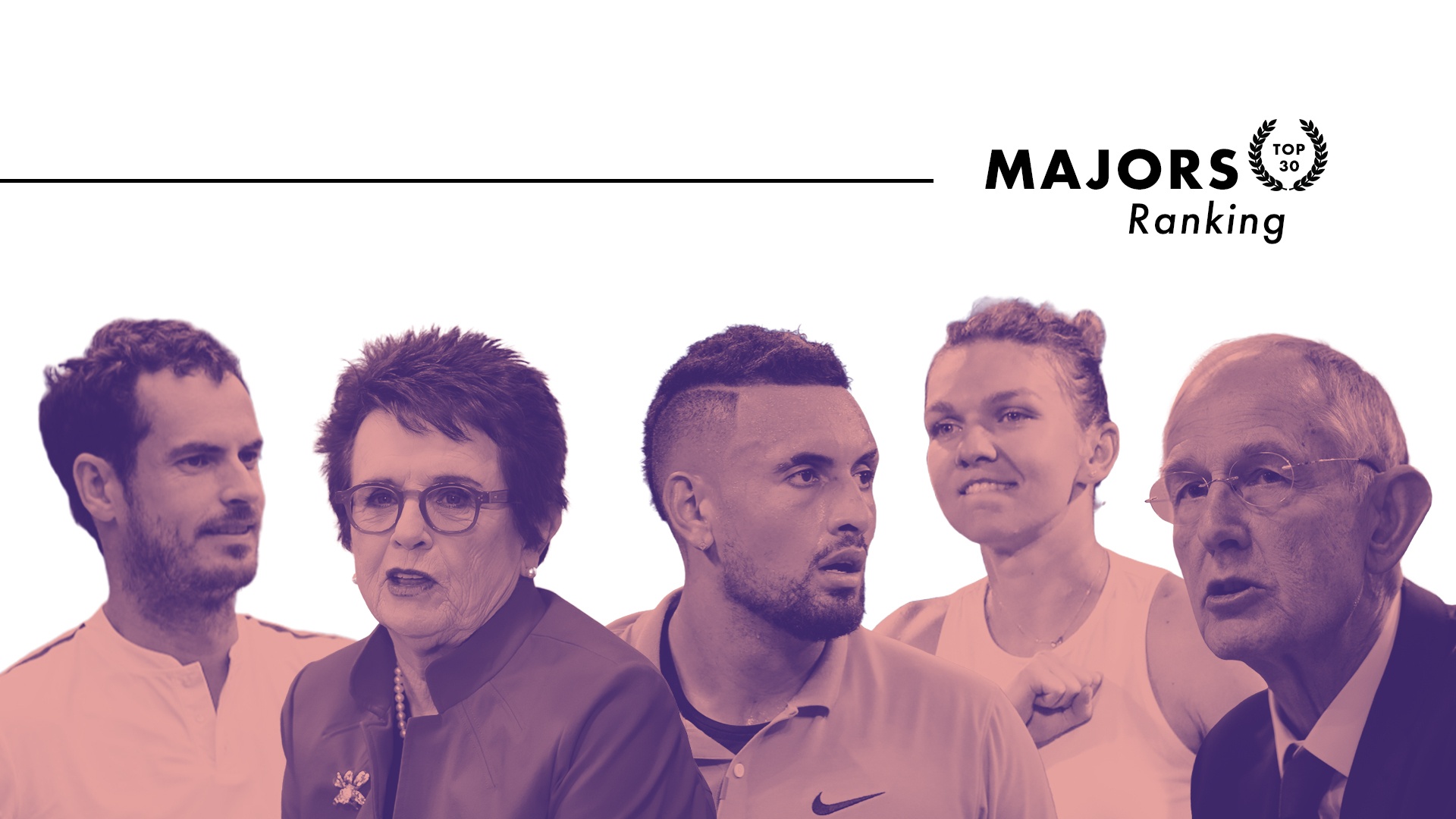 #15 Nick Kyrgios, showman on and off the court

What Nick Kyrgios did

The ever-controversial Nick Kyrgios helped people going hungry in the context of the coronavirus shutdown. He dropped food on doorsteps. “Don’t be afraid or embarrassed to send me a private message. I will be more than happy to share whatever I have”, he said in an Instagram post that has been liked more than 100k times.

The Aussie also proved very active on social media, as he usually is. He appeared in several Instagram Lives, expressing his views with no filter, for example with Andy Murray. He also reacted to the debate over the possible merger of the ATP and the WTA, being one of the only players to be opposed to take a public position against it, and to the discussion over giving financial help to low ranked players, fiercely opposing the opinion of Dominic Thiem.

Kyrgios’ food donation was another charitable effort after his bushfire relief campaign in January which raised millions of dollars in Australia. Having tennis stars involved in such actions is of great help for promoting tennis.

The manner in which he expresses himself with total honesty is also an attractive feature for tennis, while many players do not usually share controversial views.

Watch our Eye of the Coach: “Players act like robots, Kyrgios does the opposite”.

Kyrgios is one of the very few players that make a show on and off the court. We are looking forward to seeing his next move.

What Richard Lewis did

The chief executive of the All England Club, together with chairman Ian Hewitt, decided as early as April 1st to cancel the 2020 edition of The Championships.

“While in some ways this has been a challenging decision, we strongly believe it is in the best interests of society at this time”, commented Lewis.

At a time when the ATP and WTA Tours were only suspended until June 13th, such a quick decision surprised, at first. But it proved very accurate as the health situation continued to deteriorate.

Contrary to their French counterparts with the clay, the Britons could not reschedule the tournament, as they were constrained by grass, which is prepared all year to be specifically ready for the first fortnight of July. Having a policy insurance which covered the pandemic also helped Wimbledon to take this decision. They did not consider playing the tournament behind closed doors.

Besides, Wimbledon’s initiatives to support affected people showed that its willingness to prioritise public health over tennis was not mere communication. Wimbledon also notably released a video narrated by Roger Federer to support the medical staff and look at the 2021 edition.

Whether or not the US Open, played in one of the regions most affected by the virus, and Roland Garros will be held is still to be determined. Both Slams did not follow Wimbledon in cancelling and both are now scheduled to happen within a few weeks of each other in August and September/October, Covid-19 restrictions permitting.

What Simona Halep did
Having just got home in time from the United States before lockdown began, the Wimbledon champion wanted to help those in the front line in the fight against the virus. So she donated 30,000 euros “for the purchase of the necessary equipment and materials in such situations, directed immediately to the medical authorities in Bucharest and Constanta”.

We are so grateful for the bravery of our medical workers at these difficult times. I am committed to helping my country and have decided to donate medical equipment.

Stay safe and look after each other 💪🇷🇴❤ pic.twitter.com/z8kbYWPUWO

Why it matters
Simona Halep is a hero at home in Romania and everything she does is followed by millions of people. With that kind of platform, what Halep says and does matters and the 28-year-old has always shown she has a keen social conscience. “This is the perfect opportunity to show that we know how to be supportive and responsible with our lives and those around us,” Halep said.

What next
Expect Halep to continue helping the front-line workers in her home country.

What Andy Murray did

If Roger Federer got the ball rolling with his volleys against the wall, Andy Murray took things up a notch when he invited everyone to try to complete the 100-volley challenge.

A challenge to all tennis players and fans… The 💯 volley challenge. There was no bickering during the filming of the video 🙄, although I think the last volley was aimed at my head… I can’t be the only one that wants to see Rog and Mirka hitting a few balls together…🎾 pic.twitter.com/c0lMnNuSSQ

Working with his wife, Kim, who was a handy junior player, the Murrays completed the 100 volleys in their garden, with Kim firing the 100th volley past a ducking Murray. The Scot then laid down the challenge and his suggestion went viral, with world No 1 Novak Djokovic and his wife Jelena among the first to respond.

Idemooo the 💯 volley challenge was too easy for @jelenadjokovic haha bravoo 😂👏🏼💪🏼. Thanks for the fun nomination Kim and @andymurray!

And coach Darren Cahill roped in three members of his family to help.

It took us about 23 attempts, lots of blaming and laughs but we got there in the end @andy_murray. The 100 volley challenge by the Cahill’s 💪😊 pic.twitter.com/BwxbPNcmi6

And then Murray showed his he is just as good at tennis on a console as he is the real thing, taking part in and winning the first ever Madrid Mutua Open Virtual Pro event while he also gave his backing to Roger Federer’s suggestions the ATP and WTA could merge to be stronger together.

Why it matters
Murray’s challenge engaged his fellow players and general tennis fans, adding a bit of lightness to life in lockdown.

What next?
Given how many people posted videos of themselves completing the challenge, 100 was too easy. Maybe he should go for 200? 300? 500? You are still free to share videos, dear reader.

What Billie Jean King did

The musings by Roger Federer on Twitter about the idea of an ATP-WTA merger may have taken the tennis world by surprise but Billie Jean King has been campaigning for a merger for almost 50 years. She soon answered Federer with her thoughts, telling him that the two governing bodies would be stronger together, Billie Jean King’s position surely helped Federer expressing such a view as he knew she would back them .

I agree, and have been saying so since the early 1970s. One voice, women and men together, has long been my vision for tennis.

The WTA on its own was always Plan B.

I’m glad we are on the same page.

Why it matters
King has led the calls for a merger ever since she helped to found the WTA Tour in 1973. The American pushed for and won equal pay for women in tennis and she has an incredible influence on women’s sport in general, speaking out on all sorts of issues. She has the respect of all players, both current and from the past and quite simply, when Billie Jean speaks, people listen.

What next
In an interview with CNN alongside Andy Murray, King revealed that she had already spoken to Federer about how a merger might happen, while she also insisted that it has to be a collaboration, not an acquisition.

Roger Federer has raised the idea of merging men’s and women’s tennis.@andy_murray: “It’s definitely a step in the right direction.” @BillieJeanKing: “When top male players bring it up, people listen… We’re much stronger… if we’re together.” pic.twitter.com/ZXjHYe9usd