Each day, Tennis Majors takes you back in time to an important moment in tennis history. On This Day — March 30 — in 1997, Thomas Muster defeated Sergi Bruguera in a Miami Open final featuring two clay-court specialists. 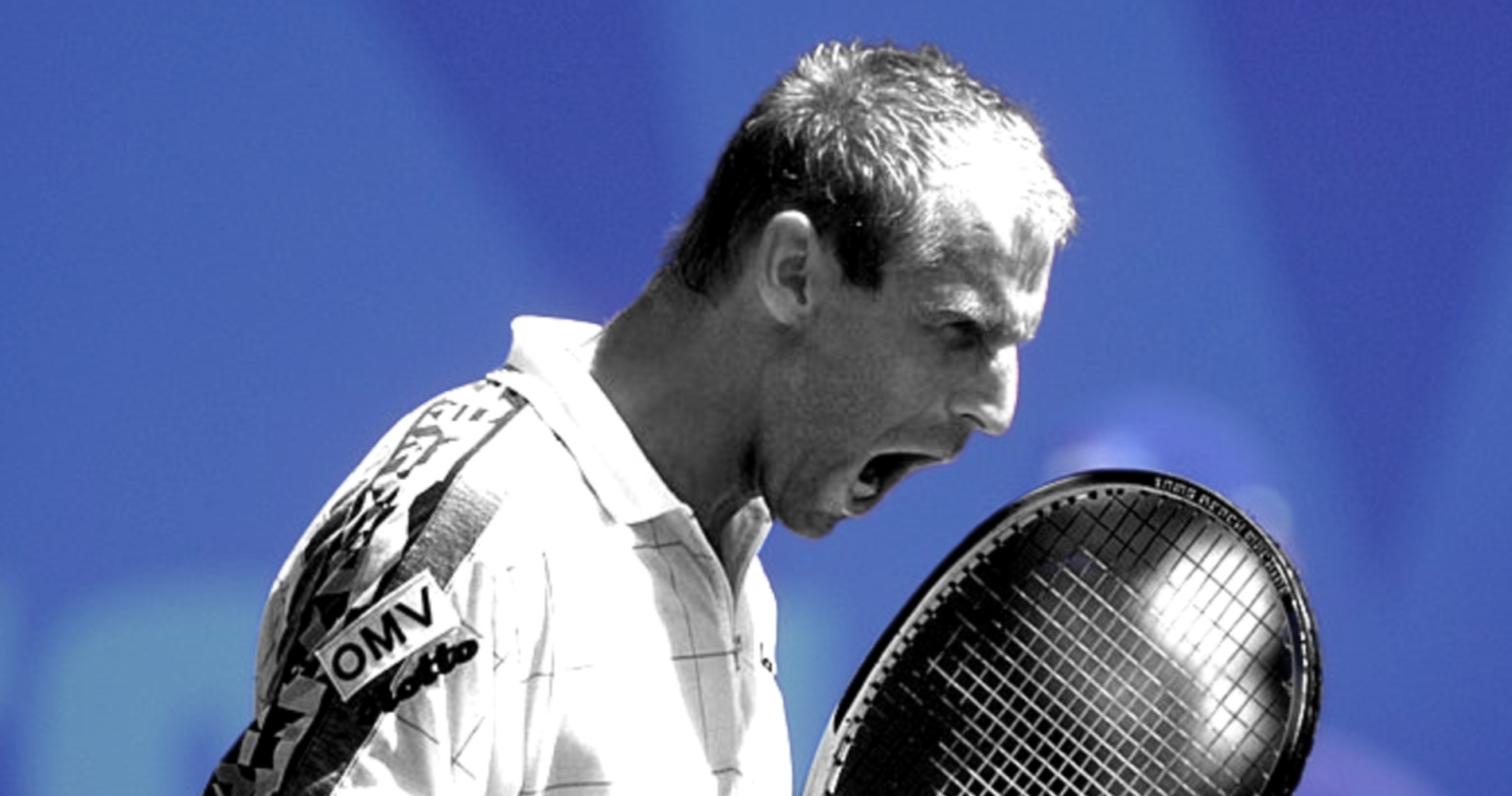 On this day, March 30, 1997, in a clash of clay-court specialists and former Roland-Garros champions, Thomas Muster defeated Sergi Bruguera 7-6, 6-3, 6-1 in the final of the Miami Open, the third prestigious hard-court event of the year. It was almost eight years to the day that the Austrian had seen his career threatened after a car accident which happened just as he had qualified for the 1989 final. It was also the first time since 1989 that the Miami final didn’t feature at least one American player.

Thomas Muster was born in 1967. Left-handed, he developed a typical clay-court game — with a lot of spin on both sides and great fitness. His tactics relied on long and intense rallies from the baseline, which earned him the nickname “Musterminator.” He won his first title on the tour in 1986 in Hilversum, on red dirt, defeating Jakob Hlasek 6-1, 6-3, 6-3 in the final. Although all his titles were claimed on clay until 1990, he had his Grand Slam breakthrough on hard courts at the 1989 Australian Open — where he reached the semi-finals (lost to Ivan Lendl 6-2, 6-4, 5-7, 7-5). That year, just after he beat Yannick Noah in the Miami semi-finals (5-7, 3-6, 6-3, 6-3, 6-2), he was hit by a car and his knee was badly damaged. Following surgery, Muster left a print in tennis history with a picture of him hitting forehands while sitting on a bench with his leg in a cast. It became the very image of resilience.

Back in the day

1989. Thomas Muster, future No. 1, trains for his comeback after a drunk, unlicensed driver slammed into Muster's car in Miami before the final

His will to come back paid off and he was back on the tour in 1990, and soon he reached the semi-finals at Roland-Garros that year — losing to eventual champion Andres Gomez 7-5, 6-1, 7-5. Despite his first hard-court title in Adelaide (defeated Jimmy Arias 3-6, 6-2, 7-5 in the final), he realised that playing on clay was much better for his knee and he specialized even more, claiming almost all of his titles on his favorite surface. He notably triumphed at the Italian Open in 1990 and at the Monte-Carlo Open in 1992. In 1995, he completed one of the most successful clay-court seasons of all-time, remaining undefeated for 40 consecutive matches on red dirt while triumphing in Estoril, Barcelona, Monte-Carlo, Rome, and finally at Roland-Garros (beat Michael Chang 7-5, 6-2, 6-4 in the final). Later that year, he claimed his first Masters 1000 on indoor carpet, in Essen, defeating Pete Sampras 7-6, 6-2 in the semi-finals and MaliVai Washington 7-6, 2-6, 6-3, 6-4 in the final. He finished the season as world No 3, having accumulated no less than 12 titles throughout the year, and in early 1996 he reached world No 1 for a total of six weeks. In the spring, he went on a second incredible clay-court winning streak, claiming five titles in Mexico, Estoril, Monte-Carlo, Barcelona, and Rome before he was defeated to general astonishment by Michael Stich in the fourth round of Roland-Garros (4-6, 6-4, 6-1, 7-6). In March 1997, having reached the semi-finals at the Australian Open (lost to Sampras 6-1, 7-6, 6-3) and at Indian Wells, he was world No 2.

Sergi Bruguera, born in 1971, made himself known to the general public at the French Open in 1990, when — aged 19 and holding the 46th ATP ranking — he defeated world No 1 Stefan Edberg in the first round (6-4, 6-2, 6-1). A real clay-court specialist, he claimed 14 titles throughout his career — only one of those on a hard court, in Bordeaux in 1993. He relied mostly on heavy topspin on both sides, with western grips and a very consistent backhand which he almost never missed. His game was so defensive that he was familiar with skipping the grass-court season and had only played three times in Wimbledon since the start of his career. His biggest achievement was triumphing twice in a row at Roland-Garros. The first time, in 1993, he was world No 11 and — after giving Frenchman Thierry Champion the last triple bagel in Grand Slam history in the second round — he defeated two-time defending champion Jim Courier in an epic five-set battle (6-4, 2-6, 6-2, 3-6, 6-3). In 1994, he managed to defend his title by beating fellow Spaniard Alberto Berasategui 6-3, 7-5, 2-6, 6-1 in the final, and he climbed as high as world No 3. The Miami Tennis Open, originally named the Lipton International Players Championship, was held for the first time in 1985 in Delray Beach, with the idea of being the first big tennis event of the year (at the time, the Australian Open was held in December). The tournament moved to Key Biscayne in 1987, and Miloslav Mecir was the first to triumph at the new Crandon Park venue. The event was played on slow hard courts and in extreme heat and humidity. Nonetheless, with huge prize money and a 96-player draw, by 1997 it was considered as one of the biggest tennis tournaments in the world outside of Grand Slams. Andre Agassi was the two-time defending champion.

The 1997 Miami Open final was an unexpected clash of clay-court grinders between Thomas Muster and Sergi Bruguera. The two players had both built up their careers on red dirt, and they had both triumphed at Roland-Garros – Muster in 1995, Bruguera in 1993 and 1994.

However, the Austrian — who had won an indoor Masters 1000 in Essen in 1995 and had recently reached the Australian Open semi-finals for the second time — had already proven that he was not to be underestimated on hard courts. In fact, he had already made his way into the final in Miami in 1989, but he was struck by a drunken driver near a downtown mall after his semi-final win. Being back in the final in 1997 was “the biggest justice [he]could have got,” he said, according to The New York Times.

Although he probably expected to face Pete Sampras in the final, he had the pleasant surprise to see the world No 1 being upset — to general astonishment — by Bruguera. On hard courts, the Spaniard was not as scary as Sampras, and on top of that Muster had a comfortable 12-2 lead in their head-to-head series. The Austrian had not lost to Bruguera in four years, having notably defeated him in the final of the 1995 Italian Open to establish himself as the new clay-court terror.

Under a scorching tropical heat, the two former French Open champions grinded their way into a first-set tiebreaker, where Bruguera lost an easy point to give away a set point. A few seconds later, Muster had taken the first set 7-6.

“I knew the first set was probably going to be the deciding factor in the match, a big mental factor,” Muster later explained.

He was right; after the loss of the opening set, Bruguera slowly melted and was swept off the court, 6-3, 6-1.

”After I lost my big chances in the first set, I got very down in my mind,” confirmed the Spaniard.

For the Austrian, claiming the title in Miami — where he had suffered a career-threatening injury — was of course very special.

“It was a bit emotional,” said Muster, according to the Tampa Bay Times. “Maybe after the French Open, [this was] the most emotional moment in my career. I think, you know, life is just sometimes a bit scary because everything comes back.”

At Roland-Garros, Sergi Bruguera would make his way into the final for the third time in five years, but he would not manage to claim a third crown, defeated by Kuerten in straight sets (6-3, 6-4, 6-2). After a fourth round reached the same year at the US Open (lost to Marcelo Rios), he would never go past the second round of a Grand Slam tournament again, nor would he claim another ATP title. Struggling with injuries, he would leave the top 100 in the second half of 1998. In his last appearance at the French Open, in 2001, he would retire at the start of the fourth set of his second round against Michael Russell, suffering from insolation. Sergi Bruguera would retire from tennis in the summer of 2002.