Home > Our features > On this day > June 5, 1983: The day Yannick Noah restored French glory in Paris

Every day, Tennis Majors takes you back in time to relive a tennis event which happened on this specific day. On June 5, 1983, Yannick Noah sent the whole of France into delirium as he became the first Frenchman to win the Roland-Garros title in the Open Era 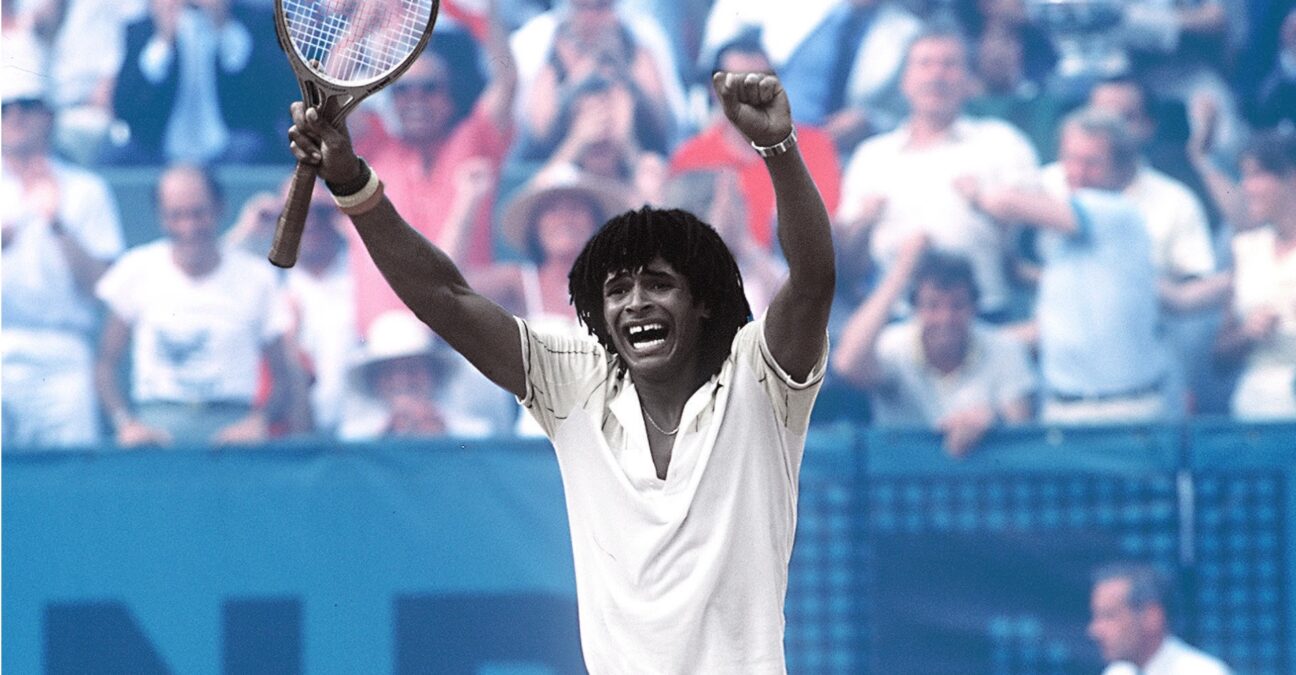 On this day, June 5, 1983, Yannick Noah edged Mats Wilander, 6-2, 7-5, 7-6, in the Roland-Garros final. Aged 23, Noah was the first Frenchman to triumph at home since Marcel Bernard in 1946. His victory was a milestone in the history of French sport, especially since he has remained, to this day, the last French player to claim a Grand Slam title in men’s singles. Noah’s triumph would also be remembered as the last time a player won Roland-Garros while consistently serving and volleying. Also, it was the last time a player claimed a Grand Slam title using a wooden racket.

Yannick Noah was born in 1960 in Sedan, in the north of France, but his family moved back to Cameroon soon after he was born, and that was where he grew up. Young Noah started playing tennis without much hope of becoming a great player, as there were only eight tennis courts in the entire country. However, a meeting with Arthur Ashe, who had come to play an exhibition match in Yaoundé in 1971, changed the course of his life. The American, who was the first black player to have claimed a men’s singles major title, gave Noah a helping hand and the young man soon came to France to become a professional tennis player.

He started his career in 1978, claiming his first title on the tour in Manilla, Philippines. He improved constantly, and in 1981 he reached the quarter-finals at Roland-Garros and fell to Victor Pecci, after defeating Guillermo Vilas in the fourth round. In 1982, it was again Vilas that toppled him in the quarter-final at Roland-Garros. That year, Noah led the French Davis Cup team to its first final since 1933, where they were defeated by the American team. In 1983, he had become a serious contender for the Roland-Garros title by winning two clay-court tournaments, the first one in Madrid, and the second in Hamburg, which was at the time the biggest title of his career. There, Noah would beat Jose Higueras in the final (3-6, 7-5, 6-2, 6-0). At the time, he was ranked No 6 in the world, and was by far the best French player on the tour.

Mats Wilander, born in 1964, had been very successful at a particularly young age. In 1982, aged only 17 years and 9 months, he had become the youngest player ever to win a Grand Slam trophy, edging clay-court legend Guillermo Vilas in the final (1-6, 7-6, 6-0, 6-4). Wilander had also made himself famous for a memorable act of sportsmanship earlier in the tournament. In the semi-final against Jose-Luis Clerc, on his first match point, he reversed a call that would have sealed his victory after the umpire had already announced “game, set and match.” In 1982, in a Davis Cup quarter-final, Wilander played the longest match of the Open Era, losing after six hours and 22 minutes to John McEnroe (9-7, 6-2, 15-17, 3-6, 8-6). Wilander was the fifth seed at Roland-Garros in 1983. 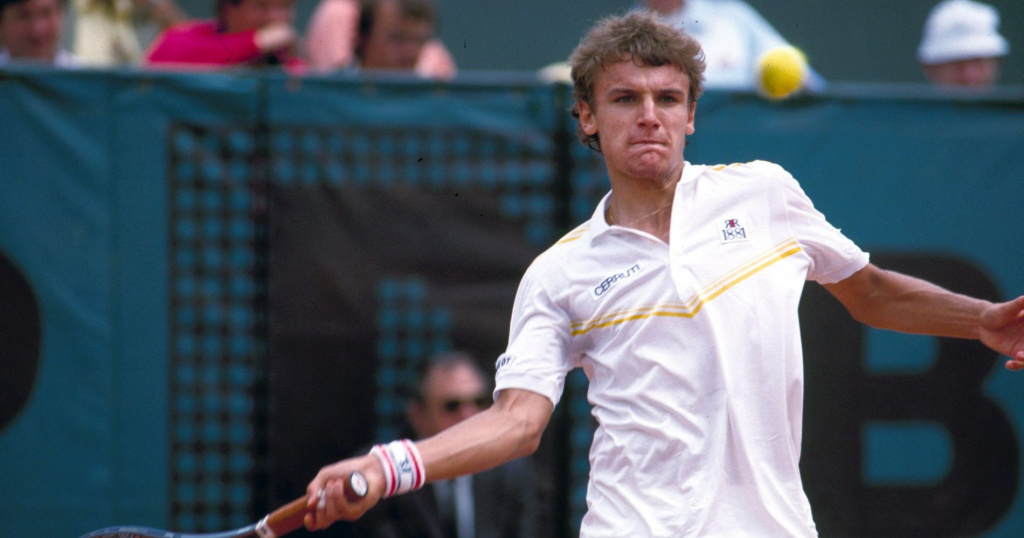 Wilander was the defending champion and had the perfect game style to prevail on red dirt. He was extremely consistent, and his physical condition was among the best of his time. On the other hand, Noah played serve-and-volley, a strategy that had not been successful at Roland-Garros over the past decade.

The facts: Noah fulfills a personal and a nation’s dream

Wilander, despite his young age, had already experienced a successful Grand Slam final, the year before, when he defeated Guillermo Vilas for the Roland-Garros title. However, the circumstances were very different this time around. Not only did Wilander have to face the local favourite Noah, but he would have to grapple with the delirium of all of France which stood behind him as he mounted his quest to become the first French male to win Roland-Garros in 37 years. 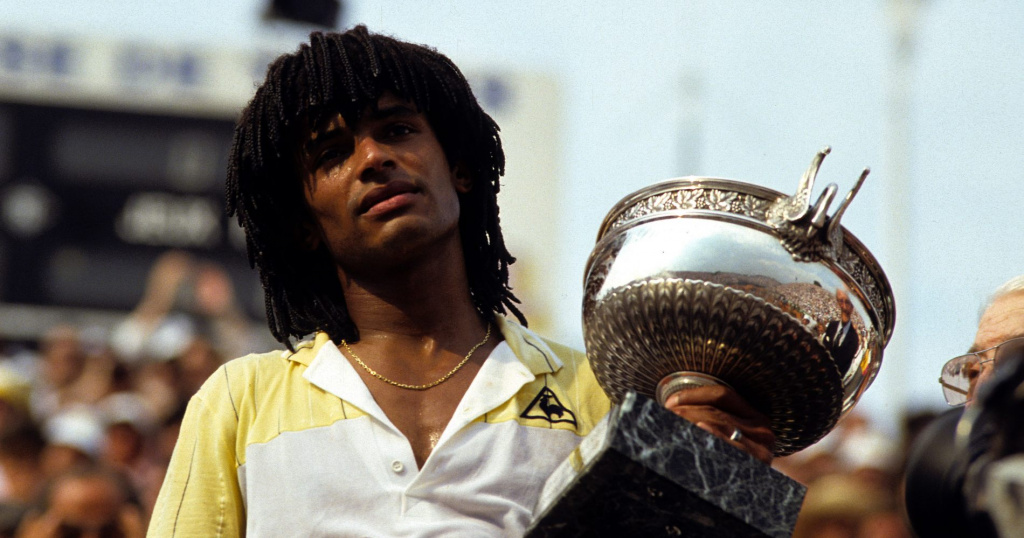 Noah had said himself that he was on a mission. He had put himself through a very rigorous preparation with only one goal: conquer the Holy Grail of French tennis players, the Musketeer’s trophy. So far his efforts had paid off. After he defeated world No 3 Ivan Lendl in the quarter finals, the dream started to take shape and, in the semi-final, he destroyed fellow French player Christophe Roger-Vasselin, 6-3, 6-0, 6-0. But Noah still had the defending champion Wilander standing between him and his dream. Was he going to be able to handle the pressure of carrying the hope of an entire nation and defeat such a worthy adversary?

Noah responded to that question in just 36 minutes, by taking a lopsided first set, 6-2. It was already apparent that the circumstances were not going to prevent him from playing his attacking game in this final. The Frenchman had dreamt of the final the night before and had seen himself losing.  He hated that feeling so much that Wilander’s passing shots were not going to stop him, and soon he even led 5-3 in the second set. It might have been a cakewalk, but the Swede was not the kind of player to back down from a challenge. He put his amazing defensive skills to work and clawed his way back to even the score at five apiece. Noah kept his nerves under control and sealed the second set 7-5, to the delight of the crowd.

The third set proved to be a thriller, with Noah starting to show signs of fatigue as nerves creeped in. He was so close to his dream, but steely Wilander was gaining in confidence. An intense, back-and-forth fight took the players to a tie-break. On his second match point, after two hours and 25 minutes of play, Noah followed his serve to the net, but he did not have to volley: Wilander’s return was off-the-mark. Noah could kneel on Court Philippe Chatrier’s fabled clay and rejoice: he had fulfilled his dream and given French tennis its first Grand Slam men’s singles title since 1946.

In a joyful display of emotion, his father, Zacharie, leaped over the fence and stormed onto the court to jump into his arms and celebrate the moment. In an ultimate symbolic gesture, the Musketeer’s trophy would be handed to him by Marcel Bernard himself; he was not the last Frenchman to have won Roland-Garros anymore.

At the time, Noah’s triumph at Roland-Garros would have a great impact across the entire country. His achievement would be all over the media and Noah would be considered a national hero, to the point where it would perhaps become too big of a responsibility to carry for a 23-year-old man. He had made his dream come true at a young age and he would never find the energy to light the same fire in his racket again. Noah would remain a top 10 player for some time, reaching two more quarter-finals at Roland-Garros and the semi-final at the 1990 Australian Open, and when he retired from the game, he would own 23 titles in singles and a Roland-Garros crown in doubles in 1984, which he won partnering compatriot Henri Leconte.

Noah would soon become a successful Davis Cup captain, leading his team to three titles, in 1991, 1996 and 2017. The 1991 title would remain one of his major achievements, because the French team shocked an American dream team featuring legends including Pete Sampras and Andre Agassi.  Noah would also become the captain of the French Fed Cup team which won the competition in 1997. Last but not least, the talented Frenchman would also start a successful career as a singer and sell several million records.

Wilander would become known as the second greatest player of the 1980’s, behind Ivan Lendl. His peak year would undoubtedly be 1988, when he would reach the world No 1 ranking after claiming three out of the four Grand Slam titles. That season he would end up edging Leconte, in the Roland-Garros final. In total, Wilander would win Roland-Garros three times and claim seven Grand Slam titles, the only one missing from his list of achievements being Wimbledon, where he would never go past the quarter-finals. After his career, Wilander would stay involved in tennis as an analyst for TV channels and papers such as L’Equipe. 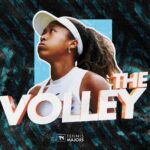