Home » News » US Open » September, 11, 1988: The day Wilander defeated Lendl in the longest US Open final of all-time

September, 11, 1988: The day Wilander defeated Lendl in the longest US Open final of all-time

Every day Tennis Majors takes you back in time to celebrate a great moment in tennis history. Today, we go back to 1988 to witness how Mats Wilander won a four-hour and 54-minute US Open final against Ivan Lendl to became world No 1 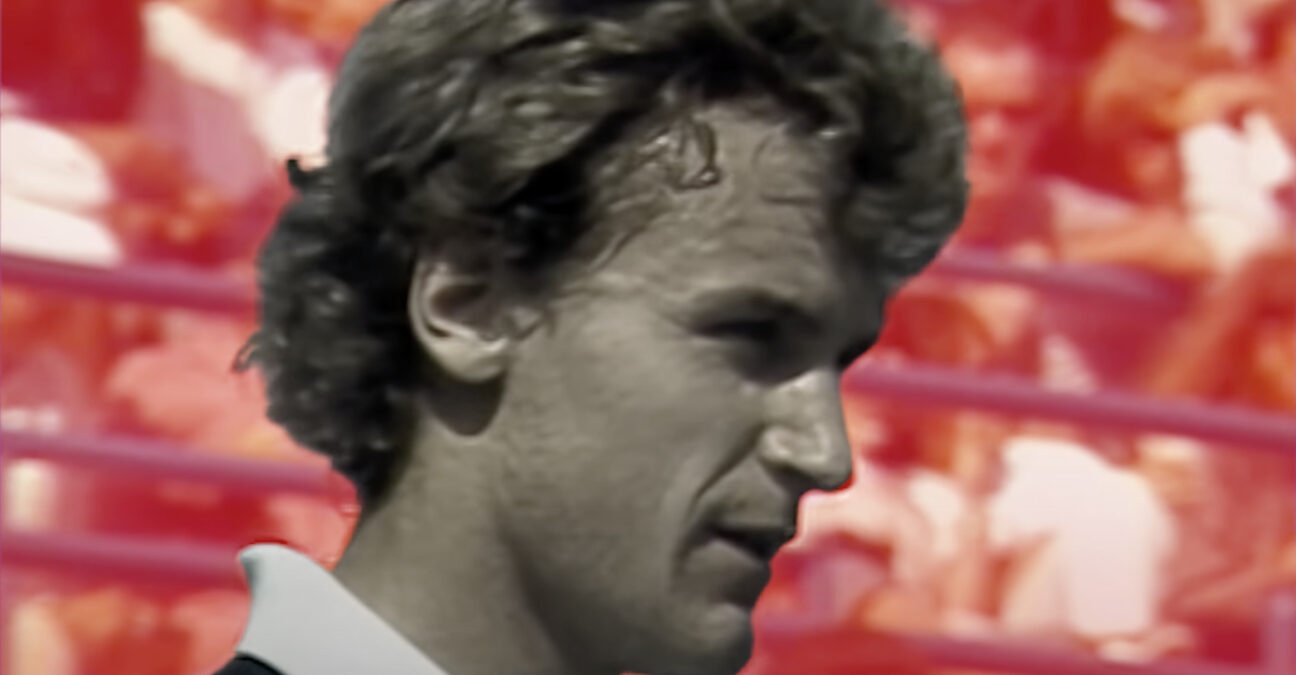 On this day, September 11 in 1988, 24-year-old Mats Wilander defeated Ivan Lendl, the three-time defending champion, in four hours and 54 minutes (6-4, 4-6, 6-3, 5-7, 6-4) in the longest final in the US Open history. The Swede, at the peak of his form that year, had already triumphed at both the Australian Open and Roland-Garros, and this third Major crown made him the new world No 1.

Mats Wilander, born in 1964, had been very successful at a particularly young age. In 1982, aged only 17 years and 10 months, he had become the youngest player ever to lift a Grand Slam trophy, beating clay court legend Guillermo Vilas in the final (1-6, 7-6, 6-0, 6-4). He had also made himself famous for a memorable act of sportsmanship earlier in the tournament. In the semi-final against Jose-Luis Clerc, on his first match point, he reversed a call that would have sealed his victory after the umpire had already announced “game, set and match”. In 1982, in a Davis Cup quarter-final, he also played the longest match of the Open Era, losing after six hours and 22 minutes of play to John McEnroe (9-7, 6-2, 15-17, 3-6, 8-6). Runner-up to Frenchman Yannick Noah at Roland-Garros in 1983 (6-2, 7-5, 7-6), he claimed a second Grand Slam title a few months later, defeating Ivan Lendl (6-1, 6-4, 6-4) to triumph on the Australian grass to everyone’s surprise, as his game style was much more suited to clay courts.

Born in 1960, Ivan Lendl set new standards in the baseline game, with a very powerful topspin forehand that allowed him to play aggressively while staying extremely consistent, pushing his opponents into a very tough physical challenge. He also set new standards in work ethics, practicing more than anyone before him, paying attention to his fitness and to his diet in a way that tennis players had never done before. After turning professional in 1978, he stood as one of the four best players in the world since 1980, along with Bjorn Borg, John McEnroe and Jimmy Connors. Although he had won dozens of ATP titles, including the Grand Prix Masters in 1982 (defeating Vitas Gerulaitis, 6-7, 2-6, 7-6, 6-2, 6-4), he didn’t claim a Grand Slam title before 1984. In fact, he had been beaten four times in Grand Slam finals, once in Roland-Garros (in 1981, defeated by Bjorn Borg), twice at the US Open (beaten by Jimmy Connors in 1982 and 1983), and once at the Australian Open (lost to Mats Wilander in 1983).

In 1984, Lendl finally triumphed at Roland-Garros, defeating John McEnroe in an epic final where he came back from two sets down to lift his first Grand Slam trophy (3-6, 2-6, 6-4, 7-5, 7-5). In 1985, he reached the final at the French Open (defeated once again by Wilander), but at the US Open, a few weeks after becoming world No 1 again, he claimed a second Grand Slam crown, beating John McEnroe in the final (7-6, 6-3, 6-4). In the following years, Lendl dominated the game, clinching Grand Slam titles at Roland-Garros and the US Open – in 1986 and 1987. He hadn’t managed to triumph at Wimbledon, although he had finished runner-up twice, in 1986 (to the young defending champion Boris Becker, 6-4, 6-3, 7-5) and 1987 (defeated by Pat Cash, 7-6, 6-2, 7-5). In 1988, Lendl had suffered from injuries, and his results had been disappointing, compared to his usual standards: having failed to reach a Grand Slam final before the US Open, he was on the verge of losing the No 1 spot to Wilander.

The place: US Open

The US Open (known as the US National Championships before 1968 and the start of the Open Era), was established in 1881, and, although it is the only Grand Slam to have been played every single year without an interruption since its inception, it moved several times locations throughout the 20th century. First held in August 1881 on grass courts at the Newport Casino, on Rhode Island, the tournament moved to New York in 1915, where it was held at the West Side Tennis Club, at Forest Hills until 1977 (with the exception of years 1921-1923, when the event was held in Philadelphia). In the years 1975-1977, the event was played on clay. In 1978, the US Open left the West Side Tennis Club, which had become too small for such an important event, and moved to the USTA National Tennis Center, located in Flushing Meadows, New-York, and the decision was made to change the surface to hard courts. The National Tennis Center was one of the biggest tennis complexes in the world:  its Center Court was the Louis Armstrong Stadium, which had a capacity of 14,000 spectators.

The facts: Wilander adopts a new strategy to dethrone Lendl

When Mats Wilander and Ivan Lendl faced each other in the 1988 US Open final, there was more at stake that just another Grand Slam title: if the Swede was to win, the Czechoslovakian would lose the world No 1 spot for the first time in 190 weeks. In fact, Lendl had been No 1 since his first triumph at Flushing Meadows in 1985, where he had remained undefeated since then, and where he was the three-time defending champion.

The two men had already faced each other in the 1987 final, which, although they only played four sets, turned out to be the longest final in US Open history (won by Lendl in four hours and 47 minutes, 6-7, 6-0, 7-6, 6-4). Lendl had prevailed in their last six encounters; however, it was not enough to make him the favourite on that day. Since their last match, at the 1987 Masters Cup, Wilander had improved a lot. The Swede, known for his consistency from the baseline, had worked a lot on his game at the net, and he was now capable of putting a new form of pressure on his opponents. He had won the Australian Open and Roland-Garros, and was eager to become No 1.

12 months earlier, Wilander had been defeated from the baseline, but this time, he had decided to apply his new skills at the net to change the dynamic, coming to the net no less than 131 times during the final. ”I’ve changed my thinking a little bit this year,” Wilander said, according to The New York Times. ”I’d rather get beat by someone hitting passing shots than staying back, trusting my own groundstrokes. I wanted to see what I could do.”

This strategy proved to be successful, as Lendl, on many important points, was unable to hit the powerful forehand passing shots which had caused so much pain to many of his rivals in the past. This adjustment was one of the keys to Wilander’s success, along with his famous consistency – the Swede only made 36 unforced mistakes throughout the match, while Lendl made 83. However, it still took him four hours and 54 minutes to take down the three-time defending champion (6-4, 4-6, 6-3, 5-7, 6-4), and seize the world No 1 ranking.

”I realized tonight why it was hard hard for Borg to win,” Wilander said. ”It is so tough, mentally and physically. Because it’s a tournament that I’ve never won, or a Swede has never won, and because I’m going to be No. 1, it’s the biggest match I ever played. It meant so much.”

”It was a tough year for me, but you have to look at it and accept it,” said a disappointed Lendl. ”Losing the No 1 ranking has not sunken in it. But I’m not going to sit back worrying about it. I’m going to think about getting it back.”

What next? Wilander loses the top spot as Lendl goes back to No. 1 in 1989

The 1988 marathon between Ivan Lendl and Mast Wilander would remain the longest US Open final of all-time.

The 1988 US Open would remain Wilander’s final Grand Slam title. An unexpected loss to Carl-Uwe Steeb in the Davis Cup final would later appear as the first sign of Wilander’s decline. He would never reach another Grand Slam final, and by the end of 1989, he would be out of the top 10 once and for all.  In 2020, he would explain his decline in an interview to the ATPtour.com : “I felt like I was the best player in the world during the year of 1988, but once I got labelled No. 1 with an actual ranking, I actually had a shocking four months… I guess I was just horrible at dealing with that pressure.”

Ivan Lendl would suffer another disappointing loss in 1988, defeated in the deciding tiebreak of the 1988 Masters Cup by Boris Becker (5-7, 7-6, 3-6, 6-2, 7-6). He would reclaim the world No 1 spot on January 30, 1989, after his first triumph at the Australian Open (defeating Miloslav Mecir in the final, 6-2, 6-2, 6-2). After a memorable loss to Michael Chang at Roland-Garros, he would be defeated by Becker in the semi-finals at Wimbledon and in the final at Flushing Meadows, but he would finish the season as world No 1 for the fourth and last time.