On this day in tennis history, France shocked the all-star USA side en route to Davis Cup glory. 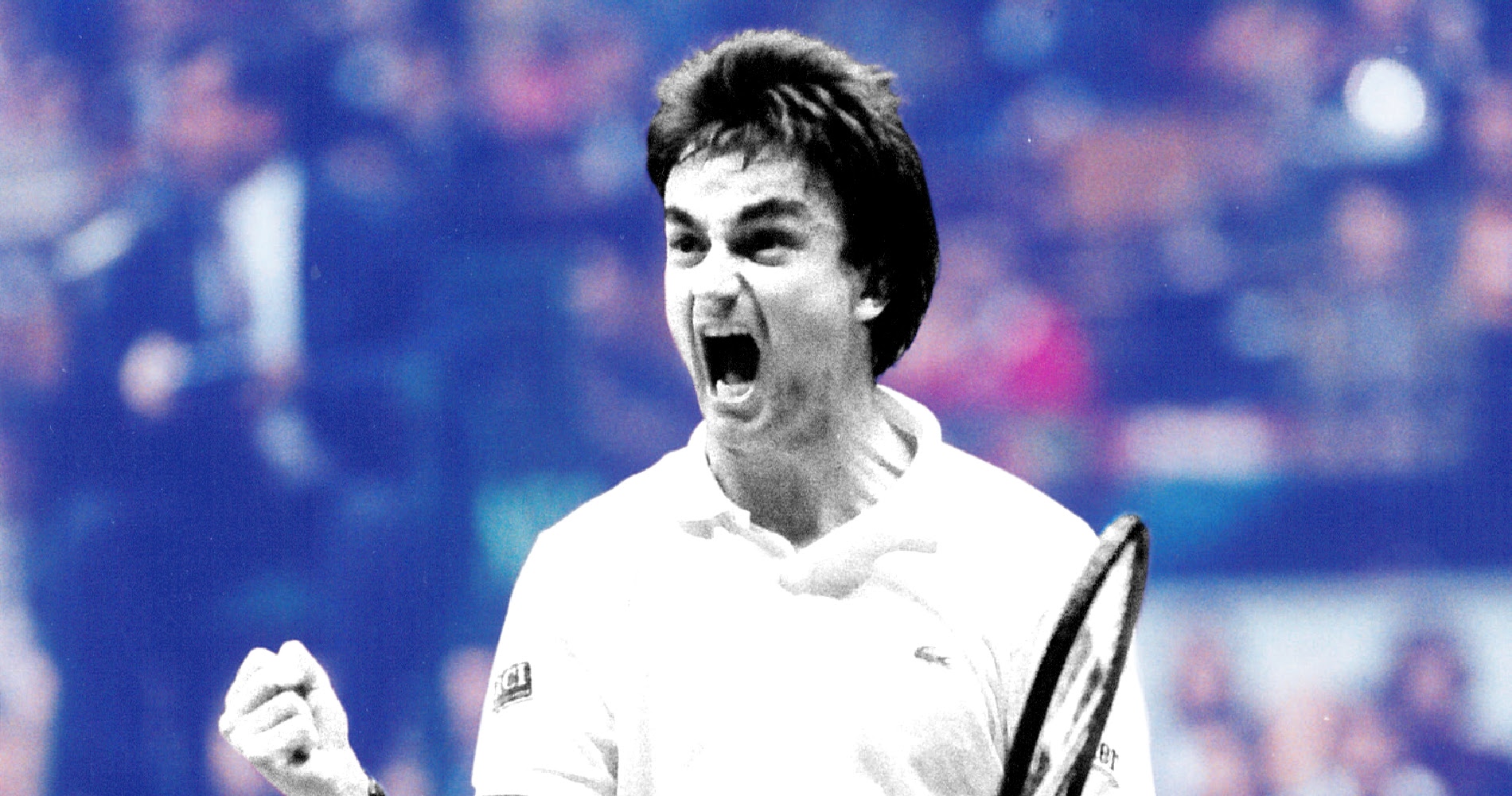 On this day, November 29, 1991, in the Davis Cup final, Frenchman Henri Leconte delivered one of the most unexpected and most impressive performances of all time to defeat world No 6 Pete Sampras (6-4, 7-5, 6-4). The lefty, who had been world No 5 in 1986 but was now No 159 after undergoing back surgery, played flawless tennis to level the tie to 1-1 against the United States. The following day, he would also prevail in doubles, partnering Guy Forget, and on Sunday, France would win its first Davis Cup in 59 years. 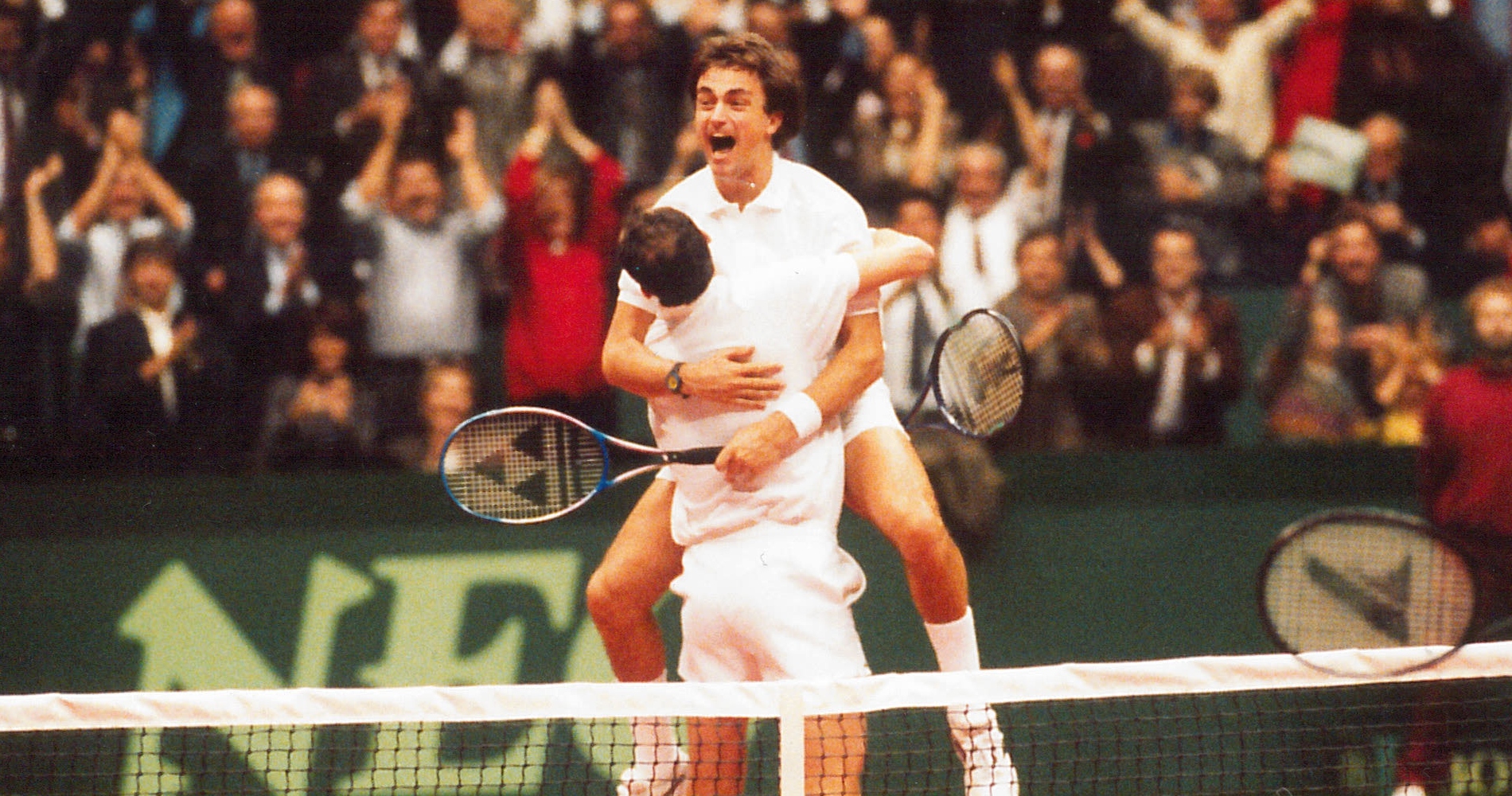 Unfortunately, he was overwhelmed by the pressure and the few words he said during the trophy ceremony were misinterpretated by a part of the French crowd who ended up booing him. Leconte finished the year as world No 9, but from 1989, his career was disturbed by numerous injuries, and he couldn’t perform regularly at his best level. Defined by Becker as “a player who makes shots that don’t exist”, and by Nick Bollettieri as a very dangerous player “because sometimes he doesn’t even know what he’s doing”, he had to undergo back surgery during the summer of 1991 and was now world No 159. 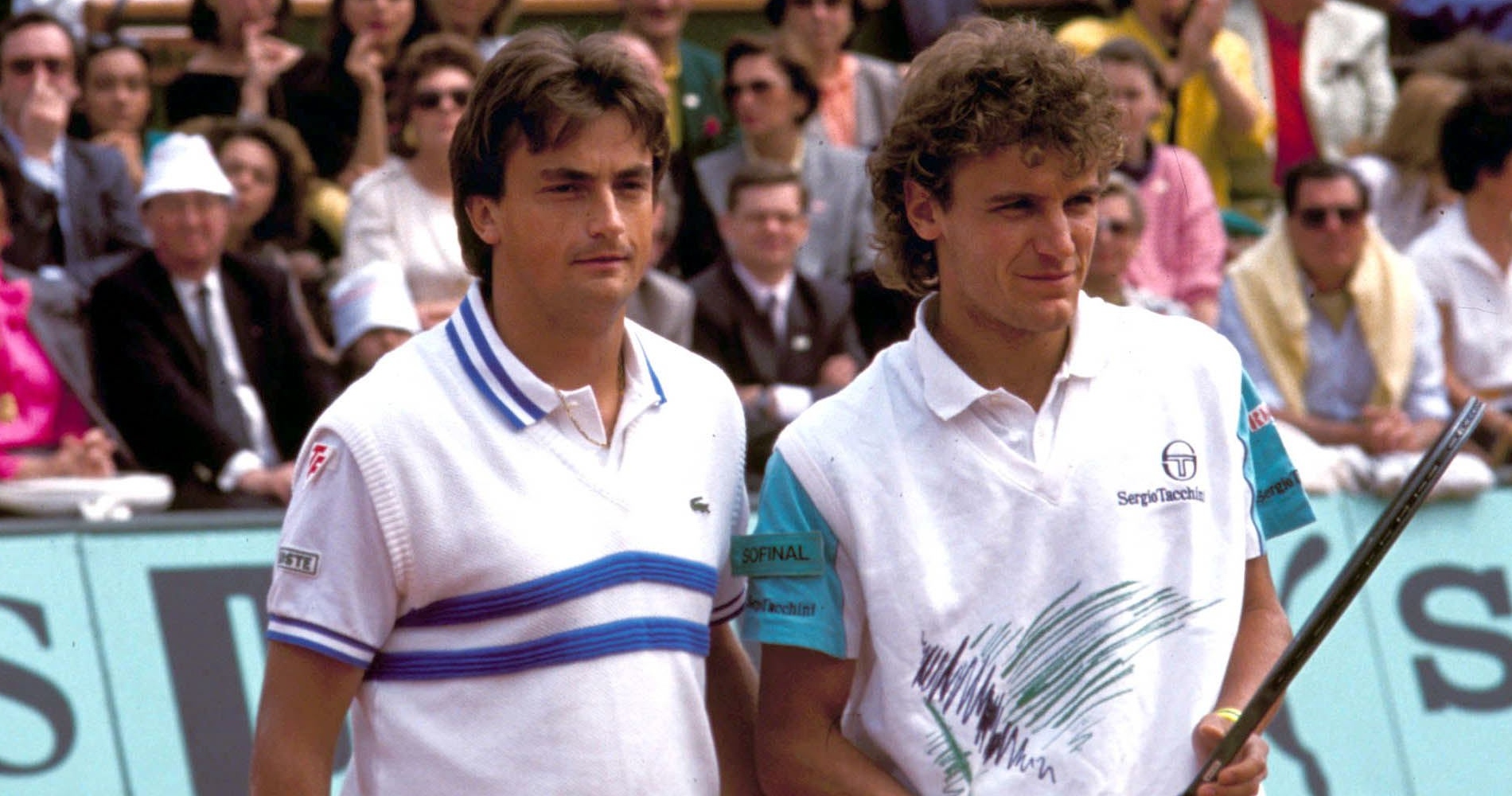 Pete Sampras was born in 1971. Although he was a part of a golden American generation, along with Andre Agassi, Michael Chang and Jim Courier, he was the last of them to become a top player. At the end of 1989, while his rivals had all claimed titles and achieved remarkable Grand Slam performances, Sampras was only No 81 in the world. In November that year, Ivan Lendl, world No 1 at the time, invited him to his house to practise with him for ten days: the young American then realized what kind of work was required to become a champion.

Six months later, he had already broken into the top 20 after having claimed his first two titles in Philadelphia and Manchester. In September 1990, he took the world of tennis by surprise by becoming the youngest player to ever triumph at the US Open, defeating Agassi in the final (6-4, 6-3, 6-2). Thanks to this great win, he entered the top 10, but in the first half of 1991, Sampras struggled to confirm his new status. During the American summer tour, he had obtained better results, triumphing in Los Angeles, Indianapolis and Lyon, but he had lost his US Open title, defeated by Courier in the quarter-finals (6-2, 7-6, 7-6). A first title at the Masters Cup, where he took his revenge against Courier (3-6, 7-6, 6-3, 6-4), confirmed his improvements.

The 1991 Davis Cup final was held in Lyon, France, at the Palais des Sports de Gerland, an indoor venue which could host up to 8,000 spectators. The French team chose a fast indoor surface that matched the game style of their best players, especially Guy Forget, who was world No 7 and had just won the Paris Indoor Open on a similar surface.

In France, the Davis Cup final was the main sports event of winter 1991. The French team, despite its good players, had not performed very well since the final they lost against the United States in 1982, but this year, with Yannick Noah as their captain, all the players had played at their best level to propel the team into the final.

Right after the semi-final against Yugoslavia was over, the captain started to think of a plan to upset the all-star American team in the final. The United States had three top ten players (Pete Sampras, Andre Agassi and Jim Courier) as well as one of the best doubles team in the world (Ken Flach and Robert Seguso). Noah felt that he had to pull out something, or someone, special. That someone was Henri Leconte, the only player who, on his best days, could upset Sampras and Agassi, and could also challenge the best at doubles. 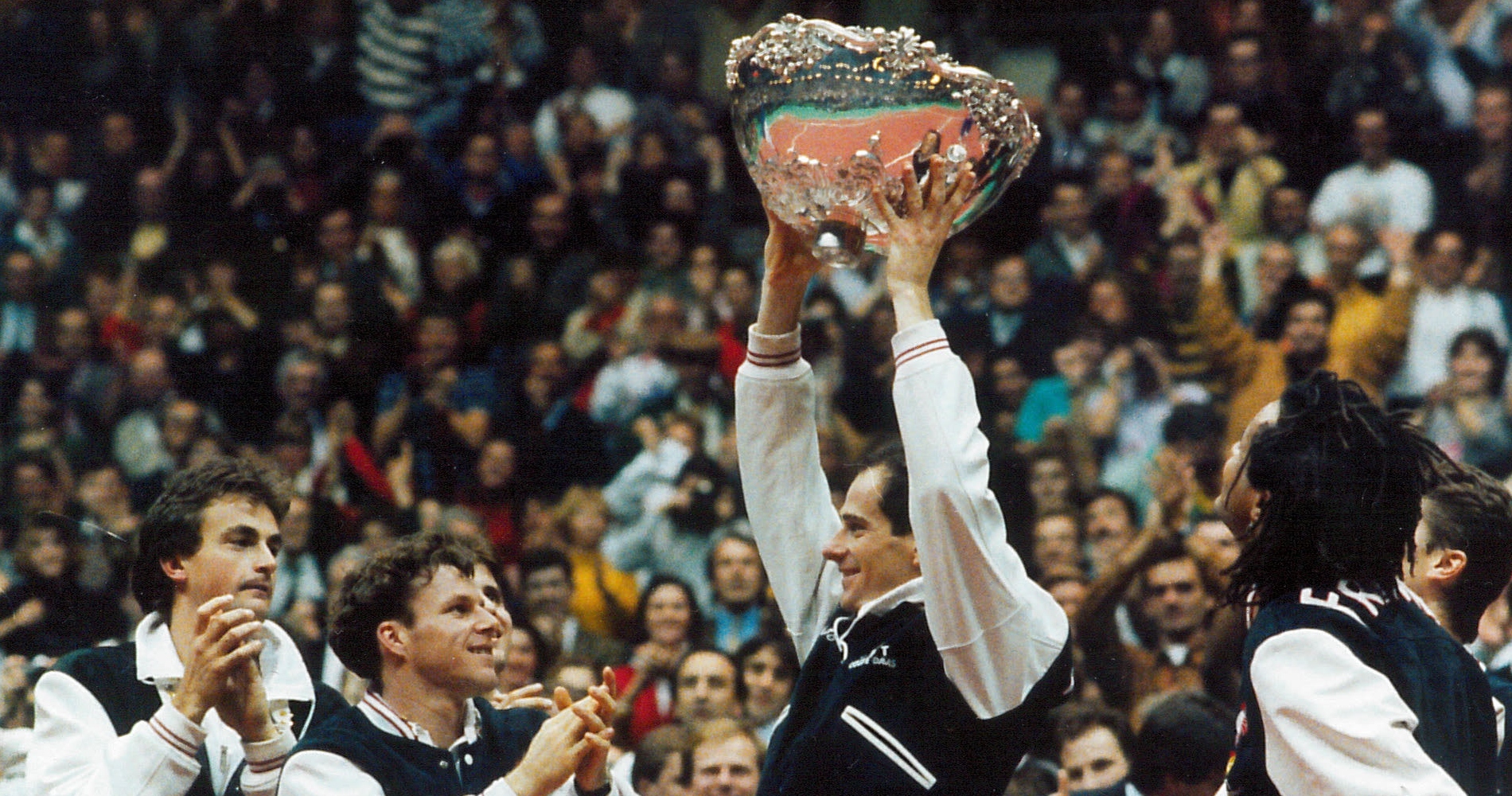 The major problem with Noah’s plan was that, at the time, Leconte was recovering from back surgery. Ranked world No 159, some thought that his career might even be over, and that he would never play at his best level. Nonetheless, he accepted Noah’s call, and he underwent a real commando course in order to get ready for the final. His condition improved, and his game slowly came back. The week prior to the event, preparing for the doubles, he didn’t lose a single set against his teammates. The Monday before the final, Noah came to Leconte to announce to him that considering his level, he was going to play in singles as well.

“Sure, no worries,” said the lefty.

On Friday, November 29, the long-awaited final didn’t start well for the French team. Their No 1 player, Guy Forget, was defeated by Agassi (6-7, 6-2, 6-1, 6-2). Instead of putting extra pressure on Leconte’s shoulders, the scenario added to his determination, and he kept his cool before facing the Masters Cup champion.

“Don’t worry, I’m going to kick his ass,” he told Forget as he was going out for the match.

“From the first point, I knew that I was going to beat him up. I pulled out everything. This backhand volleys that I pulled out…I felt invincible,” Leconte would recall years later, for eurosport.fr. “It was one of these days when you feel like you can do anything. It just works. I was like a painter with his brush, it was magical.”

In 1992, Leconte would receive a wild card to attend Roland-Garros, where he would achieve his last remarkable Grand Slam performance by reaching the semi-finals (defeated by Petr Korda, 6-2, 7-6, 6-3). He would claim the ninth and last title of his career in Halle in 1993 (defeating Andrei Medvedev in the final, 6-2, 6-3).

Pete Sampras would recover from this nightmare and become world No 1 in 1993. He would set a record of 14 Grand Slam titles claimed during his career, triumphing seven times at Wimbledon, five times at Flushing Meadows and twice in Australia, but at Roland-Garros, his best performance would remain a semi-final reached in 1996. He would also win the Masters Cup no less than five times, and he would spend 286 weeks as world No 1. Although most of his amazing records would seem unbeatable at his retirement, in 2003, most of them would be beaten by Roger Federer in the following decade. That is, all but one: between 1993 and 1998, Sampras would finish six consecutive years as world No 1, a record which not even Federer, Nadal or Djokovic would manage to challenge.