Every day, Tennis Majors looks back to some of the biggest moments in tennis history. On September 9, 1969, Rod Laver beat Tony Roche to complete the calendar-year Grand Slam for the second time 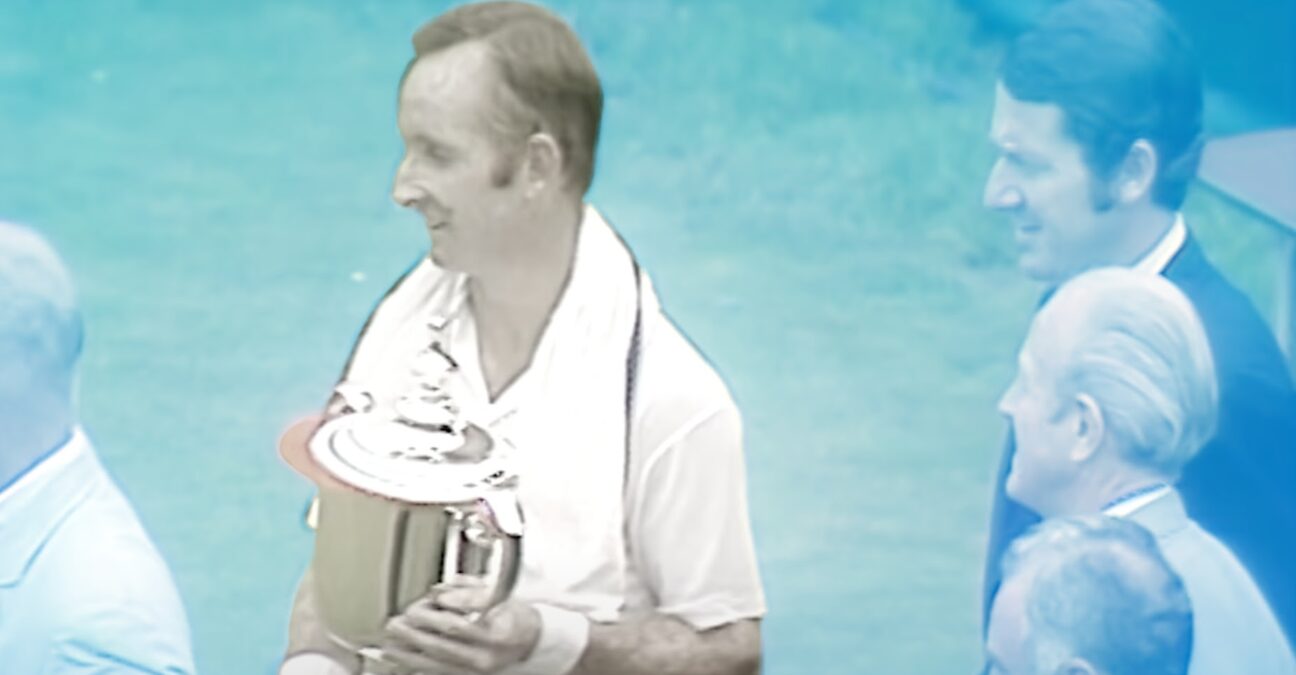 On this day, September 9, 1969, Rod Laver, who had already achieved the Grand Slam once, as an amateur, in 1962, defeated Tony Roche in the US Open final (7-9, 6-1, 6-2, 6-2) to win a fourth consecutive major title in the same year; the calendar-year Grand Slam. Although in 1962 many experts had claimed that the absence of the best tennis players in the world clouded his achievement, this time, in the Open era, there was no way to diminish the value of his feat.

Rod “Rocket” Laver, born in 1938 in Queensland, Australia, had set records in his early career as an amateur; achieving the impressive feat of completing the Grand Slam in 1962, while simultaneously being a part of the four-time winning Australian Davis Cup team between 1959 and 1962. In 1963, he was signed as a touring professional player, and although his rookie year proved to be pretty tough (losing 19 of his 21 first matches), he eventually grew to become the best on the pro tour as well. In 1967, just before the Open era, Laver completed the “Pro Grand Slam”, winning the four main professional tournaments of the season. When the Open era began, Laver was still at the peak of his form. Runner-up at Roland-Garros in 1968, in the first Open Grand Slam tournament in tennis history, he triumphed at Wimbledon a few weeks later (defeating Tony Roche in the final, 6-3, 6-4, 6-2). In 1969, he dominated the game, as he won the first three Grand Slam tournaments of the year, defeating Andres Gimeno in the Australian Open (6-3, 6-4, 7-5), Ken Rosewall at Roland-Garros (6-4, 6-3, 6-4) and John Newcombe at Wimbledon (6-4, 5-7, 6-4, 6-4). He now had the opportunity to achieve a second calendar Grand Slam, if he was to triumph at the US Open, where he arrived as the heavy favourite, having remained undefeated in his last 23 matches.

Tony Roche, born in 1945 in New South Wales, Australia, began playing tennis at the age of 9. He reached his first Grand Slam final in 1965 as an amateur, at Roland-Garros, defeated by countryman Fred Stolle (3-6, 6-0, 6-2, 6-3). One year later, in the same place, he claimed his first and only major title in singles, defeating István Gulyás in the final (6-1, 6-4, 7-5), after his opponent had agreed to delay the final by 24 hours to allow Roche to recover from an ankle sprain. In 1968, Roche joined the pro tour known as the Handsome Eight, in the United States, and the same year, as the Open era began, he finished runner-up to Rod Laver at Wimbledon. In 1969, he pushed the same Laver into an epic semi-final match at the Australian Open (lost 7-5, 22-20, 9-11, 1-6, 6-3). He also held 7 Grand Slam titles in doubles, partnering John Newcombe.

The place: The iconic West Side Tennis Club in Forest Hills, New York

The US Open, formerly known as the US National Championships – until the beginning of the Open era, in 1968 – was established in 1881, and, although it is the only Grand Slam to have been played every single year without an interruption since its beginning, it moved several times locations throughout the 20th century. First held in August 1881 on grass courts at the Newport Casino, on Rhode Island, the tournament moved to New-York in 1915, where it was held at the West Side Tennis Club, at Forest Hills (with the exception of years 1921-1923, when the event was moved to Philadelphia).

The facts: Rod Laver makes history for the second time

1969 was the first entire season of the Open era, which had begun in the spring of 1968. For the first time in tennis history, professional and amateur players could all compete in the same tournaments, including the Grand Slams, which pros couldn’t attend until then. For 30-year old Rod Laver, who had achieved the feat of winning all the four majors as an amateur in 1962, it was an extra motivation.

It was a great feeling to be able to all compete again,” Laver said, according to tennishead.com.“Maybe a light shone down on me that said: ‘You’re in this game for a reason, so compete hard and play hard.’ I think that showed up in 1969.”

“Rocket” decided to attend the four Grand Slam tournaments, which not many of his peers were doing at the time – Australia was still too far away for many touring players. Laver began the season by winning the Australian Open, which was held that year in Brisbane, and by finding out that his wife was pregnant, and that the due date coincided with the US Open final.

Seven months later, the Australian lefty arrived in New York as a soon-to-be father, but also as the heavy favourite of the US Open, being only a few more wins away from an amazing second Grand Slam. However, Laver had quite a rough ride to win the first three majors of the year. In Australia, his countryman Tony Roche made him work hard to survive a four-hour semi-final clash, played under scorching heat. At Roland-Garros and Wimbledon, he came back from two sets down twice in the early rounds, before lifting the trophy a few days later. Following his triumph at the All England Club, Rocket was on fire, winning the 23 matches he played before the US Open began.

Laver, who had the Grand Slam close at hand and seemed almost invincible, drew a lot of attention, but, as he would explain later, thinking of his pregnant wife reduced the pressure. “Thinking of Mary certainly eased my concerns about completing the calendar-year Grand Slam,”, he would explain, 50 years later, according to atptour.com.

Laver settled at Charlton Heston’s place, on the Upper East Side, and began the last leg of his journey. This time, it was Denis Ralston, from the United States, who pushed him into a five-set combat in the fourth round (6-4, 4-6, 4-6, 6-2, 6-3). In the semi-finals, Laver defeated Arthur Ashe, the defending champion (8-6, 6-3, 14-12). Now, the last man standing between him and the Grand Slam was Tony Roche, who had given him so much trouble at the Australian Open.

“I wasn’t afraid to lose,” said Laver, 50 years on. “But I knew it was going to be a very tough match, so I had to put my best foot forward.”

Due to phenomenal rain delays, the final was played on Tuesday, September 9. The grass court was still slippery, and Laver, at the end of the first set, was allowed by the umpire to wear spikes, as it was the last match and it was no big deal if the court was slightly damaged. “I ended up losing that set, but I had spikes on and felt more comfortable.” This proved to be a good decision for Rocket, who dominated the three following sets to prevail, (7-9, 6-1, 6-2, 6-2). The new US Open champion jumped over the net to shake his opponent’s hand, and quickly went to find a phone to check on his wife (who was not in labour yet) and to tell her that he had just completed a second Grand Slam.

What next: Laver never reaches another Grand Slam final

In the post-match press conference, Rod Laver would tell the press that he was probably going to take a step back from tennis, after having achieved this amazing second Grand Slam.

“I felt pretty happy and that I hadn’t been with my wife too often,” he would tell the ATP. “ I felt it was time that I needed to be with Mary and my child.”

His wife would give birth just three weeks later, allowing him to be by her side to meet their son.

In the following years, Laver would focus mainly on the World Championship Tour, where he would remain one of the best players until the mid-70s. He would only attend eight Grand Slam tournaments until his retirement in 1977, with the 1969 US Open remaining his last major title.

No other male player would win four consecutive major tournaments until Novak Djokovic, in 2015-2016, and no man would achieve the calendar Grand Slam again, which would only add to the aura of Rod Laver’s legend. The Australian Open center court would be named after him in 2001, and in 2017, Roger Federer would establish a team competition which he would name the Laver Cup.