Home > Our features > On this day > April 28 1968 : The day Ken Rosewall beat Rod Laver to win the first Open tournament in Bournemouth

Every day, Tennis Majors takes you back to the biggest moments in tennis history. On April 28, 1968, Ken Rosewall beat Rod Laver in Bournemouth to win the first tournament of the Open Era 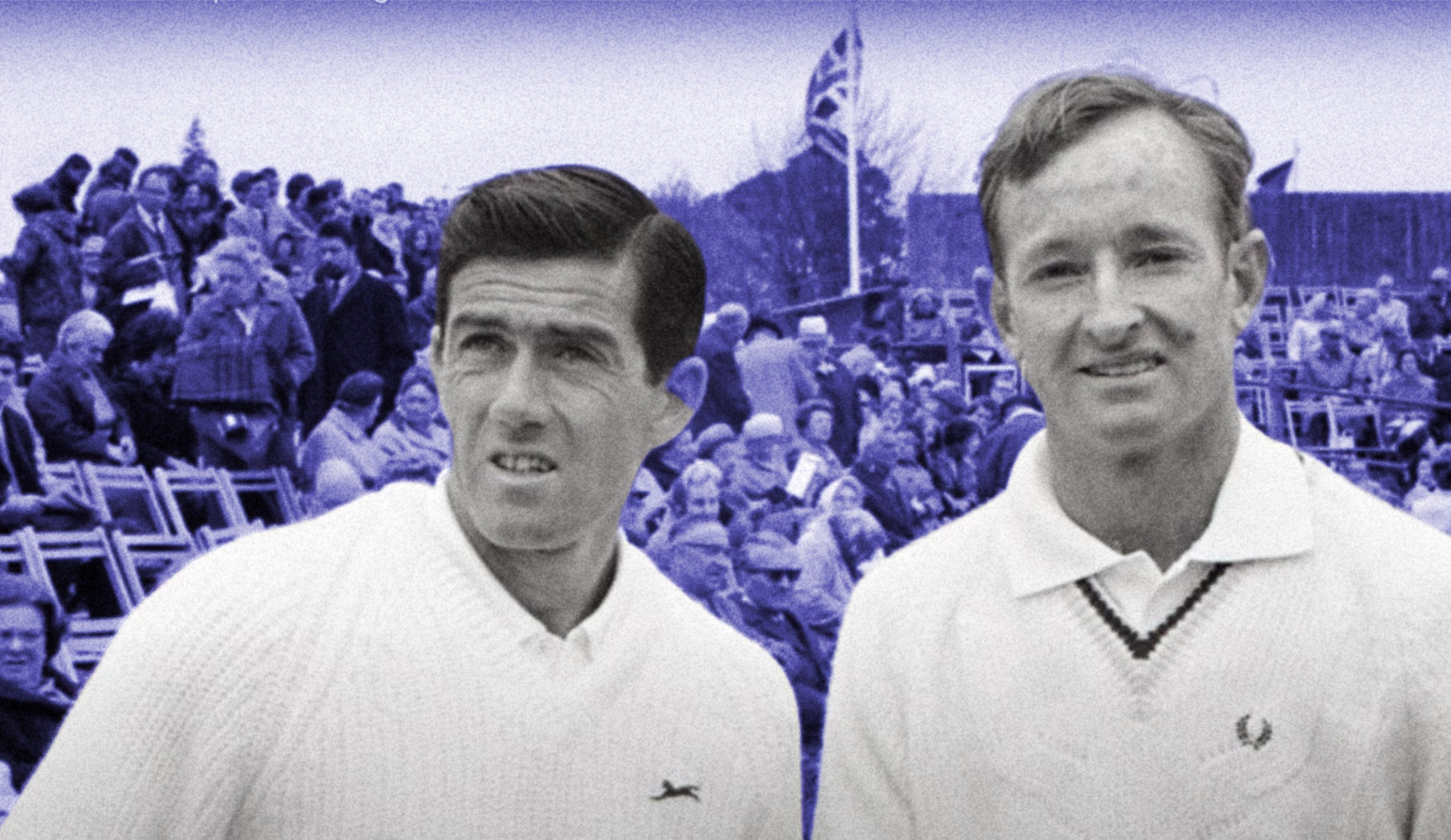 On April 28, 1968, in a final split over two days, Ken Rosewall beat fellow Australian Rod Laver in four sets (3-6, 6-2, 6-0, 6-3) to win the first tournament of the Open Era in Bournemouth, United Kingdom. The 1968 British Hardcourt Championships, offering £2,400 in prize-money for the champion, was played under high scrutiny. After years of controversy about professionals’ status, it was the first time that amateurs could compete against professionals. Claiming the title on that day against his long-time rival, Ken Rosewall did more than win a tennis tournament; He set the standards for a new era of tennis.

Ken Rosewall, born in 1934, was one of the best amateur players in the 1950s, claiming four Grand Slam titles and winning the Davis Cup three times with Australia. At the end of 1956, after he got married, he signed a contract with Jack Kramer to become a touring professional player, which at the time meant that he could no longer compete in any Grand Slam tournaments, or participate in the Davis Cup. Rosewall was considered to be one of the best players of his time, winning as many as 15 major pro titles.

Rod “Rocket” Laver, born in 1938, had an even better amateur record, achieving the impressive feat of completing the Grand Slam of Wimbledon, US Open, Roland-Garros and Australian Open, in 1962, while simultaneously being a part of the four-time Australian Davis Cup winning team between 1959 and 1962. In 1963, he signed as a touring professional player. Although his rookie year proved to be pretty tough (losing 19 of his 21 first matches), he eventually grew to become the best on the pro tour as well. In 1967, just before the Open era, Laver completed the “Pro Grand Slam”, winning the four main professional tournaments of the season. 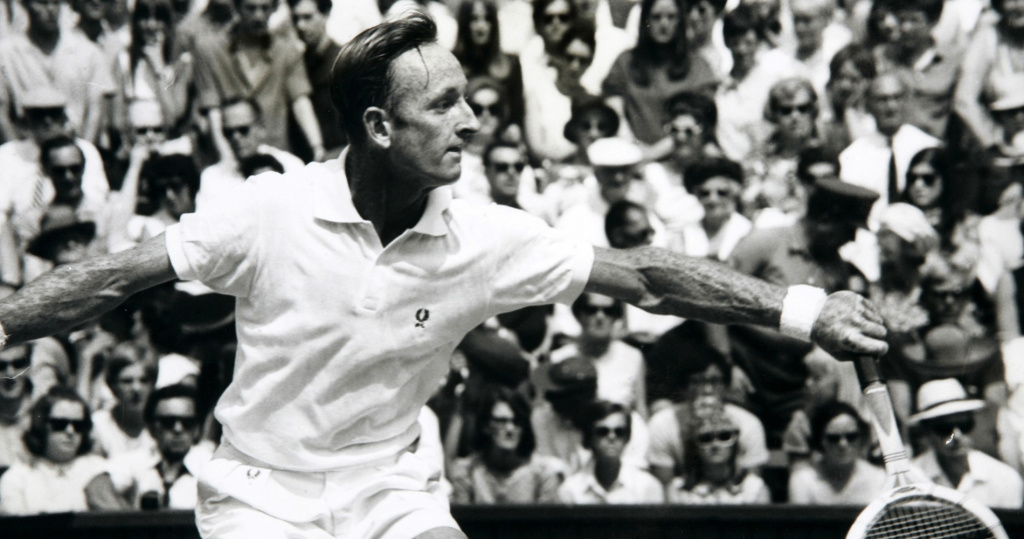 The first tournament of the Open Era was held at The West Hants Club, in Bournemouth (Dorset), from April 22 to April 27, 1968. Since 1928, the West Hants Club had hosted the prestigious British Hardcourt Championships, considered to be the second most important tennis event in the United Kingdom after Wimbledon. The tournament was played on outdoor clay courts, and Rod Laver was not a stranger here, as he had claimed the title before as an amateur in 1962. The 1968 Open drew a record weekly crowd of 20 000, marking double the usual attendance than previous years.


Playing the first tournament of the Open Era was surely something special for its participants. On top of the general excitement, the professional players were under a lot of pressure. It was expected that they would crush the amateurs easily and they felt like they had something to prove. Let’s quote the players themselves, when they were asked by the ATP, in April 2018, to reflect upon this event 50 years later: Rosewall said “there was some thought that the pros would be better than the amateurs and I felt it did lead to a tense situation during the week”, while Rod Laver recalls that “the pressure was entirely on the pros that first week in Bournemouth, as it was an opportunity for the amateurs to show us how good they were.”

During the week, amateur Mark Cox managed to defeat professional Pancho Gonzales (who was 39 and hadn’t played five-set matches since 1959), and a few other amateurs managed to give the pros trouble. However, none of them could compete with players like Rod Laver, who destroyed Cox in the semi-final, 6-4, 6-1, 6-0. Actually, Laver and Rosewall both reached the final without dropping a set, Rosewall outplaying pro Andres Gimeno in the other semi-final, 6-2, 6-1, 6-3. 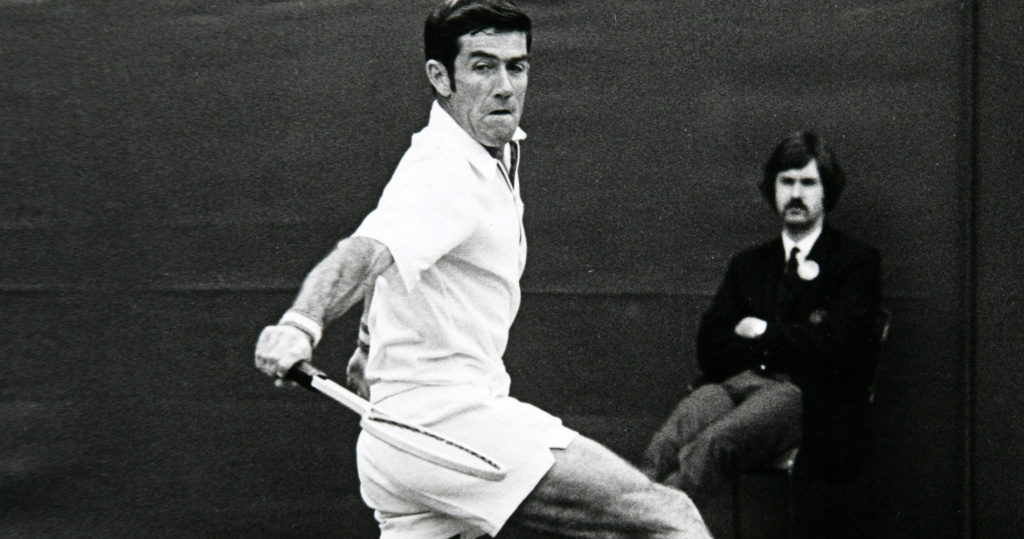 The final started on Sunday, April 27, with the West Hants Club packed to its full capacity of 3,000 spectators. It started in such gloomy weather that the court was slippery, and after winning one set each (6-3 for Laver, then 6-2 for Rosewall), the match was interrupted while Rosewall was up 3-0 in the third set. The Aussies came back the next day, on April 28, to finish the first final of the Open Era with little drama: Rosewall won easily the two remaining sets to seal his victory 3-6, 6-2, 6-0, 6-3.

What next: Rosewall beats Laver for Roland-Garros title

A few weeks after the Bournemouth final, Rosewall also won at Roland-Garros for the first Grand Slam event of the Open Era, beating Laver again in four sets (6-3, 2-6, 6-1, 6-2). Laver would take his revenge there in the 1969 final (6-3, 6-4, 6-3), on his way to his second Grand Slam. “Rocket” would become the only player to have completed the Grand Slam twice and the only one to win all four slams in one year in the Open Era. He is considered as one of the greatest players of all-time and the Australian Open centre court was named after him in 2001.

At the end of their careers, the two Australian legends had played against each other a recorded total of a 164 times, with Laver leading 89-75.

After years of controversy and hypocrisy, professional tennis players could eventually participate in Major events. The public’s enthusiasm for Open tournaments didn’t decrease. During the first years of the Open Era, rivalries raged between different investors, culminating in 1973 with the existence of four different Tours: World Championship Tennis (WCT), the Grand Prix Circuit, the US Indoor Circuit and the European Spring Circuit. This situation lead the players to create a syndicate to defend their best interest: the Association of Tennis Professionals. Through the years, the circuits progressively merged until, in 1990, the ATP Tour was established as the one and only professional men’s Tour.