On Saturday, November 6, 2021, by winning his semi-final at the Rolex Paris Masters against Hubert Hurkacz, Novak Djokovic once again made tennis history. The Serb ensured that he will finish the season as world No 1 for the seventh time in his career. He surpassed the record he held with Pete Sampras (6) and moved a little further away from his two great rivals, Rafael Nadal and Roger Federer (5). 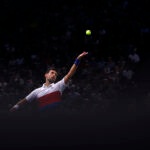 A record year for Novak Djokovic who, in March 2021, became the man who has spent the most time at the top of the world rankings, beating Roger Federer’s 310 weeks. By winning Wimbledon, he also won his 20th Grand Slam title, matching the record held by Roger Federer and Rafael Nadal.

In the latest episode of The Volley, Chris Oddo and guest Simon Cambers discuss Novak Djokovic’s incredible achievement in finishing the year as the world’s No 1 player for the seventh time in his career, just after his victory at the Rolex Paris Masters. 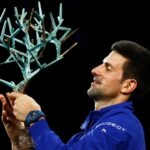 Key moments of our podcast: