Home » News » Covid-19, rain, cold, heavy balls: A Roland-Garros like no other

Covid-19, rain, cold, heavy balls: A Roland-Garros like no other

Moved from May-June to September-October because of the pandemic and with Covid-19, rain, cold and heavy balls to deal with, this year’s Roland-Garros, which begins on Sunday, is like no other. 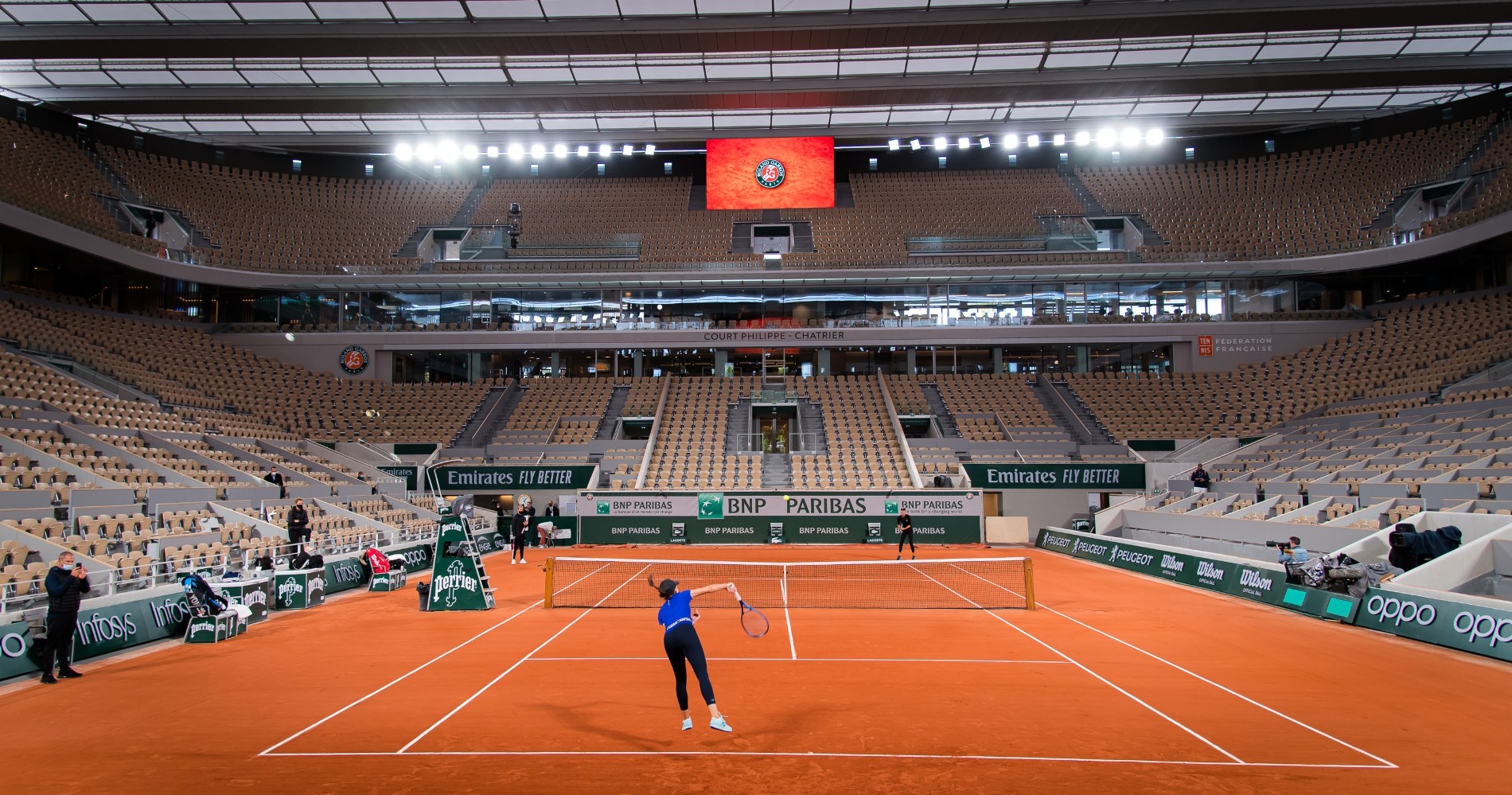 Even with only 1,000 fans allowed in per day and a combination of factors making life difficult for players, everyone is happy that Roland-Garros is happening at all.

But it’s an inescapable fact that there are a number of things that are going to be different this year. Tennis Majors explains what they are and how they might affect the destination of the titles this year.

Initially planned for its usual slot, this year from May 25 to June 7, Roland-Garros was first moved to September 20 to October 4 and then finally to September 27-October 11. The main consequence? The days will be shorter and the sun begins to set from 5pm, with lights required probably from around 5.30pm.

Rain has arrived in Paris and looks likely to stay throughout the fortnight. Météo France predicts rain every day until October 10, the day of the women’s final. On Sunday, the tournament will begin in rain and strong winds, a big headache for the organisers. (see Sunday’s order of play) 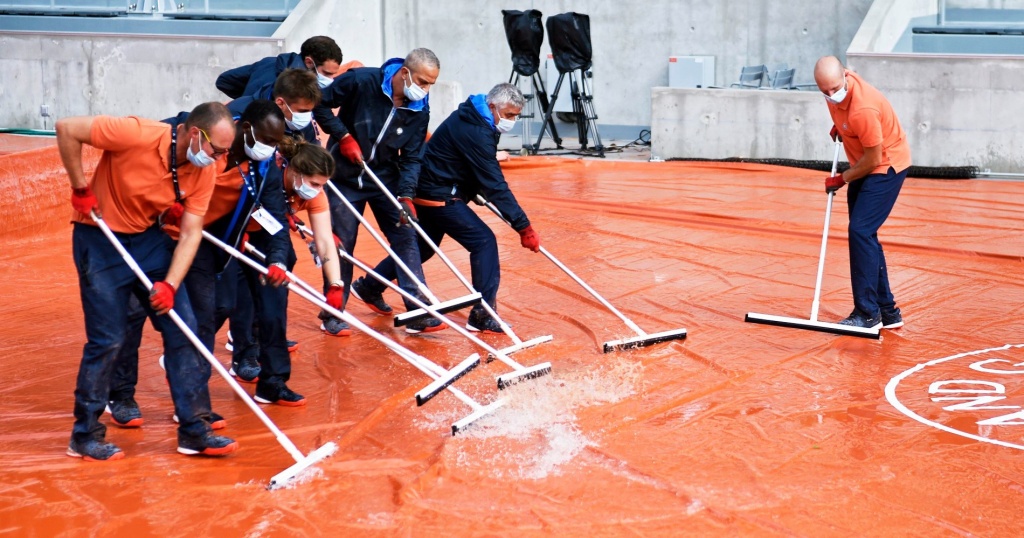 During the fortnight, it’s going to be cold. Don’t be surprised to see the men and women players in long-sleeved outfits and even leggings. In the mornings, temperatures will be between 8 and 13 degrees, and though it might hit 20 in the afternoon, if we’re lucky, players, including Rafael Nadal, expressed their feelings about the fresh conditions they are experiencing in Paris.

« It’s very cold, which makes it difficult for everyone. It’s a bit extreme conditions to play in. The conditions are probably the most difficult I’ve ever experienced at Roland Garros for different reasons. ». »

Rafael Nadal clearly knows that these conditions will not help his game, as Patrick Mouratoglou explained in his special segment, The Eye of the Coach.
‘]

Floodlit courts but not dedicated night sessions (that comes next year)

This is a first: 12 of the 14 courts in use this year have floodlights, which means more matches can be finished than would otherwise be the case. The sun will definitely set by about 7.30pm and the light will be fading in the hour before then, so the lights will help a lot. They will actually be lit from 5:30 pm but strictly speaking, there will be no night sessions (they are scheduled to happen in 2021, with an 8pm start). But this will add a new dimension for those who are scheduled to play the last match on each court.

This is THE great thing that we’ve been looking forward to for many years; Court Philippe Chatrier is finally equipped with a roof. On February 5, the work that began three years ago was completed with the installation of the last wing, the 11th, in homage to the aviator, Roland Garros.

“In May 2017, we took up the challenge of rebuilding the Philippe-Chatrier court in three years with a retractable roof,” said Bernard Giudicelli, President of the French Tennis Federation (FFT). “This magnificent tool illustrates our audacity and our constant desire to build and innovate.

The roof will take 15 minutes to fully close. (it only takes 10 minutes on Wimbledon’s Centre court). These “indoor” playing conditions are totally new at Roland Garros. Moreover, in case of persistent rain, the tournament could be open to claims of favouritism, if it allows the big names to play under the roof and not have to deal with the conditions. It is also customary for the stars to play at least one match on the Court Suzanne-Lenglen during the fortnight. This might not happen this year, by default.

There’s a new sponsor for Roland-Garros this year. After nine years with Babolat, the balls will be provided by Wilson, who have the contract until 2025. And it seems the balls the players are going to be using this year are not to everyone’s taste. Rafael Nadal – who uses Babolat racquets – made that much clear on media day on Friday.

“I think it is not a good ball to play on clay, honestly,” he said. “That is my personal opinion. Is not the right ball to play on clay court. Even with these conditions makes the things tougher, no? But I knew before arrived here. No problem at all. Just accept the challenge. I really believe that the organisation need to take a look on that for the next couple of years, for the health of the players, too, because the ball super heavy becomes dangerous for the elbow and for the shoulders, I think. »

Novak Djokovic was more measured in his assessment.

“This is the first time we have used these balls on clay (and) I agree, the balls are heavy,” he said. “But it’s October, it’s very cold and the clay court is heavy and wet. The general conditions also affect the nature of the ball itself. It is difficult to say whether the ball is heavy by nature or whether it is the fact of playing in these particular conditions.”

A sword of Damacles named Covid-19

The Coronavirus pandemic has shaken up the tennis world. At Roland-Garros, there does not seem to be a true “bubble” to speak of, at least not as there was at Flushing Meadows, for the US Open. The players are placed in two hotels reserved by the organisers but they’re not completely private, it seems, meaning players run the risk of mixing with people from outside.
Players will be tested every five days. If any player tests positive their accreditation will be deactivated and they will be removed from the tournament. This is what happened to Fernando Verdasco, who was furious with the tournament for not allowing him to have a second test. It also happened to Damir Dzumhur, who was not allowed to play in the qualifying event after his coach, Petar Popovic, tested positive. The protocols of the FFT are considered to be very strict, too strict perhaps with people who have developed antibodies, and the four cases recorded at the beginning of the tournament.

Players will only be allowed to enter the stadium on the days when their match is scheduled. And it will be impossible to train on site during the fortnight: the Jean-Bouin stadium, located nearby, will be dedicated to them. Finally, participants will have to wear their mask at all times, except when playing and eating. This is also the case for all accredited persons: referees, ball collectors, tournament organisers and media.

Maximum of 1,000 fans allowed each day

Accustomed to having close to 40,000 spectators every day, Roland-Garros will have no more than 1,000 fans per day, because of health restrictions.. The organisers had hoped to have 20,0000. In September, the site was separated into three zones – court Philippe-Chatrier, court Suzanne-Lenglen, court Simonne-Mathieu – independent from one another, with a total of 11,500 spectators. It was not quite the closed shop of the US Open, as it seemed when Prime Minister Jean Castex had first spoke of the new restrictions this week, but the place will sound pretty hollow all fortnight.

There are certainly fewer absentees than there were at the US Open but, especially in the women’s draw, a few top players will not be playing at Roland Garros. World No 1 and defending champion Ash Barty has decided to skip the tournament. The winner of the 2019 US Open, Bianca Andreescu (No 7), will also not be present through injury and Naomi Osaka, the recently-crowned US Open champion, is also not in the field. More recently, Belinda Bencic (No 10) also withdrew. Four players from the Top 10 are therefore to be classified in the big absentee category.

In the men’s draw, only one of the top 10 are not here but it’s not just anyone, it’s Roger Federer (No 4). The other big names absent include two Frenchman (Jo-Wilfried Tsonga et Lucas Pouille), one Australian (Nick Kyrgios), one Canadian, (Milos Raonic) and one Spaniard (Verdasco), who tested positive for the Coronavirus when he arrived in Paris, and will not be part of the field.

The worldwide spread of the coronavirus stopped the season in mid-March. Back in early August, tennis made a stopover either in the United States, for a month of hard court tournaments – including the Masters 1000 in Cincinnati and the US Open, both of which were played in New York – and in Europe with clay court tournaments in Palermo, Prague, Istanbul, Rome and Strasbourg on the WTA Tour; Kitzbühel, Rome and Hamburg on the ATP Tour.

The transition from hard courts to clay courts was very quick for those who played in the US Open: only two weeks separated the two Majors. Dominic Thiem, the winner of the US Grand Slam, didn’t play any warm-up tournament before arriving at Roland-Garros.

On the other hand, Rafael Nadal, forfeit at Flushing Meadows, quickly devoted himself to clay with one goal: to win a 13th title at Porte d’Auteuil. Beaten in the quarter-finals of the Masters 1000 in Rome by Diego Schwartzman, the Spaniard arrived in Paris without a title on clay before Roland-Garros, something that has happened to him only once since 2005; in 2015, when he was knocked out by Djokovic in the quarter-finals. Djokovic, who was disqualified in the round of 16 at the US Open, won the Masters 1000 in Rome.