Day 8 of Roland-Garros was an interesting one, highlighted by an all-time classic match between Dominic Thiem and Hugo Gaston, as well as Simona Halep’s fall. 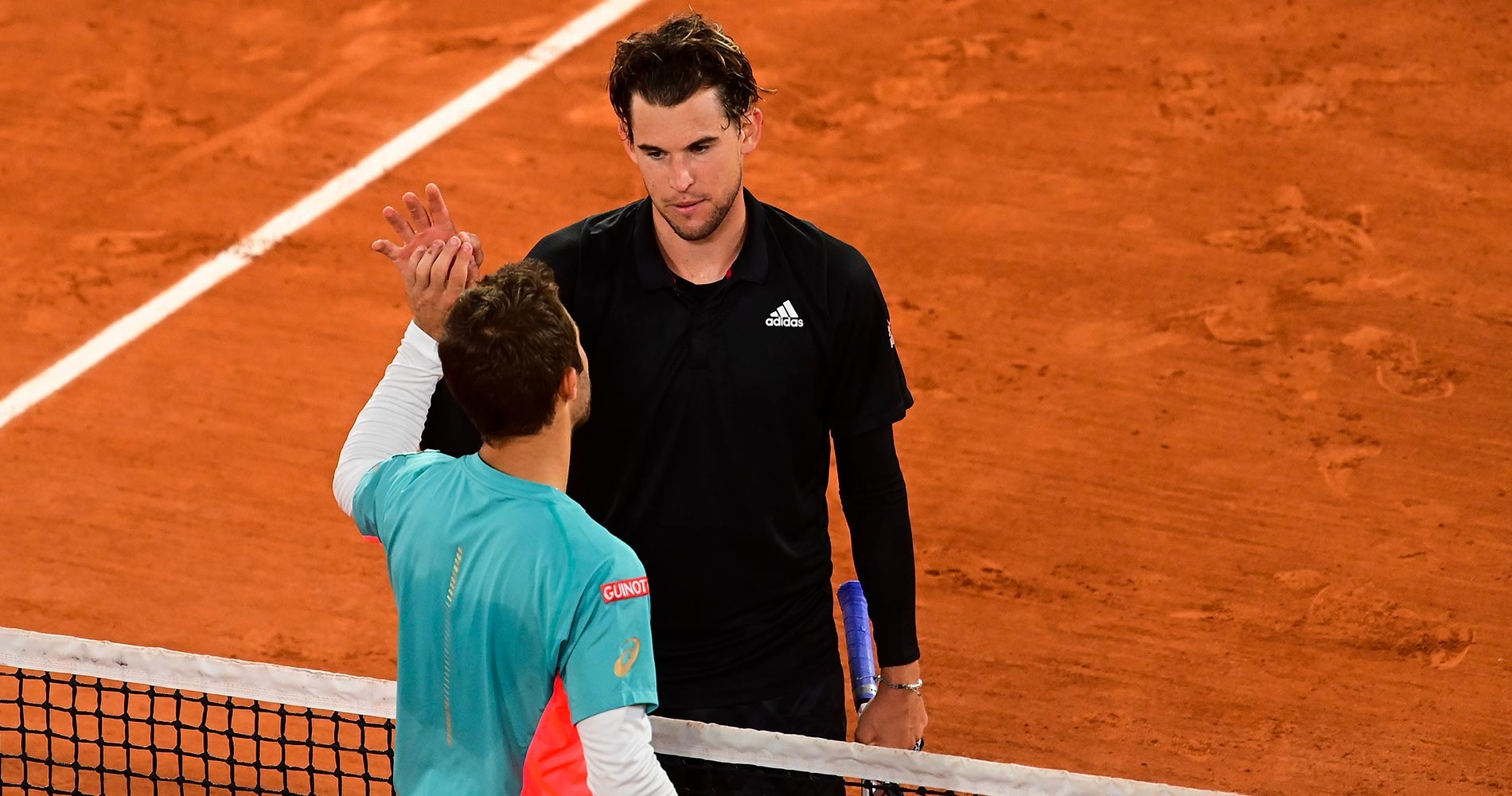 Although Dominic Thiem struggled, other top seeds made it through the fourth round with relative ease. The likes of Rafael Nadal, Diego Schwartzman, and Elina Svitolina booked their places in the quarter-finals without any trouble.

Here’s how the draw currently stands on the men’s and the women’s sides.

What a performance by the young Frenchman. Despite falling behind two sets against one of the hottest players in the tour right now in Thiem, Gaston didn’t give in. He had the limited home crowd behind him and clawed all the way back, but ultimately fell short.

The Frenchman received an ovation from the Paris crowd as he departed the court.

The count of top-30 players left in the draw fell to just three as the upset bug hit Simona Halep. Iga Swiatek literally played the match of her life, allowing zero break points in her service games and broke the first seed four times en route to a 6-1, 6-2 victory.

The 30-12 winner count probably is the most telling stat of how the match went, as well as Halep winning only 53 percent of her first-serve points.

Match of the day: Thiem and Gaston — instant classic

The fun part about this match is how close it was. Every single set was separated by a single break with both players working within the finest of margins. Thiem was up 6-4, 6-4 when Gaston shifted gears in his play, claiming two sets by the score of 7-5 and 6-3 and breaking the world No 3 in the final game of the third set.

However, it was Thiem who was able to steady the ship and break to go up 5-3 in the fifth and served the match out after fending off a break point.

This match was a nailbiter from start to finish.#RolandGarros pic.twitter.com/v0ygYMojsM

News of the day: The mishandling of Sascha

A curious case arose with Alexander Zverev today. He definitely did not look like himself in his four-set loss against Jannik Sinner, and the German commentary crew hinted that he’s been under the weather the past few days.

After the match, though, Zverev admitted to having a 38-degree fever following his match against Marco Cecchinato, while also struggling to breathe throughout the match. This drew a lot of criticism of how Roland-Garros is handling this situation, especially allowing him to play with a fever.

Surprise of the day: Sinner the winner

Preying on his opponent’s struggles, Italian youngster Sinner continued his dream run at Roland-Garros. Despite serving up 56 unforced errors, Sinner almost doubled Zverev in the winners column with 39.

He was also clinical when handling the breaks, only allowing Zverev to convert two of eight while converting five of six himself. The 6-3, 6-3, 4-6, 6-3 victory matches him up with Rafael Nadal in the quarter-finals.

We all learned about how Sebastian Korda idolises Nadal in his recent press conference — going as far as naming his pet cat after the King of Clay.

He didn’t get the result he wanted against Nadal, but at least he got a souvenir to commemorate the event.

“To my friend Sebastian, all the very best in your tennis career.” #RG20 pic.twitter.com/fUpDKbwqQt

Point of the day: This Gaston backhand passing shot

This. Just watch this. Put this on loop. Put this in the Louvre. The slide, the reach, and the angle of the shot. On a match point. Just wow.

Quote of the day: F is for friends who do stuff together

With Thiem and Schwartzman both winning their matches, the friends are set for a quarter-final clash — and they had some fun jabbing at each other.

“I’m happy of course to face one of my best friends from the tour in the quarter-finals,” Schwartzman said. “After [Thiem’s match] I was on the bike stretching. After that, Domi arrived and we were kidding, ‘Okay, this is the last time we talk each other until Tuesday.’ He was [motioning] like he was going to hit me in my legs. But nothing happened. Yeah, just a smile.”

The quarter-final matchups will be locked up by the end of day 9, with Fiona Ferro closing out Chatrier as the only French player left.