Every day, Tennis Majors takes you back in time to relive a tennis event which happened on this specific day. On July 4, 1999, Pete Sampras produced one of the most brilliant displays of his life to beat Andre Agassi in the Wimbledon final. 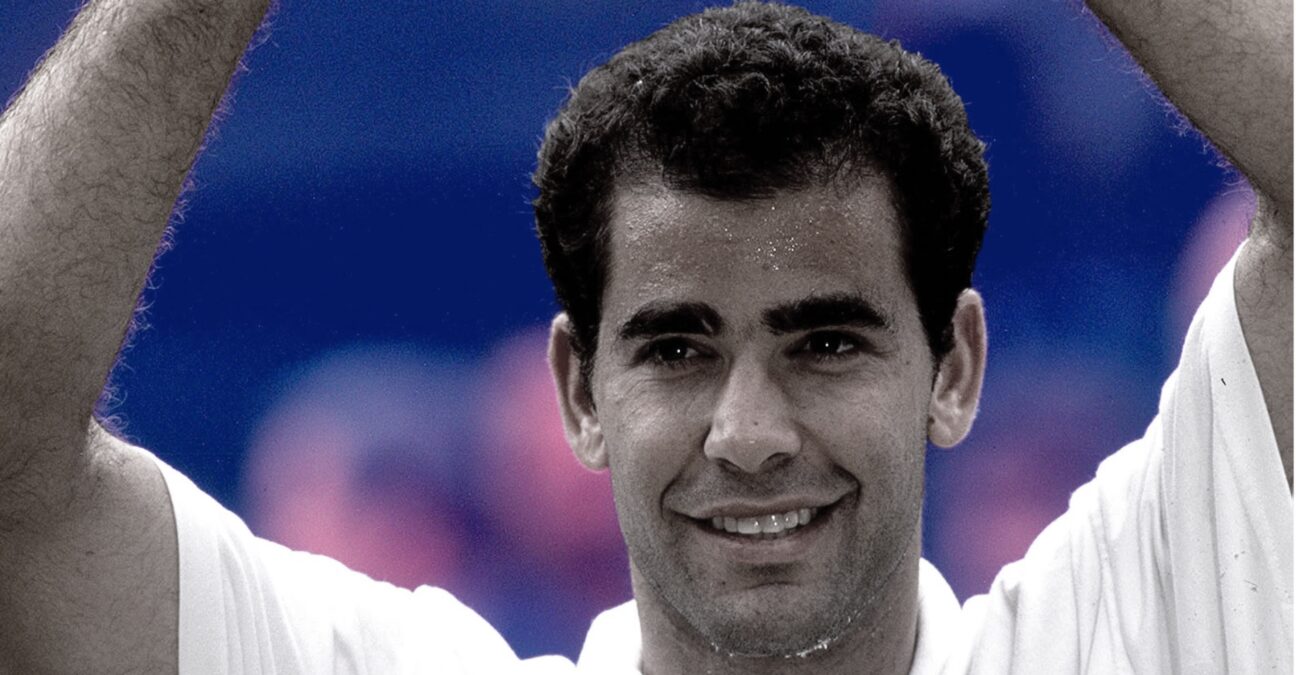 On this day, July 4, 1999, Pete Sampras produced a masterful performance in the final at Wimbledon to beat his life-long rival Andre Agassi, 6-3, 6-4, 7-5. At this time, it was an important achievement for Sampras, who’d had a complicated first half of the year, while Agassi, who had just won Roland-Garros for the first time, was full of confidence. Although it was already the sixth triumph for the Californian at the All England Club, Pistol Pete himself would always consider this one as more special than the others: “That Wimbledon stands out a bit more because of my opponent, and because of my history with Andre, and because of the contrast between how I played and how he played.”

Andre Agassi, the Las Vegas Kid, was also a tennis legend. He had turned professional in 1986 and soon became one of tennis’ biggest superstars, thanks to his amazing tennis skills but also to his outfits, including the iconic denim shorts and the pink bicycle shorts (worn underneath). Taught by his father and bred at the Nick Bollettieri Academy, his game relied on a great return (the best of his time) and on hitting the ball on the rise on both sides with incredible power, which was revolutionary at the time and then copied by generations of tennis players. After finishing runner-up in three Grand Slams, once at the 1990 US Open and twice at Roland-Garros (1990 and 1991), he claimed his first Grand Slam title at Wimbledon in 1992, defeating big server Goran Ivanisevic in the final (6-7, 6-4, 6-4, 1-6, 6-4). This title was followed by the 1994 US Open and the 1995 Australian Open, the only time he beat Sampras in a Grand Slam final (4-6, 6-1, 7-6, 6-4). He became world No 1 shortly after, on April 10, 1995, for 30 weeks. In 1996 and 1997, despite a gold medal claimed at the 1996 Olympic Games in Atlanta, Agassi had a very hard time and his ranking dropped as low as No 141. Displaying great humility, he went back to play on the Challenger tour at the end of 1997 to regain confidence. He slowly came back to the top in 1998, finishing the year as world No 6, although his Grand Slam results were disappointing. In June 1999, he eventually triumphed at Roland-Garros, edging Andrei Medvedev in five sets (1-6, 2-6, 6-4, 6-3, 6-4), thus achieving a career grand Slam.

The place: Wimbledon and his intimadting Centre court

Wimbledon is the oldest and the most prestigious tennis tournament in the world. Held by the All England Lawn Tennis and Cricket Club since 1877, it moved into its current location in 1922, the same year when the Centre Court was built. Considered by many as the most intimidating court in the world, with its famous Rudyard Kipling quote above the entrance (“If you can meet with triumph and disaster and treat those two impostors just the same”), the Centre Court had seen the best players of all time competing for the title. After the US Open switched to clay and then hard court in the 1970s, and after the Australian Open switched to hard court in 1988, Wimbledon remained the only Grand Slam tournament to be played on grass, a surface that is usually more suitable for serve and volley players. Not only did Wimbledon keep its surface, but it also maintained old-fashioned traditions such as the white dress code.

A match between Pete Sampras and Andre Agassi was always something special. The two Americans had been rivals for a decade, when Sampras defeated Agassi in the final of the 1990 US Open. Their rivalry peaked in 1995, when they fought for world No 1, facing each other in three Masters 1000 finals and two Grand Slam finals: Agassi had prevailed in Australia and Sampras took his revenge in New-York. By 1999, Pistol Pete had won 12 of their 23 encounters.

This new episode of the Sampras-Agassi saga happened in a particular context. Sampras, who had dominated the tour for years, had played a first half of the season far below his usual standards and his world No 1 spot had been challenged by several players already. Meanwhile, Agassi, after almost three years of struggling with motivation, was reborn a few weeks before Wimbledon when he won Roland-Garros. He would have been the favourite in any other place than Wimbledon, but here he was facing the best grass court player of the decade. As a warning, the Californian had won his first title of the year at the Queen’s Club, proving that he could never be counted out on grass.

In this all-American 1999 Wimbledon final, scheduled on Independence Day, Pete Sampras produced a performance that he would himself consider as “close to perfection”. His serve was lethal, his game at the net flawless, and even from the baseline, he was often stronger than Agassi. As he claimed the first set, 6-3, the Las Vegas kid was waiting for his chance, hoping for the storm to pass, but unfortunately for him, the storm got worse. Years later, on the Wimbledon website, Sampras said: “From that point on, for the rest of the match, I really just got into the zone. I was moving well, I was serving well. My returns, my baseline game, everything just clicked.”

Andre was standing there for five seconds as if to say: ‘You know, this guy is too good.’

Sampras recalled one point in the match, that sums up why Agassi would later say that he felt “as though he ran into a bus”: “I remember one point when I hit a diving volley. I remember seeing a replay of that and Andre was standing there for five seconds as if to say: ‘You know, this guy is too good’.”

As strong as Agassi could be, there was nothing he could do to prevent his rival from claiming his third consecutive Wimbledon crown, his sixth in all. Even Sampras himself seemed surprised by the level he had reached that day: “To be able to play that well in the final of a major, I just can’t explain it. It’s very rare, because of the nerves and the match-up.”

What next: Sampras will continue to dominate in the rivalry against Agassi

Despite his exquisite performance in the final of Wimbledon, Pete Sampras would lose his world No 1 spot to Agassi in 1999. Although the Las Vegas Kid would claim the US Open crown, Sampras would once again deprive him of a complete triumph by beating him in the final of the Masters Cup (6-1, 7-5, 6-4).

November 25, 1999: The day Agassi received the ATP Tour trophy for finishing the year as world No 1
tennis majors

When Sampras retired, he would lead 20-14 in what would remain as the most iconic rivalry of their generation.