Home » News » US Open Day 4 recap: Emotions are boiling over in the bubble

US Open Day 4 recap: Emotions are boiling over in the bubble

Garbine Muguruza crashed out of the US Open on Thursday, and she wasn’t happy about it. Dominic Thiem wasn’t happy for a very different reason. 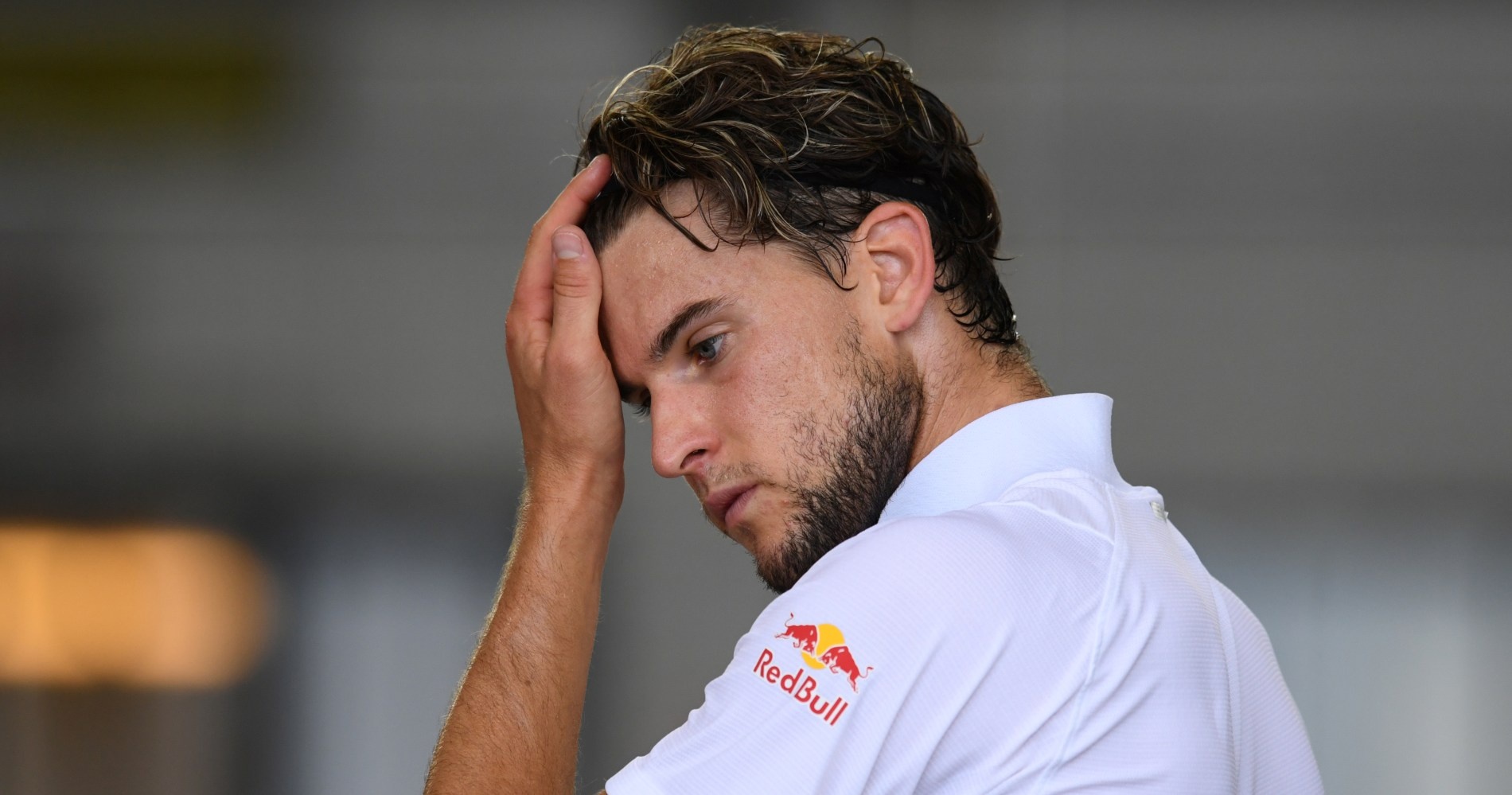 If players are lucky, they still have ten days to go inside the US Open bubble at the Billie Jean King National Tennis Center. That, of course, would mean that they reach the final. Will any of them be able to last that long? We are only four days into the tournament and safety protocols, activity restrictions, and controversies (see: the ‘Paire 11’) are already taking their toll. Tempers were flaring throughout Day 4 in New York — both on and off the court.

The woman of the day: Azarenka on a roll

Victoria Azarenka means business these days. The recent Cincinnati champion is showing no signs of slowing down, as she destroyed fellow Belarusian and No 5 seed Aryna Sabalenka 6-1, 6-3 on Thursday night. Azarenka lost to Sabalenka in the first round last summer, but she is obviously a much different player this time around and buoyed by the Cincinnati title.

“To be honest, I haven’t really looked that much to last year,” she said of her 2019 US Open match against Sabalenka. “I think it was a little different circumstances for me. I think what I took out from that match was a little bit of understanding of her game, because it was the first time that we played. We played against each other in doubles, but of course it’s a different view of the player. So I think that I was maybe a little bit more aware of the game, but I didn’t really look back too much. I think, you know, last year I was winning and then I was up, and then I kind of lost the momentum.

“I think today was really solid, obviously. I felt like I stepped on the court and I was really making her earn every single point that we played. That was my goal to be really, really strong. If you hit a good shot, it’s a good shot, but I’m going to make you work a little harder…. I was really steady throughout the whole match. I just would like to continue to keep going in that direction, because that works. You know, I’m happy with the way I moved today. I think that I got to a lot of balls. And closing out the match was also really important, because in this moment you never know what can happen.”

The man of the day: Marton the warrior

It took four hours and 50 minutes to separate Marton Fucsovics and Grigor Dimitrov. In the end, Fucsovics was the last man standing. It marked the Hungarian’s second victory over Dimitrov in the bubble, as he also defeated the Bulgarian in a deciding set at the Cincinnati Masters.

The match of the day : Konta crashes out

There was a marathon on the women’s side, as well. No 9 seed Johanna Konta lost to Sorana Cirstea 2-6, 7-6(5), 6-4 and the match lasted two hours and 50 minutes. Konta actually won 111 total points to Cirstea’s 100, but it was the Romanian who won most of the big ones in the second and third sets.

“Well, my opponent played better than me,” the Brit said matter-of-factly when asked to explain her loss. “I think that’s really about it. I obviously started better. I think my level was a lot higher than hers in the first set. But she’s a great player. she’s had some pretty amazing results also in the past in her career. She’s capable of playing some very good tennis. She obviously raised her level. We were battling kind of toe-to-toe really. She just was better in the end.”

Milos Raonic was a huge favourite in his all-Canadian contest with Vasek Pospisil — an even bigger one than his No 25 seeding would suggest. After all, Raonic was coming off a runner-up performance at the Cincinnati Masters. Nonetheless, Pospisil played what has to be considered one of his best matches ever and upset Raonic 6-7(1), 6-3, 7-6(4), 6-3.

“I feel amazing,” the world No 94 assured. “I have struggled with back issues through the last three to four years and honestly, this is the best I have felt since 2014 on the court in terms of my body being healthy so yes, the sky is the limit, and if all is good out there I can just focus on what I need to improve and try to keep the body healthy.” 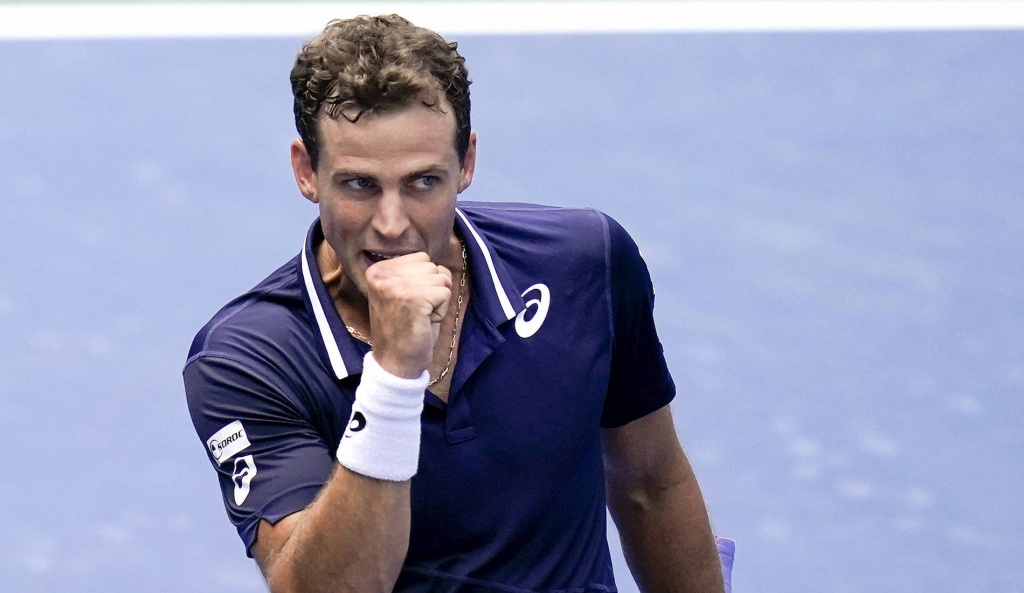 The picture of the day: Muguruza mad

Tsvetana Pironkova, a mother of one who was out of the game for three years, pulled off the biggest upset of the day by beating Garbine Muguruza 7-5, 6-3. Although Pironkova was the story, Muguruza made some headlines with an epic racket smash after losing the first set. The No 10 seed completely decapitated her stick in frustration.

The awkward walk to pick up the rest of your racket after executing one of the best and cleanest racket smashes ever #muguruza #USOpen pic.twitter.com/WCUTijcHN2

Garbine Muguruza is so much powerful

The quote of the day: Can we do this all the time?

Sloane Stephens crushed Olga Govortsova 6-2, 6-2 on Thursday afternoon. But that wasn’t her favourite part of the day. The American’s favourite part was the post-match press conference — usually not her favourite part. Press conferences are held via Zoom meetings during these days of the coronavirus pandemic, and therefore they generally do not last as long as normal. Stephens’ second-round presser lasted all of five questions. And she was quite happy about it when she left the interview room.

“Oh my God, can we do this all the time?!?! That was like four minutes. This is the best part of the tournament by far!”

Perhaps it gives her extra time to prepare for Saturday’s showdown against Serena Williams.

The point of the day: Marathon men

The first four sets alone between Fucsovics and Dimitrov lasted more than four hours. Nonetheless, they weren’t just producing high-quality tennis in the fifth — they were producing perhaps the best point of the entire tournament. That makes this effort all the more remarkable. The whole highlight reel is worth a watch, but fast forward to the 2:00 mark for the especially amazing point.

This point had it ALL 🤯

But much like the match, Marton Fucsovics came out on top 💪#USOpen pic.twitter.com/i1OICtCxeG

As for the shot of the day — and the tournament — well…here you go:

Matteo Berrettini hits the shot of the tournament thus far as he goes around the net against Humbert 😱 pic.twitter.com/IamGYGbv5c

While Muguruza was not happy about her tennis, tempers also flared for different reasons at the Billie Jean King National Tennis Center. Dominic Thiem was scolded for having a Red Bull brought to him during a changeover while he was busy beating Sumit Nagal 6-3, 6-3, 6-2.

Thiem is PISSED off because he was not allowed to drink straight from the Red Bull-can.

Dominic Thiem on the Red Bull incident. I think it is completely reasonable. pic.twitter.com/iuJuofaZS8

Thiem’s ex-girlfriend Kristina Mladenovic also wasn’t happy. After suffering an epic collapse against Vavara Gracheva, the Frenchwoman complained about life in the bubble.

“It’s like we are prisoners, or criminals…For even the slightest movement, we have to ask permission even though we are tested every day and had 37 negatives.”@KikiMladenovic is speaking out about the strict requirements she’s facing at the US Open.https://t.co/4RcOEaEOvv

Add Kirsten Flipkens to the list of players who aren’t overly enthused about bubble life. The Belgian is trying to get out of town after losing to Jessica Pegula 7-6(1), 6-7(3), 6-3 on Wednesday. But…not so fast! 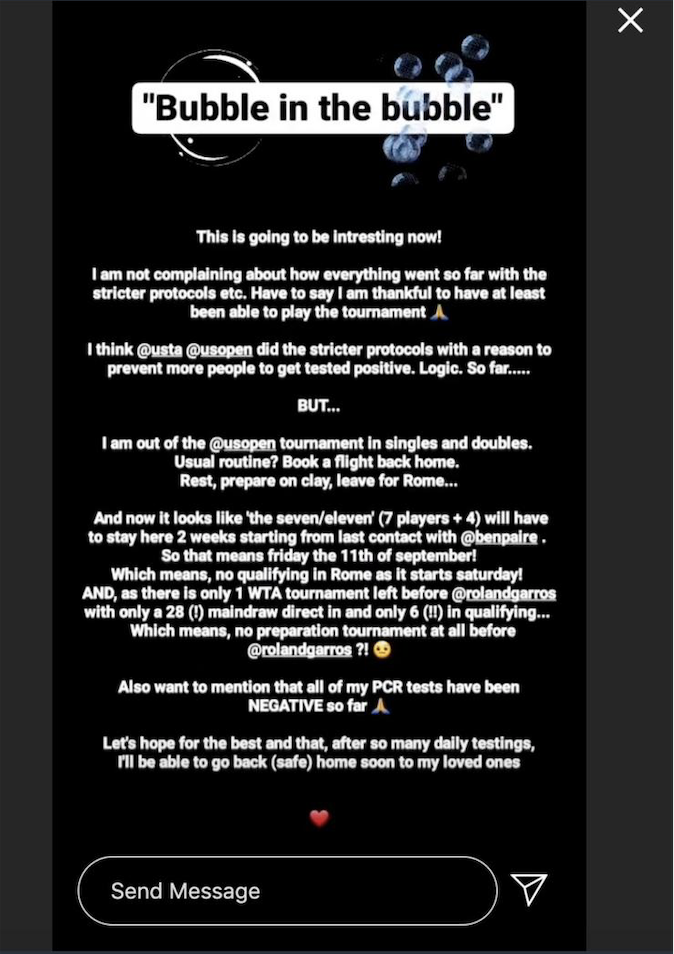 We are now into the realm of the tournament when seeded players can go head-to-head. And that is exactly what will happen in more than a few cases on what should be an entertaining Friday at the Billie Jean King National Tennis Center. There won’t be any fans there to enjoy it, of course, but eating popcorn on the couch in front of the nearest television would be a good idea for any tennis fan when it comes to this line-up of matches. The following are some of the most intriguing Day 5 match-ups (and full order of play here):