Richard Gasquet steamrolls past Feliciano Lopez in a winner-take-all Group A showdown at UTS2 on Saturday. That means the semifinal field features Gasquet, Corentin Moutet, Alexander Zverev and Felix Auger-Aliassime. 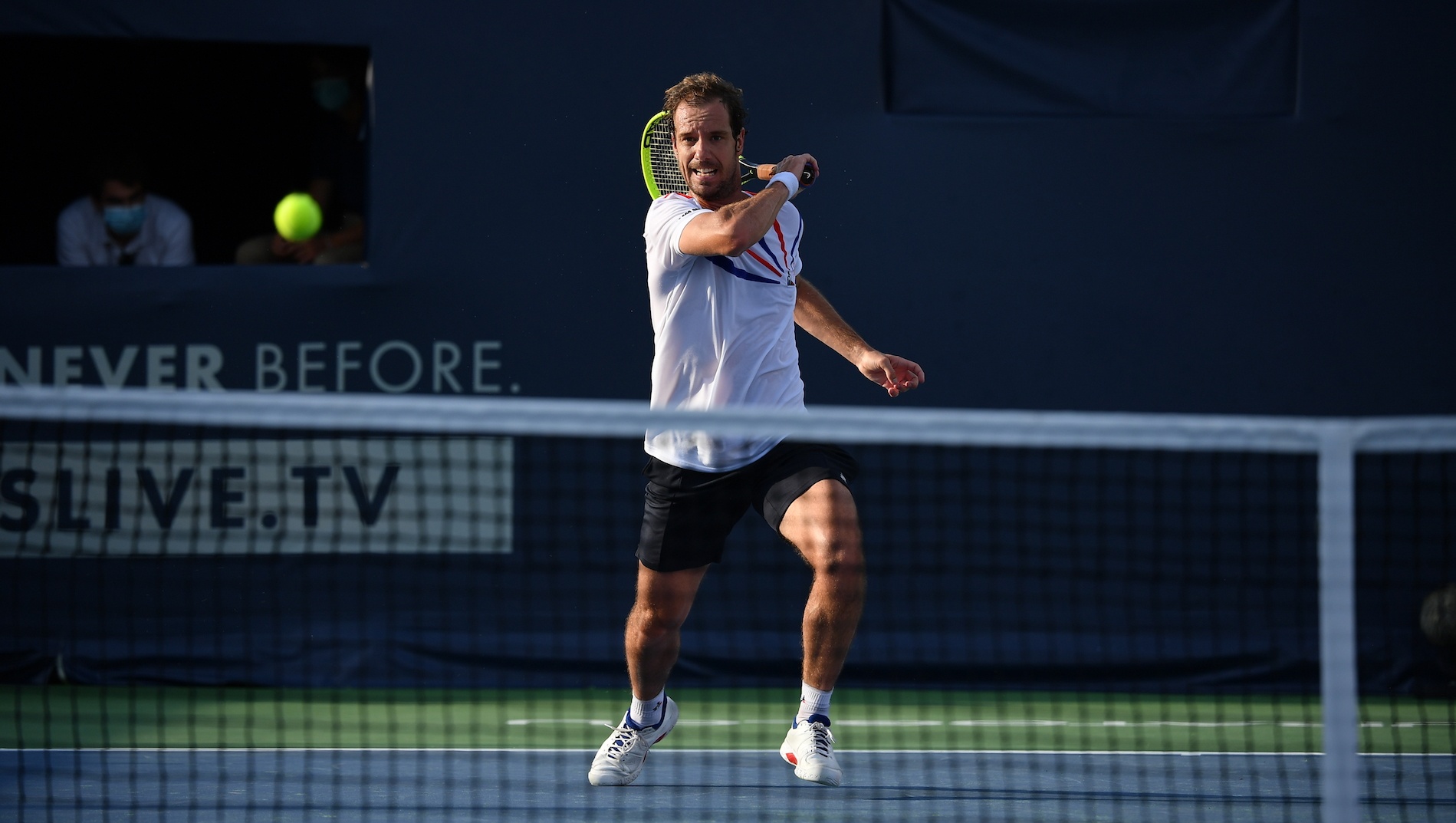 Richard Gasquet, a semifinalist at UTS1, punched his ticket to the same stage at UTS2 by defeating Feliciano Lopez on Saturday afternoon. A battle between previously undefeated players atop Group A was one-sided the whole way, as The Virtuoso ended all suspense by dominating each of the first three quarters.

Gasquet and Moutet top Group A and B respectively to complete tomorrow’s Final Four line-up!

The winner of Zverev v. Auger-Aliassime (to be played next) will get to pick their semifinal opponent – who’d you pick? pic.twitter.com/52MQPDE4xQ

Gasquet leads his head-to-head series with Lopez on the main tour by a 7-1 margin, and he also won their UTS1 encounter – albeit in sudden death. Surely confident against this particular opponent, The Virtuoso made sure this contest was not as competitive as the one last month. He jumped all over Lopez right away, seizing control of the first quarter when he came up with a forehand winner in a next point counts two situation at 9-7. Gasquet took care of business the rest of the way for a quick 1-0 lead.

“It was a good first set,” the Frenchman assessed. “It’s always important to win the first one. I know his game; he knows mine. We are close friends; we have played many times. But in UTS anything can happen.”

“It’s very hot,” Lopez said. “But I think I played really bad – especially on my serve, I wasn’t feeling good. I need to play better; I need to raise my level. If I play well I will have chances.”

But there was no chance for El Torero on this day. With heavy legs and an unrelenting opponent, Lopez fell into another quick hole at 6-2 in the second quarter. However, he used his cards expertly to get back on even terms. In fact, seven of the 38-year-old’s first 11 points in the quarter came while a card was in play – including an ace on a second serve with a winner counts three card for 11-11. Gasquet answered with a card of his own, though, winning two straight points that counted double to seize a 15-11 advantage. There was no coming back for Lopez this time, as The Virtuoso ran away with the second quarter for a commanding 2-0 lead.

The Virtuoso @richardgasquet1 is so close to grabbing that last Final Four spot, he can almost taste it.

“We play in Australia, Miami…this kind of weather; so it’s not too bad,” Gasquet explained. “Two perfect quarters, so I need to do another one.”

“He (coach Marc Lopez) wants me to focus on my serve for the moment,” El Torero noted. “Focus on my own serve. Win those two points, and that’s it. I need to serve better to get the score in a good position to do something.”

The Virtuoso once again started strong in the third quarter. Lopez’s last chance came when he was already trailing 8-4, at which point he implemented a next point counts two card. Winning both would have brought him level at 8-8, but instead El Torero lost each one to trail 10-4. Gasquet smelled blood in the water and kept his foot on the gas, capitalizing on a next point counts two card of his own for a 13-5 advantage. That all but wrapped up the proceedings.

“To win 3-0 against Feli, you have to play well,” Gasquet said. “I’m not missing. I’m ready; physically I’m good. I’m feeling great. It was a great match for me and I hope I can play well in the semis.”

“It’s not the right time to ask me [about UTS as a whole],” a disappointed Lopez joked. “But I played 12 matches, I think, counting this one. It was a great opportunity for me.”

Gasquet joins Group B champion Corentin Moutet in the semifinals. The two automatic semifinalists, Alexander Zverev and Felix Auger-Aliassime, will face each other in their first UTS match on Saturday night. The winner between The Lion and The Panther will get to handpick his opponent for the semis – either Gasquet or Moutet.