Feliciano Lopez won through in one of the most bizarre, yet entertaining matches of Ultimate Tennis Showdown, overcoming a volatile and injured Benoit Paire 15-17, 22-11, 9-7, 24-14. 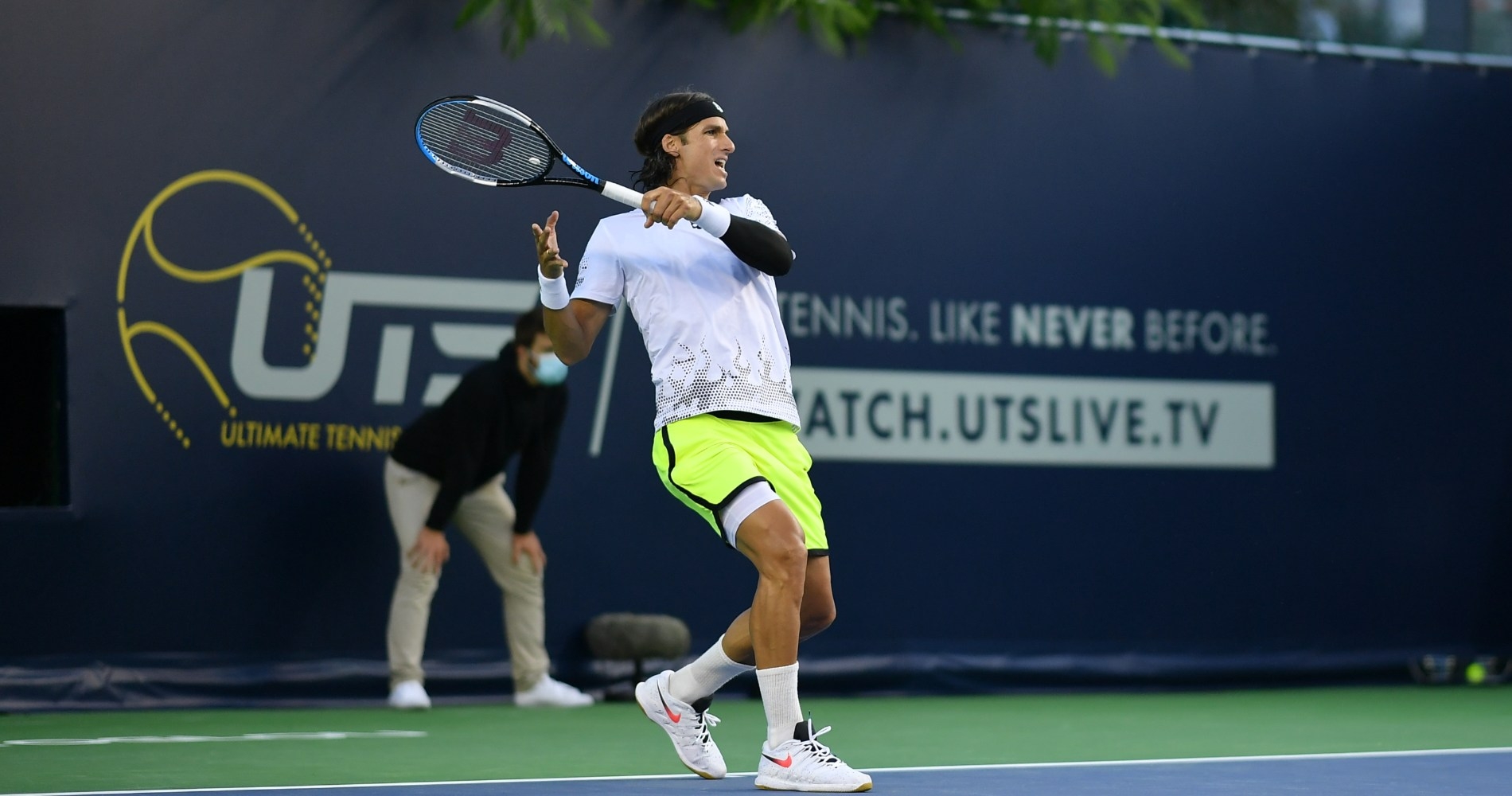 Victory for Lopez means he now stands at three wins from three losses and moves to sixth in the round-robin event with three matches to play. For Paire, his tournament may be now be over, with the extent of his late knee injury yet to be known.

On paper, this was another match-up to savour, two-time Queens singles champion Lopez pitching his attacking serve-volley game against the unpredictable but equally attacking game of Paire. And it quickly developed into a UTS classic both for the tennis in the antics, The Rebel living up to his nickname in venting his fury at line calls and Umpire in equal measure.

As always, in this exciting new format of tennis, picking the time when to play the vitally important ‘UTS Cards’ was going to be a key aspect to the match. This time, both players opted for the most popular Steal Serve and Winners Count x3 cards.

Paire had started the tournament in fine form, beating Dustin Brown and Corentin Moutet 3-1 but then lost his way with successive bagel losses to Matteo Berrettini and Alexei Popyrin. And The Rebel got off to another solid start, racing to a 6-1 advantage to force El Torero’s hand into Steal Serve.

Then, at 3-9 down came successive Winners x3 aces from Lopez, prompting a predictable Paire explosion, two balls launched out of the stadium. In regular tennis, such shows of emption would warrant warnings. But in UTS, shows of emotion are encouraged in order to add to the spectacle and to get the players to channel their emotions.

Paire’s mood wouldn’t have been helped by another Lopez return winner, The Rebel venting his fury at the referee during his first coaching timeout. A way of channelling that frustration is to serve big, Paire banging down a Winners x3 of his own to claw his way back and level at 14-14 in a mesmerising opener.

All cards expended, this was now a straight shot out for the quarter, but it was The Rebel who somehow kept his composure to serve an ace on the final point

“What is this! Every time the same. The ball was out by two metres and he says good,” said a still upset Paire at the change. “Three points. It was 9-3 for me. Happy because yesterday was bad on my serve. Today is much better. The only thing is I need one more chair umpire. I was angry because it is important to me, this week.”

Quickly warming into one of the most intriguing matches of UTS, both players were hitting volleys at the start of the second that Becker, McEnroe, Edberg or Cash in their prime would have envied. For Paire, it was a case of one set McEnroe another Edberg, in terms of mood swing!

As in the first, Lopez quickly established a comfortable lead, using variation of speed and spin to take rhythm away from his opponent.

Rebel yells himself out of contention in second then injures knee

Then another brain fade from Paire, The Rebel becoming engaged in a net exchange on Lopez’s Winners x3 card, when he would have been better served blasting the ball anywhere. Another x3 ace equalled another Paire explosion, the Frenchman again challenging the line call.

This time, the demon on Paire’s shoulder worked against him, allowing the calm and collected Lopez to cruise to an easy 22-11 quarter with an underarm serve winner.

“We are putting on a good show, huh?” joked Lopez at the change. “I’m very happy, it seems that this card is working today! I am playing good in general. I had a very bad start to the match, took the lead by five or six points and after that started to play better so I need to be focused on my serve, keep holding my serve and look for my chances.”

The beauty of Paire is that nobody can predict what will happen next, the volatile Frenchman calling a Winners x3 card right at the start of the third quarter, and again being angered by a marginal line call. Then a mistake from Lopez, calling his Winners x3 on the Paire serve, when he thought it was his own. The Rebel getting into his head, perhaps?

The duo may have been ranked eighth and ninth in the standings, but this was developing into one of the most intriguing matches of UTS before Paire appeared to jar his knee in hitting a backhand.

Taped up and ready to attack the 4th quarter 👊@benoitpaire is back on court after a medical timeout, and will try to push @feliciano_lopez to a sudden death.

The resulting injury time-out meant that Paire would forfeit the quarter, but with Paire now knowing he had to hit winners with his hampered movement, it seem to affect the Lopez tactics – the Spaniard sitting further back behind the baseline.

But successive Winners x3 aces from The Torero took the wind out of a wounded Paire, and a highly entertaining encounter eventually fell the way of the Spaniard. Even a victory may not have been enough for the Frenchman, but it now seems certain that he will limp out of the tournament with his head held high after providing some memorable moments.