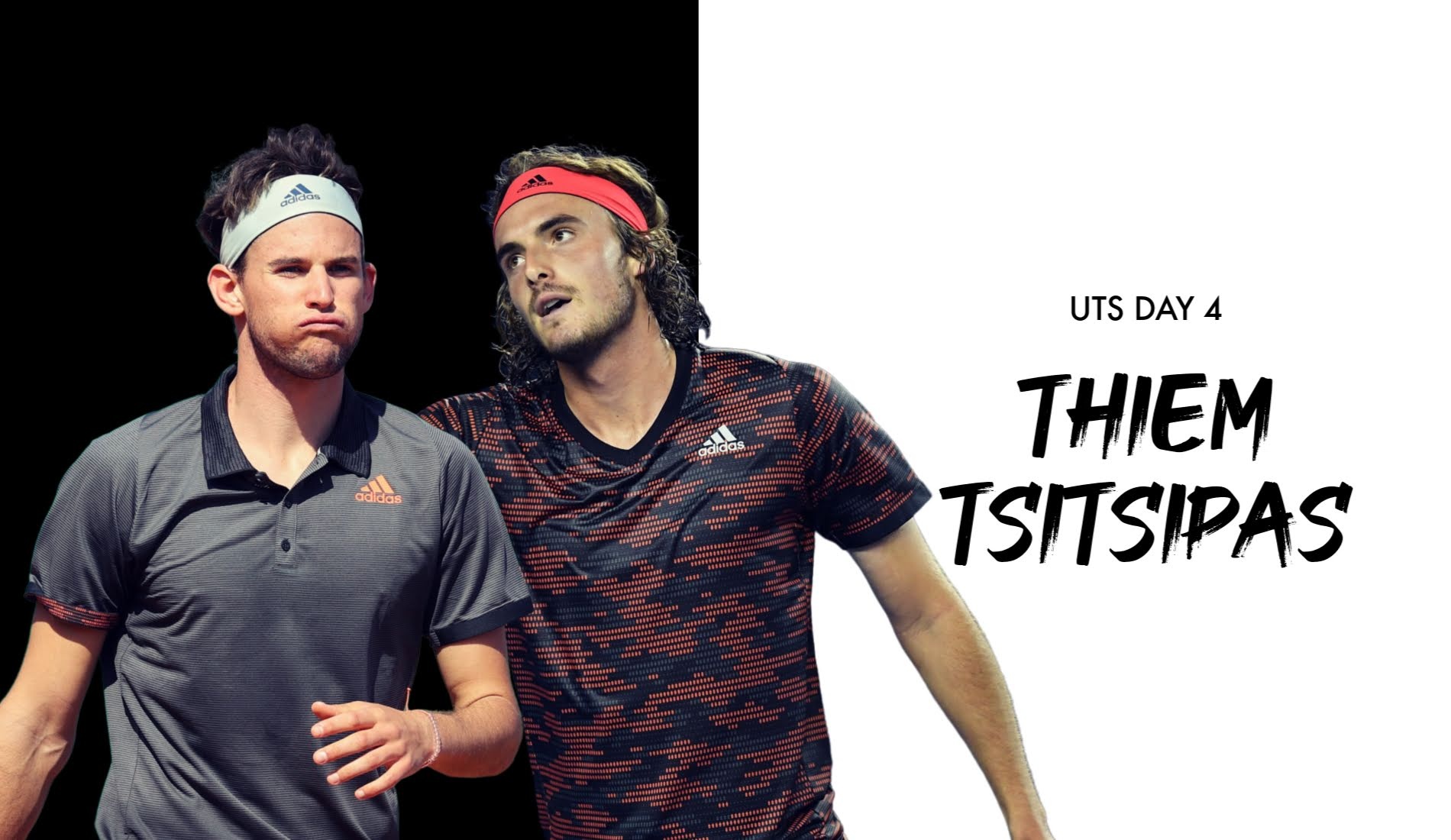 Thanks for having followed us. What a night of tennis with two tight matches after the three landslide victories of this afternoon.

QUARTER 4 & MATCH TO THIEM – 14-13 – The Greek has been leading all the way in this quarter but Thiem digs deep and proves more consistent from the baseline on the decisive point. The Greek makes a backhand unforced error. What a performance from Thiem.

12-8 TSITSIPAS – Fantastic stuff from the Greek under pressure.

9-6 TSITSIPAS – The “-1 serve” card proves efficient for Thiem as the Greek mises his serve.

6-4 TSITSIPAS – Wow. Underarm serve by Tsitsipas. That takes the Austrian by surprise and the Greek finishes him with a passing shot forehand winner. Genious.

5-4 TSITSIPAS – The show is on. Fantastic level of play from both players. Only winners out there.

3-3 – Tsitsipas is back with a backhand winner and two good first serve. Still, he used his “x3” UTS card without being able to produce a winner.

1-0 THIEM – The Austrian is coming forward and concludes the first point of the 4th quarter at the net.

16-10 THIEM – Brilliant backhand winner down the line by Thiem. Too good.

14-8 THIEM – Three-point winner for Thiem. That is just too good from the Austrian whose serve is on fire. He has a six-point lead now.

9-5 THIEM – 4 point lead for Domi. The rhythm has slowed down a little bit.

5-2 THIEM – What a volley on the full stretch by the Austrian. He takes an early lead in this quarter.

Who else is going to watch this play on replay?#UTShowdown pic.twitter.com/JCKPdsYAHd

2-2 Tsitsipas responds with the same inside-in forehand winner. That is what it is about tonight!

2-1 THIEM – What a start to the quarter. Massive inside-in forehand from Domi.

IT IS ONE QUARTER APIECE! – Tsitsipas, more consistent from the baseline, wins his both serve points at 11-11 and equalize. The battle is on. The Greek needed this quarter.

The show goes as @StefTsitsipas takes the second quarter.

10-8 TSITSIPAS – The Greek with both Thiem’s service points thanks to a couple of Domi’s unforced errors.

6-6 – The Austrian has been serving really well for now.

4-2 TSITSIPAS – Great volley from the Greek.

3-2 TSITSIPAS – What an intensity from both players.

12-10 THIEM – What an answer from the Greek God. Ace from Tsitsipas. He earns three points.

11-7 THIEM – Three-pointer for the Austrian who serves and volleys to perfection!

5-5 – What a start to this match. Both players flying around the court.

4-3 THIEM – Thiem is coming forward and concluding at the net.

And now, the blockbuster between Domi Them and Stef Tsitsipas. The Austrian leads 4-3 in their head-to-head. But the Greek won their last meeting in the final of the ATP Finals.

Match 4: Feliciano Lopez “The Torero” vs David Goffin “The Wall”

Goffin wins this thriller! Both players brought on a great show.

Lopez hit an ace with his lefty slice to start. He goes for the winner on the next point but his forehand goes wide. Goffin ends the match on a backhand winner!! A symbol. It has been his signature shot today.

WE ARE GOING TO SUDDEN DEATH, 19-10 – What a 10 minute of tennis by the 38 years old. Goffin finishes with an underarm serve.

14-9 LOPEZ – The Spaniard is extending his lead. It looks like we are heading to sudden death.

El Torero @feliciano_lopez runs like a bull and comes up with a stunning passing shot 🤯#UTShowdown pic.twitter.com/dcVM7XXDrb

9-7 LOPEZ – Unlucky Goffin! He comes very close to hitting a winner twice but his shots are wide.

7-7 – The Torero knows how to steal serve. He levels up the quarter. Great move.

6-4 GOFFIN – Fantastic tennis from Goffin. One backhand winner again down the line.

4-4 – A couple of winners by the Torero. He is so talented at the net.

2-1 GOFFIN -What a backhand passing shot winner from the Wall! Where does that come from? He is living up to his nickname

QUARTER 3 GOES TO GOFFIN FINALLY – The Belgian holds and is now leading two quarters to one.

12-11 GOFFIN – What happens to Goffin at the end of quarters? He is the dominant player and then he gambles.

12-8 GOFFIN – The Belgian serves and volleys on both occasions while using his “winners count 3” UTS card but fails to produce a winner.

9-7 GOFFIN – So smooth backhand winner down the line by David Goffin.

7-5 GOFFIN – Lopez seals serve and it is paying great dividends.

5-1 GOFFIN – A sublime backhand winner from David Goffin. His 9th winner of the night.

3-1 GOFFIN – Seeing David Goffin coming forward is great. It pays off for him.

IT IS ONE QUARTER APIECE AS DAVID GOFFIN AKES THE 2nd 17-11 – He finishes by a fantastic drop shot on a Feliano’s underarm serve.

15-9 GOFFIN – No “remontada” this time from Feliciano Lopez.

11-5 GOFFIN – Goffin is playing with so much variation. Feliciano Lopez

6-4 GOFFIN – Lopez steals serve and makes the most of it by winning four points in a row.

Goffin is not affected by the loss of this quarter and is very optimistic for the rest of the match if he keeps this level of play, he says the commentators.

FELICIANO LOPEZ STEALS THE OPENER, 14-13 – The Belgian has been ahead throughout the whole quarter and had a four-point lead… He double-faults on the deciding point.

12-8 GOFFIN – Goffin hit a couple of winners to extend his lead.

8-6 GOFFIN – As expected, Feliciano Lopez is using a lot his sliced backhand.

7-5 GOFFIN – Goffin is taking the ball early and moving forward.

4-1 GOFFIN – Beautiful start from the Belgian.

Here we go for the first match of tonight’s session.