Asastasia Pavlyuchenkova survived a thriller in what was the first-ever women’s UTS final, beating Alizé Cornet in sudden death on Sunday night at the Mouratoglou Academy. 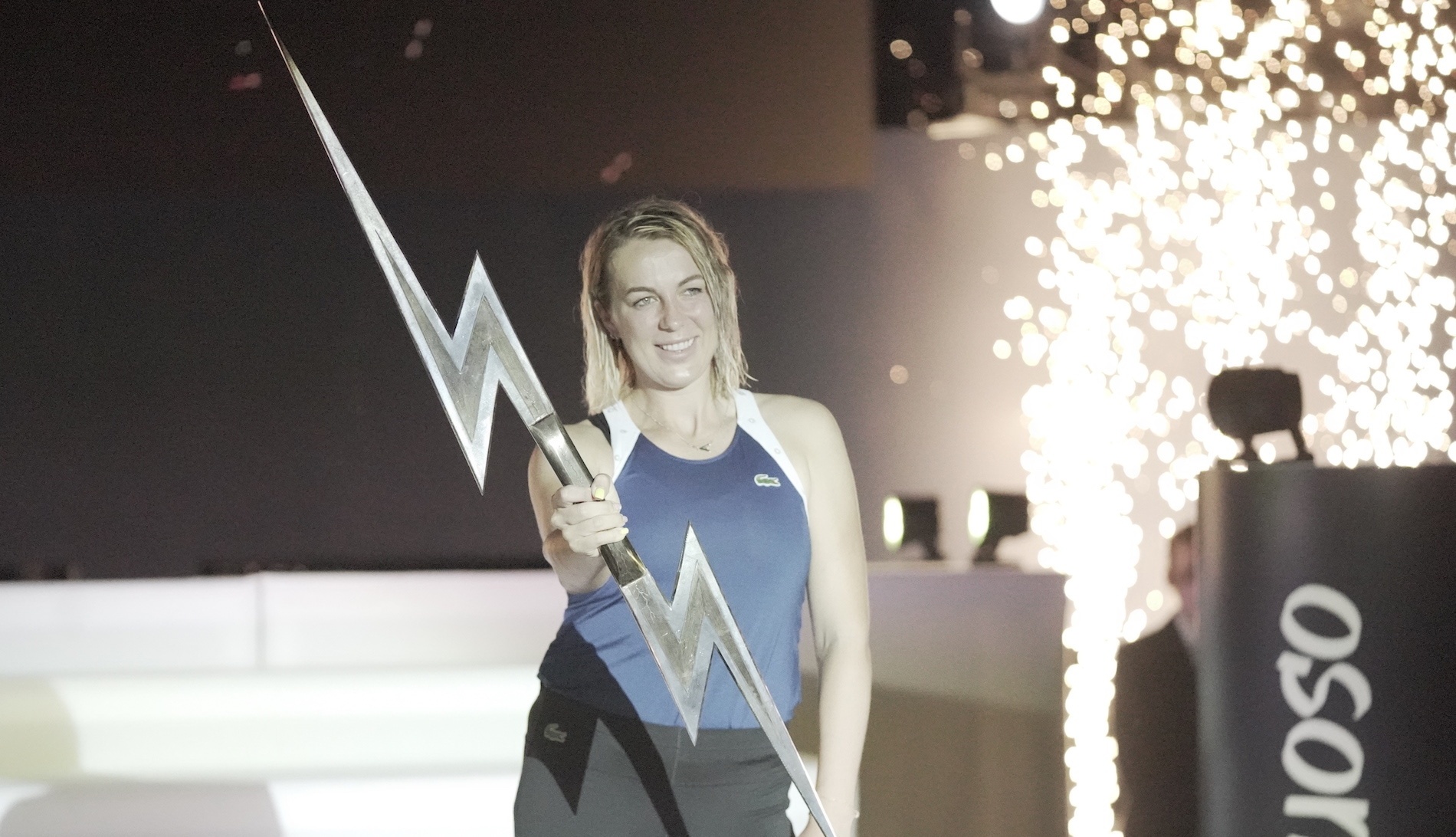 The lightning bolt trophy is going to The Thunder.

Anastasia Pavlyuchenkova won the first-ever women’s UTS event on Sunday, outlasting Alizé Cornet 16-8, 12-11, 11-14, 9-16, 3-2 in sudden death. A back-and-forth final saw The Thunder lead two quarters to love, lose the next two, and then save a championship point before finally triumphing.

“I love winning no matter what it is,” The Thunder explained. “It’s just nice. There were so much nerves; I hated the sudden death. I practiced it, but practice is so much different. Now it was full on.”

Starting at 5-5 in the opening quarter, Pavlyuchenkova won two consecutive points on her own serve and then two straight on Cornet’s serve – including one thanks to a double-fault. The Volcano was the first to play a card with a take away one serve option, but Pavlyuchenkova still won both of those points for a huge 11-5 lead. Losing eight points in a row marked desperation time for Cornet, who played a next point counts two card and converted one to pull within 12-7. The deficit was much to big to overcome, however, and The Thunder powered her way to a routine victory in the quarter.

“I think it was a very good quarter,” Pavlyuchenkova commented. “I kinda started sluggish a little, but I found a way to get back.”

“This quarter was shit, so much shit,” Cornet admitted. “I had a good start and then I don’t know what happened. She plays so fast, so early, it’s tough to get in the rhythm. I’ll try to do better in the second quarter. I always believe until the very end of it.”

Cornet started strong again in quarter two, racing ahead 5-2. That prompted Pavlyuchenkova to use each of her cards: opponent must win in three shots and then next point counts two. The Thunder won two of those points for 5-6, but she netted a routine backhand on one of the double points. With The Volcano serving at 11-9, Pavlyuchenkova blasted back-to-back winners to finally draw even. It all came down to the 11-11 point as time expired, and then Cornet missed a backhand well long to end it. The Frenchwoman tried to use her add 40 seconds card, that she had won earlier in the week during a target-practice competition, but the chair umpire told her time had already expired before the last point ended and therefore it was too late. A heated argument ensued, but of course with no success for Cornet.

Alizé Cornet isn’t having it 😳

Did she ask for her gold card before or after the buzzer? 🤔#UTShowdown pic.twitter.com/7lcd7YzNq4

“I hate injustice,” The Volcano argued. “I thought every second counts. I was up the whole quarter; the whole thing. Just the last point…. It’s very, very frustrating. It’s cruel, but that’s the game.”

“I was expecting her to use it,” Pavlyuchenkova said. “It was a long rally and I was so happy it was over (before she could use the card). It was a stressful quarter.”

With momentum in hand, The Thunder raced to a 4-0 lead in quarter three. That led to coaching timeout for The Volcano, who admitted that another “eruption” was close. Smelling blood in the water, Pavlyuchenkova used her card to force Cornet to serve and volley. Crucially, however, the 30-year-old won both of her serve-and-volley points to stay within striking distance. At 8-8, Pavlyuchenko put in two big serves for a two-point lead – thus bringing the finish line within sight. Cornet, though, was not about to go away quietly. From out of nowhere, the Volcano won six of the next seven points to steal the quarter – the first one Pavlyuchenkova had lost in two matches.

“To be honest I was lucky to win the second quarter,” The Thunder reflected. “It’s not bizarre that I lost one. Every quarter has been super tight.”

“This is the only quarter I was behind, and I won it,” Cornet noted. “It’s a crazy game. Let’s take it to sudden death, please.”

In the fourth quarter it was Cornet who started well. Even with Pavlyuchenkova having played a next point counts two card, The Thunder still managed to earn an 8-3 advantage. Forcing her opponent to serve and volley, Cornet quickly extended it to 10-4. Pavlyuchenkova showed brief signs of a comeback, but she never got closer than three points from tying it up.

“I can’t believe it,” The Volcano said. “I’m excited and nervous at the same time. It’s going to end in like 20 seconds; maybe 40. It’s all about a little bit of luck right now.”

It’s not a final without a sudden death, right? 😉

After Pavlyuchenkova took care of her first service point, Cornet saves one match point by forcing The Thunder into a forehand error. The Volcano attempted a drop-shot on her own championship point, but the Russian retrieved it and deposited it for a winner. On her second championship point, Pavlyuchenkova survived a long rally to clinch the title.