Tennis Majors > UTS > « Live tennis like never before » : everything you want to know or clarify about Ultimate Tennis Showdown (UTS)

“Live tennis like never before” : everything you want to know or clarify about Ultimate Tennis Showdown (UTS)

The Ultimate Tennis Showdown is back for a fourth season. Find out more about the revolutionary tennis event that started in 2020 at the Mouratoglou Tennis Academy. 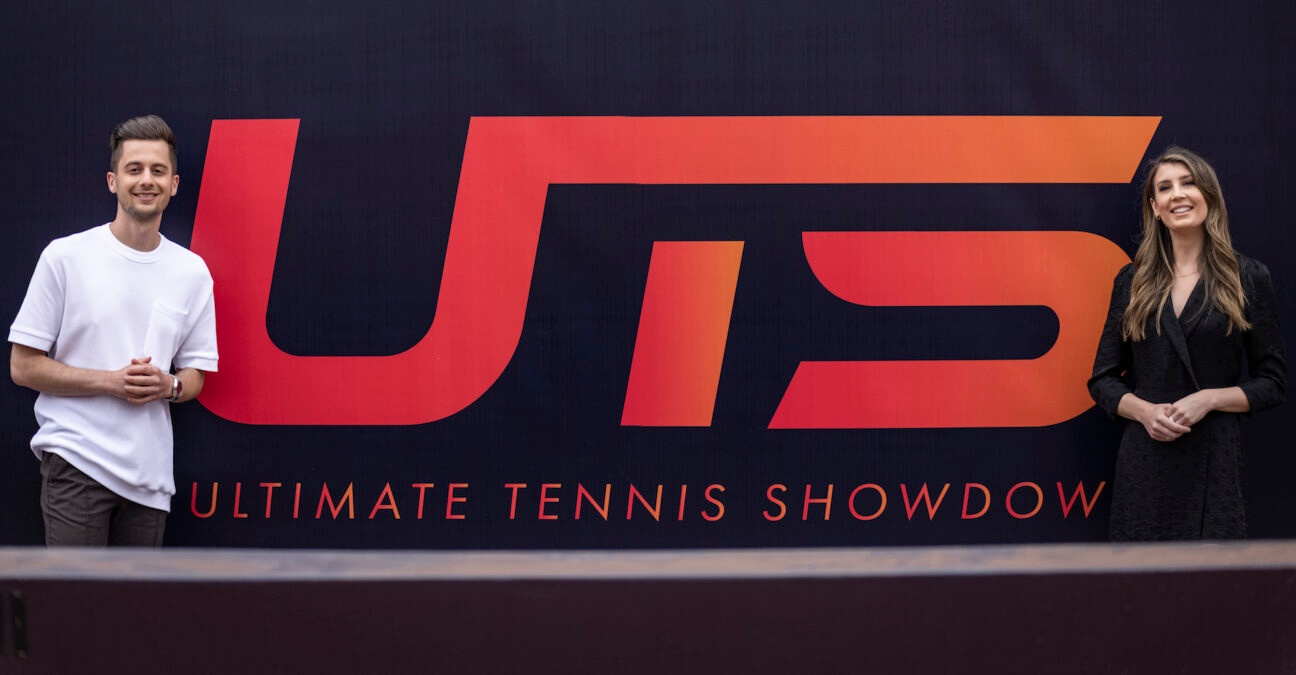 UTS is short for Ultimate Tennis Showdown. It is a new tennis format launched in 2020 that seeks to capture the imagination of fans by tweaking with the traditional tennis format, and supercharging it to make for a more exciting, memorable fan experience. UTS doesn’t seek to compete with the ATP and WTA Tours, it seeks to offer something different to tennis fans who want to know their favourite players on a more intimate level and find and interact with younger fans which may have not discovered the joy of tennis. During UTS, players are encouraged to let their emotions run freely. For all intents and purposes, the code of conduct is thrown out the window and players are free to express their anger, joy and whatever else they are feeling – as long as nobody gets hurt!

The competition brings fans closer to the players than ever before by offering on-court in-match interviews after every quarter. Some of the most memorable moments of the first three editions of the Ultimate Tennis Showdown happened not on the court, but on the sidelines, when the players felt free to give insight into their personalities.

What are the rules of UTS ?

The basics have been in place since the beginning. Four quarters with a running clock are played and the first player to win three quarters wins the match. In 2021, the length of an official quarter has been changed from ten to eight minutes, in order to make the competition more like a sprint than a marathon. During the quarters there are no games, just a running score as players alternate serving two points apiece. The player with the most points when the clock runs out at the end of the quarter wins the quarter.

If the players each win two quarters, sudden death comes next. The first player to win two consecutive points is the sudden death winner, so every point beyond the first point is a match point.

What are UTS cards?

UTS cards are what gives the competition a game-show feel, and force the competitors out of the comfort zones. Each player begins a quarter with two cards that he or she can use, when the time is right. Players can choose a card that makes their winners count for three points, or one that forces their opponents to serve-and-volley. There is also a “steal serve” card that allows a player to serve four points in a row.

UTS cards give the tennis a new level of tactical strategy, as players plan their card usage, based on their strengths, time left on the clock and – of course – their opponents weaknesses.

You can learn more about UTS cards here.

When will UTS happen ?

The fourth edition of UTS, called UTS4 will take place on May 24-25 at the Mouratoglou Academy in the South of France, on red clay for the first time. Go to UTSlive.tv for more details and info on future editions. More UTS editions are coming in 2021, but dates have yet to be finalized, so stay tuned!

Who are the UTS champions?

The Ultimate Tennis Showdown has crowned four champions across UTS1, UTS2 and UTS3.

How can I watch UTS?

UTS can also be viewed on traditional broadcasts around the world.

Where can I watch videos of UTS highlights ?

Tennis Majors, a UTS media partner from the beginning, provides coverage and highlights of all UTS matches, including live blogs, exclusive interviews, and b-roll videos. You can see all of our content at Tennis Majors.com. You can also watch highlights and read more about the competition at the Ultimate Tennis Showdown’s official website.

What are nicknames of the players at UTS ?

The nicknames are part of the UTS allure, and each player has an active role in choosing their own nickname, ideally one that emphasizes their personality and embraces the UTS spirit of self-expression and high energy. Here is a list of all the players that have competed at UTS, and their UTS nicknames.

“The Hammer” Matteo Berrettini was the first ever champion of UTS. The Italian embraced his nicknamed and powered past Stefanos Tsitsipas in the final.

“The Artist” Dustin Brown struggled to find his comfort level against top-level UTS competition, but he improved with every match, and he never failed to entertain.

“The Wall” David Goffin took his time getting used to the UTS format, but he ended up playing some great tennis, especially in his most memorable match against Benoit Paire.

“The Virtuoso” Richard Gasquet was the most consistently stunning player at UTS1, UTS2 and UTS3! All that was missing was a title!

“El Torero” Feliciano Lopez was a master of the cards, and a true disruptor with his wicked serve and fantastic use of the UTS cards.

“The Tornado” Corentin Moutet got into a shouting match with Stefanos Tsitsipas in an emotional contest that went the way of the Greek.

“The Rebel” Benoit Paire is one of kind. A true talent both on and off the court, Benoit makes fans feel his joy and his pain.

“The Sniper” Alexei Popyrin was a silent assassin at UTS. He struggled to find his confidence at times, but his best tennis was breathtaking.

“The French Flair” Lucas Pouille had his first appearance cut short due to injury, but we’re hoping he comes back soon.

“The Machine” Holger Rune took Corentin Moutet to the distance in his UTS debut. It was a nice step for the Dutchman, who is now making waves on the ATP Tour.

“Domi” Dominic Thiem was the highest-ranked player to play UTS in 2020, and he was a tough man to take down.

“The Greek God” Stefanos Tsitsipas was the king of UTS sudden death, and a fairly solid off-court entertainer as well. The Greek God can sing for his supper.

“The Panther” Felix Auger-Aliassime came close to racing away with the UTS2 title, but a bigger cat took him out in a thrilling final.

“The Artist” Dustin Brown and his awe-inspiring bag of tricks came back for UTS2, where he won a pair of matches.

“Grigor” Grigor Dimitrov was still trying to find his fitness after a bout with Covid-19, and he put his heart and soul into his tennis, like he always does.

“The Virtuoso” Richard Gasquet would like it if Roland-Garros used a UTS format. He’s a master at it!

“El Torero” Feliciano Lopez was one of the toughest players to defeat at UTS, and a total joy during his on-court interviews.

“The Musketeer” Nicolas Mahut embraced his inner René Lacoste and played with tremendous style, like he always does.

“The Tornado” Corentin Moutet lived up to his name. You seriously have to see the tornado to believe the tornado – there is never a dull moment with the Frenchman.

“The Rebel” Benoit Paire and his flair for the dramatic made a lot of buzz at UTS2, even if he didn’t always put his best tennis on the court.

“El Fuego” Fernando Verdasco and his legendary forehand were a menace to the competition, but the Spaniard’s inability to master the format held him back.

“The Lion” Alexander Zverev came, saw and conquered. The German raced to the title and roared on the podium when he hoisted the trophy.

“The Thunder” Anastasia Pavlyuchenkova was heard loud and clear at UTS2 when she became the first WTA player to win a trophy.

“”The Prodigy” Brenda Fruhvirtova, just 13 at the time, put Alize Cornet to the test in her first match, a foreshadowing of things to come for this bright talent.

“The Volcano” Alizé Cornet was erupting left and right, but her energy was not enough to push her past Pavlyuchenkova in the first women’s final at UTS.

“The Warrior” Ons Jabeur is a wonderfully gifted shotmaker that brought her unique style of tennis to the UTS stage for the first time last summer. We hope she’ll be back.

“The Survivor” Pablo Andujar showed his grit and passion at UTS3 in Antwerp.

“The Viper” Dan Evans an his lovely sense of humour were a welcome addition to the UTS field, his brilliant tennis made it even better.

“The Virtuoso” Richard Gasquet put forth another brilliant performance and reached his first final, but didn’t have enough left to take out the Demon when he got there.

“The Demon” Alex de Minaur was one of the most dominant forces we’ve ever seen at UTS. His court coverage and aggression were a sight to behold.

“El Torero” Feliciano Lopez, the legendary veteran, really excelled at the UTS format. One day we think he’s going to win a title.

“Grigor” Grigor Dimitrov makes his return to UTS and hopes to find the magic on the clay.

“The Hot Shot” Taylor Fritz isn’t a natural clay-courter, but he is a natural showman.

“El Tanque” Cristian Garin is born and bred on the red clay and he’ll be one of the favorites at UTS4.

“The Tornado” Corentin Moutet loves the clay and loves the drama. Could he steal the thunder and win the trophy?

“The Chessmaster” Daniil Medvedev is also searching for his best tennis on the clay. Perhaps the charged UTS atmosphere will help him find the energy he needs.

“The Bublik Enemy” Alexander Bublik, an absolute wizard shotmaker, is one of the most unique personalities in tennis.

“Fogna” Fabio Fognini is wild, is crazy and is not afraid to let the world know. He’s perfect for UTS and we’re lucky to have him.