Can Stefanos Tsitsipas win a Grand Slam in 2020 ? Yes, answers Patrick Mouratoglou in his “Eye of the Coach” video for Tennis Majors before the Australian Open, based on his level at the Nitto ATP Finals. 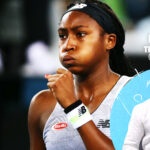 Can Gauff beat Osaka ? – The Eye of the Coach #2
The figures

Can Stefanos Tsitsipas win a Grand Slam in 2020 ? Yes, answers Patrick Mouratoglou in his “Eye of the Coach ” video for Tennis Majors before the Australian Open 2020, based on his level at the last Nitto ATP Finals. In London, Stefanos Tsitsipas beat Daniil Medvedev, Alexander Zverev, Roger Federer and Dominic Thiem, to win the most important tournament of his career. In 2019, he also showed an incredible level of tennis.

His game improved a lot in just one season and he entered into the top 10 for the first time of his career.

“Game-wise, he’s ready. Physically-wise, he’s ready to play those long matches.He’s built an incredible physical. He’s fast, powerful and able to play long. He’s so hungry, he wants to win it. When you have all those three things… He’s always believed in him.”

Tsitispas “is going to be a big champion”

Now, the next step is to win his first Grand Slam and stop the hegemony of the Big 3. It’s the main goal of the 2020 season for Stefanos Tsitsipas. Why not in Australia, where he beat Roger Federer last year and reached the semi-finals ?

“He’s ready. He’s going to win a Grand Slam. He’s going to be a champion, a big champion. Will it come next year? Will he need one more year? That’s what’s great about tennis. We’re gonna discover it.”

The Greek will face Salvatore Caruso for his first match in Melbourne. Stefanos Tsitsipas lost in the first round of the last two Slams. In Wimbledon against Thomas Fabbiano and in the US Open against Andrey Rublev. He wants to do better this time.