Home » Vidéos » How can the behind-closed-doors US Open improve its atmosphere? – Match Points excerpt

How can the behind-closed-doors US Open improve its atmosphere? – Match Points excerpt

Former Wimbledon champion Marion Bartoli and New York Times writer Ben Rothenberg give their thoughts on how the US Open tournament organisers are trying to create some noise and buzz in empty stands. 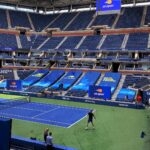 Is winning the 2020 US Open the same achievement as winning any other Grand Slam? – Match Points excerpt
Next 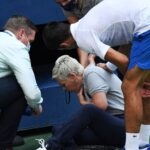 The US Open is famous for its noise, great atmosphere, and partisan fans. The 2020 tournament is very different indeed – behind closed doors, with fans only able to watch from home.

In the latest edition of Match Points, former Wimbledon champion Marion Bartoli says that as a television viewer, she is unimpressed with the lack of crowd noise. She suggests that tournament organisers and broadcasters could have arranged for virtual crowd noise from all the courts, taking a tip from the European football competitions over the past few months, and not just the showcourts.

“I’m listening to it…there is absolutely no noise,” she said. “I feel even though I am passionate about a match, it’s difficult for me to watch a full match – you feel you are watching a practice.

“It’s just so flat. It’s incredible. The US [Open] is well known for the entertainment – to feel so flat, for me it’s depressing, actually.

“I would have loved to have background noise. The players can’t hear anything – it would just be for the viewers.”

But she also points out that she doesn’t think the lack of atmosphere is affecting players, who are raising their game for the occasion.

“You can feel the tension in the players, you can feel they are playing a Grand Slam – but because of the atmosphere it doesn’t feel like that,” she said.

New York Times writer Ben Rothenberg isn’t keen on some of the innovations the organisers have tried – like video screens of fans – but appreciates the effort.

He too would like a bit of virtual noise, saying: “As a writer, I compare it to punctuation marks in a sentence. You need the crowd to react with an exclamation point of applause.”