World No 1 Ash Barty will meet Aryna Sabalenka in a prestigious clay-court final for the second time this spring. Here we look a bit more closely at this budding rivalry on clay 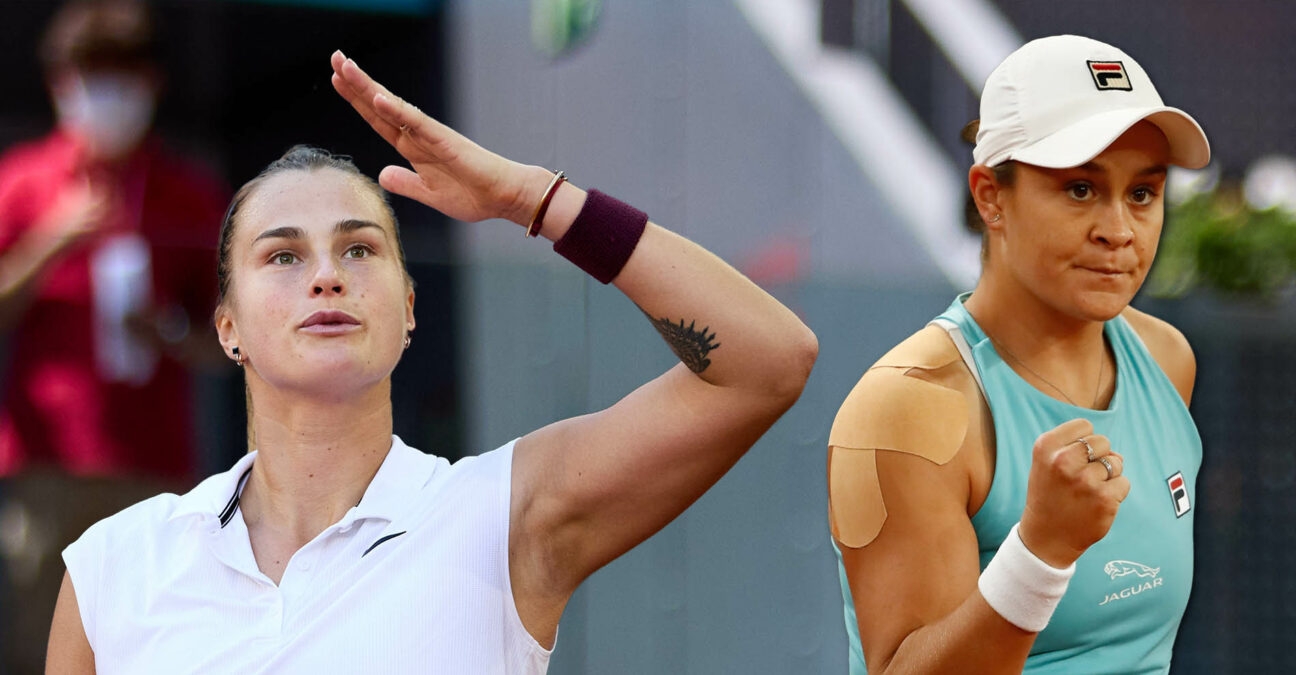 Rivalry, renewed. For the second consecutive tournament Ash Barty and Aryna Sabalenka will battle for a prestigious clay-court trophy. They are the two strongest players on the clay thus far in 2021, so it’s only fitting. Here are some notes, numbers and quotes concerning Saturday’s final:

Ever since Ash Barty showed up on the red clay in Stuttgart, the world No 1 has demonstrated that, despite needing time to adjust to a surface that still isn’t all that familiar to her, her Roland-Garros title in 2019 was far from a fluke.

Barty slowly ticked off the boxes and made all the adjustments at Stuttgart, getting her feet underneath her and getting her tactics wired. In Germany she reeled off three top 10 wins in three sets in her final three matches to claim the title. In the final it was the heavy-hitting Sabalenka who stood on the other side of the net from Barty, and though the Belarusian took a good crack at it, it was the 25-year-old who was able to solve the Sabalenka puzzle for the second time this season (also Miami).

After her Stuttgart win, Barty talked about the fact that she’s been able to hit a new level in 2021:

“I’ve certainly felt like I’m taking my tennis to kind of a new level, in a sense of being able to be calm and play with freedom and play without consequence in a way, just going out there and try to bring my best every single point,” she said.

It’s the Aussie’s ability to deliver under pressure and in the tight moments that has helped her the most of late. Barty, poised to perfection, has won nine straight deciders and is 11-1 in three set matches overall in 2021, including her two wins over Sabalenka.

“I feel like it’s just always staying in the fight, always staying in the hunt and never letting it slide away,” the Aussie said. “That certainly doesn’t guarantee results, doesn’t guarantee success. It guarantees you give yourself the best chance to do what you do and to figure it out and to find your way. I think it’s important not to panic, but I think everyone emotionally has different ways that they play on the court. I have always been quite calm on the court. That’s just always been my demeanor. But for me it’s more about just trusting myself and knowing that we just keep chipping away and trying to find a way and then give yourself time to do that.”

Aryna Sabalenka entered the season with a 15-13 record on the clay for her career. She is now 9-1 on clay in 2021. What’s not to like about that? The Belarusian’s overall confidence in her game, and in her ability to do more than just overwhelm her opponents with power, is clearly paying off this season. She is now a player who believes she can win with a variety of tools on any surface – even clay.

The Belarusian has suffered a lot of heartbreak in 2021, notably her loss to Serena Williams at the Australian Open, where she was denied her first ever trip to a Grand Slam quarter-final, and her losses to Barty in Miami and Stuttgart, as well as her defeat at the hands of Garbine Muguruza in the quarter-finals at Dubai. But that which does not kill her, will only make her stronger, Sabalenka says.

“I was really first like really angry and crazy about it, but these losses give me kind of power, and it motivates me to work even harder. From [those] matches I can see what I have to work on, which is good,” she says. “I just keep working and I keep improving myself, [to] make sure that the next matches I will win.”

Barty owns the 4-3 head-to-head edge over Sabalenka, but the pair have never met on outdoor clay. The conditions in Madrid are faster and drier than they were in Stuttgart, and Barty knows it will be challenging to contain the throttling power of Sabalenka in the Magic Box.

“The conditions here change the matchup marginally, like they do for each tournament,” Barty said after her semi-final win over Paula Badosa. “Each tournament has different challenges. Certainly here there are new challenges to, say, from Stuttgart which was completely different clay, indoors, different ball. There are a lot of variables.”

Barty believes that the challenge will be essentially the same, however: Serve well and try to keep Sabalenka on her back foot whenever possible.

“Like I said, for her it’s serving and first shot, being able to control the point,” she said. “That gives her freedom on return games to be more aggressive and to really knuckle down. The balance for her must be really good this week. The challenge is to get yourself into a position where she’s not controlling the court. It’s about neutralizing as best you can for me, changing the pace, being aggressive when I have to be, running when I have to as well. It’s a massive challenge.”

Barty: Ripping through top players in 2020

Barty has been on a real tear against elite competition of late. Since the start of the season she has won all 10 of her matches against the top 20 and all six against the top 10. Here are those results.