The Serbian showed one more time during the ATP Cup final that he was not to be denied by Rafael Nadal on a hard court. Years-Long supremacy that could keep on mattering for the Australian Open. 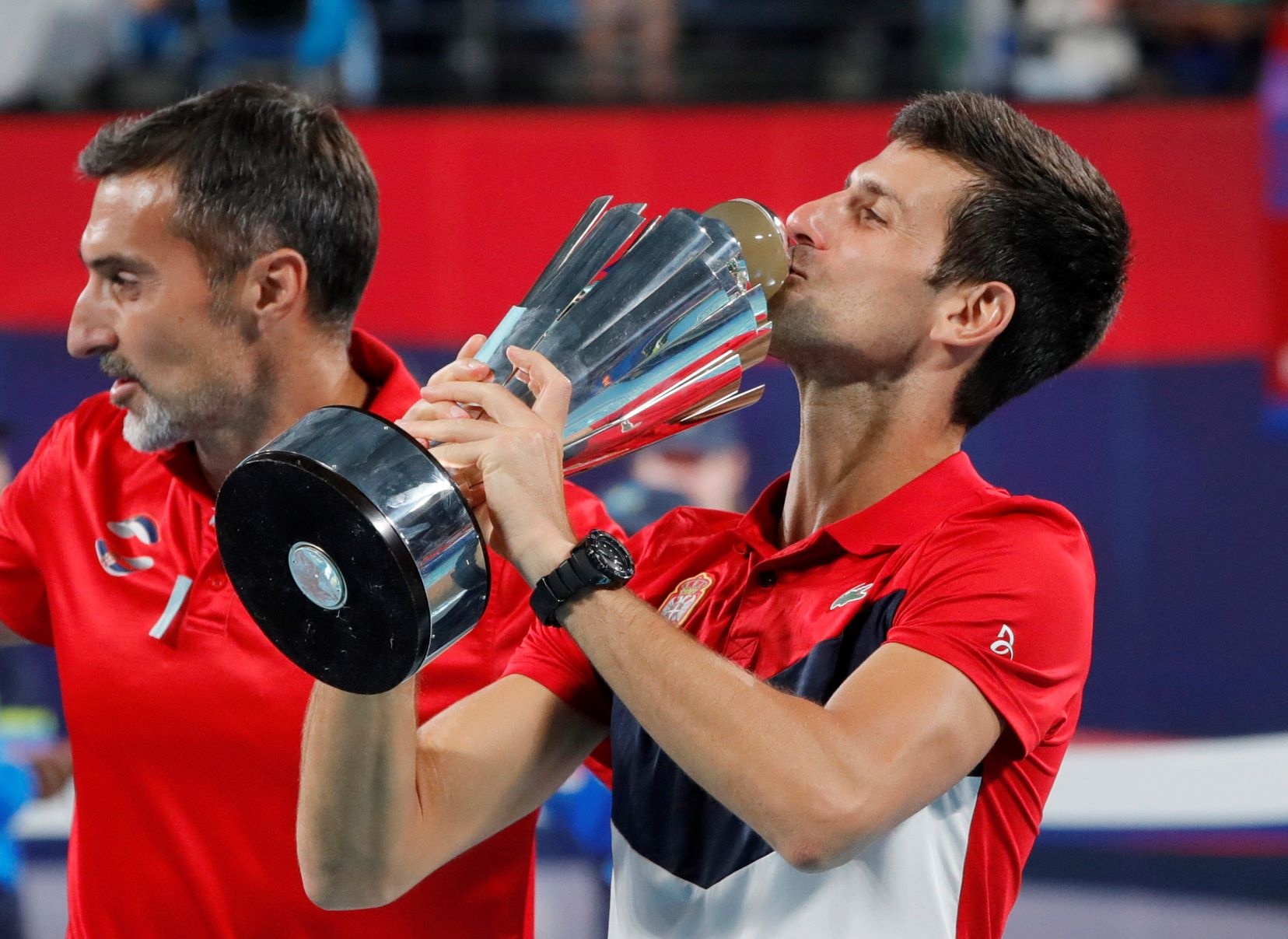 They say all the streaks are bound to be broken. They say one can’t win forever. They say rivalries always go through momentums. They say all that, but Novak Djokovic on hard courts against Rafael Nadal does not care, at all. On Sunday for the second single of the ATP Cup final, the Djoker won his 9th match in a row on that surface against the Spaniard (6-2, 7-6) and, maybe even more, he won his 19th consecutive set against his nemesis. If Djokovic only leads 29 to 26 against Nadal in their careers, he leads 20 to 7 on hard courts. Imagine that: “Rafa” has not won a single set against one of his biggest rivals, for now, six years, four months and counting (US Open 2013 final). At this level, we’re not even talking about mental edge anymore but trauma.

When the numbers reached this kind of madness, it can’t be due to circumstances, luck, bad luck, fitness, or whatever kind of tennis universe shenanigans you’d want to put in the way. Nadal knows and of course, Djokovic knows and that’s why it keeps going on: because it is logical. On all surfaces, “Nole” has found since 2011 a game plan that proves to be Nadal’s kryptonite, but anywhere out of hard courts Nadal slowly but surely has regularly found a way to get out of it here and there. His issue on hard courts is quite simple: here, that infamous game plan meets Djokovic’s best surface, and suddenly the trap closes on him inexorably. Let’s be clear: Rafael Nadal is an extraordinary hard court player, it just takes a look into his résumé to know it. But let’s be clear again: he’s still miles behind the hard court player that Novak Djokovic is. Does that mean he’s always bound to fail against the Serbian on that surface? Surely not. Does that mean he has to hope for “Djoko” to finally have a so-so day on that turf, and for himself to be zoning, to get the upper hand again? It really seems so.

And not for any subjective reasons, which is the worst-case scenario for Nadal. Of course, confidence plays a big part. Of course, the mental edge plays a big part. But what is playing the biggest part of it all are Djokovic’s natural skills on that surface combined with a brain that acts like a computer: he has figured Nadal’s game out and he keeps repeating, again and again, the same partition without getting dragged into changing one single note. That game plan has made such damages that you now can see players study it and trying to imitate its brilliance. Not all kinds of players can do it, as for this strategy one needs a stellar backhand ability and a mastering of high speed of play. But look at Roger Federer’s recent change of luck against Nadal, or more recently David Goffin’s victory: anything rings a bell? Hell yes, it does. Still, no one does it better than the original master: a master who, after coming up with the basis of that plan, honed it – and keeps honing it – with a data specialist. His plan is now iron-proof, as long as fitness and cold blood are in the house. It’s sounding way easier than it is: it’s all about doing the opposite than one would naturally do against the Spaniard. If someone would say “go to his forehand, always go to his forehand”, you’d wonder about his sanity. But that’s the genius of the Djokovic’s plan: he has built it all around Nadal’s main weapon whom he then destroyed game after game until rendering it useless. And when you do that to Rafa’s forehand, you own the whole Nadal’s game. And you also own his nerves. Also when it happens on a day when Nadal struggles with his energy and so intensity levels like in Sydney: it can take dramatic proportions at any given time.

On hard court, Rafa just can’t find a way around this because he can’t get the spin he needs on that wing to face the assault and because it then goes way too fast against Djokovic for him to settle. He feels rushed and suddenly he doesn’t know where to hit anymore. No zone is safe, none of his shots hurt, no path comes for him to dictate: so he keeps defending, running, and so losing. Easy, you see? Except it’s not, or any player with a strong backhand would be able to do it. Djokovic makes it look easy for three reasons: he can play naturally so fast and flat that you barely see the ball bounce, his out-of-this-world backhand can change directions from cross-court to down the line as fast as a laser, can hold its fort against Nadal’s forehand as if it wasn’t The Shot, and finally, he plays tennis like others play chess. This last point is a common point with Nadal, but on hard court Rafa struggles too much to keep up with the speed of execution. If he won in the past against Novak on that surface, it was because he could play both feet on his baseline during the whole match, because his forehand wasn’t doubting and because his mind was clear. But after losing so many times on that surface against this rival and as he’s not getting any younger and so it’s tougher for him to play this fast for this long, his mind has been blurred. You could see it in his body language in Sydney: the looks to his box, the huge fist pump after saving a break point in just the first game of the match, the slight shaking of his head on his chair. On hard court when Djokovic is at his best, Nadal knows what’s to come and it is eating his game and his mind alive.

In that second set, he fought like hell and he started to run better, to play faster, to serve better to avoid having Novak’s hand on his throat as early as the second shot. He found a way to do some damage with that forehand and wasn’t that far at all. But what happened? At 4-4 in the tie-break, Djokovic hit two monsters of flat and fast backhands on Nadal’s forehand, getting him out of the court enough to then hit, in a blink, a laser-like backhand down the line. A roar, the end. It is always going to work. Worst for Nadal? Djokovic, by repeating those wins with that plan, has now a margin and a crazy amount of confidence. Sure, it demands perfect execution, absolute serenity, and a sky-high fitness level: but the Serbian doesn’t lack any of this. You’re going to tell me “but surely Nadal now knows all about this plan and so should anticipate it and neutralize it”. Sure, and sometimes he can. But then what happens? Djokovic adjusts and starts to go back to the natural way: insisting on Nadal’s backhand. It’s not going to last in the long run, because Novak’s forehand towards Rafa’s backhand is a less sure thing than his backhand against Nadal’s forehand. But it will last long enough for Rafa to then wonder again which side he should cover…

And the moment he starts wondering, it’s when Djokovic is going to hit a wonder of crossed court backhand that will either be a winner or that will draw the error from Nadal’s forehand. It’s clinical, and no other surface renders it more lethal than hard court. Rafa isn’t going to get the edge on Novak’s footwork on hard court, isn’t going to hit harder and heavier than him on hard court, isn’t going to protect his serve from the Serbian’s return quality on hard court. And surely he is not going to get the last word on Novak’s backhand on hard court. In this battle between one of the greatest forehands of all times and one of the greatest backhands of all times, it’s Djokovic who for now wins on that turf. Nadal’s forehand needs time to kill you if he can’t kill you right away: but no way he can win the one-two punches against Novak, and also there is no time to build this rollercoaster on that surface against someone who plays with both feet inside the court and can find every corner of the court with half the time that would be needed for anyone else. On hard court, the fear is not on Djokovic’s side. On hard court, Djokovic has a front seat in Nadal’s game and brain because it’s maddening for Rafa to see his best shot destroyed like that. It doesn’t make sense to him, it’s not natural: Rafa doesn’t know how to protect his forehand because Rafa never needs to protect it. His footwork hasn’t been built for it, his whole game hasn’t been built for it. And so the moment he has to protect it against Djokovic, it opens way too many holes. Nadal would need a complete overall of his game plan against Djokovic on that surface. He’d need to erase everything he knows and start again. And even then, he still might have to hope for doubt to get somehow into Novak’s mind to stand a chance. This Sydney loss won’t help him, like the dispatch he went through during last year’s Australian Open final didn’t help (6-3, 6-2, 6-3), as the absolute destruction of his own game he witnessed in Doha’s final in 2016 (6-1, 6-2) didn’t help. After this match, Rafa said something he never said before: “I don’t know anybody who’s ever played tennis like this. Since I know this sport I’ve never seen somebody playing at this level.”

The issue now is: each time he comes against Djokovic on a hard court, he knows his game can get put in pieces. And once you have accepted the superiority of a player like Novak Djokovic, you’re starting each match with a huge burden stuck at your feet. In sports nothing is impossible, and Nadal is way too big of a champion to not find a way on a day to get a significant win over Djokovic. But on hard court, Djokovic looks more and more like Nadal on clay. As for the Djoker, he’s not taking the Rafa-puzzle solving for granted. I asked him after last year’s final if he felt like he had solved Nadal, and this was his answer: “I don’t want to say I figured him out, because I don’t want that to bounce back at me in any way in the future. I might have figured him out for the match, but not for life. We’re still going to have a lot of matches against each other: I really hope we will because this rivalry has been the most significant, the one that impacted me on a personal and professional level than most in my life. His serve has improved, but at the same time, I also worked on my serve. We both are going to strive for improvement in the future regardless of what’s happening.” One is too smart to dare to think the problem is over, the other too dedicated to winning to give up. Bring on the next battle!