Home » News » Federer vs Nadal: GOAT, head-to-head, stats, all you need to know about the rivalry

Federer vs Nadal: GOAT, head-to-head, stats, all you need to know about the rivalry

The rivalry between Roger Federer and Rafael Nadal is probably the greatest in tennis history. Here is everything you need to know about it. 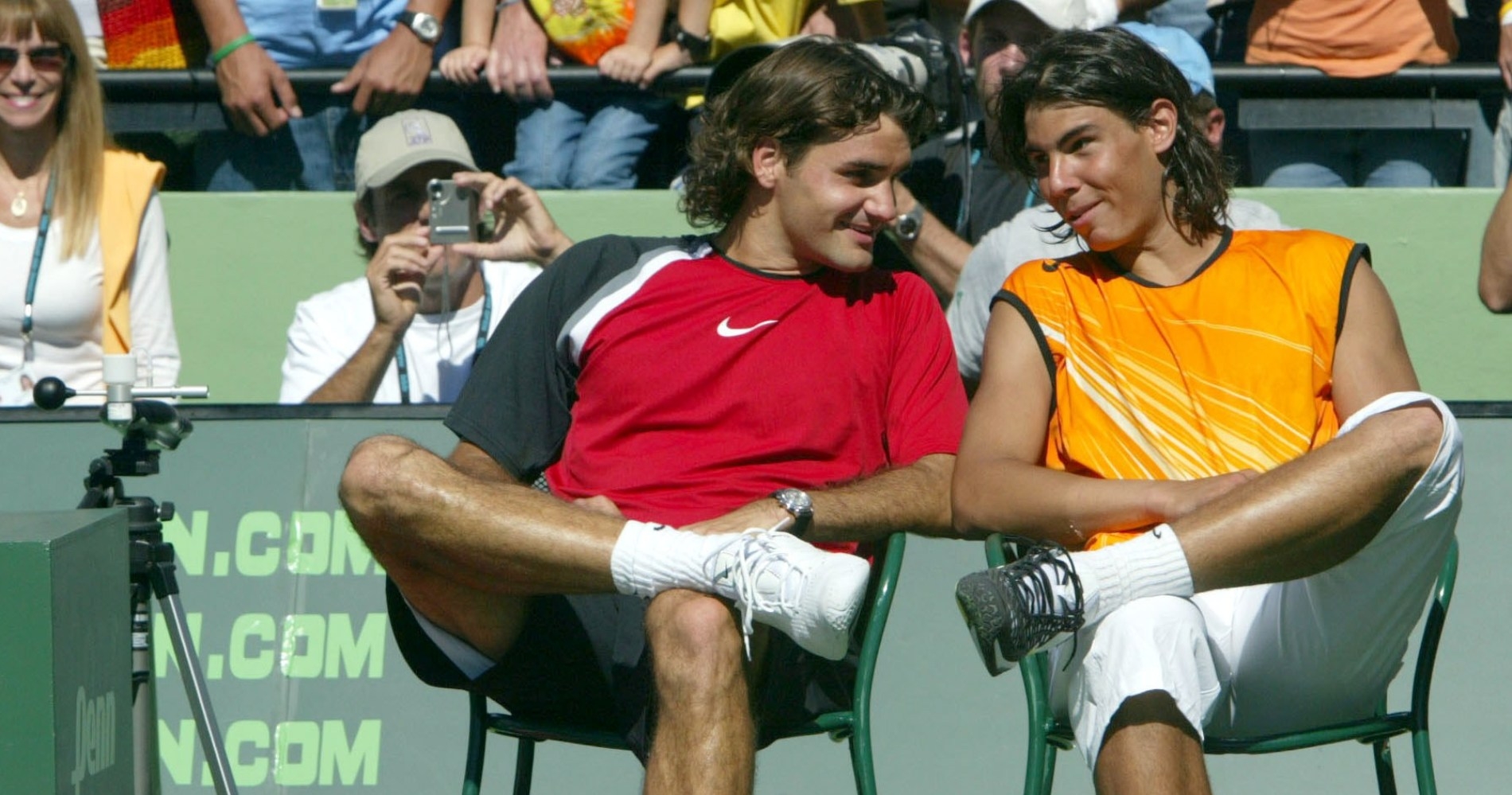 Federer and Nadal in Miami in 2005

The rivalry between Roger Federer and Rafael Nadal is considered by many as the greatest ever in men’s tennis. The Swiss poetic shot-making and variety perfectly contrast to the ferocity of the Spaniard’s groundstrokes, as Patrick McEnroe explains: “The reason why Roger Federer vs. Rafael Nadal is such an incredible rivalry is the contrast in styles and different personalities. One is a super aggressive lefty with his physicality and the other is the smoothest player out there”.

A Federer – Nadal game is commonly referred to as a “Fedal”. The two superstars have faced each other 40 times. 20 were on hard courts – 14 of them outdoors and 6 indoors -, 16 were on clay, and 4 were played on grass.

In their first meeting in March 2004 in Miami, 17-year-old Rafael Nadal managed to stun the then new world No. 1, Roger Federer.

The Federer vs Nadal rivalry reached its peak between 2006 and 2009. The two players were then ranked world number one and two. In 2006, 2007 and 2008, Nadal and Federer faced three years in a row in the French Open and Wimbledon finals.

From 2008 to 2014, Nadal dominated the rivalry, he beat Federer 15 times, for only 4 losses. At the end of 2014, Nadal led 23-10 in their matches. Technically speaking, left-handed Nadal makes right-handed Federer suffer on the backhand diagonal, especially the Spaniard’s heavy top spin on forehand that bounces high and is difficult to handle by Federer single-handed backhand. On clay court, Rafael Nadal has a record of 14 wins and two defeats against the Swiss.

Quite surprisingly, Federer took the advantage in the rivalry since 2015. Since then, Roger Federer is 6-1 against the Mallorcan. Some evolutions in Federer’s racquet and backhand can explain such a turnaround. Federer’s record against the Spaniard is positive on hard, with 14 victories and ten defeats. However, Nadal leads 8-6 on the away hard court. Nadal’s only win over Federer since 2014 came in the semifinals of the 2019 French Open.

Federer vs Nadal: Who is better?

Ranking these two champions and electing the GOAT is a harsh task, especially since their careers are not finished.

Nevertheless, here are a few facts to draw a comparison.

Roger Federer has won 103 ATP titles in his career, which can be broken down as follows:

He also won the Davis Cup once in 2014 with the Swiss team.

He won the silver medal in singles at the 2012 London Olympics and the gold medal in doubles with Stan Wawrinka at the 2008 Beijing Olympics.

He has also lost 54 finals, including 11 in Grand Slams.

Rafael Nadal has won 85 ATP titles in his career, which can be broken down as follows:

He also lost 37 finals, including 8 in Grand Slams. 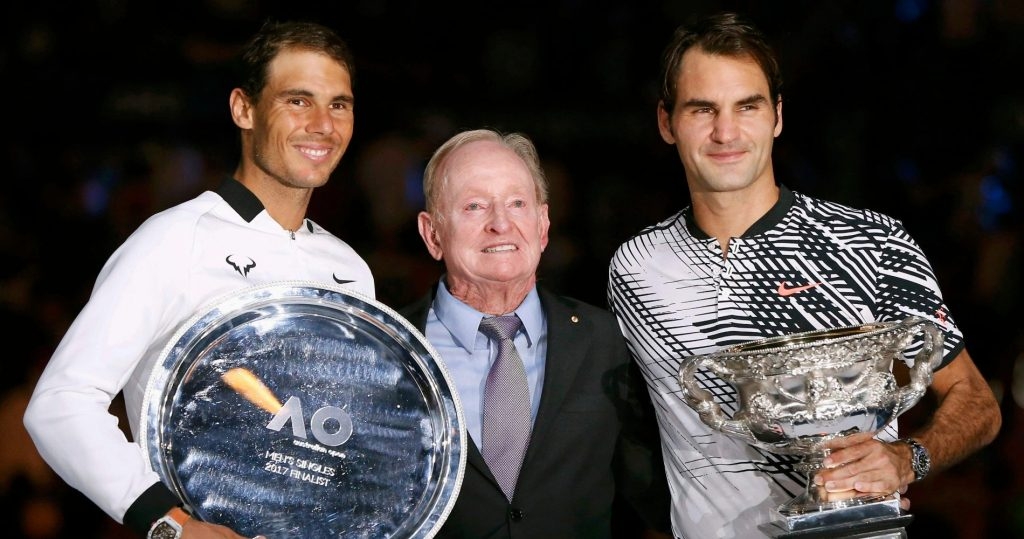 Who has the better statistics?

Nadal has a 55% career point winning ratio, compared to Federer’s 54%. Federer is a better server: he has won 70% points on his serve versus 67% for Nadal. But Nadal is a better returner, one of the best of the tour: he has won an impressive 42% of return points in his career, compared to 37% for Federer. 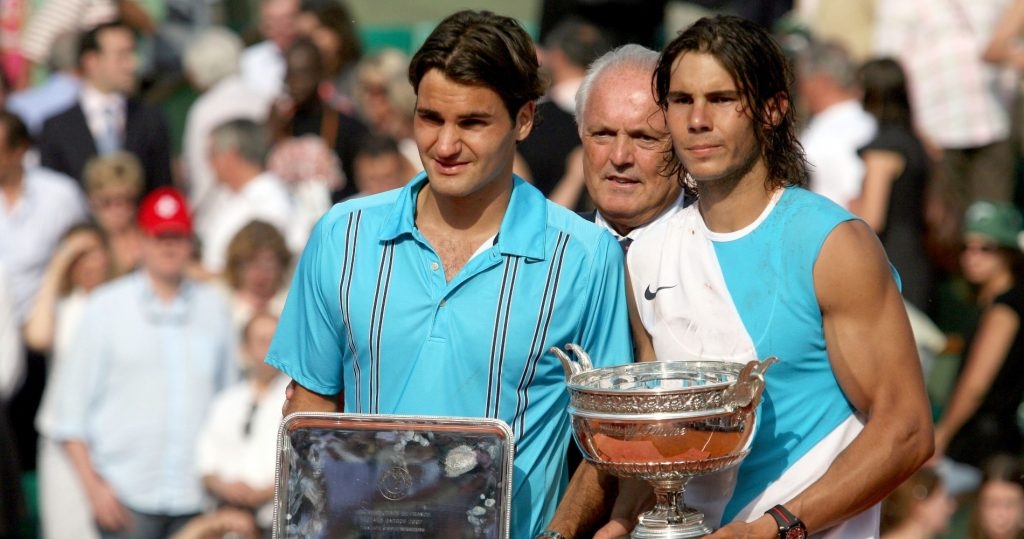 Federer vs Nadal: What is their greatest match?

The 2008 Wimbledon final, which featured No.1 seed Federer and No.2 seed Nadal on July 8, 2008, is considered by many as the greatest match in tennis history. Even in the mouth of the 1980 finalists : Bjorn Borg described it as ‘the best tennis match I’ve ever seen in my life’ and John McEnroe as ‘the greatest match I’ve ever seen’. The explanation is threefold: the stakes of the game, the drama, and the level of play.

Federer won five consecutive titles at the All England Club from 2003 to 2007. He is one match away from overtaking Bjorn Borg, who also won five titles in a row from 1976 to 1980. In this final, Federer’s world No. 1 ranking, which he has held for more than four years, is also at stake.

One month before the final, Nadal destroyed Federer 6-1 6-3 6-0 in the final of the 2008 French Open. At Wimbledon, the Spaniard came with a mental edge and led two sets to none. Roger Federer won the next two sets in a tiebreak. The fourth set tie-break was an absolute beauty. Federer saved a match point with a remarkable long line backhand pass. ‘It was this point, this shot, which gave the match a mythic quality”, Federer said later.

The quality of tennis was truly exceptional this day. Nadal ended the match with 60 winners to 27 unforced errors and Federer with a ratio of 89 winners to 52 unforced errors, including that backhand in the net that led his rival to the glory.

Seeing No. 17 seed Federer and No. 9 seed Nadal meeting in the 2017 Australian Open final was something of a surprise. Back then, Djokovic and Murray were ruling the tour, and both the Swiss and the Spaniard returned from month-long breaks due to injuries.

Federer and Nadal split the first four sets, not playing well at the same time. The finals became legendary in the fifth set. Nadal led by one break, 3 games to 1, and Federer aligned 5 games in a row, producing what could be his best tennis ever. At 35 and a half years old, he won his 18th major title against his biggest rival. The Swiss had not won a Grand Slam title since 2012 Wimbledon and had not beaten Nadal in a Grand Slam since 2007.

Overshadowed in history by its sister of the following year, the 2007 Wimbledon final was a game of sheer drama and beauty. Nadal had improved considerably compared to the previous year, and at the start of the fifth set, he seemed stronger. But the Swiss tightened the game at the moment he needed most and finally won 7-6 (7) 4-6 7-6 (3) 2-6 6-2.

He leveled Bjorn Borg with a 5th consecutive win at the All England Club. At the time, the final was praised as the greatest Wimbledon final since Borg – McEnroe in 1980. At the trophy ceremony, Federer prophesied: “I’m happy with every title I get before he takes them all!”. This victory remained for long Federer’s last over Nadal in Grand Slams, before the Swiss defeated the Spaniard again in 2017 Australian Open final.

Federer had never seemed so close to be able to beat Nadal in Roland-Garros. The Swiss may regret the outcome of the first set. As in 2006, Switzerland made a terrific start and got a set point at 5-2 on Nadal’s serve. The Swiss tried to end the point with a drop shot, out for some centimeters. He then failed to close the set on his serve at 5-3 and the Spaniard finally won 5 games in a row to secure the first set.

This 26-shot rally, at 3-4 40A on Nadal’s serve in the 5th set of the 2017 Australian Open final can be considered as the greatest point between the two superstars.

Who is the best in Grand Slams?

As of April 2020, Roger Federer has won 20 Grand Slam titles, one more than his Mallorcan rival. Nadal is on a roll that could see him overtake Federer as he has won three major titles since Federer’s 20th in January 2018.

Both players have won all four Grand Slams in their careers.

In their Grand Slam encounters, Nadal leads 10 wins to 4. 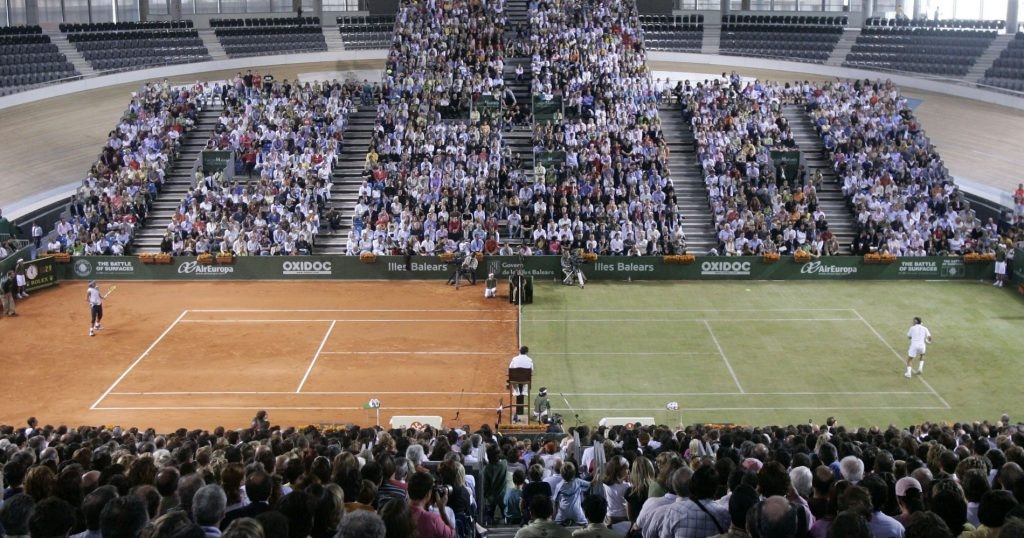 Roger Federer was born on August 8, 1981, while Rafael Nadal was born on June 3, 1986. Thus, Nadal is five years younger than Federer and could well pass the Swiss for the most Grand Slams titles.

The Spaniard won his 19th Grand Slams title before the Swiss did: 33 years and 2 months for Nadal, 35 years and 11 months for Federer.

Who has the best record against Novak Djokovic?

Roger Federer and Rafael Nadal are both led by a narrow margin by Novak Djokovic in their respective head-to-heads. But Rafael Nadal is leading in his Grand Slam record against the Serb. 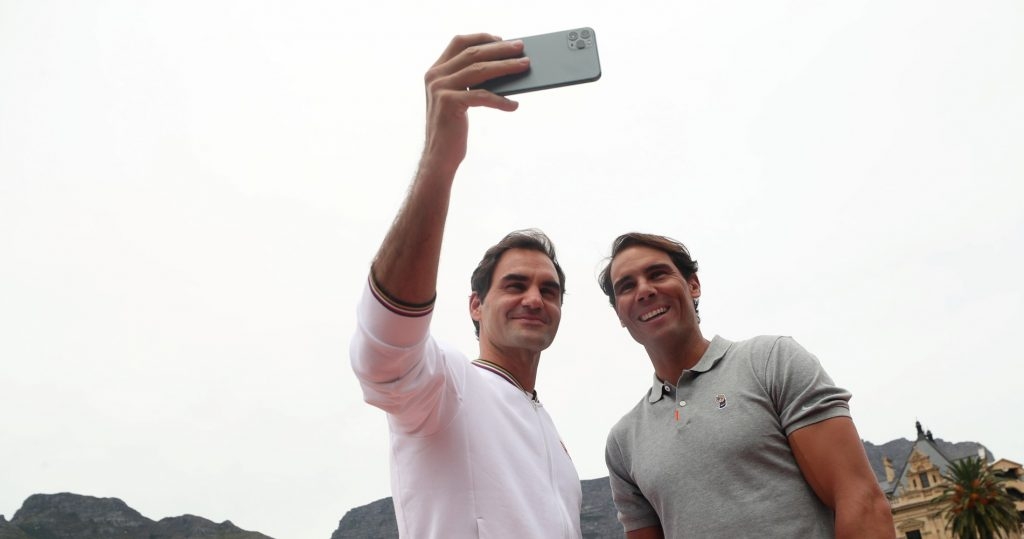 Federer vs Nadal: Are they friends?

Federer and Nadal have great respect for each other and exemplify fair play in sport. They also shared moments off-courts that helped to build a strong relationship.

Roger Federer exposed his view on his friendship with Nadal in 2019 during the Laver Cup: “To be honest, we understand each other very, very well,” he told TVA Sports. “What I like about Rafa is how open and honest we are one another. We respect each other so much. Are we best friends? I do not think so. He has better friends than me and me too. But in the end, it’s about respect. When we fight on the court, we are rivals.”

Nadal shares this vision. In April 2019, in an interview with fans organized by his sponsor Movistar, the Spaniard said: “The concept of a friend for me has a lot of meaning and is very powerful. For me, language is a barrier to establishing a bond as strong as a friendship, for example, with Roger Federer. We have that, the rivalry and that our habits of life are very different. I would say that I do not have friends, but very good companions.”

These two champions share more time off the court than the ATP tour routine requires. In October 2016, Roger Federer came to Majorca responding to Rafael Nadal‘s invitation to inaugurate his Academy in Manacor.

The two superstars also played many exhibitions against each other. In February 2020, Rafael Nadal responded to Federer’s invitation to take part in a charity match with him in Cape Town, South Africa, the birthplace of Federer’s mother, on behalf of the Roger Federer Foundation. The game took place in front of a record crowd of 51,054 spectators. During this South African trip, the two players appeared to enjoy a close relationship.

For this occasion they had replayed a legendary promotional video that had been made ten years earlier for a previous charity match:

They also shared some close moments together during the Laver Cup in 2017 and 2019, as when they coached each other during their singles matches. 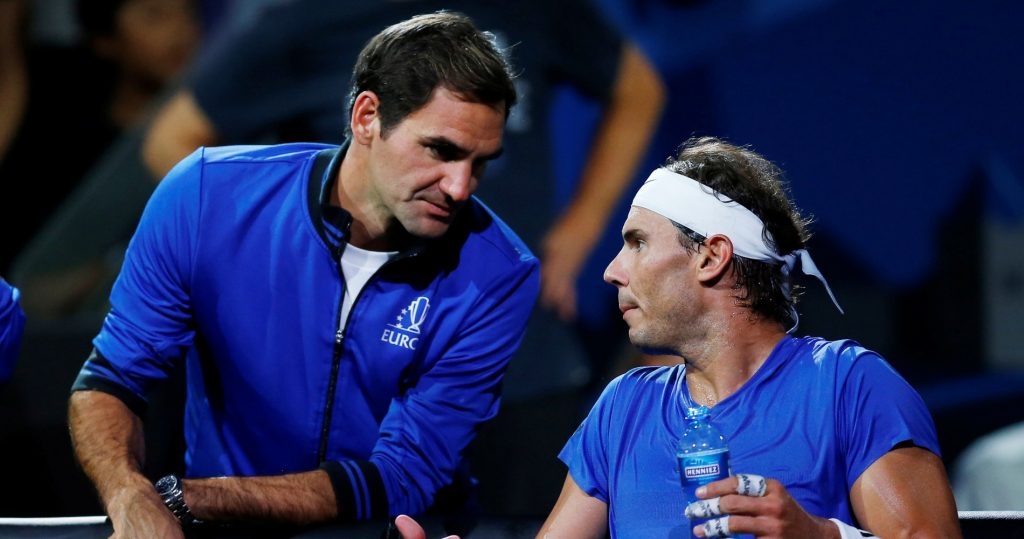