Davis Cup, junior Roland-Garros, Grand Slam quarter-finals, Fernando Vincente: Everything you always wanted to know about Andrey Rublev (but never had time to find out) – updated after ATP Finals

Andrey Rublev has established himself as a regular fixture in the men’s top 10. Find out the answers to some common questions you might have about the Russian

Who is Andrey Rublev?

Andrey Rublev is a Russian tennis player. He has won 12 titles on the ATP Tour, won the Davis Cup for Russia in 2021 and his career-high ranking is No 5, reached in September 2021. 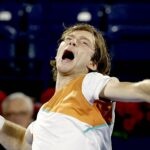 What did Andrey Rublev do at the Nitto ATP Finals in 2022?

Rublev qualified for the season-ending Finals for the third time, and reached the semi-finals for the first time after wins against fellow Russian Daniil Medvedev and Stefanos Tsitsipas.

What is Andrey Rublev’s stance on Russia’s invasion of Ukraine?

Andrey Rublev has been outspoken in his wish for peace in the wake of Russia’s invasion of Ukraine. He wrote “No war please” on the camera after winning the title in Dubai and then reiterated his stance in his press conference and in a post on social media.

In a recent documentary with YouTuber Vitya Kravchenko in mid-July, Rublev said he tried to negotiate with the All England Club to be able to compete there – despite the blanket ban on all players from Russia and Belarus.

The Russian revealed that he offered several suggestions that could enable him and other Russians to play at Wimbledon without endorsing the Russian government’s actions in Ukraine. 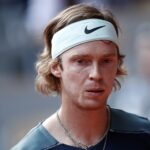 Read also
Rublev: There’s no war in tennis – I offered ideas so I could play at Wimbledon
Tennis Majors

Can Andrey Rublev continue to compete on the ATP Tour and at Grand Slam events?

As it stands, Andrey Rublev will be allowed to continue playing on the ATP Tour and the Grand Slam events, though he was excluded from tournaments in the United Kingdom, including Wimbledon.

The All England Club and Lawn Tennis Association announced in April that Russian and Belarusian players would not be permitted to compete in any tournaments in the UK, based on the directional guidance provided by the UK government for sporting events.

Rublev and other Russian/Belarusian players are currently not allowed to compete under their national flag on the Tour and other Grand Slams. Russia and Belarus will also be banned from team competitions — including Davis Cup — until further notice.

Read also
There is no logic to what they propose – Emotional Rublev’s critique of Wimbledon ban, updated with reactions across tennis
Tennis Majors

Andrey Rublev became only the fifth man to beat 11-time champion Rafael Nadal at the Monte-Carlo Masters when he knocked out the Spaniard in the quarter-finals. His 6-2, 4-6, 6-2 win made him the first man ever to beat Nadal in a deciding set in the event and handed the world No 3 his earliest exit there (tied) since 2003. Rublev then maintained his momentum to reach his first-ever Masters 1000 final but was denied the title by Stefanos Tsitsipas.

Rublev has won 12 titles on the circuit, five of which came in 2020 and four, so far, in 2022. His first trophy came 2017, in Umag, where he beat Paolo Lorenzi in the final. Since then, he has won tournaments in Moscow, Doha, Adelaide and then his first two ATP 500s, Hamburg and Saint Petersburg before adding a fifth 2020 title by beating Lorenzo Sonego in the final in Vienna. He won his eighth title in Rotterdam in March, 2021, beating Marton Fucsovics in the final. He also reached a second Masters 1000 final in Cincinnati in August, 2021. He won titles in Marseille, Dubai, Belgrade and most recently, in October, in Gijon.

Rublev has reached the quarter-finals of a Grand Slam six times. He was beaten at the 2017 US Open by Rafael Nadal, at the 2020 US Open by Daniil Medvedev, lost to Stefanos Tsitsipas at Roland-Garros in 2020 to Medvedev again at the Australian Open in 2021, to Marin Cilic in a fifth-set tiebreaker at Roland-Garros in 2022 and in straight sets to Frances Tiafoe at the US Open in 2022. 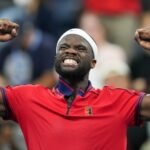 Andrey Rublev’s highest ranking to date is No 5, a mark he reached in September 2021.

As a junior, Rublev won the junior title at Roland-Garros in 2014 at the age of 16. In the final he beat Jaime Munar, who pushed Tsitsipas to five sets in the first round of Roland Garros in 2020. Also in 2014 the Moscow native won the bronze medal in singles and silver in doubles at the Youth Olympic Games in Nanjing.

According to the official ATP website, as of November 21, 2022 Andrey Rublev has earned almost $14.28 million in his career — including more than $4 million in 2022 alone. 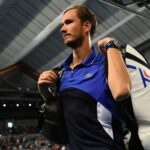