Novak Djokovic in 2020: GOAT in waiting remains in wait

Novak Djokovic started 2020 with a bang and finished with the year-end No 1 ranking, but the Serb had his share of struggles and turmoil as he fell short in his quest to add even more major titles to his name. 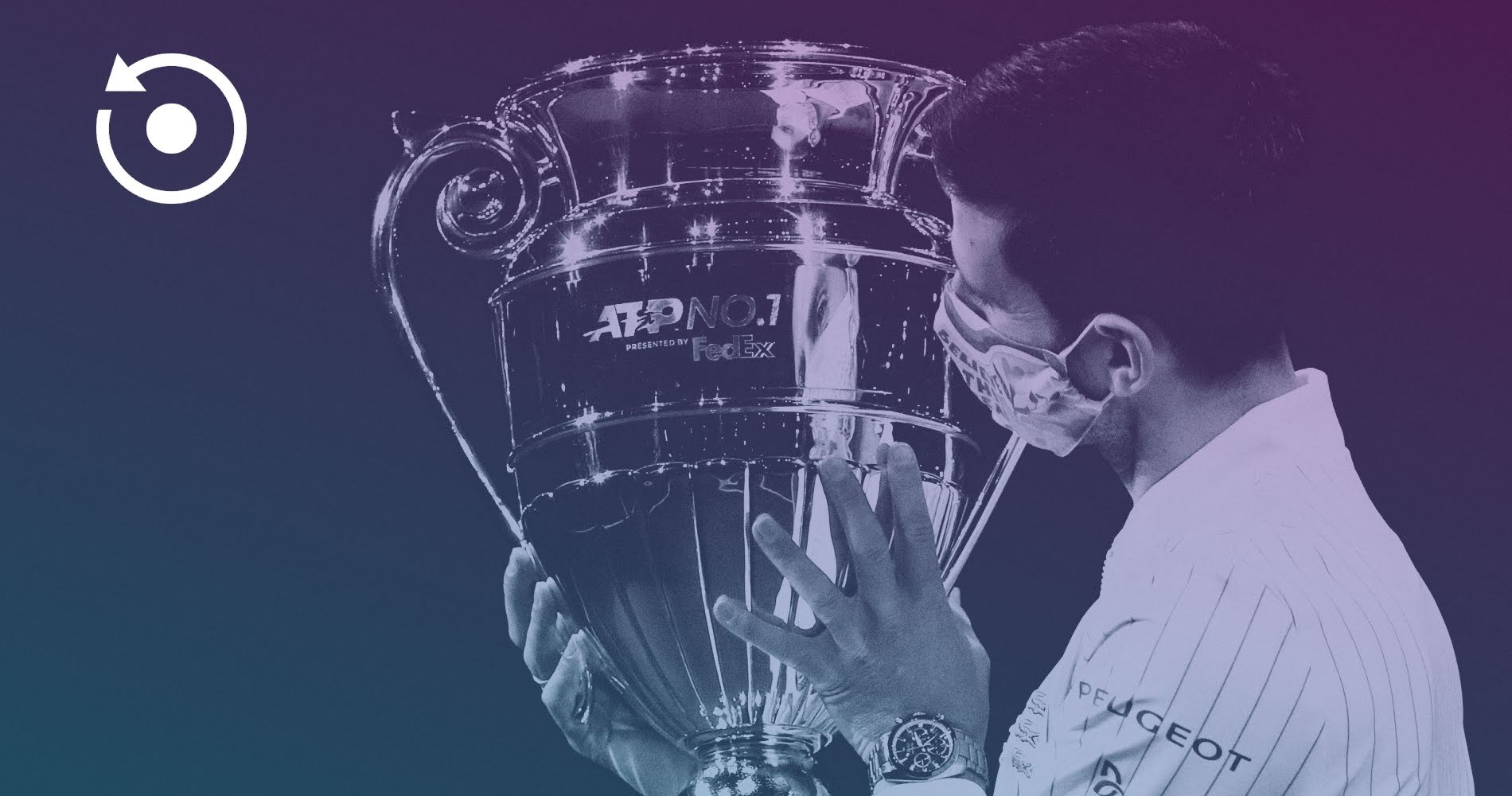 In a season that saw Novak Djokovic win his 17th Grand Slam title, achieve a record-tying sixth ATP year-end No 1 ranking and barely lose a match, strangely it feels like somewhat of a disappointment. Such is the lay of the land when you are a card-carrying member of the Big 3 – with lofty expectations such as those placed on Djokovic’s shoulders it’s never going to be easy to outperform.

Djokovic finished with a record of 41-5 with four titles to his name, and even won two of the three Masters 1000 titles on offer, pushing his total to 36. But the three biggest titles available after tennis restarted – US Open, Roland-Garros, and the Nitto ATP Finals – went begging and this is why it’s hard to classify Djokovic’s 2020 season as a slam-dunk success.

As he has does so often, Djokovic started the Australian Open on fire and claimed a record eighth title in Melbourne, where he defeated Dominic Thiem in a thrilling five-set final to claim his 17th major title. Djokovic’s jaw-dropping dominance at the Australian Open knows no comparison on the men’s side. The Serb has won all 16 of his semi-final and final matches, and he is now 15-2 lifetime against the top 5 at the Australian Open. 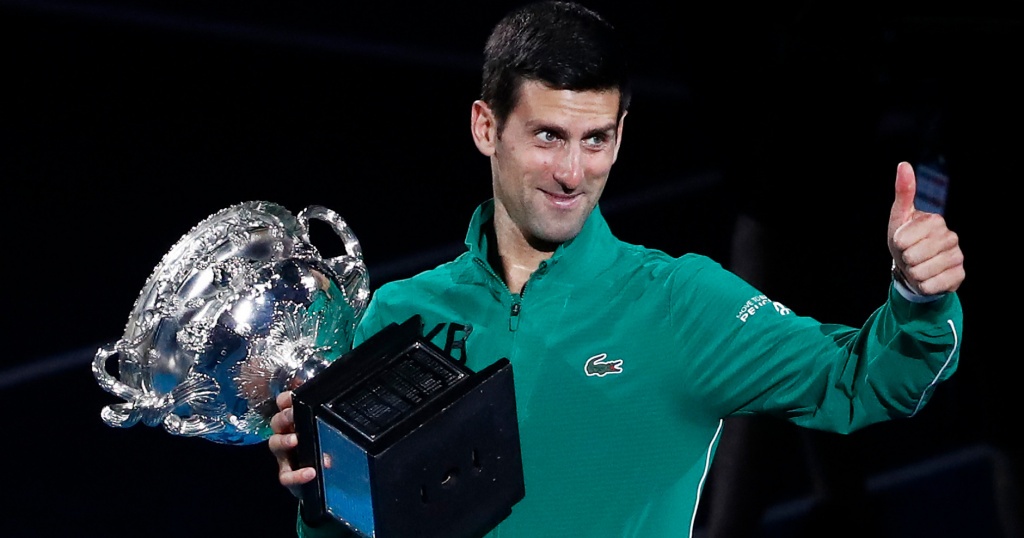 Djokovic played some amazing tennis throughout the season, and he was resilient both before and after the five-month break due to the coronavirus pandemic, but his best work was done in Melbourne. It was a unique triumph in the final for Djokovic, as he won from two sets to one down for the first time in his career in a Grand Slam final. Djokovic was 0-7 in major finals when trailing two sets to one heading into the fourth set with Thiem, and all men’s singles Grand Slam finalists were 2-46 in the last 48 times that they had fallen behind two sets to one, just to give you an idea of the enormity of his accomplishment in the Australian Open final.

Djokovic was a cool 26-0 on the season, with a soul-quenching title at the ATP Cup, the title in Australia, a fifth trophy lift in Dubai and a second triumph at Cincinnati (technically in New York this year — it’s a long story) before he finally ran into the worst possible scenario in his fourth-round match at the US Open. The Serb was defaulted after striking a lineswoman with a ball and his winning streak was snapped as his season took a turn for the worse.

It’s hard not to speculate on what might have happened to Djokovic had the ball he hit in the direction of the lineswoman been a metre to the left or right. Would we have seen him continue streaking through New York, winning the US Open instead of Thiem? It’s impossible to say, but interesting to contemplate.

It was a moment to rival Serbia’s electric Davis Cup triumph in 2010. And it was the perfect spark for another breathtaking run at the Australian Open. Serbia’s title at the inaugural ATP Cup kicked off the 2020 season on the right note for Djokovic, and he performed perfectly as the team’s spiritual leader and its on-court savior, lifting his squad on his shoulders whenever necessary. Djokovic went undefeated in the event and saved his best for last, continuing his hard-court dominance over Rafael Nadal in the final before teaming with Viktor Troicki to clinch the cup with a doubles triumph.

“I’ll remember this experience for the rest of my life as definitely one of the nicest moments in my career,” Djokovic said. “I’ve been very fortunate and blessed to have an amazing career the last 15 years, but playing for the team, playing for the country with some of my best friends for a long long time, you can’t match that. That’s just too special.”

There was also Djokovic’s consistent assault on the record books via rankings milestones. Tying Pete Sampras with his sixth ATP year-end No.1 ranking and closing to within 15 of the all-time record for weeks at No 1 was another high point. Djokovic is set up to thrash the record books again in 2021.

🇷🇸 @djokernole has tied Pete Sampras' record for most year-end finishes at No. 1 in the @fedex ATP Rankings. 👏

Low point: The US Open catastrophe

Djokovic was hoping for a shot of redemption after his reputation took a hit for his role in the Adria Tour, the charity event that made headlines for its blatant disregard of the coronavirus pandemic and led to positive Covid-19 test results for many players, including Djokovic himself. He showed up in New York as the heavy favorite, undefeated on the season and eager to make a positive impact, both on and off the court.

But his ill-fated disqualification from the round of 16 at the US Open would kill his winning streak, his momentum, and leave a bitter taste in his mouth for the rest of the season.

As always, Djokovic was active on social media in 2020 and the world No 1 kept his fan based engaged with updates from his adventures around the world.

Even though I’m standing by myself here, this trophy equally belongs to all of my family, #TeamDjokovic, #NoleFam, and people who always believed in me and tirelessly supported me on this wonderful journey. I am very happy to celebrate another big milestone here in London. pic.twitter.com/GtL4dPZft5

Djokovic stayed in the spotlight off the court with the aforementioned escapades at the Adria Tour, which made headlines for many reasons, some good and some bad. There were strong emotions for Djokovic, who so rarely gets to play on home soil in front of his fellow Serbians, and there was also the well-documented partying, which was criticized by many and considered tone-deaf during the pandemic.

Djokovic was also in the news non-stop for his role spearheading the PTPA, the organisation built to provide players with means of negotiating independently on behalf of the players. The fledgling group has many backers, but it is also receiving pushback from the tour and has yet to gain the support of key figures like Rafael Nadal, Roger Federer and Andy Murray. Just last week Djokovic’s attempt to rejoin the ATP Player Council in order to give the group a louder political voice was rebuffed by an ATP vote. It remains to be seen how it all will play out, and whether or not the PTPA has a future in the sport.

Finally, the 33-year-old engaged in several controversial talks posted on Instagram with Chervin Jafarieh, discussing healthy and wellness topics. Both Djokovic and his wife also came under fire for various Instagram posts about the coronavirus, from conspiracy theories to anti-vaccination sentiments.

After his loss to Dominic Thiem, which ended his season at the ATP Finals, Djokovic summed up the positives and the negatives of a turbulent, historic season.

“I would say “OK” – I have had better and I have had worse. I have won one Grand slam title, played the final in another one and I am year-ending world number one. When I think about it, it is not just “OK”, it was a great season, but I strive to be better and I think that I can do better. Right now, after this kind of ending, it feels bitter, but at least near the end I have played my style of tennis and I fought until the end.” 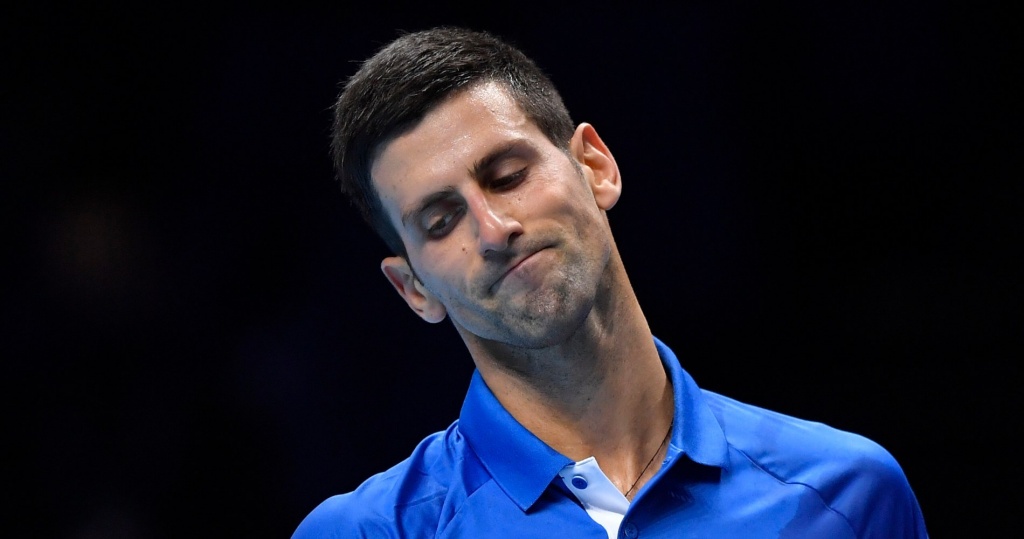 Novak Djokovic’s 2020 season could have been better, but only because of the lofty standards that the world No 1 has set for himself. The player of the last decade has kicked off a new decade in the loudest possible way. He won a Slam and claimed the inaugural ATP Cup in the first three months, all before kicking up a firestorm of controversy due to the pandemic and his transgressions in New York City. When it was all said and done Djokovic’s season hinged on one big match in Paris in October. The fact that he wasn’t able to overcome Rafael Nadal in the Roland-Garros final has set him back in the all-time Grand Slam titles list and he still has plenty of work to do if he wants to achieve true GOAT status.

The good news is is that he’s the youngest of the Big Three, and appears hungrier than ever to rewrite tennis’ record books. If he can shake off a rough conclusion to what could have been one of his finest seasons ever, he should be able to do just that.