Every day, Tennis Majors takes you back to one of the special moments in tennis history. On this day in 2006, Roger Federer achieved a lifelong dream of winning his hometown event and started a unique tradition with the ball boys in Basel

Roger Federer was born in 1981 in Basel. After he finished 1998 as the world’s top-ranked junior, Federer performed well in his first professional outings; in his first five main tour appearances in 1998 and 1999, he reached the quarter-finals three times in Toulouse, Marseille and Rotterdam. His smooth game and fine groundstrokes amazed the world tennis and soon, he was tipped as a future world No 1 candidate.

In the 1990s, the Swiss Indoors became a part of the ATP World Series, and remained one of the most prestigious indoor tournaments in the world, won by the likes of Boris Becker (1992), Michael Stich (1993) and Pete Sampras (1996).  The event took place at the St. Jakobshalle, an indoor venue with a capacity of 9,000 spectators.

The facts: Federer wins and then orders pizza for the ball boys in Basel

In October 2006, despite all his incredible accomplishments, two important titles were still missing from Federer’s trophy cabinet: Roland-Garros, and the Swiss Indoors in Basel.

The Swiss genius was born and had grown up in Basel, and was also a ball boy at the tournament in 1993.

“I loved being a ball boy here,” Federer told Tennis TV. “I was able to see the best players in the world first-hand and see how they would prepare, how they would sweat, how they dealt with the pressure. They’re good moments for me.”

“I was never going to win, period. That was it. Because I thought I had two chances, I wasted both opportunities… You don’t get many more opportunities,” Federer said to atptour.com in 2018.

Nevertheless, on October 29, 2006, Federer, who was now the undisputed world No 1 for almost three years, had a third chance to win the title in his hometown. In order to get into the final, the maestro survived a major scare in the semi-finals , prevailing only 6-4, 3-6, 7-6 against Paradorn Srichaphan. In the final, he faced world No 7 Fernando Gonzalez, whom he had just beaten in the final of the Madrid Masters 1000 (7-5, 6-1, 6-0).

Although the Chilean was in great shape, Federer had a comfortable 8-0 lead in their head-to-head. After claiming 10 titles in 2006 already, the Swiss was full of confidence, and he didn’t give Gonzalez a chance, hitting 14 aces and losing only 17 points in 15 service games. After one hour and 59 minutes of play, Federer eventually triumphed in front of his home crowd by the score of 6-3, 6-2, 7-6(3).

The world No 1 didn’t forget his past as a ball boy at the Swiss Indoors, and he began his own tradition: post-final pizza parties with the ball boys.

“I had to wait for it,” Federer said in 2018. “It was hard for me. Then in 2006, finally, it all worked out, I got my first Basel and then everything changed forever. I knew I could do this result again. And I was able to defend and to handle pressure and all the expectations that surrounds this tournament for me. It’s been a wonderful tournament for me, especially doing it from being a ball boy here for two years, it’s a great feeling.”

What next? Federer goes on to win the Basel title 10 times

Gonzalez would achieve his most biggest result at the 2007 Australian Open, where he would reach the final, defeated by none other than Federer (7-6, 6-4, 6-4). This performance would propel him to his best career ranking, world No 5.

In total, both players would face each other 13 times before Gonzalez’s retirement in 2012. Only once would the Chilean prevail against Federer, winning their round robin match at the 2007 Masters Cup (3-6, 7-6, 7-5).

Read also
February 26, 2007: The day Roger Federer broke the record for weeks at No 1
Tennis Majors 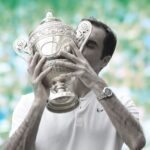 Read also
June 18, 2018 : The day Roger Federer beat his own record to become the oldest player to claim the world No 1 ranking
Tennis Majors