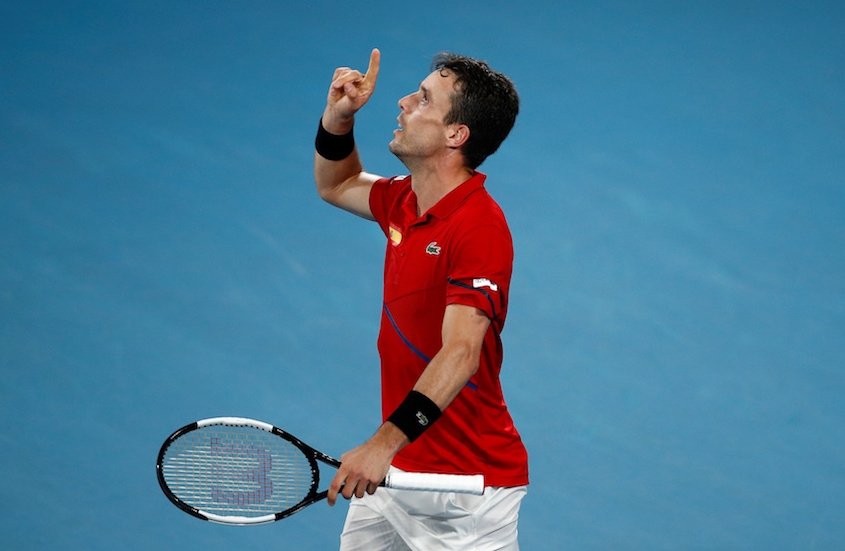 Every time Spain needs him, Roberto Bautista has guts. In a battle of two in-form No. 2s in Sydney, Spain’s Roberto Bautista Agut defeated Serbia’s Dujan Lajovic 7-5, 6-1 to get his country off to a flying start in the inaugural ATP Cup final. An astounding 6-0 in singles, the world No. 10 was virtually unstoppable this week. Rafael Nadal now takes on historic rival Novak Djokovic to seal a perfect — and obviously unprecedented — Davis Cup/ATP Cup double for Spain.

More news in a few minutes…

Despite falling an immediate break behind, 0-3, Lajovic put in a fight to come back to 3-3 and survive, saving two break points at 2-3 and one more at 3-4.

But he kept shying away from his baseline and ultimately could not keep up with Bautista Agut’s metronome groundstrokes, getting broken while serving to stay in the set at 5-6.

That’s when it all came crashing down for Lajovic. Fifteen minutes later, he found himself a double break down in the second set and the matter was settled.

It was the crown jewel of Bautista Agut’s ATP Cup campaign, during which he only faced two top 100 players in Lajovic (34th) and Nick Kyrgios (29th). Would it have changed anything given the Spaniard’s current form, though?

Now world No. 1 Rafael Nadal takes on world No. 2 Novak Djokovic in the first ‘Rafole’ of the 2020s decade. Should Nadal lose, he would pair up with Pablo Carreño Busta for the decisive doubles rubber, just like he did against Belgium in the quarterfinals.