Dimitrov stuns Tsitsipas, Thiem steams past Garin – what happened on Day 4 in Vienna

Grigor Dimitrov rallied to notch his first top 5 win of 2020 against Stefanos Tsitsipas, while Jannik Sinner had to retire with an injury. Here’s what happened on Thursday at the Erste Bank Open in Vienna. 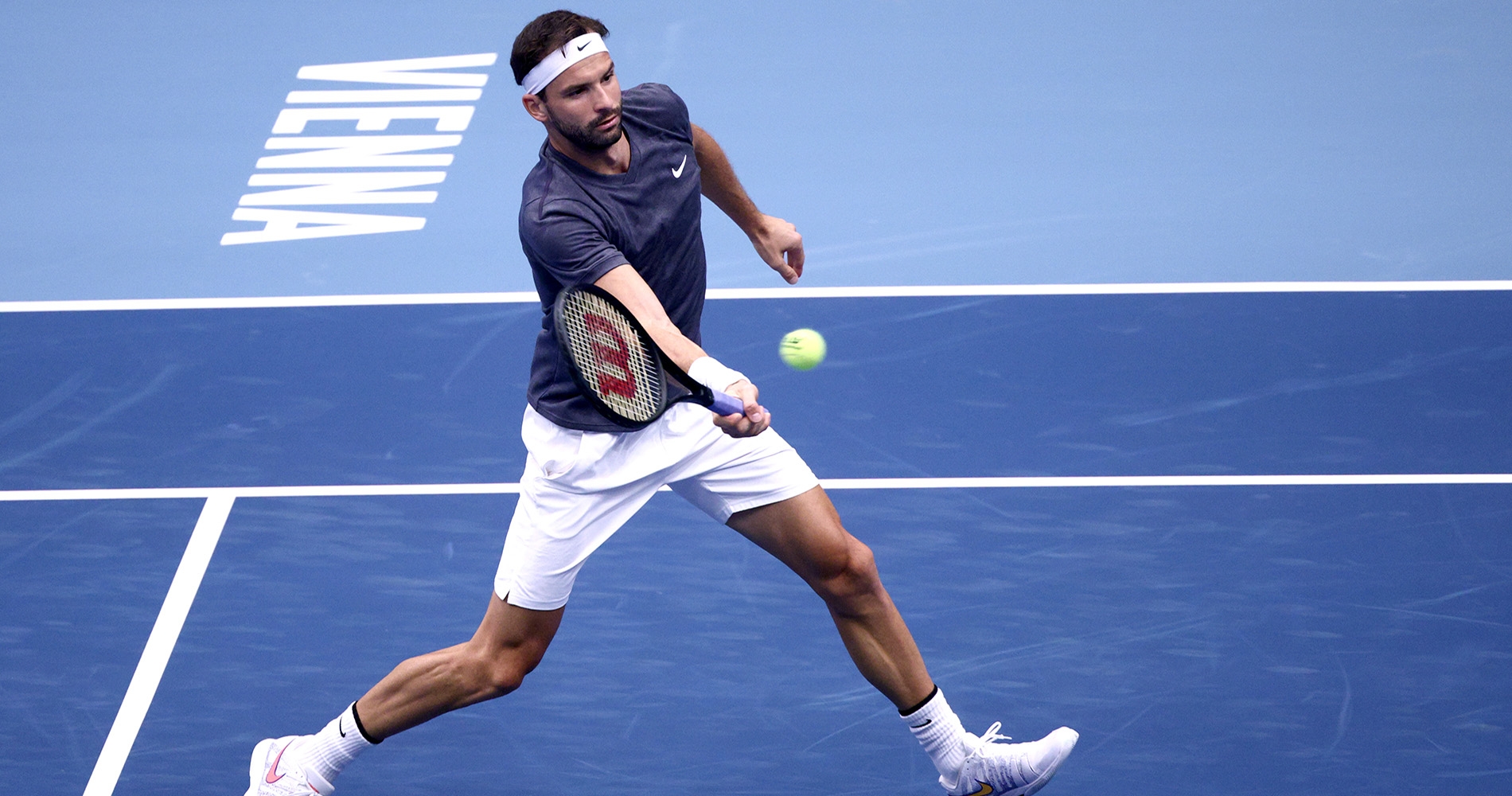 Jannik Sinner’s early retirement against Andrey Rublev put a damper on Day 4 of the Erste Bank Open in Vienna. But action picked up from there as Daniil Medvedev and Dominic Thiem took care of business to reach the quarter-finals. Then there was the big shocker of the day, which came in the final match of the evening…

Dimitrov gets a giant win over Tsitsipas

Grigor Dimitrov played one of those perfect indoor sets – zero break points faced and authoritative ball-striking – but the Bulgarian sadly had only a one-set deficit to show for it after he blew a 5-0 lead in the tiebreaker and lost the final seven points of the opener to Stefanos Tsitsipas. How would the Bulgarian recover from that crushing missed opportunity?

“I kept on believing, I kept on doing the right things and stayed in the match, which I think was the most important thing,” Dimitrov said of his comeback. You always have to be ready, so I was just focusing on the most simple things of the game.”

"I kept on believing, I kept on doing the right things and stayed in the match, which I think was the most important thing." @GrigorDimitrov on how he got over losing a 5-0 lead in first set tiebreaker and defeated Stefanos Tsitsipas in three sets at #ErsteBankOpen pic.twitter.com/wIWP2kBBPN

Dimitrov’s play has been on the rise of late. He needed some time to find his balance after being diagnosed with Covid-19 this summer. But his results since the US Open have been strong. He reached the quarter-finals at Rome and the second week at Roland Garros, where he fell to Tsitsipas in straight sets. After a semi-final run at Antwerp Dimitrov has come to Vienna ready to play spoiler. He is one of four unseeded player to have reached the quarter-finals and he will take on Dan Evans on Friday.

Quarters are set at #ErsteBankOpen

Who plays the semis?

The Bulgarian says he’s just thankful to have the opportunity after all he’s been through.

“The rounds are getting tougher and tougher, which is normal,” he told the crowd after his win. “But I like my chances. I’m just very pleased to play in front of you guys – it’s been a while [since I] played in front of a crowd, so I’m appreciating this moment.”

Everybody was looking forward to a mouthwatering clash between Jannik Sinner and Andrey Rublev for a spot in the quarter-finals on Thursday. Unfortunately it was over not long after it started as the 19-year-old Italian was forced to retire with an undisclosed injury just three games in. Sinner missed a forehand to hand Rublev a break in the third game, turned to his coach Riccardo Piatti and gave him the signal that he wasn’t good to go after only five minutes of play.

The official prognosis? A right foot injury for Sinner.

Jannik Sinner retired due to a right foot injury. https://t.co/zbPQSwZWSe

Rublev slides into the quarter-finals at Vienna, where he will take on Dominic Thiem. The Russian, who holds a share of the ATP title lead (4) in 2020 along with Novak Dj0kovic, improves his record in 2020 to 36-7, and stretches his current winning streak to seven.

How did the big guns fare?

Top-seeded Novak Djokovic was not in action on Thursday, but the remaining four top 5 seeds all saw action.

No 4-seeded Daniil Medvedev is enjoying a bit of a resurgence in his Vienna Debut. The 24-year-old Russian had dropped four of his last five encounters heading into this week, but he’s acquitted himself nicely in Vienna to reach his fourth quarter-final of 2020.

There was even a tricky little underarm serve from the Russian. It missed the mark, but set the table for a second-serve ace.

Medvedev had to battle back from a set down against Vasek Pospisil, the man who knocked him out of this year’s draw at Rotterdam, to earn his 18th win of 2020. After dropping the opener, the world No 6 progressed through a tense second set, saving a break point at 3-3 and then reeling off nine of the final 11 games to book his spot in the last eight. It was a lopsided final set, one that saw Medvedev convert both of his break opportunities and win 30 of the 48 points played.

No 3-seeded Stefanos Tsitsipas, as was mentioned above, fell to Grigor Dimitrov in three tight sets. Four of the top five seeds – Djokovic, Thiem, Medvedev and Rublev – have made it through to tomorrow’s quarter-finals.

The Thiem dream is very much alive in Vienna this week. No 2-seeded Dominic Thiem notched a fairly routine victory over Chile’s Cristian Garin, 6-3, 6-2, and the contest featured some vintage attacking tennis from the Austrian. Thiem needed just 65 minutes to dispatch the world No 22, and he dropped only ten points on serve and never faced a break point.

Garin, who scored one of his biggest career hard court wins against Stan Wawrinka on Tuesday, was unable to get on track against the defending champion.

One Italian did manage to get through on Thursday and that was Lorenzo Sonego. The 25-year-old world No 42, a lucky loser this week in Vienna, topped Poland’s Hubert Hurkacz, 7-6(6) 7-6(2). The Turin native improves to 2-1 lifetime against Hurkacz, and will face Serbia’s Novak Djokovic in the quarter-finals on Friday.

Sonego has never faced a player ranked higher than No 3 in his career, and his best career victory by ranking came against world No 12 Karen Khachanov at Monte-Carlo last year. Sonego’s win over No 31-ranked Hurkacz today stands as his best ever win by ranking on a hard court – he’s 4-12 lifetime against the top 50 on the surface.

Dan Evans was also a winner on Thursday in Vienna. The Brit took out Austria’s Jurij Rodionov, 7-5, 6-3, and will face Dimitrov in the quarter-finals.

In a rematch of the Roland-Garros men’s doubles final (also won by the Germans), Kevin Krawietz and Andreas Mies topped Mate Pavic and Bruno Soares, 6-1, 4-6, 10-8 to set a semi-final with third-seeded Lukasz Kubot and Marcelo Melo. Melo and Kubot stopped Jurgen Melzer and Edouard Roger-Vasselin 7-5, 6-3 on Thursday.

The other semi-final will feature two unseeded teams: Robert Farah and Fabrice Martin will square off with Jamie Murray and Neal Skupski after Murray and Skupski were handed a walkover by Rajeev Ram and Joe Salisbury on Thursday.