Once tipped to be the next Novak Djokovic, Borna Coric has experienced plenty of ups and downs in his career. But as 2020 draws to a close, he’s heading back towards the world’s top 20 and reflects on the biggest battles of his career so far. 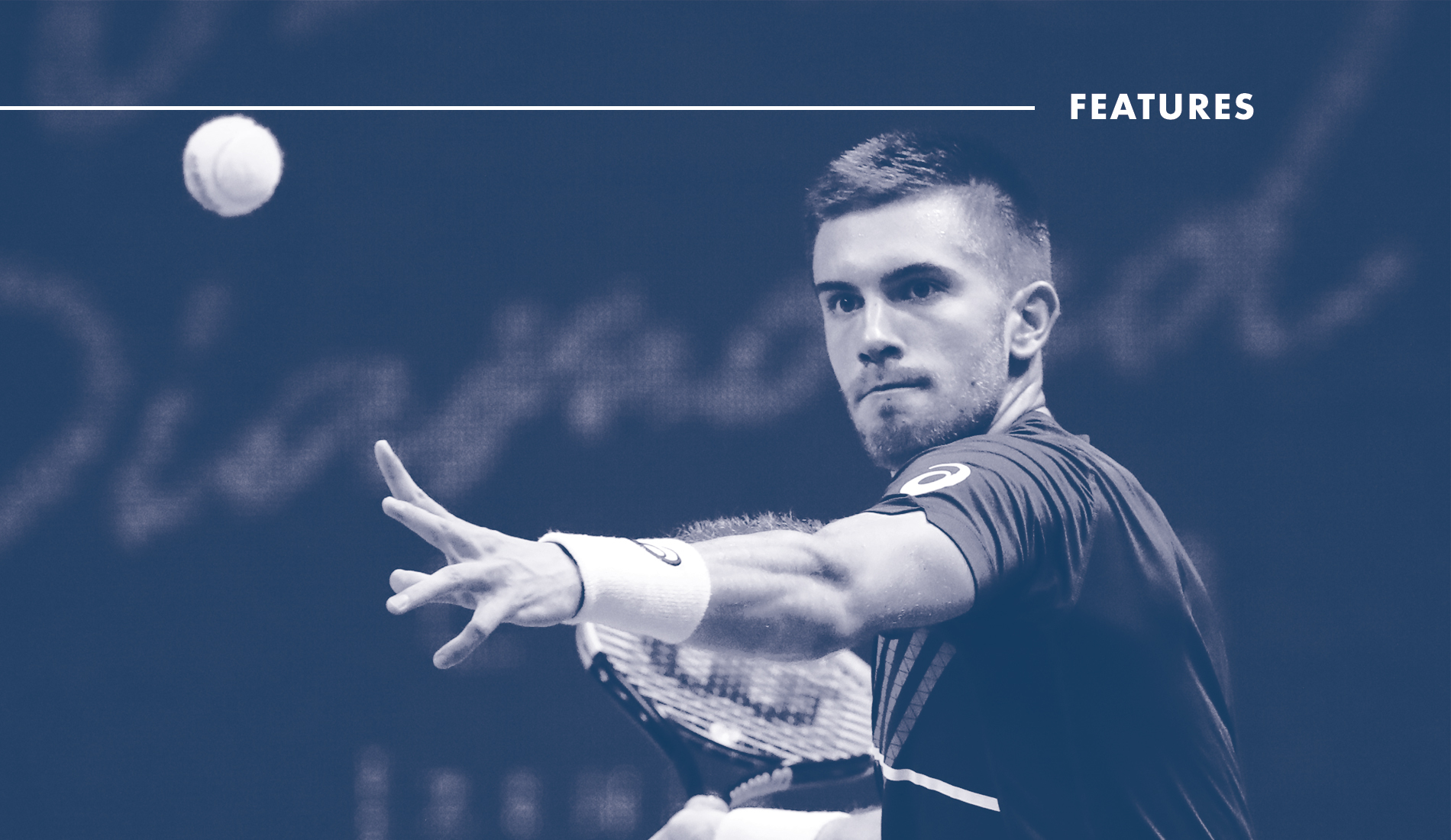 With the majority of the tennis world focused on the drama of Novak Djokovic’s disqualification, a few hundred metres away at Louis Armstrong Stadium in New York, something significant was happening as well. Years of hard work finally came to fruition when Borna Coric from Croatia made his first Grand Slam quarter-final by taking out Jordan Thompson in straight sets. It had been a long and a bumpy road, but Coric never doubted himself. And it was no fluke, either, because he is having a great season altogether.

Rewind to 2015, a Davis Cup tie in Kraljevo, Serbia. Coric and I were standing in a locker room talking. He had only just turned 18 a few months ago, but what was most striking about him was his maturity and clarity, something that sticks to this day. 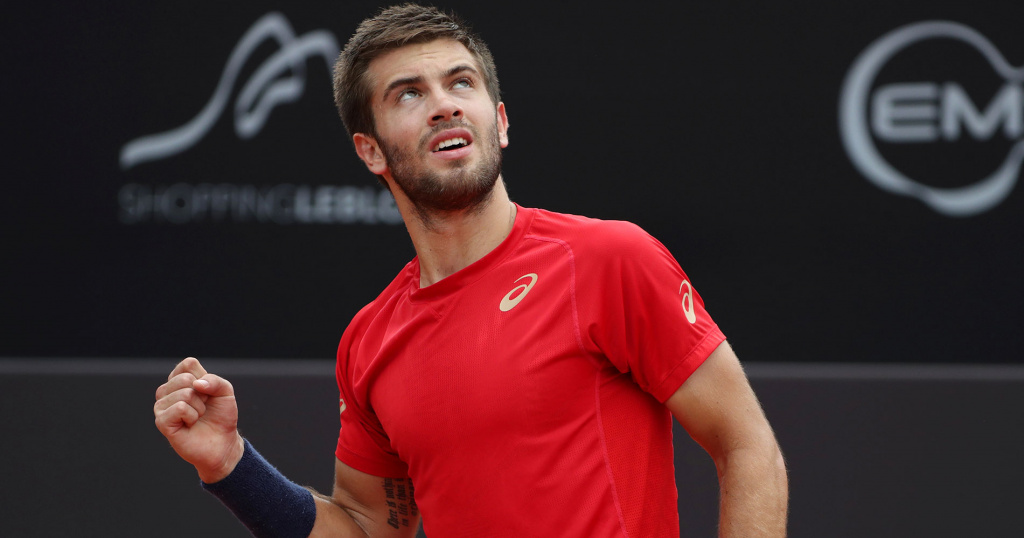 “I don’t think it should be called arrogance if I state my goals clearly,” he proclaimed.”

Those goals were, and remain today, ambitious. Up until then, his rise had been meteoric. The No 1 junior in the world, capped with a US Open title, made a fast breakthrough into the world of big boys – in October 2014, Coric defeated world No 3 Rafael Nadal in Basel to reach the semi-finals, a run which saw him crack the top 100 for the first time (watch the hot shots here).

He quickly became a top 50 player (soaring as high as No 33 in August 2015), was awarded the “ATP Star of Tomorrow” for being the youngest player in the top 100, and many had started comparing him to Novak Djokovic. But Coric then hit a wall and his progress halted.

“I haven’t felt any additional pressure, I am being honest here – the only pressure I feel is when I look at myself in the mirror, I need to know that I have done everything in my power to be the best that I can be. But still, you get used to hearing that you are the best, that you are the next Novak or the next Federer – then my expectations have become unrealistic thinking I was going to be top 10 quickly, but it doesn’t work that way.”

Although he had won his first ATP title in Marrakesh by saving five match points and beating Philipp Kohlschreiber, for three years Coric faltered and was unable to break through to the top 30. He was always a great mover and his backhand was rock solid, but he was struggling to finish off points quickly and failed to attack shorter balls with his forehand. The serve also needed work and, perhaps most crucially, his confidence was shaken too when the initially huge expectations weren’t met.

To make matters worse, injuries had started to creep in and he underwent a season-ending knee surgery in 2016. There were a few niggles here and there after that as well, but there is one thing that everyone knows about Coric by now – he rarely makes excuses. He is known for his hard work, but admits there were times when he wavered, going out too much and not being entirely focused on tennis.

“Everyone’s body is different and it’s a part of the game, just like the forehand or anything else. Yes, the knee kept me out for about half a year, but I wasn’t going about things entirely professionally. I didn’t really dedicate myself to tennis the way I knew I could, so I wasn’t deserving of a step forward.” 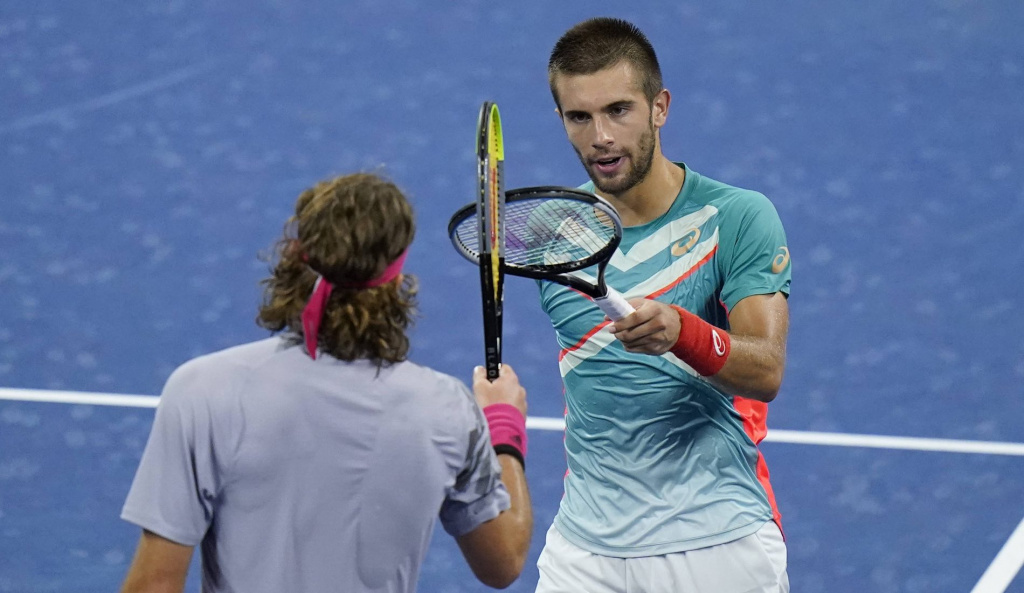 Consistency is a word often used in tennis and it applies perfectly to Coric’s style of play. Looking at the examples of the best players in the world, consistency in the coaching department is also of utmost importance. For one reason or another, Coric lacked that and has changed coaches frequently – Zeljko Krajan (2014-2015), Thomas Johansson (2015), Miles Maclagan (2016), Ivica Ancic (2016-2017), Riccardo Piatti and Kristijan Schneider (2017-2019), Antonio Veić (2019) and finally his current coach Martin Stepanek.

“I am not going to deny it, I was difficult to work with before, high-maintenance if you like, and now I am more easy-going. But I really have never been type of guy that fires a coach after two first-round losses. Actually, looking back at all my coaches, only with one it was entirely up to me, where I felt we weren’t working well and I decided to end it. With everyone else there were different issues – personal problems on their side, or inability to reach an agreement in regard to finances, or that the coach wasn’t able to travel enough weeks with me, things like that.”

Time was flying by and Coric was no longer the talk of the town. Alexander Zverev, Stefanos Tsitsipas, Denis Shapovalov and a host of other youngsters were posting impressive results and making a name for themselves, leaving him behind. However, he kept grinding and believing until it all came together in 2018. Coric credits Piatti for changing his career, but the man he had a particularly “great vibe” with was Kristijan Schneider, most evidently seen during his matches by their positive body language communication.

The breakthrough and back injury

Coric was compared to Djokovic in the early stages of his career because of his footwork and backhand, but also for another reason – early in the Serb’s career he too had struggled with stepping in and being more aggressive off the forehand side. In March 2018 Coric was finally able to do that with increasing consistency and he was causing more damage with his serve, one aspect of his game he had worked on thoroughly.

“When you rely on only one type of serve, you become predictable after 10 minutes. It all depends on the day, surface and the profile of the opponent, but one needs to have a lot of variations with his serve. Speed and power are there, but I need to be more accurate.”

Coric was up a set and a break against Federer in the Indian Wells semi-finals and eventually lost, but it was a sign of big things to come – a quarter-final in Miami the following week, his first Series 500 title in Halle overcoming Roger Federer in the final, and his first second week of a Grand Slam losing to Juan Martin Del Potro in the fourth round of the US Open.

Unlike some of his impressive wins of the past (over Nadal, Andy Murray and more), these achievements didn’t feel like one-off events, this time there was real substance behind them. At last, Coric was relying on his instinct, not shying away from taking the initiative, staying close to the baseline and winning more cheap points with his serve.

He achieved a career-high ranking of No 12 following a great run at the Shanghai Masters 1000 event, beating top seed and defending champion Federer en route to the final where he lost to an in-form Djokovic. The cherry on the top was winning the Davis Cup with Croatia which saw him round off an extremely successful year.

After making it to the fourth round of the 2019 Australian Open and the semi-finals in Dubai, it seemed that Coric was going to build on a huge 2018 and make the coveted top 10 sooner rather than later.

However, a sudden split with coach Schneider due to health issues, and dealing with some injuries of his own, meant that he was unable to take that next step despite being within touching distance.

As he was defending a lot of points from 2018, he tried to play through that pain, which he managed fairly successfully for some time, but eventually he was forced to retire in the quarter-finals of Halle due to a lower back strain. He missed Wimbledon and withdrew before his second match at the US Open for the same reason. Although he made it to the final in St Petersburg, the first-round loss to Andrey Rublev in Shanghai meant that he would finish 2019 ranked outside of the top 20.

Not a year Coric had been hoping for, but starting from scratch isn’t something that he is unfamiliar with. Along with his new coach Martin Stepanek, whom he describes as a “simple guy, just like me”, he rebuilt his physique and regained fitness, crucial to his style of play.

Throughout the years, Coric has learned the virtue of patience, so he wasn’t fazed when there were more downs than ups at the start of the 2020 season before the pandemic hit. Together with fellow Croat Borna Gojo, Coric spent six weeks in a house in the mountains near Split. They had a huge yard where they were able to practise before going running in the mountains. The result was that Coric gained 11 pounds of “pure muscle” without losing any of his quickness.

Just in case you were wondering how at this year’s US Open, Coric managed to recover from his four-and-a-half hour long match with Stefanos Tsitsipas (and a match that lasted four hours and 20 minutes against Juan Ignacio Londero before that) in order to beat Jordan Thompson in straight sets, there is your answer.

He did lose to Zverev in the quarter-finals despite being a set and a break up, but once again, Borna believes in his body, believes that he can run all day and that he can outlast his opponents – perhaps a bit paradoxically, but it is exactly this that allows him to be more aggressive and to transform into the Borna Coric 2018 edition.

And even better, the concept of “controlled aggression” is something that he is striving for – a casual fan often asks themselves in front of the TV, “Why isn’t he being more aggressive?” but it’s a complex issue.

“It depends on numerous factors (whether he’ll be aggressive). The surface, my gut feeling, am I confident or not, if I am moving well and feeling fresh, have I got the right feel for the ball, the opponent’s style of play… A lot comes into it, but generally speaking, I am a far better player when I am being aggressive, not just retrieving, even though I am perhaps making a bit more errors. You could see that on display in New York and me being aggressive, along with further improvement of my serve, are two of the biggest emphasis of my work with Martin. I am not there yet, but if I am healthy and able to maintain the level I had at the US Open, then I can get close to Top 10. But it’s still a long way to go.”

Just like many other players, he had a tough time with the quick transition to clay. It was an underwhelming campaign with a 1-2 record and a disappointing loss to Norbert Gombos in the first round of the French Open, but the Croat found his groove on hardcourts once again, playing brilliantly in St Petersburg and showing mental fortitude many times when down on the scoreboard. Overall this year, Coric is 5-0 in deciding sets, holds a 5-5 record against better-ranked players and has reached a final at an ATP event for the fifth consecutive season.

Furthermore, don’t forget, even though he has been around the block a few times already, Coric turns just 24 in November and sees himself on the ATP Tour for (at least) 10 more years.

The best is definitely yet to come.