After almost five months away because of the Coronavirus pandemic, the ATP Tour is due to resume on August 14 with the Citi Open in Washington. In an exclusive interview, Mark Ein, who runs the management of the tournament, told Tennis Majors he feels a special responsibility as the first event back but still fears cancellation because of things beyond his control. 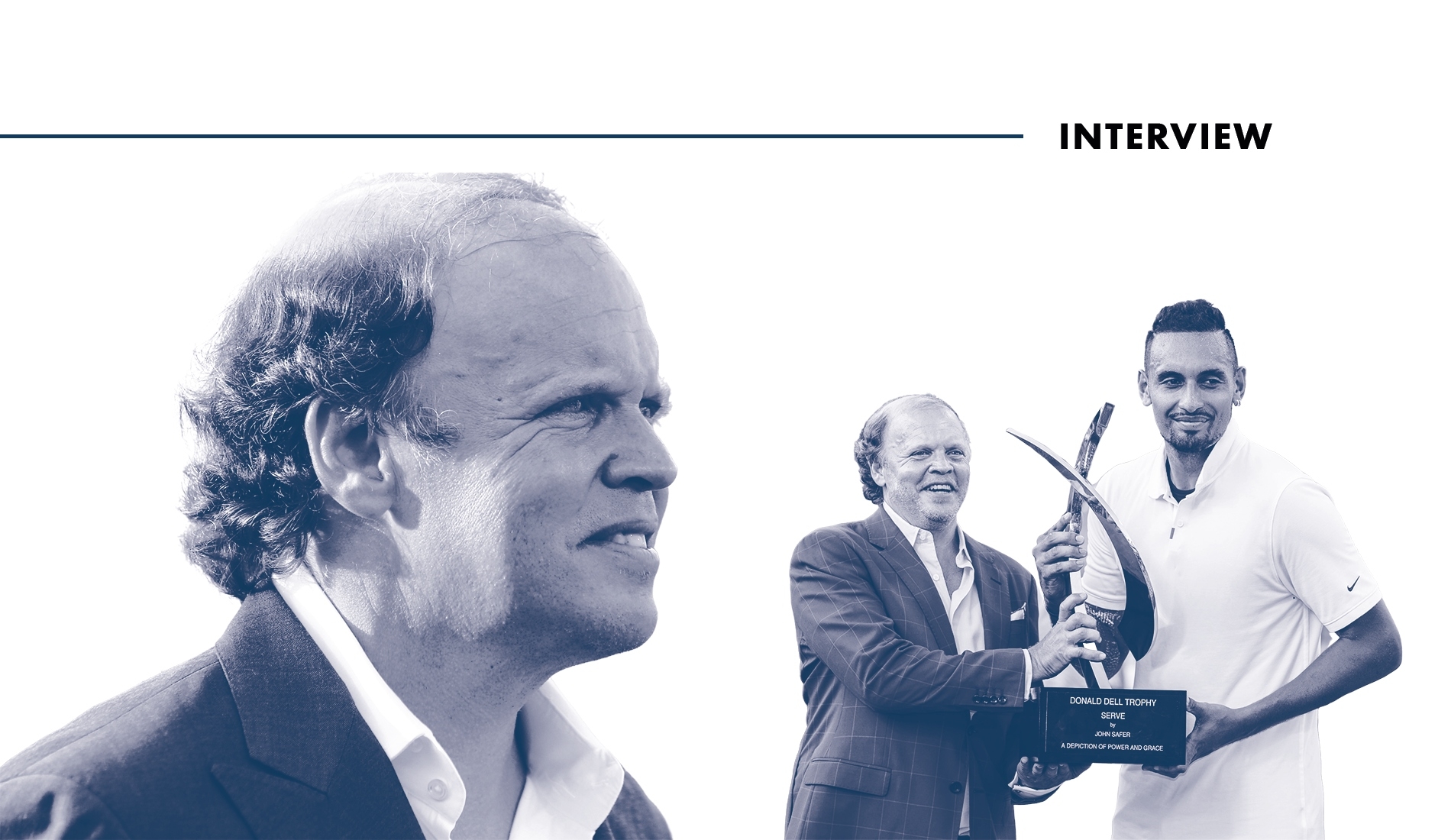 Ein, who also owns the Washington Kastles World Team Tennis team, bought the management rights in 2019 and will have an option to buy the tournament outright in 2024. Deeply invested in the success of the sport in the city, he and his team have been working hard to prepare for the ATP Tour’s return and will be the first event on the revised calendar, albeit with no fans and almost certainly no media on site.

In an exclusive interview, Ein talked to Simon Cambers about his hopes for the event and the detailed protocols that he and his team will try to deliver to allow the event to be a success.

Do you feel a special responsibility, as the first tournament back?

Very much so. We view that as a huge honour and a huge responsibility; we think of it in both ways. We fully recognise the unique place that this tournament has. In my office, I have a sign behind me for Zoom calls, which says ‘Tennis Resumes in Washington’.

That must bring a lot of pressure, too?

It won’t happen because we’re really cautious and disciplined, but if any event happens and they’re not cautious and careful and there’s an outbreak it really risks everything for the sport. It’s not just your event but you could risk everything downstream. So that’s part of the huge responsibility. Obviously you don’t want anyone to get sick and you’re going to do everything in your power to (make sure of that), but you also have to be realistic, that people are getting sick all the time in their everyday life, you’ve just got to make sure that if it does happen, it’s a one-off.

The US has very high numbers in terms of Covid-19 cases. Are you worried are you that the Citi Open could still be cancelled?

Yes. I am. We have different milestones, where we have to do commitments…where you have to kind of constantly assess where we are, because the worst disaster would actually be to cancel the week before, when players are here, made travel plans. We’ve spent a ton of money, that would be bad for everyone, too. So we’re constantly doing recalibrations just to make sure that it makes sense. Frankly, I think the only thing that is a meaningful possibility is just the travel issues; can people get in and out of the country. I see the trajectory of the virus in our community is really good. Our plan is really good.

Frances Tiafoe (who contracted Covid-19 during an exhibition event in Georgia) – I’ve known him since he was five and I felt horrible for him (but) the silver lining in that, if there is a silver lining, is that no one else got it down there. As opposed to the Adria Tour, where everyone got it. So you could actually view that as a net positive because you can prove one person can get it and it doesn’t infect the entire group. So I don’t think the virus in our community will stop this; I think the big thing is just the travel issues, can people come and go.”

You’re planning on having no fans, but the logistics must still be mind-boggling?

We have no fans, at the moment. We obviously don’t have the size, scope, resources of the US Open but our operations manual is as big and detailed as theirs, we have a 38-page very detailed manual about every little thing. It’s charts and maps, everything that it will take, none of which existed before this year. It’s literally thinking about every step of the experience to just make sure we’re keeping people as safe as possible, and again, if anything would happen, it would be contained. We have partners in Medstar, a large healthcare system in DC that’s really expert at this stuff, they have a lot of experience with other sports during Covid. We’re leveraging heavily the USTA’s medical experts, the ATP’s medical experts, the city’s medical experts.

One of the things about DC is they’ve actually been extraordinarily conservative and cautious through this. It consistently has the lowest or second-lowest spread of virus throughout America. The R-efficient, how much it’s spreading, and literally every day, DC is lowest or second-lowest. That’s just being conservative. That’s just the lesson for me in all of this, whether you look at states in America or countries across the world, the ones who were most cautious and conservative are the ones who are in the best shape and the ones who weren’t, aren’t. That’s the mindset we have to have too.

We had the whole period of (Black Lives Matter) protests in Washington, where people were on the street. And I would say….even during that, if you look at the protestors, a huge number of them were trying to be careful and being distant, or as much as you could in a setting like that, and that did not lead to any surge in cases, which is interesting.

Can you run me through the testing protocols for the event?

When people get here, they’ll be tested right away. They’ll be asked to stay in the hotel until we get the result back. They can’t go anywhere. Everyone who’s in the bubble will get tested, so umpires, ball-kids – but ball-kids are actually now going to be over 21 years old – and they may stay in the hotel. We’re going to try to be really strict around the bubble, everyone has to get tested. Then daily there’s a questionnaire and a temperature check. And we’ll probably now add extra tests during the week. We’re going to have an entire hotel to ourselves, which is fantastic. It’s a hotel that has a lot of space, so we’ll be able to do testing there, so players don’t have to do it all on site. Then there will also be some daily testing on site, but we’re going to move a lot of it to the hotel, just because I think it will make it a lot easier for people.

And what about the protocols on the court – will ball boys hand towels to players?

No handing towels, (they will be wearing gloves). We have to decide on the balls. I don’t know if we’re going to use those tubes in Charleston, where they didn’t touch the balls. We’re trying to figure that part out.

You were also looking at hosting a WTA Tour event but in the end it went to Kentucky. What happened?

We were committed to doing it – it’s important to me to showcase women’s tennis and we wanted to find a way to give women jobs – if we were the only option it didn’t seem right to not – and then I guess, the WTA and Octagon had been working on this other option and they made the decision to do that. I understand it and it may end up being a good idea, just having fewer people on a site is going to make it easier. The US Open are using the entire grounds for players – we don’t really have that kind of room. We would have made it work, it would have been fine and we were actually going to move the dates so it would have been less of a direct overlap, but putting them in separate places is probably sensible.

How does the player field look?

Amazing. The sign-ups are amazing. We still have another week or two to go but it’s really strong. Right now everyone can get here, it’s just quarantine issues and getting back. One of the real virtues of where we are is there are three international airports in Washington, and then you can just drive to New York, or take a train – it’s just a three-and-a-half-hour drive. For players coming from the States or overseas, coming to Washington is kind of as easy as getting to New York and then getting to New York is easy. I think what people are thinking is that if you’re going to play the two New York events, it seems hard to imagine that it wouldn’t make sense after six months off to come here and do this. So I haven’t heard of anyone who’s committed to New York who is saying I’m not coming to DC. I think Daniil (Medvedev) committed and Andy (Murray) said some nice things too.