Zverev comes back to beat Berrettini for Madrid title 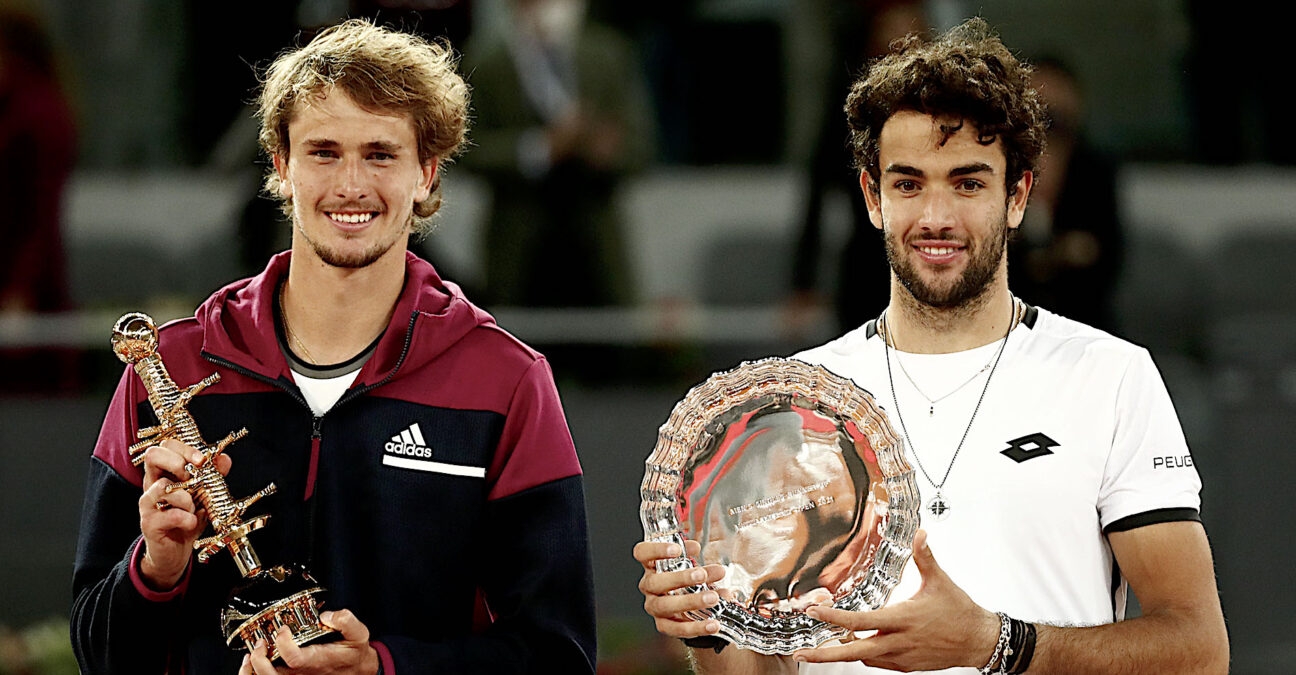 Germany’s Alexander Zverev completed the perfect week as he came from behind to beat Italian Matteo Berrettini 6-7 (8), 6-4, 6-3 to win the Mutua Madrid Open at the Caja Magica on Sunday.

In his first Masters 1000 final – and on his Madrid debut – Berrettini looked in command after he won the first set but three years after his first Madrid title, world No 6 Zverev stormed back to collect his 15th career title after well two hours, 40 minutes of massive hitting from both men.

“It’s great, especially as I lost my last two Masters 1000 finals,” Zverev said. “I just want to enjoy this one.

“I didn’t play someone this week who can serve (like Berrettini) so it was definitely a different match. I’m extremely happy right now. I feel awesome.”

MASTER OF MADRID 🏆@AlexZverev is the @MutuaMadridOpen champion for the second time! pic.twitter.com/gu1gKGPvKa

Zverev said his victory was the perfect springboard for the rest of the clay-court season, starting this week with the Internazionali BNL d’Italia in Rome and then Roland-Garros.

“It’s extremely important,” he said. “I think the clay court season, also to do well at the French Open, you need to be playing well during the clay court season. That is in a way important for me, as well. At the end of the day I won a Masters. There’s really very little in terms of bigger than this one right here. I’m happy. I’m happy with this achievement. Obviously, yeah, I look forward to the next few weeks. I look forward to what’s ahead.”

In his first Masters 1000 final, the Italian showed no signs of nerves, banging down huge first serves and crunching even bigger forehands to put Zverev on the back foot.

Zverev had beaten Rafael Nadal in the quarter-finals and then Dominic Thiem in the semi-finals to reach the Madrid Open final for the second time, three years after he won the title. Berrettini broke first to lead 4-3 but Zverev broke straight back to level and the set headed for a tiebreak.

Berrettini raced into a 5-0 lead only to falter, slightly, as Zverev hit back to 5-4. At 6-4, Berrettini had two set points but could not take them; then at 7-6, Zverev had a set point on the Berrettini serve but the Italian smacked a forehand winner to save it. Zverev saved a third set point at 7-8 but on the next point, a rush of blood to the head saw him try a 226kmph second serve and he double-faulted, allowing Berrettini to serve it out 10-8.

Will that shot be the game changer of this match? #MMOPEN pic.twitter.com/dHyF0tCUgL

If anything, Berrettini served even better at the start of the second set, not dropping a single point in his first three games as the pair stayed toe to toe at 3-3. In the seventh game, Zverev had a break point chance at 30-40 but Berrettini mixed his game up brilliantly, serving and volleying to save the break point and then playing the most deft of drop shots to edge ahead again.

But Zverev, who had been so brilliant against Nadal and Thiem, continued to play his part, serving superbly throughout. The German forced two break points in the following game as he chased down a poor drop shot and took his chance when Berrettini double-faulted, before serving out to level the match.

One set will decide it all in Madrid ☝️

A lapse in concentration from Berrettini gave Zverev 0-30 at 1-1 but the Italian then produced four superb points, showcasing his all-court skills to hold serve and move ahead again.

It was then Zverev’s turn to dig deep, saving a break point at 1-2 and having got himself out of trouble, he pounced, breaking Berrettini to lead 3-2 when the Italian’s brilliant forehand wavered for once. Zverev held firm on his own service games and though Berrettini saved one match point with a big forehand, he sent a backhand wide on the second to secure the title for the German.

“I’d like to congratulate Sascha, another unbelievable week,” Berrettini said. “I think we played a great fight. It’s tough. This sport is crazy, because it’s actually a really good moment of my career but at the same time it’s not that great because I lost.”

And Berrettini said he would learn from his defeat.

“Now that I’m here, I’m upset I lost,” he said. “It’s important for my tennis, for my level. We spoke with my team. We figured it out, I mean, Sascha won not easy but like in two sets against Thiem and Rafa, and today was struggling against me. This is definitely a good feeling and something that I have to use to build in my future tournaments, next tournaments. It hurts now, but I know this loss is going to be useful.”