How Coco Gauff Prepared at Home To Conquer the World

Off the court too, Coco Gauff displays a sense of space and time far beyond her years. 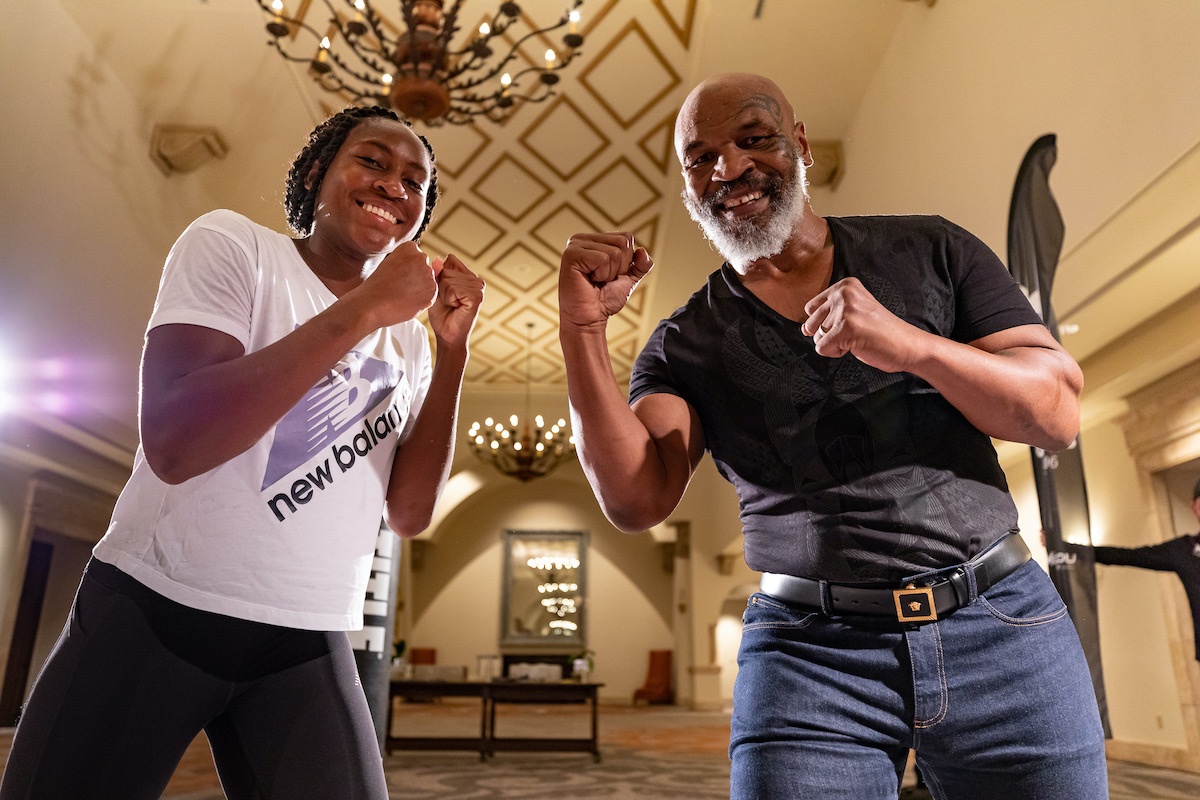 Invited to speak at the ‘Mouratoglou Preseason’ opening dinner as the youngest member of the cast, the 15-year-old Coco Gauff stood up, grabbed the mic and improvised a speech worthy of the Grand Slam champion she dreams of becoming one day.

She thanked Patrick Mouratoglou for the “opportunity to be part of this amazing camp”; dropped a note to their host, Boca Resort & Club Director John C. Tolbert; turned to DJ Bob Sinclar, who had earlier expressed his admiration for her, to remind him they had briefly met three years before at the Mouratoglou Academy inauguration evening, but that he “probably didn’t know who [she] was back then”; she then looked straight to one of the documentary crew cameras following the group and acknowledged everyone who made her 2019 memorable.

Most of her entourage was in attendance, though.

Renewing with the tradition of organising a team-building camp prior to the Australian Open, six years after the last one took place in Mauritius, Patrick Mouratoglou had set his sights on Boca Raton, Florida, a rather quiet city located just a short 45-minute drive from Gauff’s home of Delray Beach. 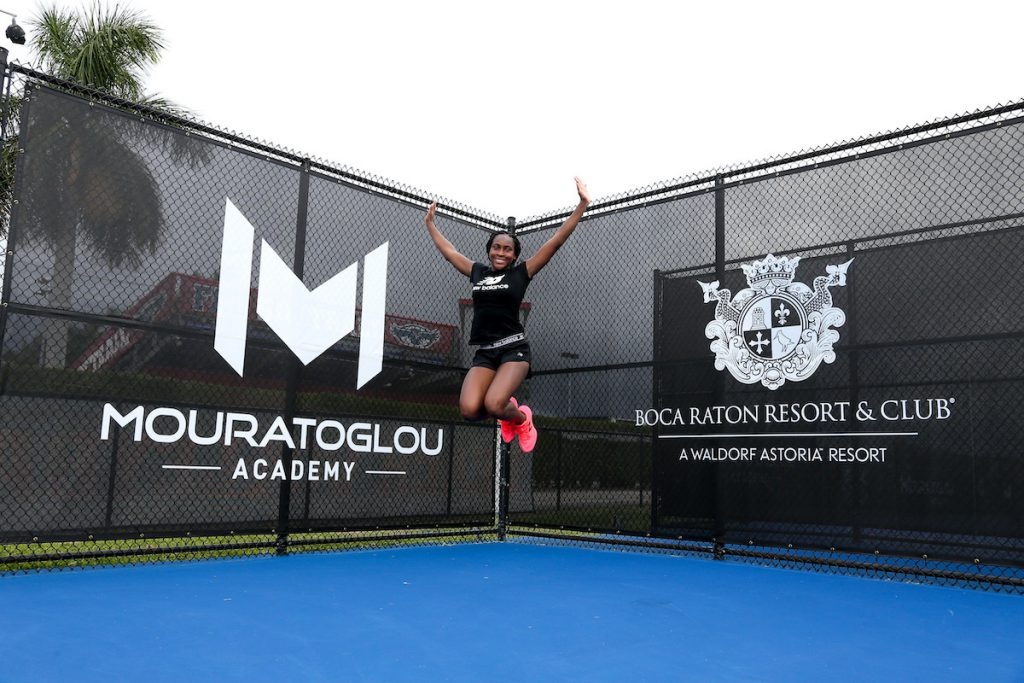 Back when she was 9, her parents, both former standout college athletes, decided to relocate from Atlanta to Florida in the hopes of emulating the Williams’ rags-to-riches story.

Coco Gauff’s father, Corey, came up with a ten-year plan to propel her daughter into the WTA top 100. Six years inside it, she already stands at No. 68, having risen all the way from No. 870 in the span of just one year… just like she had planned.

“Right now, I’m just playing some ITFs to get my ranking up and to see if I can get wild cards into certain tournaments. I think next year, that’s my goal, to be top 100 in WTA,” Gauff said in December 2018 after winning the Orange Bowl — the world’s most prestigious 18s tournament after the junior Grand Slams — at age 14.

Unfazed by the dizzying magnitude of the task ahead, Coco Gauff broke through at Wimbledon, becoming — as a qualifier — the youngest woman to reach the second week at SW19 since 1991. In the first round, she had taken out her idol Venus Williams in straight sets (6-4, 6-4) for her maiden Grand Slam main draw win. Hollywood couldn’t have scripted it any better, really.

She then clinched her first WTA doubles title alongside good friend Caty McNally in Washington, in July, and in October, as a lucky loser, she stunned the Linz field to claim her first singles title, cracking into the top 100 in the process.

In between those two events, she had moved the whole of America, and the world, by breaking into tears after world No. 1 Naomi Osaka had proven too much for her in the US Open third round (6-3, 6-0). The Japanese, who knew how sorrow in New York tasted like since the previous edition, insisted Gauff took the stage and shared the post-match interview with her.

“You guys raised an amazing player,” Osaka said of her young opponent, whose tears kept on flowing but who eventually pieced her heart back together and delivered a heartfelt, mature-way-beyond-her-years speech to an ever-overwhelming Arthur Ashe crowd.

Besides her parents, much of Gauff’s early success on the professional tour can be attributed to Jean-Christophe Faurel, the former coach of Adrian Mannarino, who started working with Gauff after her first tour-level win at the Miami Open, last March.

“It feels a little weird to put it like this, but right now, she is all my life,” Faurel told us during one of the team’s daily commutes to the nearby FAU tennis courts. “I wake up early in the morning to prepare my training sessions with her and when I get back home in the evening, I go straight to bed because I’m too tired to stay up. I sacrificed a lot of things for her — but I know she’s probably the biggest ‘project’ of my life,” added the 38-year-old Frenchman, who peaked to No. 140 in 2006″. “The world watches on. Giving my absolute best is a form of respect for her potential and for what her parents do for her.” 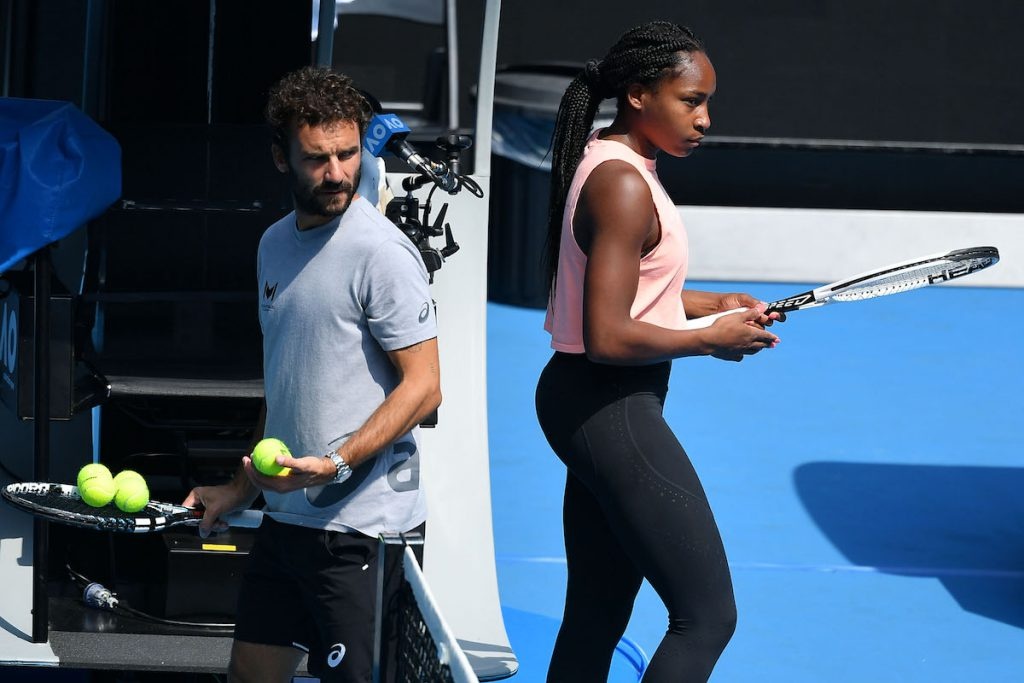 Practices are an important consideration in Gauff’s team, at least as long as she’s still under the WTA age eligibility rule. Between her 15th and 16th birthday, she couldn’t play more than 14 professional tournaments and between her 16th birthday (next March 14) and her 17th, she will not be able to compete in more than 16. However eagerly she might anticipate competition, which she craves, Gauff is forced to spend more time than her peers at practice for now.

For this preseason, Faurel brought a new addition to the team: 29-year-old Axel Michon of France, a fellow former top 150 player who retired at the end of last year. Like her idol Serena Williams, Coco Gauff prefers to train with male hitting partners to get adjusted to harder power and pace.

Workout with Tyson, dance with Serena, karaoke with Azarenka…

While Gauff had met Williams before and had already been repeatedly associated with her in the collective imagination, the pair had perhaps their most viral stunt together yet when they posed along with Bob Sinclar after participating in an exclusive ‘Insanity’ session by fitness guru Shaun T. 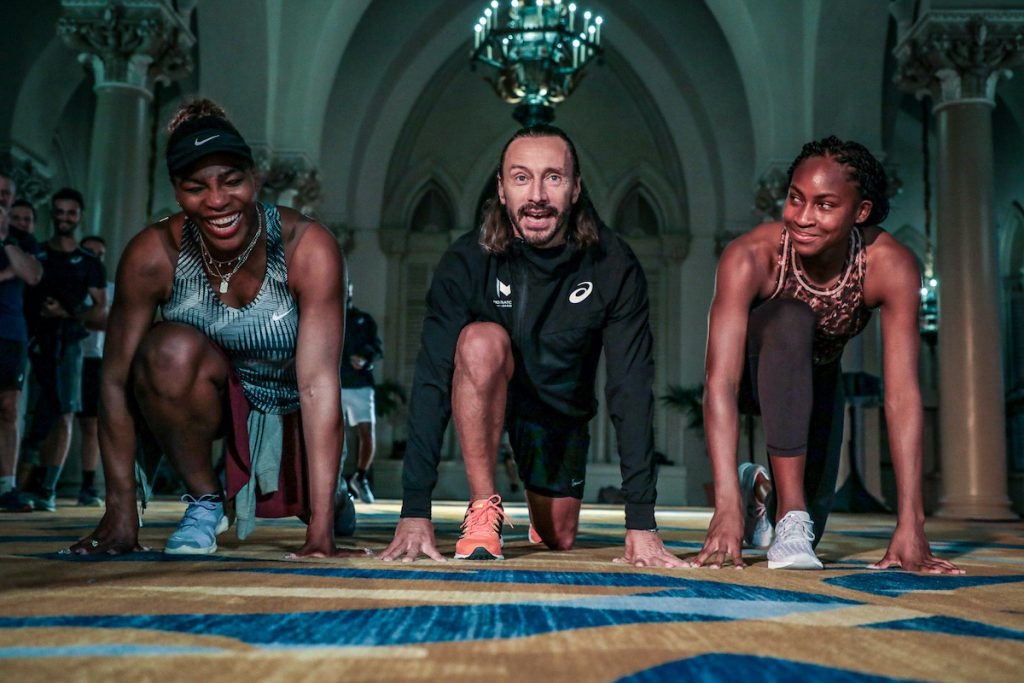 Only a couple days later, under the watchful eyes of her father and Patrick Mouratoglou, Coco Gauff took on another heavyweight, in the literal sense of the word: former boxing champion ‘Iron’ Mike Tyson.

After their one-hour workout, Gauff aroused praise from Tyson.

“You’ve got the light. We don’t understand we have the light when we have it. Keep doing your thing. You look awesome,” he concluded before a seemingly emotional Gauff. 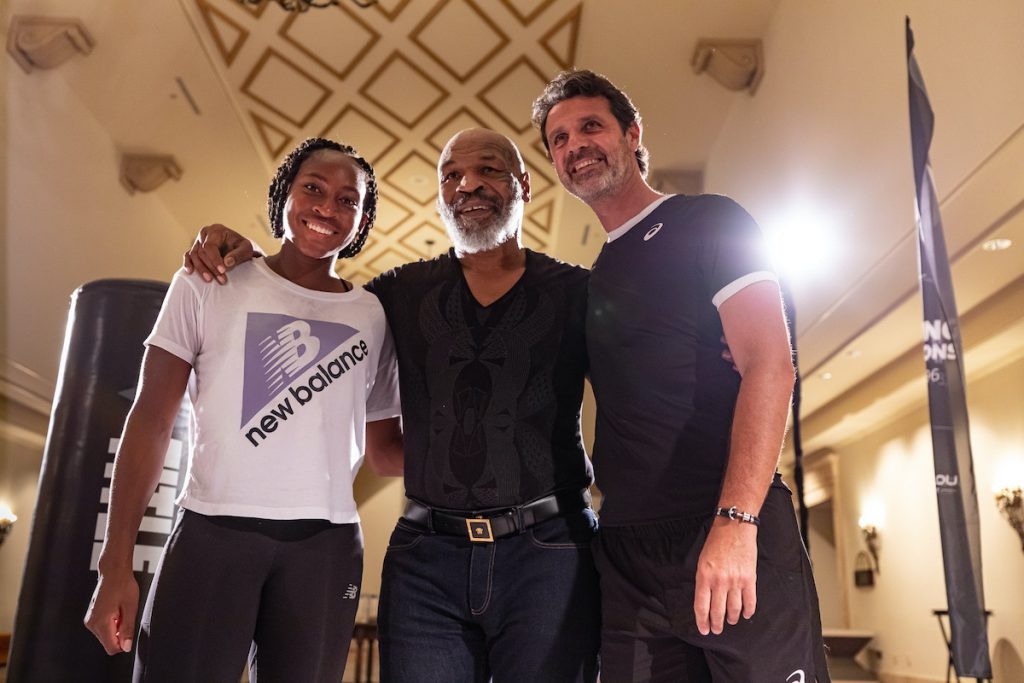 This preseason, Coco Gauff enjoyed the opportunity to share bonding moments with young players who have the same outlook on life, early success and ‘light’ as she does.

“We talk regularly during the year”, junior world No. 1 Holger Rune, 16, confided about his friendship with Gauff. The Dane and the American, who met through the Mouratoglou Academy and both won their junior Grand Slam title at Roland-Garros, speak the same ‘language’ of competition. 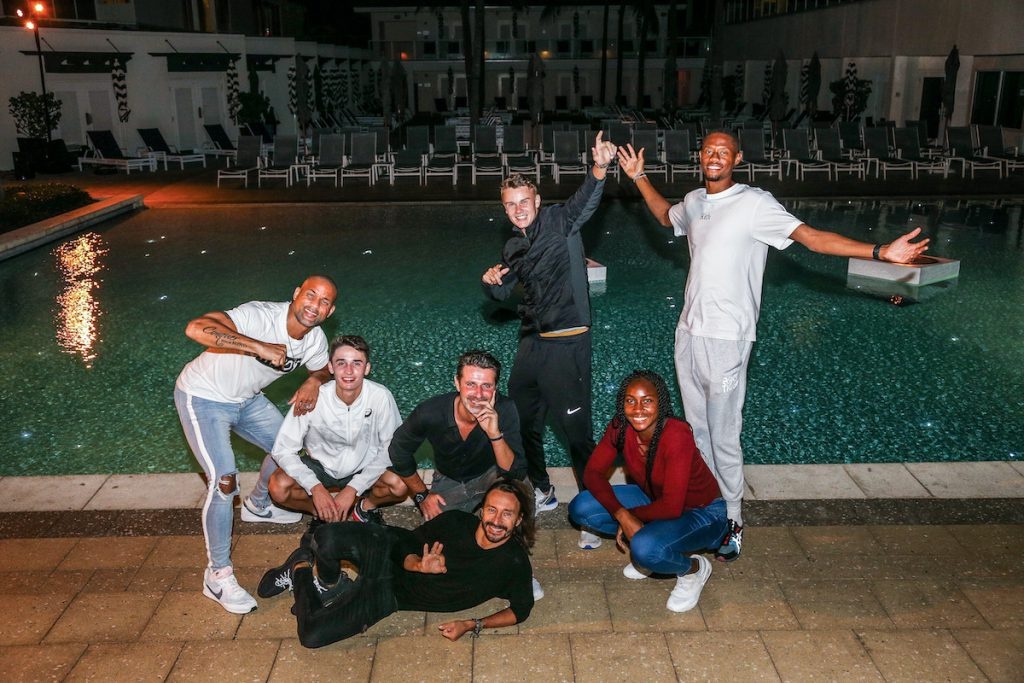 One day, as they couldn’t agree on who of the two had been the faster runner at the Bike & Run activity, the Mouratoglou Academy settled the debate by putting up a poll on their Instagram Story, which Gauff won by a close margin of 55% to 45, or 1162 votes to 951.

As a grand finale for the preseason camp, she, Serena Williams and Christopher Eubanks — her good friend and 2018 US Open mixed doubles partner — collided to perform a choreography led by Shaun T and mixed by Bob Sinclar.

She then spent Christmas with her family in the “the most magical place on Earth,” Orlando’s Walt Disney World Resort, where she maybe premiered her interpretation of ‘Let It Go’ — a song she had rehearsed with former world No. 1 Victoria Azarenka on karaoke night. 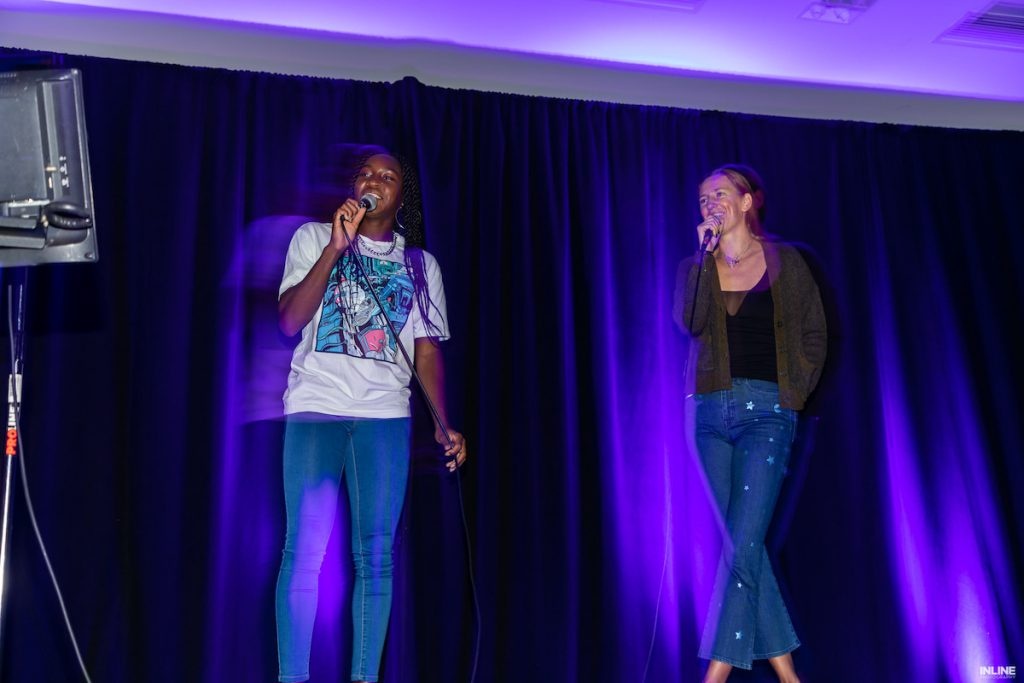