Each day, Tennis Majors takes you back to an important moment in tennis history. On this day, June 23, in 2003, Ivo Karlovic upset defending champion Lleyton Hewitt in the Wimbledon first round. 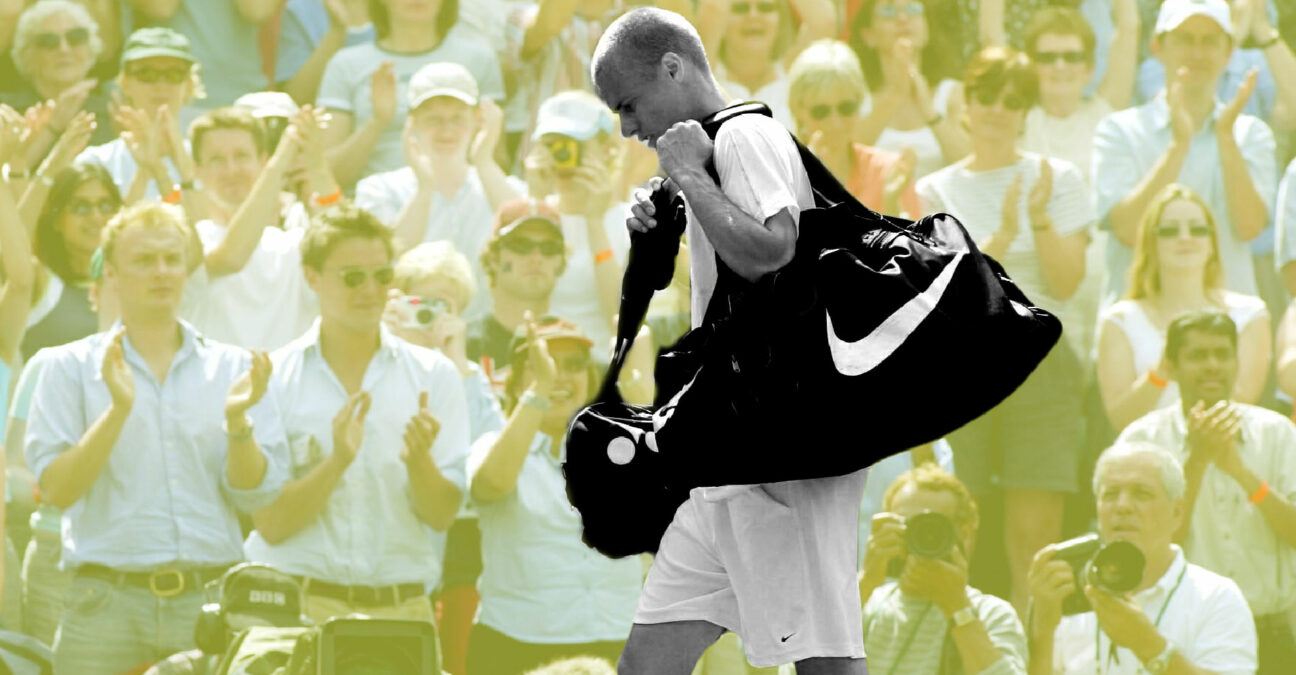 On this day, June 23, 2003, Lleyton Hewitt became the first Wimbledon defending champion in the Open era to be defeated in the first round. The Australian, who was the tournament’s first seed despite being ranked world No 2, lost to the Croatian giant Ivo Karlovic 1-6, 7-6, 6-3, 6-4. Karlovic was a complete unknown at the time, coming in at only 203rd in the ATP rankings. Hewitt’s early loss opened the draw, and  21-year-old Roger Federer took advantage by winning the first of his 20 Grand Slam titles.

Lleyton Hewitt, the son of a professional Australian football player, was born in 1981. He was a great mover, very skilled at returning serves and, above all, he was an incredible fighter — his trademark “come on!” was famous in the world of tennis. In January 1997, aged only 15 years and 11 months and without an ATP ranking, he was invited to Australian Open qualifying — where he won three matches to become the youngest qualifier of the tournament’s history (defeated in the first round of the main draw by Sergi Bruguera, 6-3, 6-4, 6-3). A year later, in 1998, the young Aussie amazed the world of tennis by clinching his first title ATP title before his 17th birthday in his hometown of Adelaïde. On his way, he defeated the great Andre Agassi 7-6, 7-6 and, in the final he beat Jason Stoltenberg 3-6, 6-3, 7-6. In 2000, he became the first teenager since Pete Sampras to claim four titles in one year. The most important of these four titles was the Queen’s Club Championships, where he beat the six-time Wimbledon champion Pete Sampras in the final (6-4, 6-4). It was also in 2000 that he obtained his first notable Grand Slam result, reaching the semi-finals at the US Open, where Sampras took his revenge from the Queen’s Club loss (7-6, 6-4, 7-6). “Rusty,” as his coach Darren Cahill called him, was now a top 10 member, and in 2001 he changed categories by triumphing at the US Open — defeating Sampras in the final 7-6, 6-1, 6-1. A few weeks later, he became the youngest world No 1 of all-time after claiming the Masters Cup title, and he held that spot for a total of 80 weeks. That stretch included the entire 2002 season, when he triumphed at Wimbledon (beating David Nalbandian in the final, 6-2, 6-3, 6-2) and at the Masters Cup (defeating Juan Carlos Ferrero 7-5, 7-5, 2-6, 2-6, 6-4). In 2003 he had trouble keeping his hold on the tour, and, despite his title at the Indian Wells Masters 1000 he faced several disappointments — such as losing to Sébastien Grosjean at the Queen’s Club (6-3, 6-4), a loss that caused him to lose the world No 1 seat to veteran Andre Agassi.

Ivo Karlovic, the tallest player on the Tour (6’11”), was 24 years old in June 2003, and he had never before appeared in a Grand Slam main draw. A few months earlier in the spring, Karlovic was still attending Futures tournaments — losing to players ranked outside the top 300. However, just before Wimbledon he won his first match of the year on the main tour by defeating Justin Gimelstob at Queen’s Club 7-6, 4-6, 7-6.

Wimbledon is the oldest and the most prestigious tennis tournament in the world. Held at the All England Lawn Tennis & Croquet Club since 1877, it moved to its current location in 1922, the same year when the Centre Court was built. Considered by many as the most intimidating court in the world, with its famous Rudyard Kipling quote above the entrance (“If you can meet with triumph and disaster and treat those two impostors just the same”), Centre Court had seen the best players of all time competing for the title. After the US Open switched to clay and then hard court in the 1970s, and after the Australian Open switched to hard court in 1988, Wimbledon remained the only Grand Slam tournament to be played on grass — a surface that is usually more suitable for serve and volley players. Not only did Wimbledon keep its surface, but it also maintained old-fashioned traditions such as the white dress code and the fact that the defending champion was always the first to play on the Centre Court.

In June 2003, when Wimbledon began, it was hard to call Lleyton Hewitt the favorite. The defending champion had faced several disappointments in the first half of the season, and, having just lost the world No 1 spot, he was certainly not at the peak of his confidence. However, when he entered the Center Court to play the opening match against an unknown qualifier, world No 203, Ivo Karlovic, no one thought that the first seed could exit the tournament in the first round.

In the first set, the 6’11” Croatian, who at 24 was playing competing in a Grand Slam main draw for the first time, was overwhelmed by the pressure of facing the first seed on such a legendary court. Hewitt stormed through the first set 6-1. However, the Australian missed five break points at the start of the second set, and the momentum changed.

“The first set, I was completely scared,” Karlovic said after the match, according to atptour.com. “After I saw that I can beat him, I started to play better.”

‘When I missed those opportunities early in the second set, his whole game sort of came together,” Hewitt assessed. “He didn’t make as many easy mistakes.”

Karlovic won the second set 7-6, sharpening his serve, while the defending champion was but a shadow of his usual self. Hewitt, who had built his career on his great return skills, was obviously disturbed by the angles reached by the Croatian giant. Strangely, the Australian repetitively tried to lob over Karlovic despite his opponent’s height, unsurprisingly without much success. After two hours and 24 minutes of play, and after having served 18 aces, the world No 203 defeated the top seed in four sets.

However, Karlovic now had to face another challenge: the post-match press conference. The Croatian, who had a stutter which could be exacerbated by stress. “I have a speech difficulty but I try to work to be better,” he said.

Hewitt was the first Wimbledon defending champion to be ousted in the first round in the Open era, and only the second in the entire tournament’s history (the first one being Manolo Santana, defeated by Charlie Pasarell in 1967).

“I felt like I was hitting the ball pretty well out there on the court today,” the world No 2 sad, according to The Guardian. “I didn’t take my chances…but there wasn’t too much I could do on the break points that I had. It will be disappointing for a while. Every loss is different. I’m sure this one is not going to go away by the end of the week.”

In 2007, the Croatian giant would achieve a rare feat, winning three tournaments on three different surfaces: the first one on American clay in Houston (defeating Mariano Zabaleta in the final 6-4, 6-1), the second one on grass, in Nottingham (beating Arnaud Clément 3-6, 6-4, 6-4), and the third one on hard courts, in Stockholm (defeating Thomas Johansson 6-3, 3-6, 6-1). He would climb as high as world No 14, in 2008, but he would never reach the quarter-finals of a Grand Slam tournament.