May 2, 2007 : The day that Federer and Nadal played the Battle of Surfaces

Every day, Tennis Majors takes you back in time to relive a tennis event which happened on this specific day. On May 2, 2007, Roger Federer and Rafael Nadal, the two best players in the world, played a unique exhibition match in Mallorca, called the Battle of Surfaces 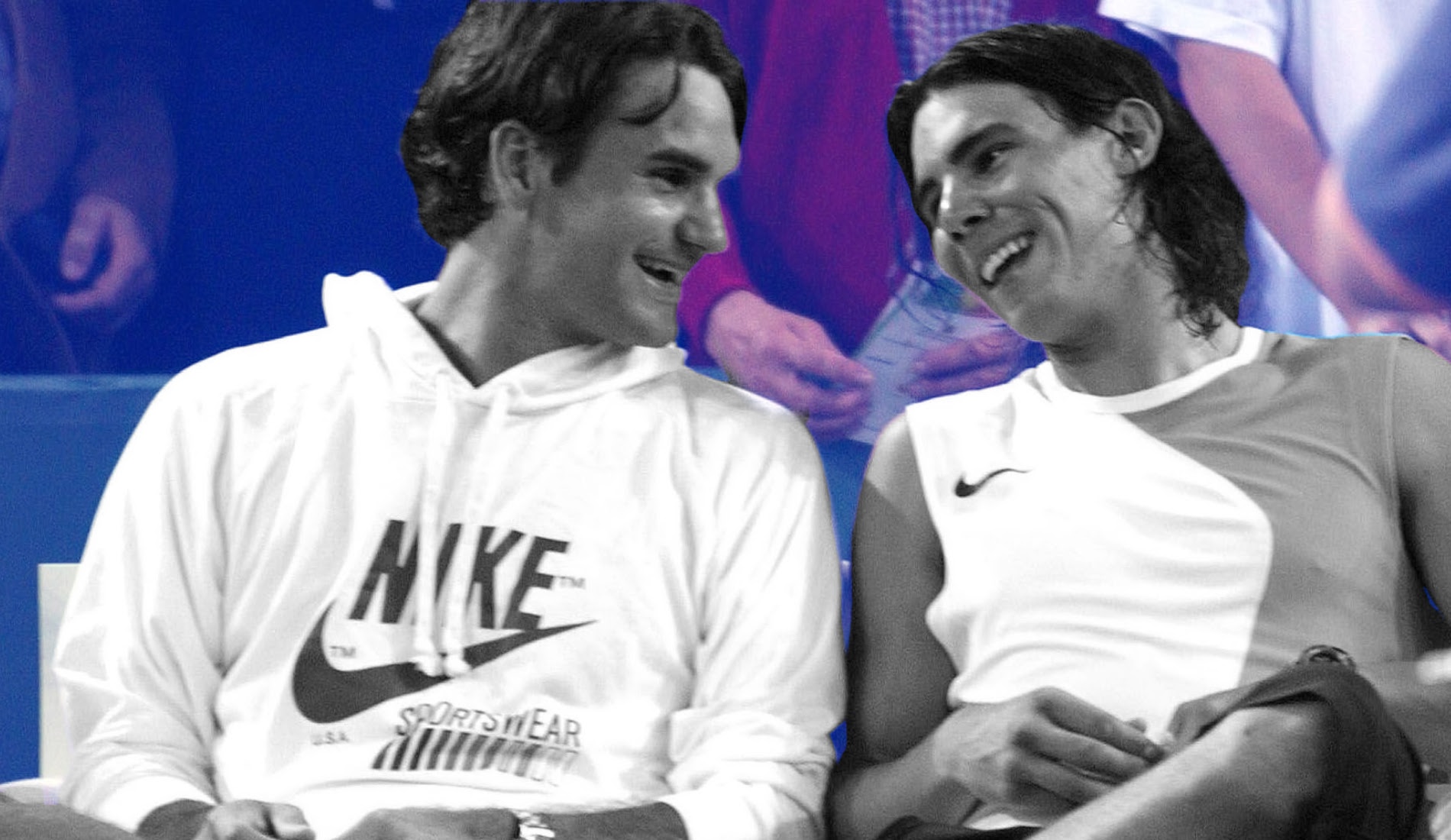 On May 2, 2007, Roger Federer and Rafael Nadal, the two best players in the world,  played a unique exhibition match in Mallorca, called the Battle of Surfaces. The court they played on was indeed split over two surfaces, one side of the net being clay while the other side was grass, as a reference to their rivalry in which the Spaniard prevailed on clay while the Swiss dominated on grass. Nadal eventually won 7-5, 4- 6, 7-6 (12-10).

Rafael Nadal : the 21 year old Mallorcan was No 2 in the world since July 2005, shortly after his first title at Roland-Garros at the age of 19.  Until this day, he had not lost a single match on clay since April 8, 2005, when he lost in Valencia against Russian Igor Andreev (7-5, 6-2). He was on  an ongoing 72-match winning streak, which allowed him to claim 12 titles on this surface, including two at Roland-Garros (2005, 2006). He became Federer’s nightmare, stopping him twice at Roland-Garros (2005, 2006), and beating him up to four times in 2006, a year when only two players managed to beat the Swiss – the other being Frenchman Jo-Wilfried Tsonga. Nadal was not to be challenged on clay, but he was also improving on other surfaces. He had managed to win two Masters Series tournaments on hard court in 2005 (Toronto and Madrid), but he also started to perform where no one expected him to, due to his game style – on grass. In fact, he reached the final in Wimbledon in 2006, where Federer took his revenge from the Roland-Garros final (6-0, 7-6, 6-7, 6-3). In 2007, he reached the quarter-finals at the Australian Open, beaten by Fernando Gonzalez, before lifting trophies in Indian Wells, Monte-Carlo and Barcelona.

The Battle of Surfaces tennis presentation was held on May 2, 2007. The match was played in the capital city of Nadal’s home island, Palma de Mallorca. The half-clay and half-grass court, which was created specifically at the Palma Arena for this show and would never be used again, took 19 days and cost approximately $1.6 million to build. 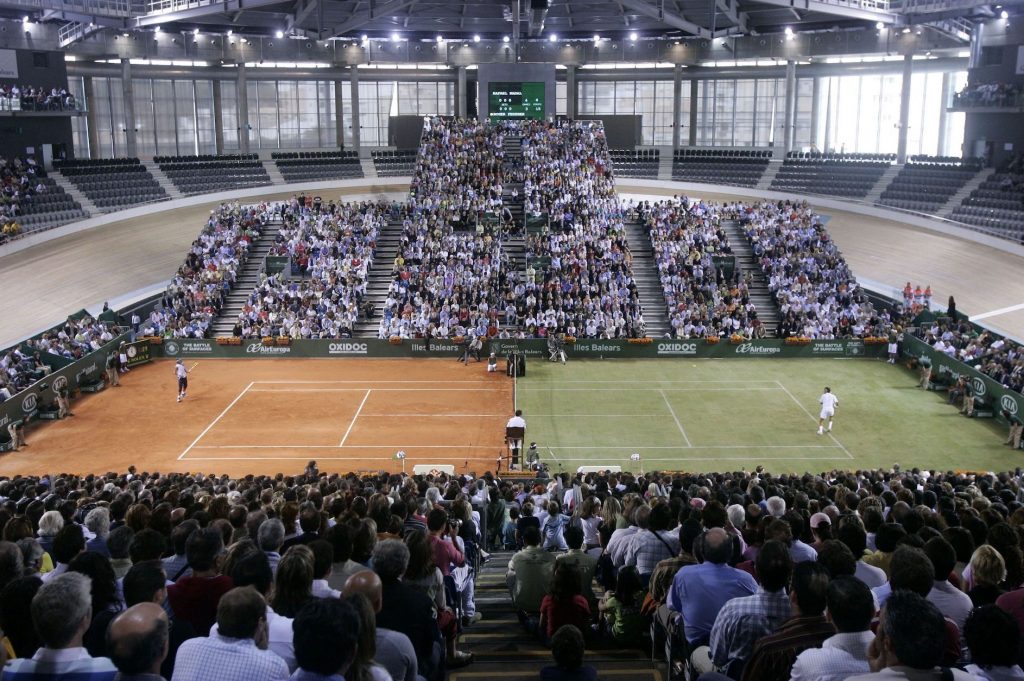 The match goes to three sets

This exhibition match was meant to determine which one of the players would prevail on a mixed surface that would even the chances : Roger, the grass-court wizard (48 wins in a row), or Rafa, the master of clay (72 matches undefeated)?

Quoted by Eurosport.com, the Basel-born champion had said prior to the event :

“It’ll be fun to find out what it’s like to play on a court with mixed surfaces. And it ought to be interesting to see who chooses the better tactic. The result is not the most important thing, it’s about having fun.”

The stands were packed with 6,800 lucky spectators, and, according to the promoters, almost 200 million tennis fans were in front of their screen when Federer and Nadal – world No 1 and world No 2 – walked onto Palma Arena that day. There was a lot excitement to see the best grass-court player in the world competing with the best clay-court player on this never-seen-before split court. The show almost did not happen though as, according to the BBC, the organisers had to lay a brand new surface on the grass side of the court the night before the match, after the original turf had been damaged by worms.

Changeovers were extended to two minutes instead of the usual 90 seconds to give players a chance to change their footwear for each surface.

Did the unique mixed court actually even the chances? It was clearly giving an advantage to the player standing on the red side : he had more time to adjust, especially while returning, as the balls would bounce higher, while it was hard to defend on the green side.

Maybe it did help Rafael Nadal, as the Spaniard won the contest in front of his home crowd, after two and a half hours of a tough fight, 7-5, 4-6, 7-6.

The show was appreciated by the general public, although it was clear that the two champions played in a slightly more relaxed way than on the real tour. Nadal, quoted by the BBC, confirmed that :

“It has been a nice experience, although before the match I thought it would be a disaster because I felt it would be very difficult for me to adapt to the court. I have had a good time and that is important. Both of us would like to repeat this experience because, although the match was not a real one, it allowed us to play for points without much tension and to play more relaxed.”

Federer said: “I found the court to be excellent, especially the clay part. The challenge was difficult, because you have many things in your head.”

Although both players seemed to have enjoyed the experience and said they were looking forward to doing it again, the 2007 Battle of Surfaces would remain the only match ever played on such an extraordinary court.

Federer would win Roland Garros once, in 2009, defeating Robin Soderling (the first man to beat Nadal at the tournament), 6-1, 7-6. 6-4 – without ever edging Nadal in his favorite tournament.

Roger Federer and Rafael Nadal have faced each other 40 times till date, with the Spaniard leading 24-16. On clay, Nadal would claim a 14-2 record against the Swiss, whereas Federer would lead 3-1 on grass. Their rivalry would be considered the greatest in men’s tennis history, to the point where it became associated with the very image of the sport.