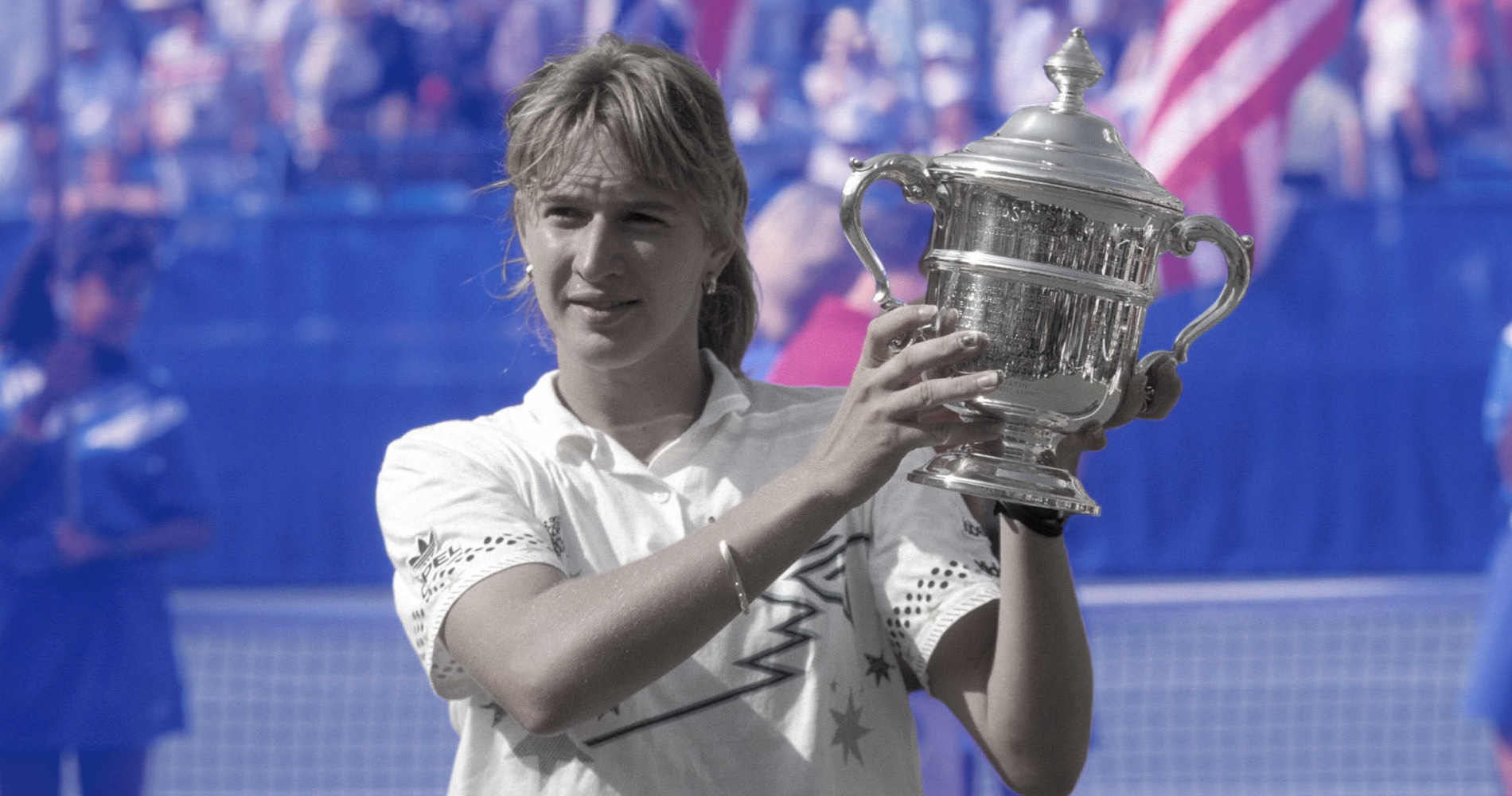 On this day, September 10, 1988, Steffi Graf beat Gabriela Sabatini in the US Open final (6-3, 3-6, 6-1) and became the third woman to achieve a calendar Grand Slam, 18 years after Margaret Court (1970) and 35 years after Maureen Connolly (1953). Across the four major tournaments that she won that year, the German only dropped two sets in 28 matches. A few weeks later, in Seoul, Graf would put a cherry on top of that fantastic season, clinching the Olympic gold medal, thus achieving a unique “Golden Slam”.

Stefanie Graf was born in 1969. In 1982, at the age of 13, she became the youngest girl to ever get a WTA ranking. After winning the exhibition event held at the Los Angeles Olympics in 1984, she constantly improved her game and her results. She reached the semi-final at the 1985 US Open at the age of 16, defeated by world No 1 Martina Navratilova (6-2, 6-3). In 1986, she claimed her first title in Hilton Head, before getting to the US Open semi-final a second time.

Closely monitored by her father, she had her breakthrough year in 1987, when she lifted her first Grand Slam trophy, edging Navratilova in the final of Roland-Garros, and finishing runner-up to Navratilova in Wimbledon and the US Open. On August 17, she even took the top WTA ranking from the American, who had held it with little interruption since 1982.

Graf started 1988 by claiming the title at the Australian Open, against Chris Evert (6-1, 7-6), and in June, she triumphed at Roland-Garros as well, punishing Natasha Zvereva, 6-0, 6-0, in the shortest major final in tennis history. After the Wimbledon final, where she beat six-time defending champion Martina Navratilova (5-7, 6-2, 6-1), she had established a heavy domination on the tour, and her next challenge was to win the US Open for the first time to achieve the Grand Slam.

Gabriela Sabatini, from Argentina, was born in 1970. Successful at a very young age, she became in 1985 the youngest player to reach the semi-final at Roland-Garros, where she was defeated by Chris Evert (6-4, 6-1). In the following years, Sabatini, displaying a beautiful one-handed backhand, established herself in the top 10, reaching the semi-final at Wimbledon in 1986 (lost to Martina Navratilova), and two more times at the French Open in 1987 and 1988, each time defeated by Graf. She also claimed eight titles on the tour, the most important one in Boca Raton, in 1988, where she was the first player that year to beat Graf (2-6, 6-3, 6-1). Just before the US Open, she triumphed in Montreal, defeating Natasha Zvereva in the final (6-2, 6-1), and she arrived in New York as world No 4.

The US Open (known as the US Nationals before 1968 and the start of the Open Era), was established in 1881, and, although it is the only Grand Slam to have been played every single year without an interruption since its beginning, it moved several times throughout the 20th century. First held in August 1881 on grass courts at the Newport Casino, on Rhode Island, the tournament moved to New York in 1915, where it was held at the West Side Tennis Club at Forest Hills until 1977 (with the exception of the years from 1921 to 1923, when the event was moved to Philadelphia). In the years between 1975 and 1977, the event was played on clay. In 1978, the US Open left the West Side Tennis Club, which was now too small for such an important event, for the USTA National Tennis Center, located in Flushing Meadows, New York. At the same time, it was decided to change the surface to hard courts. The Tennis Center was one of the biggest tennis complexes in the world:  its centre court was the Louis Armstrong Stadium, which had a capacity of 14,000 spectators.

Graf outrageously dominated the game in 1988, and she was the heavy favourite not only to claim the US Open title, but to achieve the Grand Slam. She had won the three first Grand Slams, dropping only one set in the process, in the Wimbledon final, against Martina Navratilova. She had won eight titles already, and she had lost only two matches since the start of the year, on clay, each against the same player: Gabriela Sabatini, whom she was now facing in the final at Flushing Meadows. The Argentinian had just triumphed in Montreal, and she had been impressive in the six first rounds of the US Open. If anyone could prevent Graf from sealing the Grand Slam, it was her.

In the first set, Graf seemed tense, with the Grand Slam at stake, but she managed to hold on to her serve and break Sabatini first, to take the first set, 6-3. In the second set, the fourth player in the world showed more determination, and took advantage of Graf’s nervousness to push the German into a third set.

In this fateful decider, Graf once again proved her mental strength to overcome the pressure, while Sabatini showed signs of weariness since the first games.

”I knew she had to be nervous,” Sabatini said, according to The New York Times, ”but I just got too tired. I was trying, though. I played like I did against her in the last matches. I hit deep balls. That bothers her very much.”

Even though her game was not quite as aggressive as usual, the German dominated her opponent, who clearly lacked stamina. Graf sealed her victory  6-3, 3-6, 6-1. She had just completed the Grand Slam! The 19-year-old rushed to her box to hug her family and her coach, Pavel Sozil. A ceremony was held on court in honour of her exceptional achievement, and she was given a bracelet with four diamonds, each one representing a Grand Slam title.

Graf’s plan didn’t include throwing a party to celebrate this fourth consecutive major title. She was flying back to Germany to recover before the Olympic Games in Seoul, which were to start ten days later.

“I was aware and the pressure was on, but if I can say anything, I wish it would have been later, so I could have enjoyed it more,” Graf would reflect 16 years later in The Los Angeles Times. “In a way, I feel like as young as I was, that it helped me, but in another sense, it didn’t help me to maybe enjoy it as much.”

Steffi Graf would go on and triumph at the Olympic Games, defeating Sabatini in the final (6-3, 6-3). . She would hold the No 1 WTA ranking until she was eventually deprived of it by Monica Seles in 1991. After Seles’s stabbing in 1993, Graf would recover the top spot until 1997, setting a new record of 377 weeks spent as world No 1. By winning the 1995 US Open, she would become the only woman of all time to win each of the four Grand Slam titles at least four times. When she would retire, in 1999, soon after claiming her last major crown in Roland-Garros, she would have won the amazing total of 22 Grand Slam tournaments.

Gabriela Sabatini would climb as high as world No 3, in 1989. That year, she would lose to Graf in the semi-finals at both the Australian and the US Open, but in 1990, at Flushing Meadows, she would eventually beat the German to claim her first and only Grand Slam title (6-2, 7-6).

In 1991, she would play a last major final (lost to Graf, 6-4, 3-6, 8-6), and she would then remain a top 10 player until 1995, reaching the semi-finals in Grand Slam tournaments no less than seven times. In 1996, struggling with motivation, Sabatini would play only ten tournaments and would retire at the end of the year.