On this day in tennis history, Pistol Pete faced an old foe in the US Open final, and wrapped up his storied career in style. 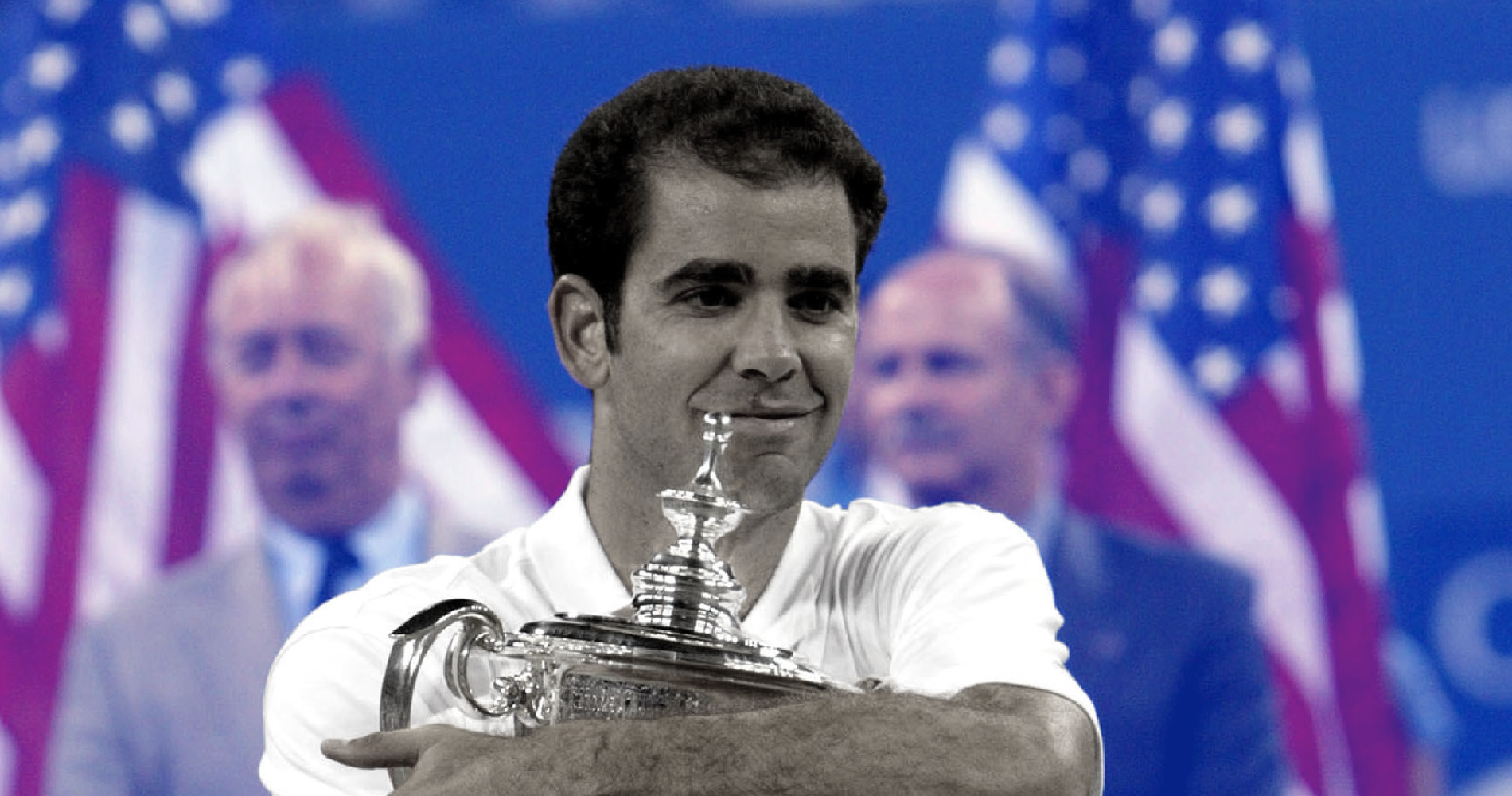 On this day, September 8, 2002, former No 1 Pete Sampras, who had had a terrible year, surprised everyone by triumphing at Flushing Meadows, a feat that many thought he could never achieve again. In the final, Pistol Pete, who was by then only the 17th-ranked player in the world, beat his long-time rival Andre Agassi (6-3, 6-4, 5-7, 6-4), twelve years after he previously defeated him in the US Open final. It was Sampras’ 14th Grand Slam title, which was a record at the time. Although he would not officially announce his retirement until the 2003 US Open, the 2002 final would remain the last match of his amazing career.

Pete Sampras, born in 1971, had dominated the game in the 1990s. After a first Grand Slam at the 1990 US Open (where he became the youngest men’s champion of all time, edging Agassi in the final, 6-4 6-3 6-2), he became world No 1 in April 1993. After having been criticised for reaching the top spot without a major title in more than two years, he consecutively won three Grand Slam titles: Wimbledon and the US Open in 1993, followed by the Australian Open in 1994.

This Date in 1990: Pete Sampras beats Andre Agassi to win US Open, his 1st of 14 grand slam titles pic.twitter.com/6CBgjqosWk

Amongst many unforgettable moments in his great career, tennis fans would always remember his tears during the 1995 Australian Open quarterfinals against Jim Courier, when Sampras was shocked after finding out his coach Tim Gullikson had been diagnosed with brain tumour.

From a technical point of view, Pete Sampras was famous for his deadly serve, his amazing running forehand, his impressive slam-dunk overheads and his extraordinary half-volleys.

Pete Sampras’ career was strongly impacted by his rivalry with Andre Agassi, which had started in the final of the 1990 US Open, and peaked in 1995, when they fought for world No 1, facing each other in three Masters 1000 finals and two Grand Slam finals – Agassi prevailed in Australia and Sampras took his revenge in New York. Even when Sampras started to decline in his late years, he always performed at his best when facing Agassi. Their masterpiece remained their encounter in the 2001 US Open quarter-finals, Sampras winning 6-7(7), 7-6(2), 7-6(2), 7-6(5) without any breaks. 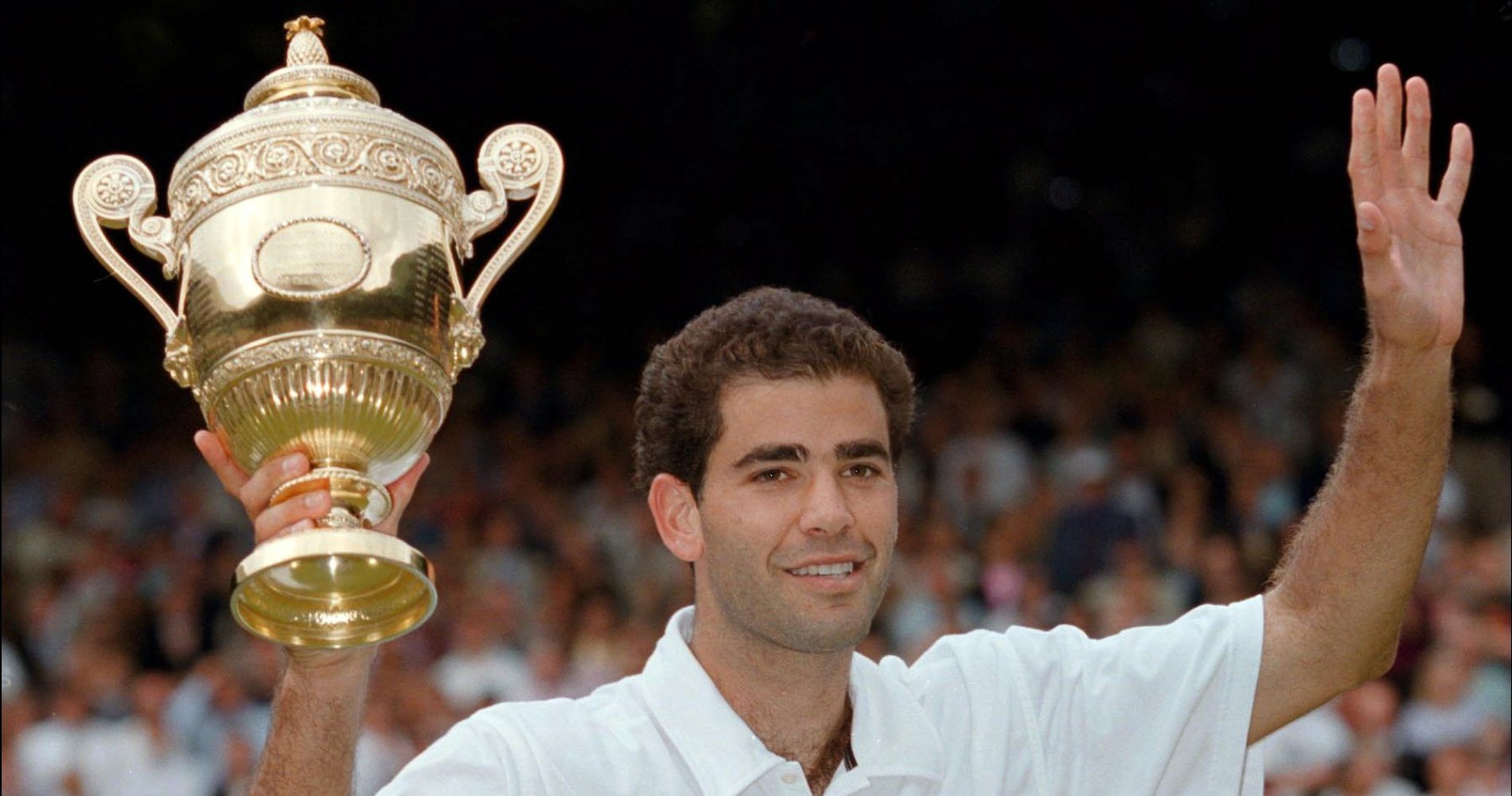 Andre Agassi, the Las Vegas Kid, was a tennis legend. He had turned professional in 1986 and he soon became one of tennis’ biggest superstars, thanks to his amazing tennis skills but also to his interesting outfits, including iconic denim shorts and the pink cycling shorts (worn as an underlayer). Taught by his father and developed at the Nick Bollettieri Academy, his game relied on a great return (the best of his era) and on hitting the ball on the rise on both sides with incredible power, which was revolutionary at the time and then copied by generations of tennis players.

In 1996 and 1997, despite a gold medal claimed at the 1996 Olympic Games in Atlanta, Andre Agassi had a very hard time and his ranking dropped as low as No 141 in the world. Displaying great humility, he went back to play on the Challenger tour at the end of 1997 to regain confidence. He slowly came back to the top in 1998, finishing the year as world No 6, although his Grand Slam results were disappointing. In 1999, he eventually triumphed at Roland-Garros, eight years after his second lost final, after a dramatic final where he edged Andriy Medvedev (1-6, 2-6, 6-4, 6-3, 6-4).

The US Open (known as the US Nationals before 1968 and the start of the Open Era) was established in 1881, and, although it is the only Grand Slam to have been played every single year without an interruption since its beginning, it moved several times throughout the 20th century. First held in August 1881 on grass courts at the Newport Casino, on Rhode Island, the tournament moved to New York in 1915, where it was held at the West Side Tennis Club at Forest Hills until 1977 (with the exception of the years from 1921 to 1923, when the event was moved to Philadelphia). At Forest Hills, the Centre Court built in 1924 could host 14,000 spectators.

In 1978, the US Open left the West Side Tennis Club, who was now too small for such an important event, for the USTA National Tennis Center, located in Flushing Meadows, New-York. The Tennis Center was one of the biggest tennis complexes in the world:  its centre court was the Louis Armstrong Stadium, which had a capacity of 14,000 spectators.

Although the 2002 US Open final was a classic, the 34th encounter between Pete Sampras Agassi, seeing these legends facing each other that day was indeed surprising, considering they had both lost in the second round at Wimbledon. In fact, Sampras, who had lost his No 1 seat almost two years before, in November 2000, had struggled a lot in the previous months. Many experts and journalists considered him as no longer a contender for big events after his second-round loss at the All England Club against a lucky loser, Georg Bastl, the world No 145. Pistol Pete was the only one still believing in his abilities, claiming that he still thought he was capable of clinching a Grand Slam title. Defeated by No 70 Wayne Arthurs in the Cincinnati second round, he lost in the first round of Long Island against Paul-Henri Mathieu, 85th player in the world.

In a tense press conference, he confirmed his ambitions for the US Open, and told a sceptical journalist : “Remember who I am and where I’m playing next week.”

Sampras was challenged in the third round already, narrowly escaping an early loss against Greg Rusedski, 7-6(4), 4-6, 7-6(3), 3-6, 6-4. His opponent would not spare the legend in the following press conference, as related by The New York Times.

“I’d be surprised if he wins his next match. I think the movement is not the same and the fitness is not the same. I wouldn’t put any money on him, let’s put it like that.”

From the first games, Sampras set the standards for the day: his serve was strong and precise, his volleys lethal, his forehand as deadly as ever. On the other side of the net, Agassi seemed slow-footed, stunned by the offensive demonstration put up by his rival. Soon, Pistol Pete was up two sets to love, 6-3, 6-4.

In the third set, he showed signs of weariness, while Agassi’s returns and passing shots were getting sharper by the minute. The Las Vegas Kid won that set, 7-5, and it looked like the dynamic had changed. However, relying mostly on his serve, Sampras stayed level. Down 3-4 and break point, he fired one of his 33 aces of the day to stay alive in the fourth set, and he took Agassi’s serve in the next game. A few minutes later, a last backhand volley sealed his 14th Grand Slam title.

The backhand volley that gave Sampras his last major title would be the last shot of his career. Although after the final, he dismisssed the idea of retirement, he did not play again and when he skipped Wimbledon in 2003, he decided to quit professional tennis – meaning he had the privilege of having ended his career on a last victory.

Agassi would claim a last Grand Slam title at the 2003 Australian Open, and would even occupy the No 1 spot again the same year. Troubled by injuries, he would still remain a solid top player until 2005, when he would reach his last major final at Flushing Meadows, before retiring in 2006.