Home » News » #UkraineRussiaWar » A rare ray of sunshine for Lesia Tsurenko, who details the horrors of war in Ukraine after victory

Lest we forget the heartbreaking and brutal details of the war, we have the courageous athletes of Ukraine to remind us of the horrors – and what the support of the public means. 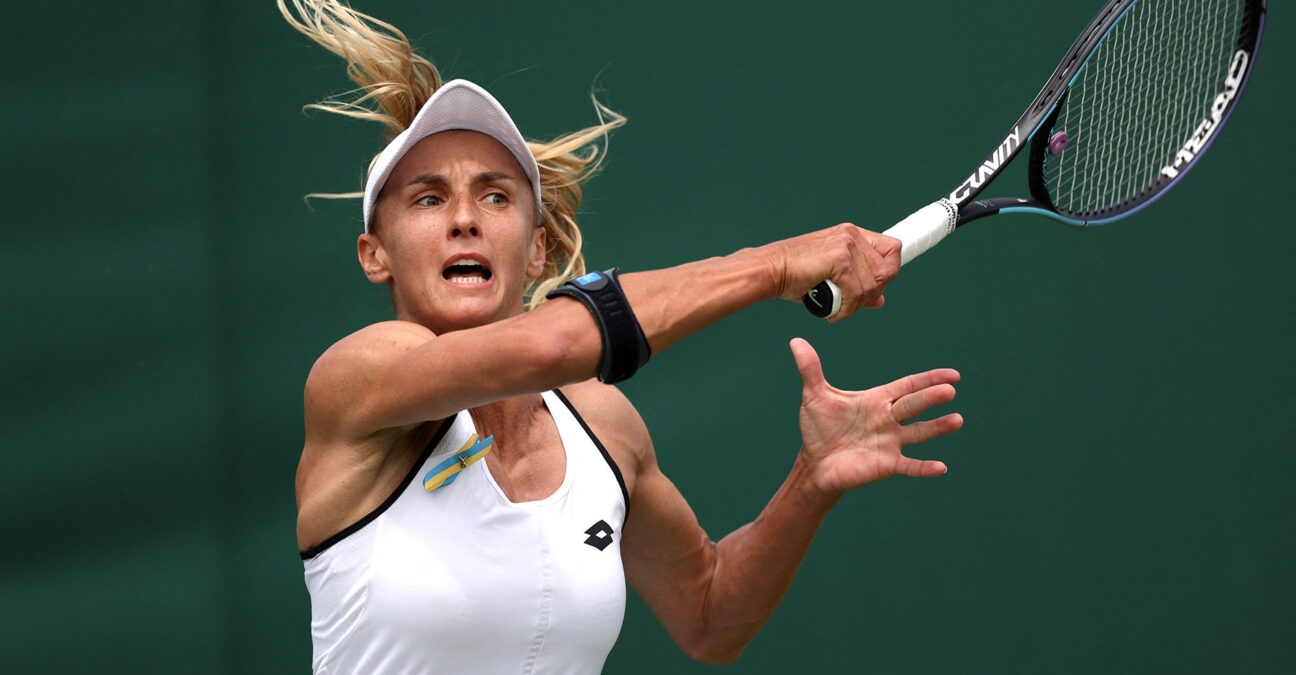 The horrors of war are real and they have touched the lives of citizens – and tennis players – of Ukraine perpetually since Russia’s invasion began on February 24. At first the world reacted with shock and disbelief, but after time many become numb to the seemingly hopeful situation that exists.

Yesterday at Wimbledon Marta Kostyuk alluded to that phenomenon.

“Our brains, you know, our minds, they get used to things, no matter how good or bad they are,” she said. “Because, you know, if I lived the last couple months the same way I lived first couple weeks, you know, I probably wouldn’t be here now. It’s impossible to survive.”

Tsurenko – this war was made by Russia

Lesia Tsurenko wore a ribbon to support Ukraine during her second-round victory over compatriot Anhelina Kalinina on Day 3, a helpful bend of the rules from the tournament that is notoriously picky about uniform specifications for players. That was a kind gesture, but it doesn’t change the tone of what has been a horrifying year for the people of Ukraine.

Tsurenko explains that she has lived most of her life in fear of repercussions from Russia.

“My family lived in Georgia. So in 1993, on the New Year night, from 1992 to 1993, we escaped from Georgia, because it was a war there,” she said. “This war was made by Russia, so for me is the second time when kind of my family is affected by Russian government, by the actions of Russian government.”

Playing for pride, but much more than that

For the players they must block it out and try to focus on tennis, and we learned first hand from Anhelina Kalinina of the importance of achieving success on tour this season. She told the media earlier this week that her parents’ home was bombed and that several family members are now living in her small home. The victories she earns on tour are for more than pride, that money is necessary to help her family, friends and compatriots survive.

“Their house was attacked,” she explained. “There are huge holes in the house, like huge holes. There are no apartments anymore.”

The sheer brutality of what they face makes it easier to understand Wimbledon’s ban of Russian and Belarusian players at the Championships. In the eyes of the Ukrainian players, there is no other way.

“We cannot compare this ban of these players to what’s going on currently in Ukraine,” Kalinina said. “We cannot compare this what they are now missing and how many millions of people are killed, still dying, and how many refugees are brought and surviving, with mothers with their kids, people are out of money, out of family, out of their jobs. They don’t have anything. They are like homeless.”

We feel the support

It was a rare ray of sunshine in an otherwise dreary year, as Tsurenko and Kalinina shared Court No.12 on Tuesday for a spot in the third round. Tsurenko, who is into the third round at Wimbledon for the second time and the first time since 2017, said it felt incredible.

A rare ray of sunshine for Lesia Tsurenko, who details the horrors of war in Ukraine after victory
tennis majors

“It was a big court. Two Ukrainians. A lot of people were watching us. We felt amazing support, for sure,” she said.

She told a story of how her driver has taken in two Ukrainian refugees, and shared how important the world’s support is during this time.

“She took two people from Ukraine in her house,” she said. “So I think it’s amazing when people do, when people help Ukrainians so much.

“I saw it, how people lost, they feel really lost. I have been at the Polish border with Ukraine, and I saw hundreds, thousands of people. They just don’t know where they go. They have all their life in two bags. They have kids, grandfather, grandmother maybe with them, and some, also disabled people. And they are lost.

“So any support that you give to Ukrainians is amazing.”

Tsurenko wants people of the world to know that their charitable contributions do make a difference in Ukraine, where people struggle to make ends meet as they dodge the violence that has permeated the country.

“If there is something that every person in this world can do, I think it’s good if they do it,” she said on Wednesday. “If they think that to donate $10 means nothing, no, it’s not true. It means a lot.

“In the city, in the main city of my region, Mykolaiv region, they don’t have water for few months already. So if you think that $10 is nothing, is 10 bottles of water for these people.”

Echoing the sentiments of Kostyuk, Tsurenko says she has a hard time being around Russian and Belarusian players at the moment.

“Seeing them here really hurts me,” Kostyuk said of her Russian peers at Indian Wells.

“I am Ukrainian. There is no other opinion in my head,” she said of Wimbledon controversial decision to ban Russians and Belarusians.

“I would be the first one to say that, ‘No, you should not ban them.’ But as I told before, I have heard only from one Belarusian player … and from one Russian player, who talked to me personally and told me ‘I’m against the war.’ I did not hear anything from any other player.

“So for me, the silence means… I mean, it’s not good… I don’t know. I thought I have a lot of friends on tour, especially from Russians and Belarusians.”