Australian Open 2020: Djokovic happy with form ahead of eighth final in Melbourne

With 12 singles wins already in 2020, Novak Djokovic is pleased by his form at the Australian Open after reaching another title match. 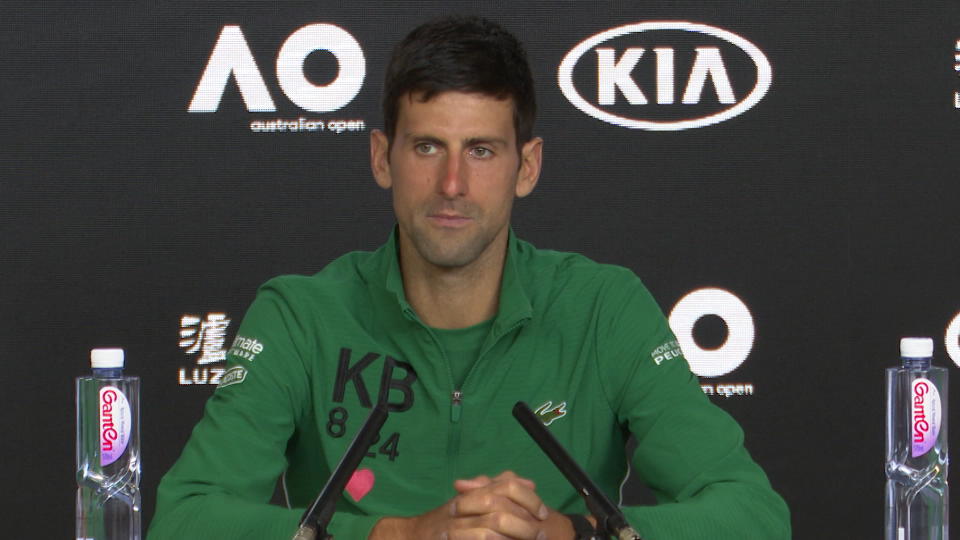 Novak Djokovic is satisfied with his form heading into a record eighth Australian Open men’s singles final after brushing past Roger Federer.

Djokovic dropped a set in the opening round but has cruised through since, including beating a hurting Federer in their 50th meeting.

The seven-time champion in Melbourne has already won 12 singles matches this year and is happy with where his game is at ahead of facing either Dominic Thiem or Alexander Zverev in the final on Sunday.

“Yes, I’m pleased with the way I’ve been feeling and playing,” Djokovic told a news conference.

“I thought the ATP Cup went really well for me, I got a lot of hours spent on the court, singles and doubles. It was a great lead-up for the Australian Open.

“Obviously I got a lot of positive energy from that competition. I’ve dropped only one set so far up to the finals. I have two days of no match right now, which actually is really good. It gives me more time to recuperate and gather all the necessary energy for the finals.”

While he savoured Serbia’s ATP Cup triumph and has dominated in Melbourne, Djokovic will face a first-time Australian Open finalist in either Thiem or Zverev.

By reaching the final for an eighth time, Djokovic now holds the outright record for the most visits to the title match in the Open era, having previously been tied with Federer on seven appearances.

He holds positive head-to-head records against both Thiem (6-4) and Zverev (3-2), but is wary of the duo.

“Well, Dominic won our last match when we played against each other, a close one in London [at the ATP Finals in November]. He played a terrific match against Rafa [Nadal] last night. I watched that,” Djokovic said.

“[He is] definitely one of the best players in the world. Deserves to be where he is. It seems like he’s improved his game a lot on hard-courts, because his game is more suitable to the slower surfaces, the clay of course being his favourite surface.

“But winning Indian Wells I think last year, beating Roger in the finals, that probably gave him a lot of confidence that he can win big tournaments on other surfaces, as well.

“Alex didn’t start the year very well. I watched his matches. I practised with him in Brisbane during ATP Cup. He wasn’t feeling his best on the court, not much confidence.

“It’s impressive with the way he has been playing so far in this tournament, building his game, raising the level of tennis that he’s been playing. It’s his first semi-final at a grand slam in his career, so I’m sure that he is motivated, he’s pumped to get at least a step further. It’s going to be really a good match to watch.”