Daniil Medvedev: “I’m going to try to keep it at 20 for all of them”

The Russian, runner-up in 2019, says he is determined to do everything he can do derail Novak Djokovic’s Grand Slam hopes and win his first major at the US Open 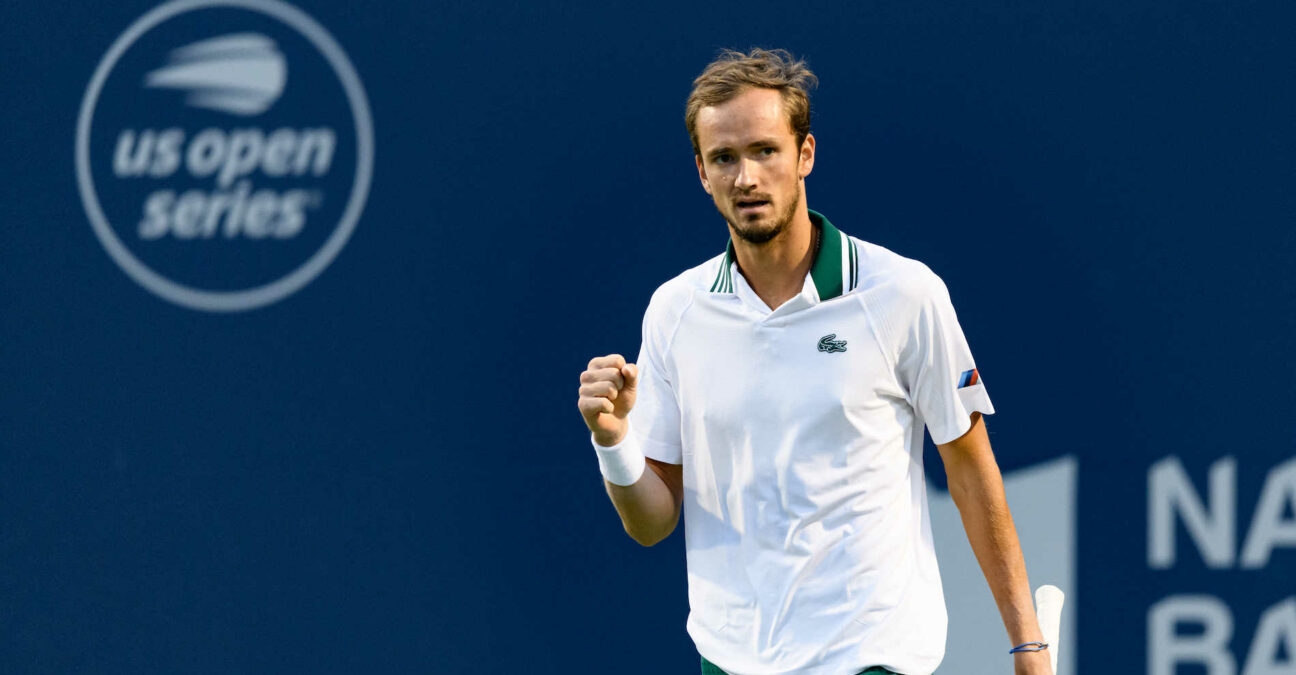 TORONTO, ON – AUGUST 14: Daniil Medvedev (RUS) celebrates after winning a point during his National Bank Open tennis tournament semifinals match on August 14, 2021, at Aviva Centre in Toronto, ON, Canada.

Daniil Medvedev is not hiding his US Open ambitions: he has now played two Grand Slam finals so now he wants a title. In New York, he’s ready to do anything in order to prevent Novak Djokovic from doing the Grand Slam.

Victory for Djokovic would give him a record 21st Grand Slam title, breaking him out of a tie with Roger Federer and Rafael Nadal, but Medvedev, the runner-up in 2019, is in awe of the achievements of the Serb but says he’s ready to do anything to stop him.

The funny thing is: Medvedev should still be tempted to be inspired by Djokovic as he’s entering many years of battle for power inside of his own generation. The Russian knows perfectly how the world No1 found a way through despite his two infamous nemeses.

“He’s just amazing,” Medvedev told reporters at Flushing Meadows on Friday. “I have no other word because, again, when he came, there was Roger and Rafa already there. Probably even me as a kid, like every fan in the world, thought ‘OK, Novak, great player, but he’s going to maybe win a few Grand Slam titles, but he’s never going to be at the same level as Roger and Rafa because, well, they’re amazing’. Still, he was able to almost break all the records in tennis, if I’m not mistaken.

“But well, since I’m here, I want to say I’m going to try my best to keep it at 20 for all of them. I’m sure Novak wants 45 slams, playing until 55. But we’re here to try to keep up at his level and to beat him. Again, we’re not here to let him win the US Open. I want to win the US Open, I don’t care if it’s in the final against a qualifier or against Novak. I just want to win this tournament.”

Increased expectations after two near misses

The Russian is among the players who are landing in New York in great shape and with their eyes on the prize for this US Open. And Daniil Medvedev owns it. Finalist in 2019, he’d love to win his first Grand Slam title here and welcome back in his own way, with the crowd in the stands after their tumultuous 2019 relationship.

“”There are a lot more expectations than before because I remember 2019 very well,” Medvedev said. “My best result at a Grand Slam was (previously) the Australian Open’s fourth round. I said honestly the goal is to try to make it to the quarters. Now I have two finals (US Open 2019, Australian Open 2021) so I need to win in order to make a better result at a Slam.

“I was playing well both in Toronto (won the title against Reilly Opelka 6-4, 6-3) and Cincinnati (beaten by Andrey Rublev in the semi-finals 2-6, 6-3, 6-3), where they use the same balls and where it’s quite the same conditions, hot and humid. I just want to continue at this level. I am really happy that there is going to be full crowd capacity in New York. That’s cool. “

“Out of these young guys, everybody wants to win that title”

The 25 years old, seeded No2 this year, doesn’t fear anyone and is obviously on the very short list of those who can put a stop to Djokovic’s quest in New York. With the way he’s covering the court, with his counter-punching skills, and his athleticism, he should be a nightmare to play for his rivals in the US Open heat and humidity.

Also one can see that it kind of pleases him to be the chaser: He has lots of respect for what Djokovic has accomplished so far but he also dreams of being the one to derail tennis history.

“Out of the big three, only Novak is here and he is of course going for the Grand Slam. Stefanos was in the final of Roland Garros, two sets up. I was in the final in Australia, not two sets up but still in the final. We’re going to try to get him. Out of these young guys, everybody wants to win that title.”

From New York villain to hero

Medvedev won over the New York crowd in 2019, turning himself from the villain into the hero as he took whatever they threw at him and proved his class on the court. Two years on, he’s curious to know if they remember.

“Actually, it’s funny because it’s tough to say if it’s going to be the same people or if nobody remembers what happened two years ago,” he said. “It’s going to be funny on my first match to see how the crowd reacts.

“I just hope because it finished on a good note, it’s going to continue the same way. I love a New York crowd. It was an amazing experience in 2019 in every aspect. I’m just curious to see what it’s going to be like on my first match. I’m going to try to just do the best I can to show a good level of tennis and by this way to make fans support me.”