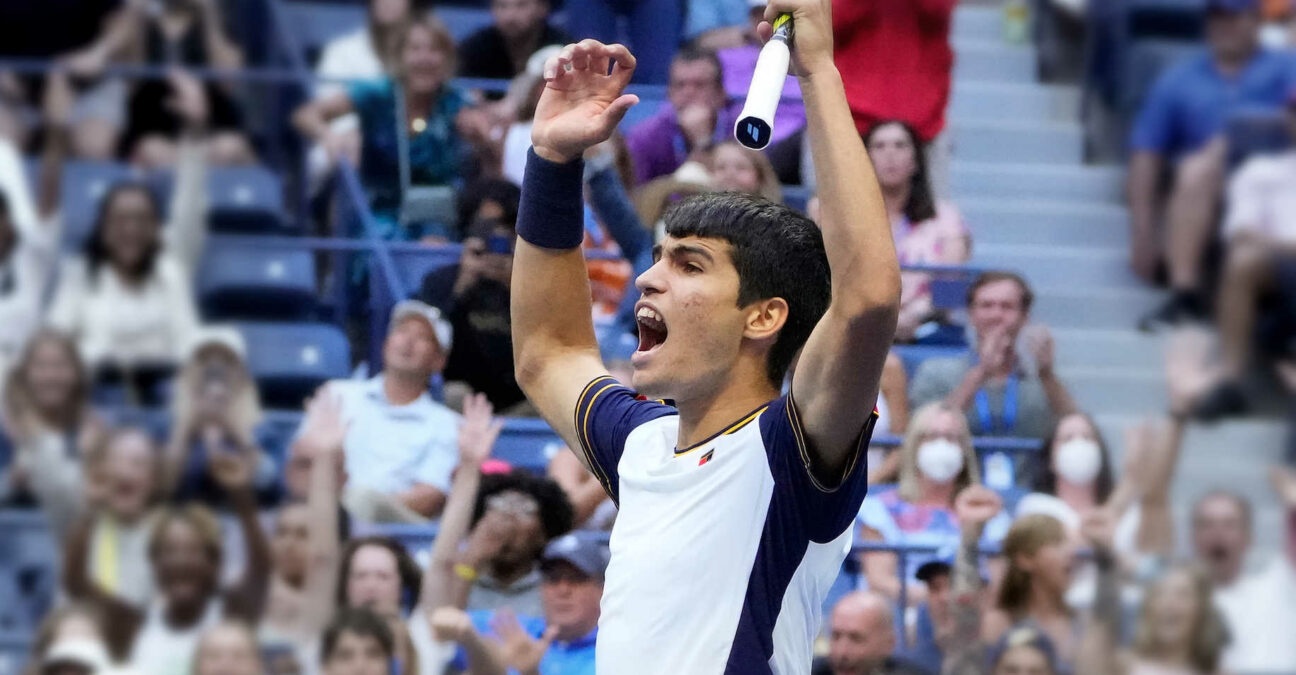 The 18-year-old Spaniard produced one of the most stunning performances as a teenager in US Open history on Friday as he upended the No 3 seed Stefanos Tsitsipas 6-3, 4-6, 7-6 (2), 0-6, 7-6 (5) in a flurry of brilliance on Arthur Ashe stadium court. He will play the qualifier Peter Gojowczyk for a place in the quarter-finals.

Tsitsipas had the crowd on his back from the start – perhaps a result of his issues with bathroom breaks this week – and he will rue his missed chances, having led 5-2 in the third set and missed two set points.

Still world No 55 Alcaraz had to hit back from losing the fourth set 6-0 but the 18-year-old, coached by former world No 1 Juan Carlos Ferrero, somehow lifted his game again to clinch victory in a final-set tiebreak, sending the New York crowd wild.

“To beat Stefanos Tsitsipas, it’s a dream come true,” Alcaraz said. “This victory means a lot. This is the best match of my career and the best win of my career.”

Stunning start from Alcaraz before Tsitsipas fights back

Having drawn the ire of Andy Murray for the length of his bathroom break at the start of the fifth set in their first-round encounter, Tsitsipas was jeered by the crowd when he took another break in his second-round win over Adrian Mannarino.

Right from the start against Alcaraz, the crowd was on his back but he had just as much trouble from the performance of the 18-year-old, who played some stunning tennis in the opening set as he moved ahead 4-0, some of his forehands sending shockwaves around Arthur Ashe stadium court.

Tsitsipas looked in real trouble when he then fell behind a break in the second but he began to find his range and a missed backhand pass from Alcaraz handed the break back, the momentum staying with the Greek as he levelled the match.

At 5-2 in the third set, with the advantage of two breaks of serve, Tsitsipas had the third set in the bag but suddenly, the wheels came off, prompting memories of last year’s event, when he failed to close out Borna Coric despite holding six points.

Suddenly, Alcaraz was back in it, springing back to life with more brilliant hitting, mixed with clever drop shots as he fought all the way back to force a tiebreak.

Tsitsipas was warned for coaching by his father when trailing 4-1 in the tiebreak and immediately double-faulted and Alcaraz took it 7-2 to move ahead, his coach – former world No 1 Juan Carlos Ferrero – beginning to get animated in the stands.

Tsitsipas takes bathroom break, but a short one

Down two sets to one, Tsitsipas took a bathroom break and was booed by the crowd as he left the court. But this time it was a short one, just three minutes and 43 seconds and the crowd left him alone.

The Greek ripped through the fourth set to love, Alcaraz’s physical level dipping but the Spaniard regrouped at the start of the fifth, going for consistency on his first serve rather than power.

The 18-year-old’s serve was down in speed at the start of the decider, his legs seemingly having little left but his groundstrokes remained razor sharp.

Some of his backhands were bullets, bashing holes in the Tsitsipas defence but the world No 3 remained patient, biding his time for a chance to get the break he needed.

But it never came as Alcaraz stayed strong to hold serve throughout the decider and then, after he thought he had won the match when he sent a lob centimetres long, he clinched victory on his third match point, falling to the court in disbelief.