Home » News » Battle at the top, Thiem vs Goffin & others: Preview of Day 5 clashes

Battle at the top, Thiem vs Goffin & others: Preview of Day 5 clashes

5 matches, 3 in Day session, 2 in Night session: here is UTS Day 5 full schedule. It features a battle at the top between leaders Richard Gasquet and Matteo Berrettini, plus Dominic Thiem and David Goffin square off for the 11th time. 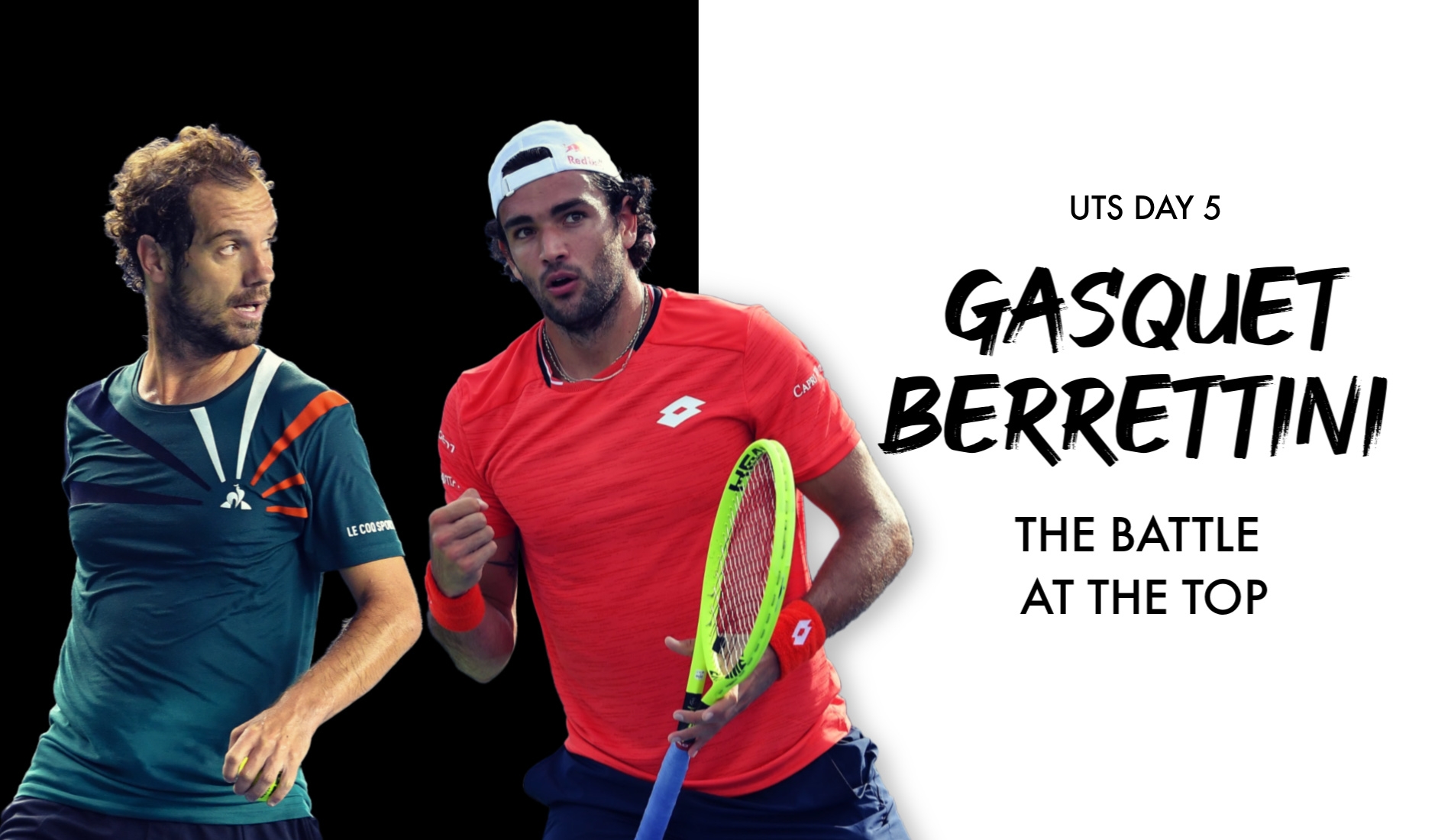 Every artist loves a blank canvas but Dustin Brown had better watch his back today because The Tornado has a creative streak of his own.

Last weekend UTS fans learned quickly that France’s Corentin Moutet is a player on the rise. The freestyling Tornado could have easily been nicknamed the wizard based on his improvisational tennis and the way he blankets the court. A double tweener followed by an obscene drop shot? Moutet did that and more as he split his first two UTS matches, and he played relentless defence as well.

Will it be enough to keep Brown down? As the only player still seeking his first UTS win, The Artist is desperate to make a splash. He’s motivated to prove he belongs with this elite UTS field, but to do that he will need to produce jaw-dropping tennis and take the “free” out of Moutet’s style.

If you like your tennis spicy and your umpires under siege, then we have a UTS battle just for you! Enter the Rebel, Benoit Paire, and the Sniper, Alexei Popyrin, two hot-headed hard-hitters who love to make trouble almost as much as they love to make winners.

UTS founder Patrick Mouratoglou wants emotions to be a big part of the package here in France, and he’s selected wisely with this sizzling pair of personalities. Both players back up their big games with even bigger attitudes…

The drama could be long but the points should be short in this contest. Paire likes to attack behind his serve, especially when he’s chosen his Winner X3 card, and Popyrin’s staple is the serve-plus-one. Aggression and bravery will set the tone, but the eventual winner might just be the player who patiently waits for the right moment to strike.

They got there by playing top-notch tennis over the first two weekends, but today The Hammer Matteo Berrettini and The Virtuoso Richard Gasquet will seek to ride the hot hand to higher ground in a battle of the top two players in the UTS standings.

Gasquet has been playing out of his skull through four matches, with a sudden-death loss to Stefanos Tsitsipas as the only blemish on his record. It looks and feels like he has found the fountain of youth in the South of France.

Berrettini has been soldiering through smartly as well, brandishing his mighty hammer with confidence in three decisive victories as he has gained comfort with the UTS format.

So who has the edge? This battle could come down to which player uses the short, intense UTS format to their advantage. If the 34-year-old Gasquet has his way, he’ll entice Berrettini into crosscourt backhand rallies all night long. But the Hammer has the weapons to wreak havoc on a game plan. If he serves well and controls the rallies he’ll have a shot to vanquish the Virtuoso.

The Greek God was the only undefeated player at UTS until late Sunday evening, when Dominic Thiem sent him back to earth with a thud. Today The Torero Feliciano Lopez will look to continue that trend and send Stefanos Tsitsipas all the way to the underworld.

38-year-old Lopez has been a worthy adversary in each of his four UTS tilts, and if it wasn’t for a sudden death loss to David Goffin on Sunday he’d be tied with Tsitsipas at the top of the table.

Tsitsipas may be 17 years younger than Lopez but the Greek God hopes to be the one doling out lessons during their first ever meeting… Ever the perfectionist, Tsitsipas was not happy with his play or his use of the cards last weekend and he’s determined to raise his level against the Spaniard today.

Both players will come out swinging. Both are hungry to stake a claim at the Top of the UTS table. It will come down to the one who will have the guts to come up big when it matters most.

Dominic Thiem found his UTS groove last weekend when he handed The Greek God Stefanos Tsitsipas his first loss in a thrilling encounter. Today the Austrian will try to blast through David Goffin’s wall to prove that his dominance in the South of France runs deep.

But buyer beware: Thiem’s dream has turned to a nightmare against Goffin before. It has been a hard road on hard courts for Domi, who has lost all four of his completed matches against Goffin on the surface.

The Wall will also take confidence from recent form. After a pair of week two wins he’s now locked into fourth place in the UTS rankings and looking to go higher today. Thiem will want to change the course of the rivalry and force The Wall to crumble. But Goffin hopes to tower above the Austrian today.