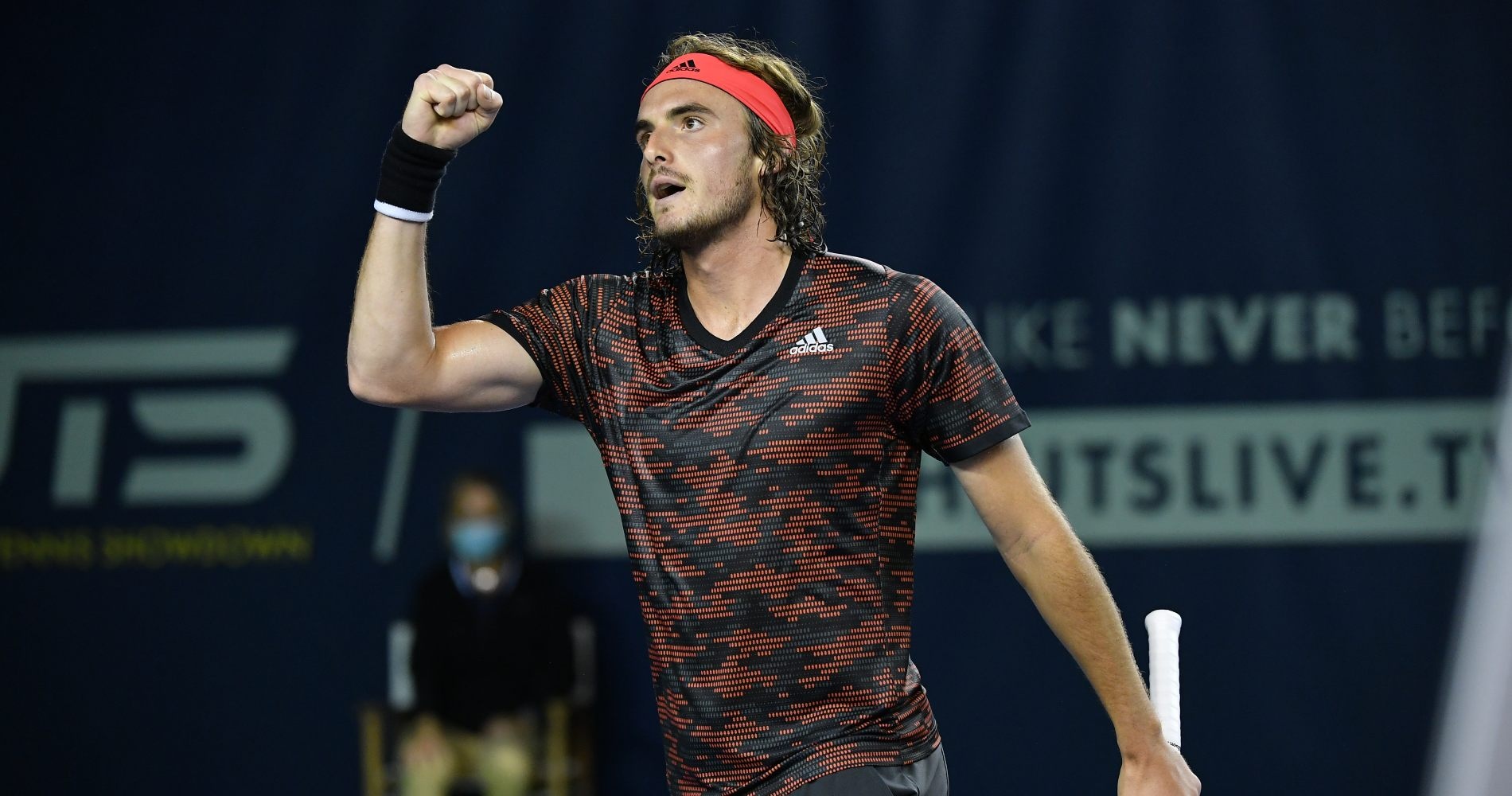 This Day session is over. Thanks for having followed us. Congratulations to Benoît Paire, David Goffin and Dustin Brown on three clean wins. Let’s meet at 9 pm for Day 3 night session with two matches coming up:

13-9 TSITSIPAS – Clean move from the Grek God as he steals serve at 11-9. He has used the card to perfection today.

7-5 BROWN – The German uses both of his cards. He can’t make a first serve in four points but wins three of them.

4-4 – The Artist creating again with a drop shot winner.

15-9 TSITSIPAS – Two more winners from the world No 6. That surely secures the quarter for him as there is one minute to go and Brown has already used his cards.

11-7 TSITSIPAS – The Greek steals serve but it proves ineffective as the German wins both points.

1-0 TSITSIPAS – The German is highly unhappy with a line call.

“I usually play quite well when I am pissed”, admitted Tsitsipas at the changeover

TSITSIPAS MAKES IT ONE QUARTER APIECE, 18-13

“Approach, come to the net”, says Apostolos to his son during a coaching time out.

13-5 TSITSIPAS – Tsitsipas’s level of play has risen significantly. The Greek is enjoying a strong lead now in this second quarter.

8-4 TSITSIPAS – 3-pointer from Brown with an ace. But he then looks for another one and double-faults.

5-0 TSITSIPAS – The Greek takes the lead with four clean winners. He is converting his angriness to his tennis.

“I was too passive on my serve”, says Stefanos Tsitsipas at the change over.

13-12 BROWN – Too good from Dustin Brown. The German stole serve at the very best moment. What a comeback from the Artist.

12-10 TSITSIPAS – Great athleticism from Tsitsipas on a Brown drop shot.

9-8 TSITSIPAS – Magnificent sliced ace from Dustin Brown. It gives him 3 points as he used his “x3” card.

9-5 TSITSIPAS – The Greek God wins four points in a row.

5-5 – Dustin Brown bringing the show. What a couple of winners from the unpredictable German. Absolutely stunning!

5-3 TSITSIPAS – As he promised, the Greek is playing aggressive tennis and takes the lead.

2-2 – Both players holding their serve to start the match.

The last match of today’s day session promise to be full of great shots. Stay tuned.

Match 2: Alexei Popyrin “The Sniper” vs David Goffin “The Wall”

David Goffin gets his first win of UTS. That is the first 4 quarter to love win in UTS history.

15-10 GOFFIN – Goffin is prevailing at the end of this quarter. What a performance from the world No 10 in this match.

11-10 GOFFIN – Great fight between these two in this quarter. Some beautiful rallies.

8-8 – Lovely play from the Belgian who continues to dictate play in this match.

2-0 GOFFIN – Goffin is aiming to be the first man to win a match four quarters to love.

“I have to relax”, says Popyrin

12-10 GOFFIN – Goffin is taking the lead with a couple of winners. Beautiful stuff.

3-1 GOFFIN – A couple of unforced error from Popyrin, who almost started to break his racket here.

14-6 GOFFIN –  Goffin “The wall” making an unforced error for the first time in a while.

12-4 GOFFIN – The Belgian scores another 3-pointer with a good volley winner.

3-2 GOFFIN – Goffin is everywhere. The world No 10 is acting up to his nickname.

2-0 POPYRIN – Two lovely winners from Popyrin who comes up refreshed in this quarter.

“He barely missed a ball and I missed too much”, analyzed Popyrin at the change-over.

QUARTER 1 GOES TO GOFFIN – It has been a flawless quarter from the Belgian.

16-8 GOFFIN – David Goffin is being too solid and this quarter is been all Goffin.

3-3 – Both players are playing very aggressive tennis in the first points of this match.

Next up is Popyrin vs Goffin. It is their first-ever meeting. The Australian is 2-0 in UTS. The Belgian is 0-2. He needs to win.

Match 1: Corentin Moutet “The Tornado vs Benoit Paire “The Rebel” 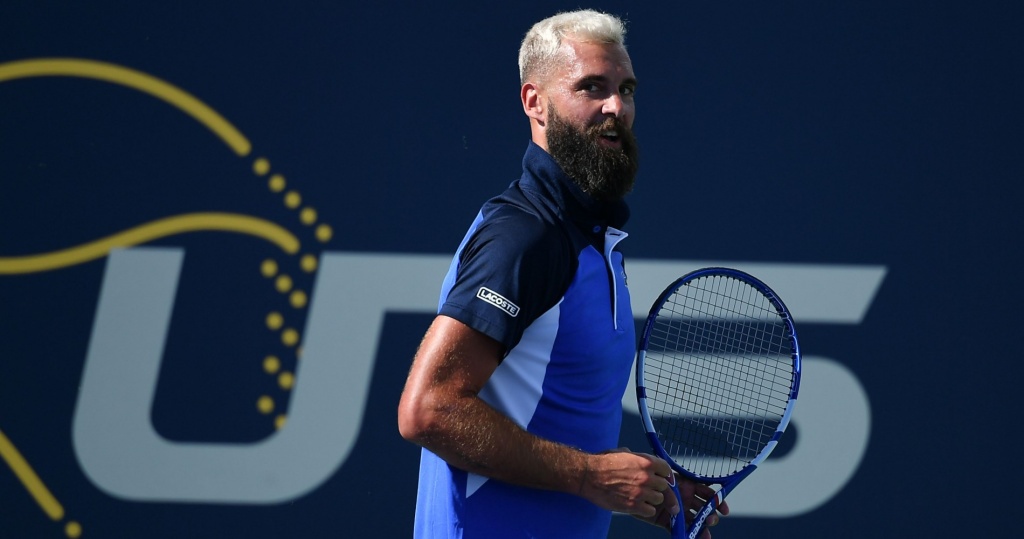 14-13 PAIRE – Benoit Paire steals serve at 13-13 and hit a big serve to wins the quarter and the match. He let a ball fall from his pocket to let the clock run.

9-9 – Very smart use of the “-1 serve” by Moutet as Paire loses both points with unforced errors.

3-1 PAIRE – Great tweener from Corentin Moutet but Paire proved vigilant at the net.

PAIRE INCREDIBLY WINS QUARTER 3, 15-14 – “WHAT A COMEBAAAAACKKK”, HE SHOUTS

Quote of the day from @benoitpaire who came back from 14-10 down to steal the third quarter 15-14.#UTShowdown pic.twitter.com/3klbUHUbBq

15-14 PAIRE – What an end to a quarter. Paire steals it with a forehand winner!! Incredible. Moutet will have to check his backpacker.

14-14 – What a turnaround from Benoit Paire once again! At 14-12, Moutet did an underarm serve which proved ineffective.

13-9 MOUTET – Down 13-7 with 3 minutes to go, Paire steals serve and wins a couple of points with winners. Very clever move.

9-3 MOUTET – Benoit Paire overcooks again at the net when using the x3 card.

3-0 MOUTET – Moutet takes the lead thanks to a Paire’s sleepy start.

Swept away by The Tornado 🌪@moutet99 introduces himself in style to #UTShowdown with TWO tweeners and a stunning pass! pic.twitter.com/rRVBYk9PXj

11-4 PAIRE –  Funny scene. Moutet is speaking with Benoit Paire’s coach during the coaching time out instead of Paire. The coach advises him to go to the backhand, Benoit’s favourite shot. Moutet does so and wins the point.

9-3 PAIRE – “The tornado” Moutet uses his winner count 3 UTS card and nearly got the pick up twice with a serve and volley.

2-0 PAIRE – Paire coming to the net and finishing with a volley on both points.

14-9 MOUTET – As he promised, Paire uses his serves and volleys on both occasions when using his “x3” card. But he can’t produce a winner.

13-7 MOUTET – Moutet enjoys a six-point lead and there are 3 minutes to go.

10-6 – Moutet uses his “-1” UTS card and it worked absolutely well as Paire misses both serves and loses two points. Incredible.

1-0 MOUTET – The first point of the day goes to Corentin Moutet. His first ever in UTS.

Thiem vs Gasquet, Lopez vs Berrettini & others: Preview of Day 3 clashes

Tune in for Day 3 tomorrow from 4:00pm CET 👉 https://t.co/rCdRHyOeZ0 pic.twitter.com/alvqz8B2yX

THEY WILL BE FOLLOWED BY THE NIGHT SESSION: