At the third time of asking, Richard Gasquet is into the UTS final after a dramatic win over American Taylor Fritz.

When you are Richard Gasquet and playing the UTS, if at first you don’t succeed, try and try again.

Making his debut in the competition, Fritz was outfoxed by Gasquet in the first two quarters, with the Virtuoso using the cards to perfection to take a commanding lead. But the 22-year-old American fought back superbly and looked favourite going into sudden death, only for Gasquet to save match point and clinch victory 2-1 to seal his place in the final.

“I played a great match point. The last forehand was crazy, it was a great shot. I’m a bit tired now but I’ll be OK for Sunday.”

Gasquet was on song in his opening match when he thumped El Torero 4-0, maintaining his stranglehold over the Spaniard with his third win out of three in UTS battles.

Fritz started strongly, up 5-3, used next point counts double, won first with another long rally, trying to run the legs off Gasquet. But Gasquet is a master of the UTS format and he used his next point counts double card perfectly yet again, winning both points to move in front, 8-7. At 9-8, Gasquet used the winner x 3 card, and the Frenchman put a smash away for the first one, 12-8, followed by an ace down the T. 15-8! Fritz banged down a 222kmph serve and got within four but the gap was too big. Gasquet used up all 15 seconds between points and then slammed an ace, winning it 18-15.

“I’m used to it, it’s his first time,” Gasquet said. “I know exactly when to use the card and how important it is. At the start he was playing better than me but he was only winning one point.”

Fritz said he had been outdone by experience. “He was able to use the X3 points and the X2 on both points, so he got six extra points and that’s what got me in the end. I’ve just got to make sure I don’t let him win those X2 and X3 points.”

At 4-4 in the second quarter, Gasquet unloaded on his backhand for perhaps the first time all evening and Fritz was panicked, trying to use his winner counts for three card, but to no effect.

“I’m struggling too much thinking about the cards,” he told his coach at a timeout. 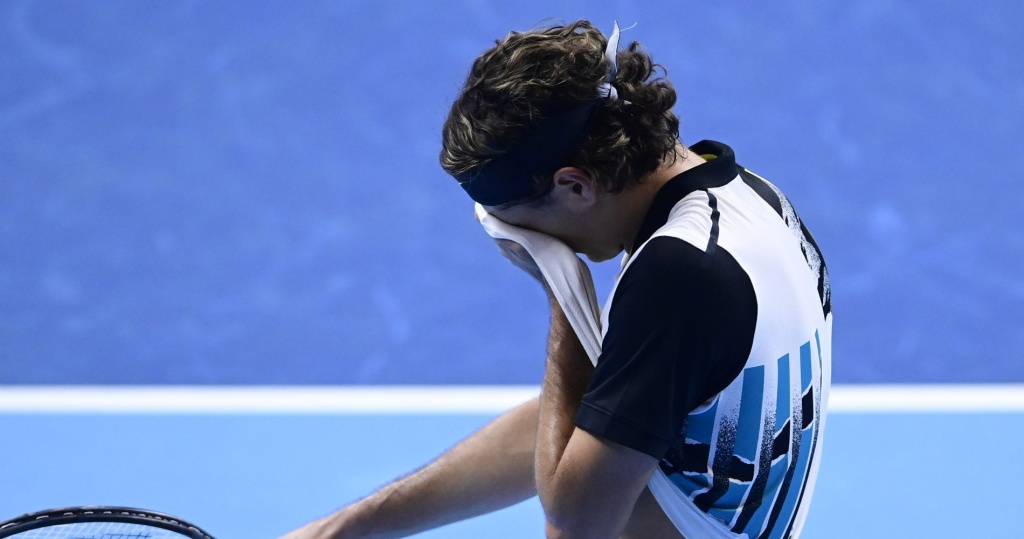 Fritz cut the gap with some good serving and five points in a row made it 10-10. But Gasquet still had his next point counts double, and he won both to go up 14-10 with two points to go, and both men out of cards.

Again experience showed as Gasquet ran the clock down perfectly, and a deft backhand volley gave him the quarter 17-14.

“I like to play the young guys,” Gasquet said. “I’m playing good, I have experience of the format,” he said. “I have one more (quarter) to win, he’s still fresh but I feel OK.”

Fritz had just one idea of how to get back into the match.

The Hotshot made a much better start to the third quarter as he led 3-0 so Julien Cassaigne called a timeout and said:

“It was a long point so you need to rest a little.”

Gasquet recovered from 7-3 down to level at 7-7 but Fritz was beginning to find his game and The Hotshot stormed ahead 18-11, helped by an outrageous reverse serve as he clinched it 21-12 to get himself right back in the match.

“I’m feeling good,” he said. “The key is not to let him win the multiplier. I’m trying to hold onto them a little longer.” And the reverse serve? “It’s just something I’ve been working on in practice. It looks good when it goes in, but it looks bad when you miss”.

Suddenly Gasquet looked a little jaded and Fritz began to cut loose, sending down one serve at 227kmh as he opened up a 10-6 lead, with the Frenchman already having used both his UTS cards, for once to little effect.

The 22-year-old American looked fresh and with that big serve clicking nicely, he cruised through the remainder of the quarter to take it 20-10 and take the match into sudden death.

A slower than expected serve fooled Gasquet on the opening point but the Frenchman stayed strong, saving match point with a fine backhand volley and then winning it with a stunning forehand cross-court on the most acute of angles.