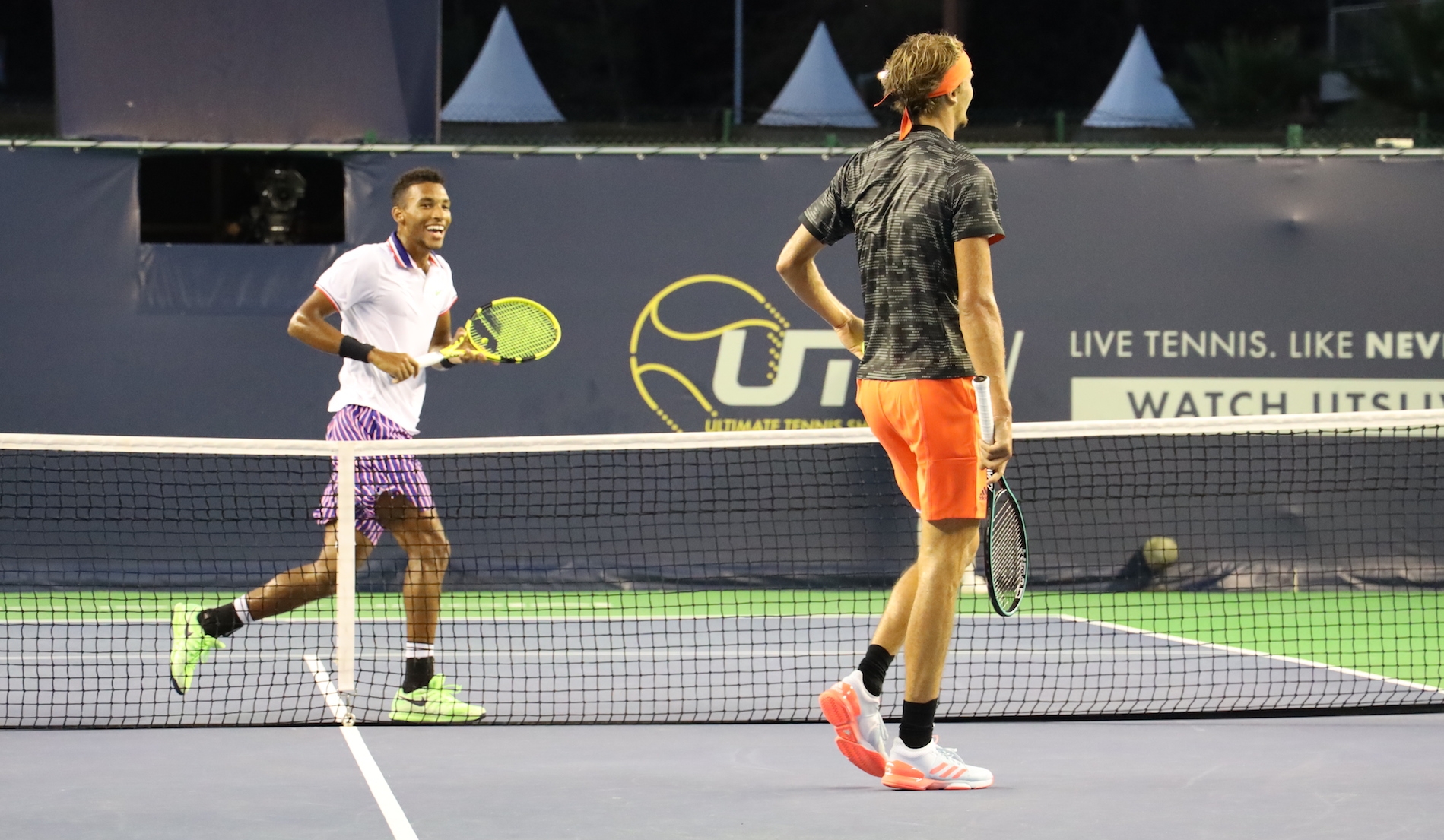 Zverev, Gasquet impress on men’s side, women’s final is Cornet vs. Pavlyuchenkova

Alexander “The Lion” Zverev won his debut match at the Ultimate Tennis Showdown when he beat Felix “The Panther” Auger-Aliassime in sudden death. As the two automatic semifinal qualifiers, Zverev and Auger-Aliassime are joined in the Final Four by Richard “The Virtuoso” Gasquet and Corentin “The Tornado” Moutet. The Virtuoso has been sensational all month, having also reached the semifinals in UTS1 and now again in UTS2.

In the first-ever women’s event, the final is Alizé “The Volcano” Cornet against Anastasia “The Thunder” Pavlyuchenko. They earned respective wins over Brenda “The Prodigy” Fruhvirtova and Ons “The Warrior” Jabeur on Saturday night.

The lava is flowing 🌋

The Volcano clinches the win 3-0 against Brenda Fruhvirtova.

Credits to the 13-year-old prodigy who kept up the level from the start, pushing @alizecornet to the limit.#UTShowdown pic.twitter.com/vLuPW1dBro

The first sudden death of the day came in the match between Fernando “El Fuego” Verdasco and Dustin “The Artist” Brown. The Artist delivered a flurry of spectacular shots to take a 2-0 lead, but El Fuego hit back to force the sudden-death situation. Verdasco eventually prevailed – but it was only for pride, as he needed to win 4-0 in order to steal the semifinal spot from Moutet.

El Fuego wins in the heat 🔥@FerVerdasco pulled off a Tsitsipas, coming back from 0-2 to defeat The Artist in a sudden death.

Two matches later, Zverev edged Auger-Aliassime in sudden death. Like Verdasco, The Panther did well to recover from a 2-0 deficit and battle his way into a decider. Auger-Aliassime even had a match point, but The Lion took the next two points to clinch victory – which allowed him to pick Moutet as his semifinal opponent instead of Gasquet.

Rematch anyone? 👀@AlexZverev has the last word against fellow UTS first-timer @felixtennis.

He saves a match point in the sudden death to win a suspenseful showdown. #UTShowdown pic.twitter.com/cd6cUZ17R1

The UTS2 Day 3 point of the day

It wasn’t enough to win the match, but Nicolas “The Musketeer” Mahut came up with something special against Grigor Dimitrov. As for Grigor, he came up with some magic of his own on several occasions to get his first-ever victory at UTS.

From defense to offense real quick 🤺

He may be down by a set, but The Mousquetaire hasn’t dropped the weapons.#UTShowdown pic.twitter.com/b3vBjS86bc

The UTS2 Day 3 shot of the day

Dustin “The Artist” Brown was absolutely on fire for much of his match against Fernando “El Fuego” Verdasco, albeit in a losing effort.

“I’m just a tactical genius. That’s what I am.”

Alexander “The Lion” Zverev, who was playing his first-ever UTS match, after saving his winner times three card for the very end of first quarter against Felix “The Panther” Auger-Aliassime – too late for it to be meaningful.

“I’m just a tactical genius, that’s what I am.”@AlexZverev has arrived to UTS in style… 😅#UTShowdown pic.twitter.com/Vg6RRUcYRV