Home » Vidéos » Video News » Exclusive – Zverev: “I felt like I was being very competitive again”

Exclusive – Zverev: “I felt like I was being very competitive again”

In an exclusive interview with Tennis Majors, Alexander Zverev explains how he reacted to the tennis hiatus and how he envisions the rest of the season. 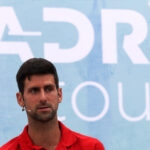 Is Djokovic’s legacy diminished by the Adria Tour fiasco? – Match Points excerpt
Next

Exclusive – Cornet: “I’m ready for the intensity of UTS”

Tennis Majors: How do you feel about this 2020 season?

Alexander Zverev: I’ve been World No 3 for a few years. I think I could maybe gone even further, who knows ? But I’m starting off with my best Grand Slam result that I ever had (NB: semi-finalist at the Australian Open). I was feeling competitive again in the biggest tournaments in the world. I don’t know what could have been. But I felt like I was being very competitive in big tournaments again.

TM: How did you react when Indian Wells announced its cancellation?

AZ: In Indian Wells, if you listened to my opening day press conference, I said that I felt like I could have done extremely well at this tournament. I felt like I could have had a similar or maybe a better result than in Australia. But, as I said, things like this, you have no control over. You can’t do anything about them. But they unfortunately happen and we just got to hold together as best as we can.

TM: How did you train these last few weeks ?

AZ: Obviously, it’s not only the return for UTS. It’s just getting better, stronger and I use the time as best as I can. It’s a very special thing for everybody right now, no sport in six months. So we can prepare better, we can do things that you usually can’t do. I think it is going to be great being on court again.

Zverev: “The US Open, I’m not afraid”

TM: How do you see the end of the season after UTS ?

AZ: We’ll see when it continues, where it continues . We obviously are all hopeful for New York, but the United States are a little bit a dangerous place to go right now. But we’ll see what they will decide about the tournament.

TM: Are you afraid to eventually go in the United States?

TM: Doesn’t it bother you to have to play hard court and clay court on such a short notice?

AZ: I’ve done it last year. I played grass court, clay court and hard within three weeks, I was on three different surfaces. I’m still quite young, so I hope that I can adjust better than others.