How UTS cast a new light on Apostolos Tsitsipas

At Ultimate Tennis Showdown Apostolos Tsitsipas has probably been the most prominent coach of all. Through the first four weeks of UTS, Stefanos’ father displayed his personality and his relationship with his son. 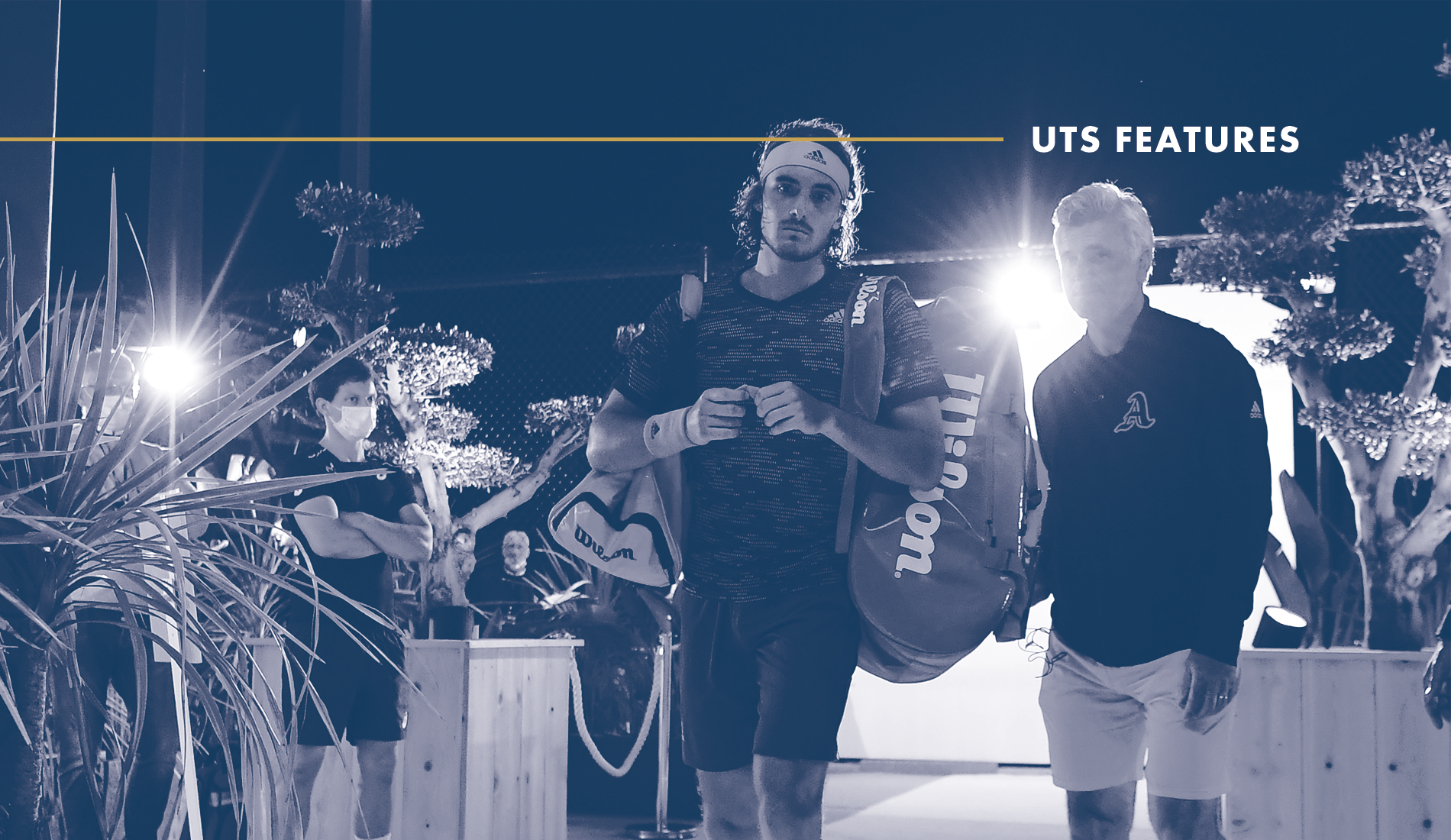 With Ultimate Tennis Showdown, Patrick Mouratoglou wanted to put coaches in the spotlight: “We are going to have them play a role, because they have one, the coach of Serena Williams notably said in an interview with Tennis Majors, before the start of the competition. The players are the main characters, but coaches are supporting actors.”

No doubt the message was well-received by Apostolos Tsitsipas, Stefanos’ father. He is his son’s co-coach, with Kerei Abakar, and has everything it takes to be an important part of the UTS show. Tennis coach of a top player somehow by bloodlines, without having been himself a pro, Apostolos possesses a special brand of intellect and a gift of gab. At the Mouratoglou Academy, the 52-year-old Greek has demonstrated what makes him unique. Apostolos steps on the court with his son before every match, keeps talking to him when he settles in on his chair. During matches, he is one of the coaches who ask for coaching timeouts most regularly.

“We know him. He is not going to change”

And he can spur on drama. Last weekend, in Stefanos Tsitsipas’ match against Corentin Moutet, the Frenchman erupted in the fourth quarter. Complaining that Apostolos was speaking when he was about to serve, Moutet started shouting at him and then argued with Stefanos: “It is not allowed to talk when I serve. It is just not fair play. He is disrespectful. He is the only one to do it on Tour“.

“He pisses me off. He is stupid”, the Frenchman then hit out to the commentators.

Kerei Abakar was seated just next to Apostolos when the scene took place. “The little fight Moutet had with his dad was quite normal to be honest, the high-level tennis Director at the Mouratoglou Academy deems. Yes, Apostolos is talking a lot during matches. We know him. That is his personality. He is not going to change. He gets a lot of warning during matches on the Tour, and a lot of fines, that is how he is.”

At UTS, Stefanos’ father has been able to do more than simply support his son; he also push him to do more, as was exemplified by his coaching time out in the fourth quarter of Stefanos’ match against Alexei Popyrin. At 12-12 with 2 minutes to go, a time when the World No 6 had already sealed the match by winning the first three quarters, Apostolos urged his son to play more aggressively.

Stefanos seemed bored with this advice, replying that it was time to relax. Apostolos doesn’t regret pushing too hard: “As soon as he feels to play defensive it is ok for me but my job is to tell him to do something more“, Apostolos said in a UTS podcast.

In other coaching timeouts, Stefanos sometimes refuses reply to Apostolos and carries a detached body language toward his father’s pieces of advice. A few times, Tsitsipas simply removed his headsets when his father was still speaking.  During Tsitsipas’ match against Matteo Berrettini in week four, the pair conducted an argument in Greek during a coaching timeout. “I just spoke in Greek because I did not want our tactics to be exposed”, Stefanos later told Pete Odgers and Jenny Drummond in another UTS podcast. Such strange behaviour is also evident during training sessions. Stefanos sometimes looks quite irritated and grumbles quite a lot when his father talks to him.

“He sometimes causes me a lot of stress”

Tsitsipas has already opened up on numerous occasions about his relationship with his father. Notably during a press conference earlier this year, following the incident that happened at the ATP Cup when he got miffed and threw his racket toward Apostolos. “It’s not very easy and there are always tensions between us two, the 21 years old Greek explained. “He is a very good coach, but he sometimes causes me a lot of stress.”

He went further into the details in the UTS podcast, saying that ” sometimes, like in the direct communications during the matches, I can feel stress in his voice and that bothers me”. He then assured: “I try not to think about it too much and take the piece of advice he gives me.”

Kerei Abakar minimizes the tension between them: “Sometimes Stefanos is bothered, that is true, but we are not going to change his dad, he claimed. “He did an unbelievable job to bring him where he is today. Sometimes Stefanos gets mad and they can have fights. But that is part of the game.”

Apostolos doesn’t take umbrage at his son’s reactions when he speaks. “I am here to remind him the basics and of course it is boring sometimes, he told us. Sometimes he shows it like against Corentin. But I know he is listening“. He went on: “I was a teacher before and I think he is the best listener I have had in my whole life. He is such a great listener.”

Still, in Stefanos’ behaviour, there is the look of a pupil that wants to loosen the grip his teacher has on him, as he told in Dubai earlier this year that his parents were “way too involved in his life“. 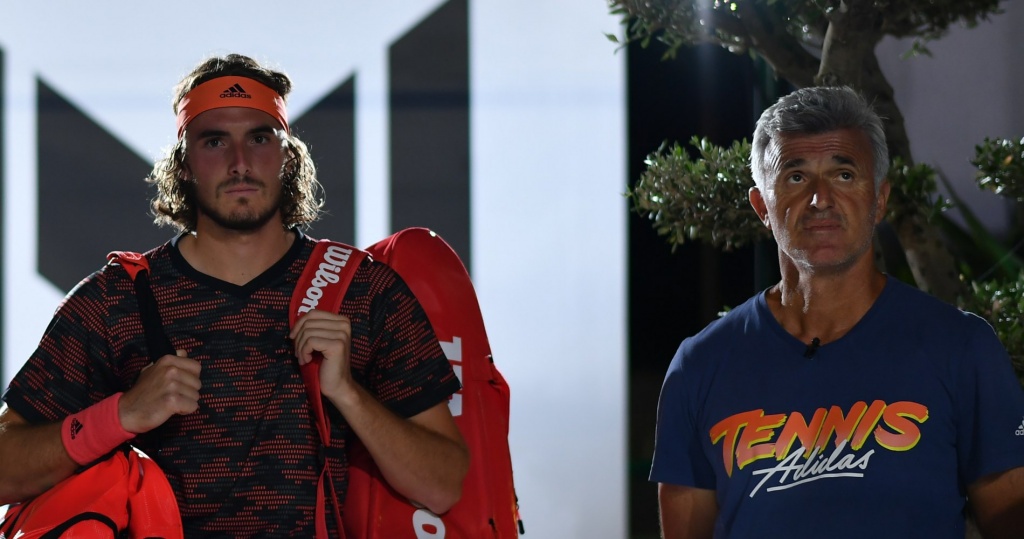 Kerei, which is only travelling with Stefanos eight weeks a year, as he has a lot to do at the Academy, has a key role as a mediator between the two. “He feels confident when I am around, a bit calmer than with his dad. I am balancing the fire of the dad. The way I am behaving gives him confidence because he feels I trust him.”

Apostolos prefers to reverse perspective. He feels fortunate his son has chosen him and keeps reminding him about this. “When I was Stefanos’ age, my father was no longer here for me. Stefanos has to remind the chance he has to have a father and coach next to him. I would have loved it.”

The Apostolos show is not over.

YOU CAN LISTEN TO UTS PODCAST HERE

American, Big serve, Sakkari: Everything you always wanted to know about Alycia Parks (but never had time to find out) – updated with first WTA Tour title