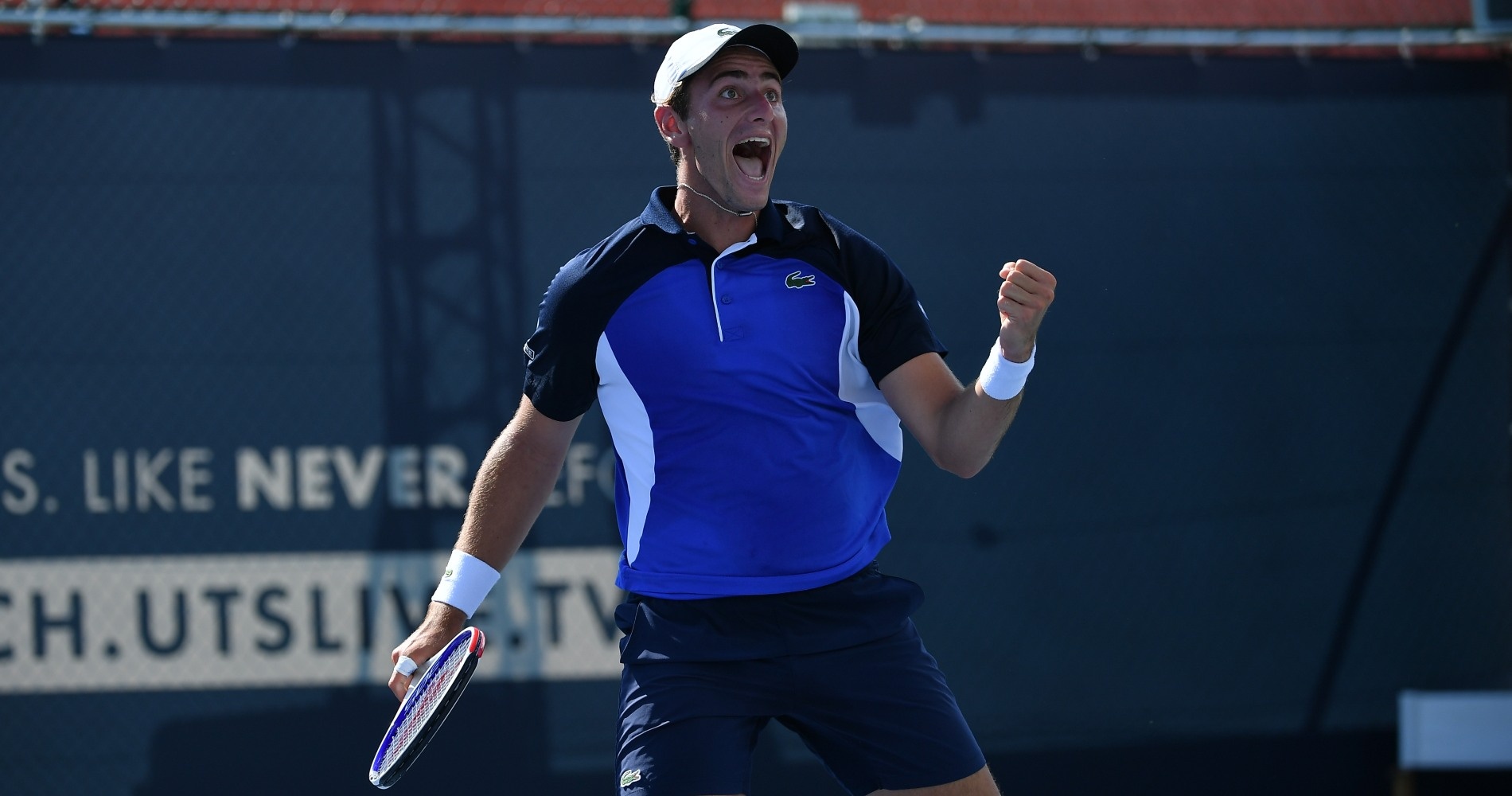 Following his defeat at the hands of Alexei Popyrin Sunday, victory for stand-in Benchetrit will be a boost to the returning Dominic Thiem in this round-robin event, while it is by no means over for Pouille, who still has seven matches to play over the coming weekends.

Benchetrit, nicknamed “The Underdog”, lost out to 3-1 to Alexei Popyrin on Sunday but came out strongly in the first of the four 10-minute quarters, racing to a 6-2 lead as Pouille threw in three early double faults.

The use of UTS cards, two of which each player can utilise to their advantage in each quarter, also puts a heavy onus on tactics and quick thinking. And it was perhaps an apt time for Pouille to deploy his “steal serve”, giving him four consecutive serves. It didn’t do the trick and he quickly deployed his second card, meaning a winner counts for three points. This time it worked, getting him back into the opening quarter at 11-7.

But with Pouille’s cards exhausted after a sluggish start, it was Benchetrit who was free to ‘steal serve’ and see out the opening quarter 16-11.

“Pretty, good, pretty good. It was a much better start than yesterday, so I just have to keep focused on the next quarter,” said Benchetrit at the first sit-down. “Actually, I wanted to take the same cards as Lucas had, but I forgot to ask it earlier, so I had to have the same cards as yesterday and tried to use them the smartest I can.”

Buoyed by his encouraging first quarter, Benchetrit was playing close to the top of his game and again raced into an early 6-3 lead courtesy of yet another Pouille double fault. But Pouille is nothing if not resilient and, having drawn level, called for one his four allowed coaching timeouts, the message coming back to use the “winner counts for three” card, but to get the first serve in! 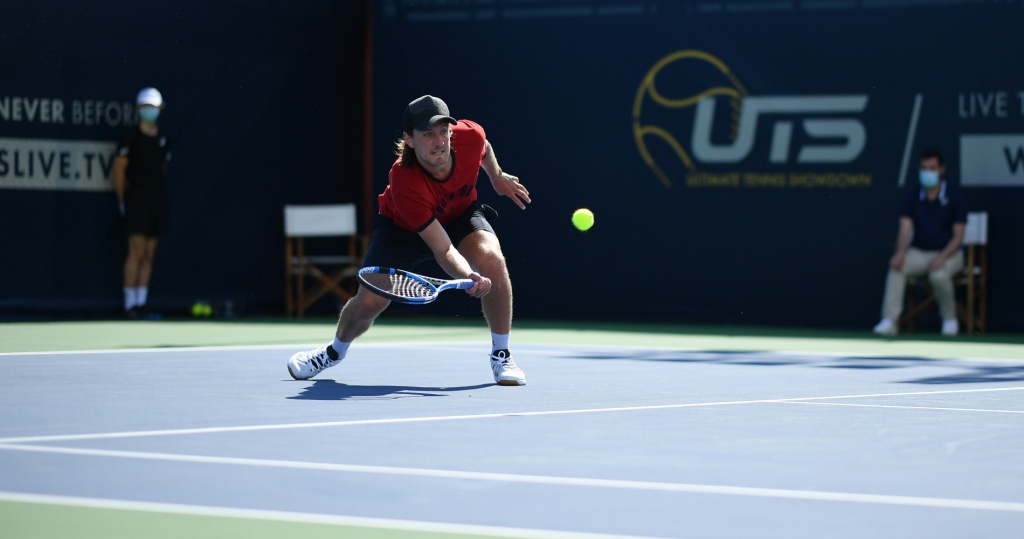 With only a minute on the clock, it was a quarter Pouille needed to win, and with 28 seconds remaining and 13-11 up, Pouille called for his winner counts for three at exactly the right time, rounding down the clock to level the match.

“If you serve well, then you have a chance to win three points in one, so I think it’s a needed card, and yesterday I didn’t use it right so I decided to change,” said Pouille. “You have to be smart, and smarter than the other one, so I’m enjoying it a lot!”

Benchetrit does Thiem a favour

With sets won on points scored rather than games against a 10-minute clock, this was now always going down to the fourth quarter. It was another tense affair, Benchetrit’s coaching time out urging more positivity and hit to the Pouille forehand.

Could we be witnessing the first #UTShowdown upset?

The Underdog @elbenchetrit is a quarter up, thanks to plays like this one 👇 pic.twitter.com/A8S44QCtHo

In contrast, Pouille’s coaching timeout urged him to stay in control with Benchetrit becoming increasingly frustrated. And with “The French Flair” winning two points against his opponent’s -1 serve card, the world No 62 took the initiative, edging out a close quarter 14-12.

In the event of a 2-2 tie, a match would be decided on a sudden death first to lead by two points. And with quarters and points still mattering to the returning Thiem, it was Benchetrit who played his cards at the right time to set up a grandstand finale.

And it was “The Underdog” who produced a comeback fitting of his nickname, converting the second of his match points as Pouille was again left cursing his luck after successive sudden death defeats. 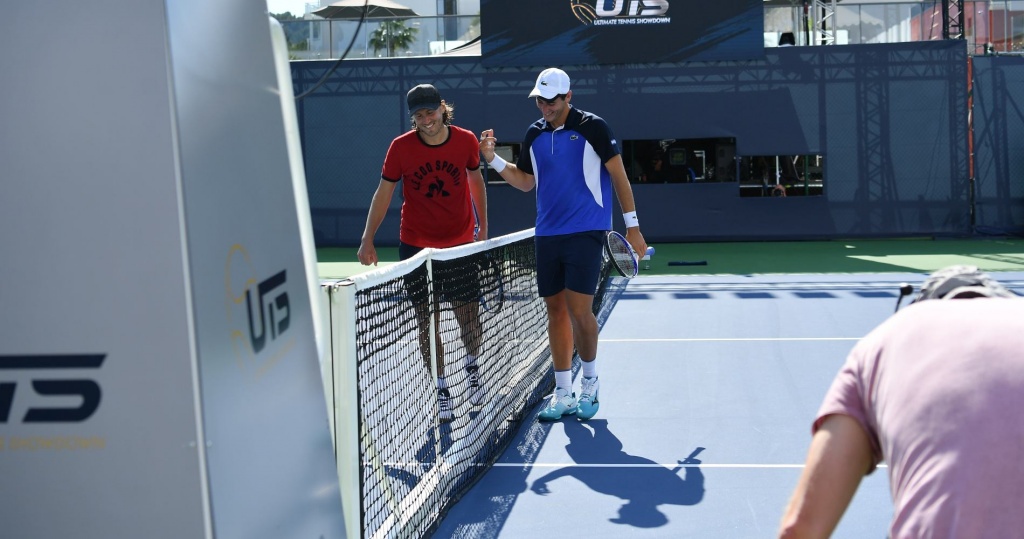