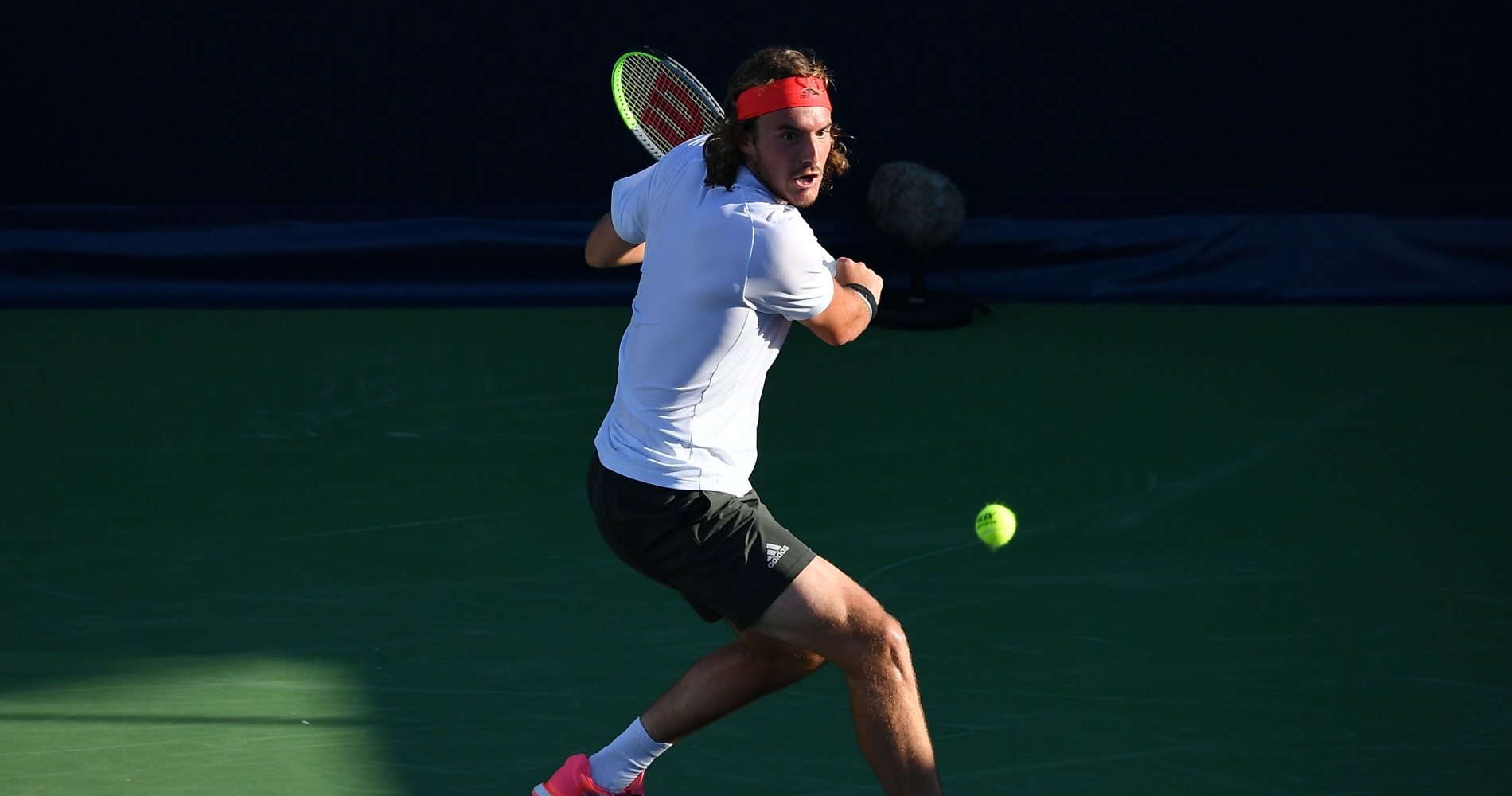 Even in this round robin format featuring 12 top-notch ATP players over the space of five weekends, this matchup was always going to be one of the most entertaining, despite the already exciting nature of this revolutionary quickfire tournament.

Both Tsitsipas and Brown are known for their flamboyant stroke making and speed of play. And this match proved no exception to the rule, The Artist blazing an early winner past a statuesque Greek God, before pulling his man to the net with a delightful drop shot and hitting a backhand drive volley past his stunned opponent.

But Brown being Brown, majestic points can easily be followed by errors, and a double fault allowed Tsitsipas to edge ahead 6-5. With both players opting to use the same UTS cards of “Winners count x3” and “Steal Serve”, it was The Artist who was first to go for broke, hitting an ace winner to claw three immediate points back, before another double.

Here is why @DreddyTennis is known as "The Artist."

Tsitsipas followed suit immediately. And as the 10-minute quarter clock edged into the final three minutes, with the players tied at 10-10, The Greek God crucially lost both points against his own “Winner x3” card. It was a highly entertaining opening quarter, but with playing the clock and utilising cards at the right time key to this format, Brown elected to steal serve with under a minute to go, and only a point behind. It proved an inspired decision, two big first serves sealing the quarter 14-12.

“The whole time I thought I need to serve better and I think after the first day everyone kind of switched it up a bit and I’m serving a lot better, so I’m happy it’s working”, said Brown of his choice of cards.

Stung into action after the disappointment of losing the opener, it was The Greek God who started playing tennis from the heavens, racing to a 7-1 lead. It forced Brown into using the “Winner x3” and, as he managed twice in his previous round, an ace secured him the three he required to get back into the quarter.

But Tsitsipas is a formidable front runner, and with a “Steal Serve” up his sleeve, he opened a healthy gap as the clock ticked into the final four minutes. Players are also allowed four 30-second time-outs, and the advice for The Greek God was to come forward more and use the volley, fittingly the same advice given to Brown. And in a match dubbed ‘The Diving Volley Show’, it was also fitting that Tsitsipas would level matters with a more comprehensive 18-13 quarter.

“It brings the best out of my tennis when I’m a bit pissed, and I understand that,” said Tsitsipas after the second change. “My serve works well and has always been working well when I’m a bit pissed so I guess I have the tendency to just be a bit more loose on the court.”

Another joy of this exciting format is that because a match is played over four 10-minute quarters, the fourth quarter will always come into play unless one player wins the first three. And new format or not, every player is bringing their most competitive edge, Brown venting his fury at an early Tsitsipas shot that he felt went well long.

Now there were two angry and pumped players on the court. But it was The Greek God who seemed to channel that anger better in the circumstances, now returning well enough to negate his opponent’s “Steal Serve” card, as Brown started to wilt in the evening Riviera sun. There was still time for The Artist to entertain with some flourishing brush strokes, painting the line with a couple of late winners to claw back four points in a row.  But Tsitsipas had enough of a cushion to be able to wind down the clock and take the quarter 16-11.

“I just need to serve well, start dynamically like I did in the third, get away in the score and feel a release in tension when that happens, so I have to recreate the same thing I did a few minutes ago. It’s sometimes hard to deal with in the heat and humidity not to have longer breaks.”

During the opening weekend of play, there were a number of occasions where a player fought back to level and take the match to sudden death, so there was still plenty of hope for Brown. And it was The Artist who was first to roll the dice, winning both points on his “Winner x3” before following up with a “Steal Serve” to edge 7-5 ahead.

It looked to be a good advantage, but in a format when cards are as valuable as gold dust, Tsitsipas found a x3 winner to draw level at the perfect time before pressing on the accelerator and edging over the finish line 15-10.

“I’m going to win UTS, because every god deserved a crown!” boasted a confident Tsitsipas before the tournament. And, after a start like this, few would bet against that claim even at this early stage in proceedings.

Three things @StefTsitsipas wants to have in his game? 🤔

The "aggressivity of Federer, the defense of Nadal and the patience of Djokovic." #UTShowdown pic.twitter.com/AoKExR10qF