Welcome to Tennis Majors and live text coverage of the remaining two matches on day 5 of Ultimate Tennis Showdown. 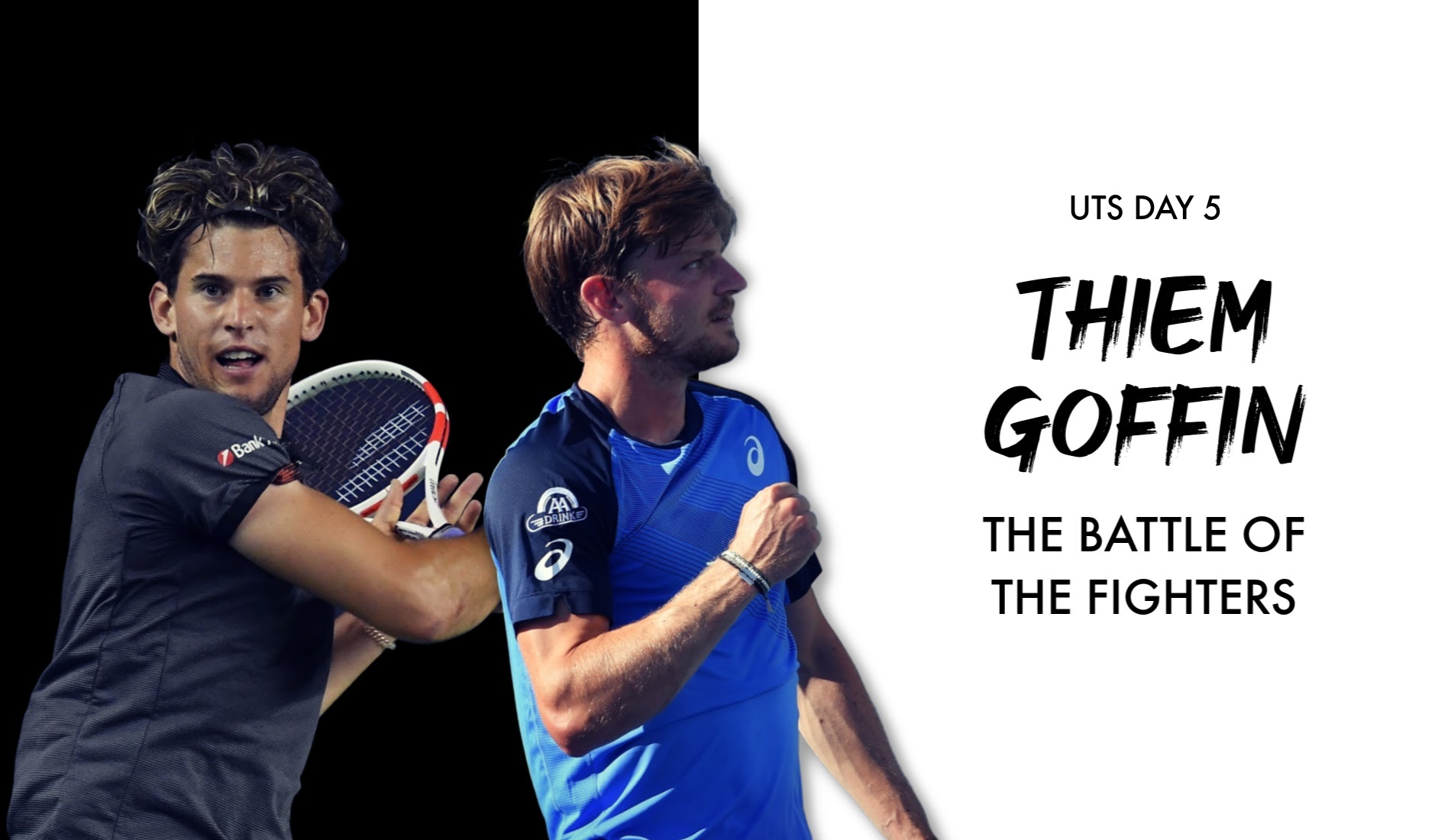 Quarter 4
Both men looking pretty weary and a few more errors from both as they split the first 10 points.
Top drawer! Thiem decides to take his winner x 3 card and hits a stunning forehand pass on the first one, before Goffin rifles a backhand pass on the second.
Goffin gets back on terms at 8-8 and then steals the serve, winning both points to move ahead, only for Thiem to level at 10-10.
Thiem almost hits a pass off a Goffin smash and after a timeout at 10-11, he follows his father’s advice to come in off the return and level at 11-11 with 1.30 on the clock.
But Thiem then serves and volleys twice and loses both points. Goffin takes his winner x 3 card and hits an ace, giving him enough of a cushion to take the final quarter.

Quarter 3
Goffin finds an incredible angle on an inside-out forehand and from 3-1 down he wins both points on the Thiem serve to get back to 3-3.
Goffin takes a timeout and coach Thomas Johansson tells him to be more aggressive on serve. The Belgian levels at 6-6 and with just over four minutes to go, neither man has used a card.
The Wall takes his winner x 3 card and tries a smash from almost on the baseline but misses and Thiem goes up 10-7 before Thiem’s father calls timeout.
Father Wolfgang tells him to serve wide and serve and volley, but misses the first serve before winning the point on the second.
Thiem then uses his -1 serve and wins one of them, to go 12-8. Goffin steals the serve but has only just over a minute to go. With 20 seconds to go, Goffin cut the deficit to 12-10 but there was only time for one more point and Thiem won it to clinch victory.

Quarter 2
At the end of the first quarter, Thiem says he feels nice and relaxed in the south of France, after “an emotional week” having been tested numerous times for Covid-19. “I think I’m the most negative guy on the Tour,” he jokes. Nothing to choose between the two early in the second quarter.
Goffin’s “The Wall” but Thiem is just as resilient. Incredible defence sees him win two lung-busting points and move ahead 7-5.
Goffin uses his steal serve card but loses both points, the second with a double-fault, handing Thiem a two-point lead. Domi goes immediately for his winner x 3 card and starts with an ace, that puts him in total control.
Last throw of the dice for Goffin as he takes his winner x 3 card but Thiem wins both points against the serve to effectively seal the quarter.

Quarter 1
David Goffin might be known as The Wall but he shows fabulous touch at the net, too, digging out a brilliant half-volley early on, but the two men are level at 4-4.
Four points in a row puts Thiem in control, his greater weight of shot pushing the Belgian back.
Thiem picks up only one point with his winner x 3 card but then uses the -1 serve card and it works; Goffin double-faulting on the first.
“Oh my God”, yells Goffin as he misses a backhand and with 1.45 on the clock – and his winner x 3 card still unused, Thomas Johansson calls a timeout.
Goffin used the winner x 3 card but couldn’t capitalise and two big serves were enough for Thiem to extend his advantage and take the quarter.

Quarter 4
An early coaching timeout for Lopez as Marc Lopez calls him in – and tells him to play on the body or body/backhand when on the advantage side.
The net is definitely not on Tsitsipas’ side; another one goes the wrong way as Lopez, using the steal serve card, goes up 5-3. But the Greek God is not going away and he goes up 8-6, before using his steal serve card and extending his lead to 10-6.
That’s the cue for Lopez to use his winner x 3 card but he can only win one point of a possible six and it’s uphill now for the veteran Spaniard.
El Torero wins both his service points to halve the deficit to two points but Tsitsipas still has his winner x 3 card, and he makes a forehand pass on the second one to go up 15-11. Lopez throws in an underarm serve but the quarter is the Greek’s and we’re going to sudden death.

Quarter 3
Lopez is on fire right now! The Spaniard picks up where he left off, rifling a forehand pass down the line and then walloping a forehand to win both points on the Tsitsipas.
Even the net seems to be against him as a Lopez return hits the tape and drops over but out of nowhere, Tsitsipas pulls out an incredible forehand pass to get back to 7-7.
Tsitsipas shows nice touch on the volley to lead 10-8 and this time, Lopez can’t take advantage of his winner x 3 card.
Tsitsipas takes his winner x 3 card but Lopez wins one of them to make it 10-12 and then wins both of his service points to force a deciding point, and a match point for the Spaniard. Tsitsipas finds the service line with his second serve and Lopez nets the return to keep the match alive.

Quarter 2:
The Greek God starts the second quarter with a stunning backhand pass on his way to an early 3-1 lead.
Bit of confusion as Lopez seemed to use his winner x 3 card with the score at 5-5, but on the Tsitsipas serve, and promptly loses both. Turns out he didn’t use it after all, and instead uses it with the score at 5-7, and duly hits an ace and a backhand winner for a six-pointer to go up 11-7.
The Greek God looks rattled and after back to back double faults, his father and coach Apostolos calls a timeout, urging him to get to the net.
It’s all Lopez now, though, and he wins both service points to lead 15-9, before using his steal serve card.
Tsitsipas wins four straight points but there’s only 30 seconds to go and Lopez is serving…
And after Tsitsipas gets to within a point at 15-14, El Torero bangs an ace down the T to finish it off and double his lead.

Quarter 1
Smart start from Lopez, using his lefty serve to good effect, and ripping a backhand winner for good measure.
Tsitsipas changes the momentum with an ace on his second winner x 3 point to take the lead but Lopez then uses his winner x 3 card, and after a double-fault, bangs down an ace for three points to level the scores. Brilliant stuff!
Brilliant athleticism from Tsitsipas to pick up a net cord and flick a winner but Lopez, stealing the serve, then moved ahead again to lead 13-11 with a minute and a half to go.
And he holds on, thanks to a big forehand return and some more great serving to take the quarter.