Live text coverage of day 6 of the Ultimate Tennis Showdown 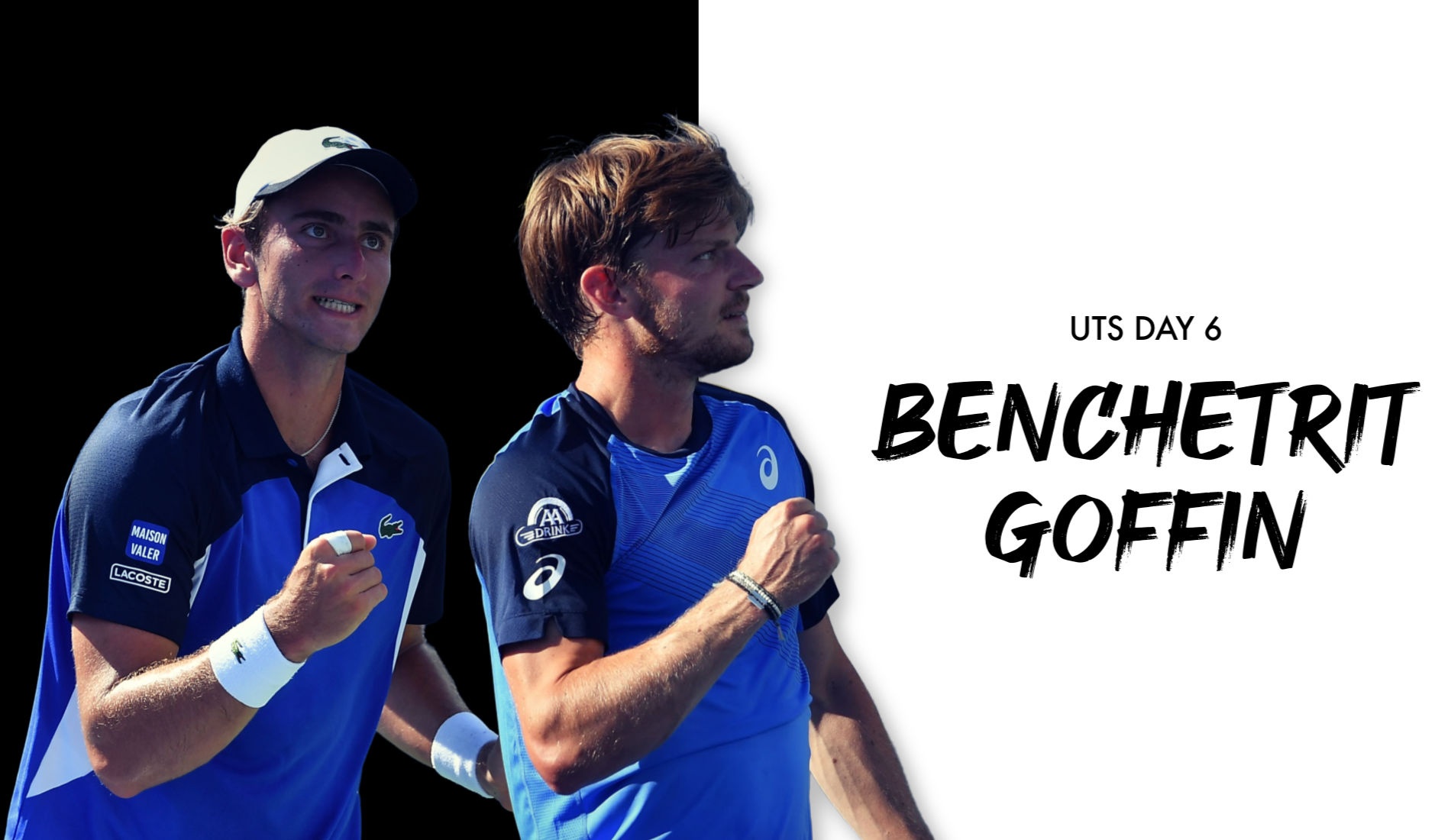 Elliot Benchetrit “The Underdog” vs David Goffin “The Wall”

Quarter 4
GOFFIN WINS! The Belgian pulls clear in the closing stages and eventually finishes a convincing winner. Punches the air as he leaves the court.

Goffin wins back to back three-pointers as he hits a second serve ace and then puts a smash away, throwing both hands in the air in delight, having missed several smashes earlier in the match. This match is as good as over.

Benchetrit hits a forehand with both feet in the air but he still loses the point and the mistakes are flowing now. Goffin gets lucky with a mishit return winner and then wins an epic rally to go further clear.

Quarter 3
Goffin leads! The Wall mangles a smash on his winner x 3 card but there’s not enough time for Benchetrit to get back, though he does play one sublime backhand volley and a between the legs pass but Goffin has the last laugh as he takes the quarter.

Goffin uses his -1 serve card and Benchetrit double-faults on the second one, forgetting that he only had one serve. The Wall looks impenetrable right now, with three minutes to go.

Momentum very much with Goffin and Benchetrit goes early to the winner x 3 card, but he can’t win either and The Wall takes advantage to take a healthy lead.

Quarter 2
Goffin levels up! No time left for Benchetrit to get back into the quarter and Goffin makes it one each. Benchetrit’s coach calls a timeout with 20 seconds to go, though, putting a few thoughts into his head for the third quarter, no doubt.

Benchetrit goes for his winner x 3 card but it doesn’t work and Goffin leads 12-10. The Belgian then takes his own winner x 3 card and he slams an ace down the T and then puts a smash away to claim all six points. No coming back from this now for Benchetrit.

Thomas Johansson calls a timeout for Goffin, tells him to move a little forward into the court. The Belgian then plays the -1 serve card and wins the first point, but a nice net sneak by Benchetrit cuts the gap.

You wouldn’t know it from his smile but Goffin is clearly annoyed at losing that first quarter and he is quickly making amends, taking advantage of a few mistakes to open up a good lead.

Quarter 1
Benchetrit leads, and it’s all about the cards! Goffin goes for his winner x 3 card and gets one of them to lead 13-11 but Benchetrit hits a drive volley for a winner on his own x3 card to lead by two. Benchetrit then wins a great point to go three points clear and there’s no time for Goffin to get back.

It’s getting tense! Benchetrit steals the serve and wins four points in a row to level up, including a second serve ace to level at 10-10.

Great touch on the drop shot from Benchetrit but Goffin uses the -1 serve card at 7-5, taking away the big first serve of the Frenchman. He wins one of the two, then his first service point before Benchetrit’s coach Jean Michel Pequery calls a timeout.

Fast start from “The Underdog”, stepping in after injury to Dustin Brown as he wins the first four points. But The Wall quickly finds his rhythm to level up.

Quarter 4
WOW! THIEM WINS IT! With 25 seconds to go, Berrettini hits a forehand winner and ace to force a deciding point at 12-12. His first serve is agonisingly close, but Thiem then slams a brilliant backhand pass to win the quarter 13-12 and clinch victory!

Boom Boom Berrettini! The Italian hits an ace with his first winner x 3 card to move ahead but a double fault leaves it 10-10 with just over one minute to go.

While he’s got that serve, Berrettini still has a chance to turn this around. But there’s nothing to choose between them and Thiem’s father calls a timeout. Thiem uses the -1 serve card and he takes advantage with a massive backhand up the line and a double-fault puts him firmly in charge.

Berrettini shows nice hands with a fine backhand half-volley early on. Thiem looks so in the mood but it’s level at 4-4.

Quarter 3
It’s all Thiem now and any hopes Berrettini had of a comeback are snuffed out by another untimely double fault and the Austrian goes ahead again.

The ball boys are in danger here, such is the power of both men. Berrettini hammers down an ace but a double fault proves costly as Thiem takes an early lead, ripping a forehand winner past the Italian. Thiem on a roll now.

Quarter 2:
Back on level terms: Thiem takes the second quarter 17-11 to win the quarter, ending Berrettini’s win streak at nine quarters, finishing off with an unbelievable forehand return on the run.

SENSATIONAL! Berrettini hits a monster serve to go up 10-8 but Thiem takes the winner x 3 card, and hits an ace on the first one and then whips a lob on the second over his head to pick up six points out of six.

Thiem refuses a coaching timeout from his father. Berrettini takes his winner x 3 card but Thiem wins both points, the second with a stunning forehand pass and he’s right back in this now.

The Hammer is loving these fast, day conditions. He bangs down some more huge serves and leads 7-3.

Quarter 1
The Hammer leads! Thiem double faults as Berrettini goes up 12-10 but “Domi” still has one card to play, the -1 serve. He uses it with 40 seconds to play but The Hammer holds on to both points and that’s pretty much that.

Coaching timeout for Dominic Thiem, whose father, Wolfgang reminds him when to use his UTS cards and which one to use. Let’s see if he does it.

The balls are flying around already between the two big-hitters. Thiem wins a good point at the net on the Berrettini serve but the Italian gets one back. A couple of bullets later and it’s level again at 6-6.

Richard Gasquet “The Virtuoso” vs Corentin Moutet “The Tornado”

4th quarter
GASQUET WINS! Both men take their winner x 3 card, back to back. Gasquet takes two points but Moutet wins only one. The younger man chucks in two underarm serves but they don’t work and Gasquet can ease through the final minute to claim yet another win at this UTS.

A couple of forehand mistakes from Gasquet but now the backhand comes to the fore, two beauties taking him ahead 9-5 as Moutet lets out his frustration by punching the back fence!

Cagey start to the fourth quarter from both as they share the first eight points.

3rd quarter
Another dramatic ending to the quarter as it goes to another deciding point and this time, Gasquet aces Moutet to win it and go ahead again in the match.

DRAMA!. Moutet refuses a coaching timeout at 6-10, and instead, he picks his winner x 3 card. On the first, he plays a backspin volley that spins back into the net before Gasquet can hit it, then he double faults!

BRILLIANT! Moutet throws in an underarm serve and follows it with an inch-perfect lob and halfway through, it’s 5-5 and Gasquet’s coach, Julien Cassaigne, calls a timeout. “Your ball (the ace called out) is good, but forget about it,” he says. Good advice.

The two men exchange a lovely point at the net, won by Gasquet and the older man takes an early lead as Moutet’s foot comes off the gas after the drama of the second quarter. Gasquet thinks he has hit an ace but it’s called out and Moutet pinches the point.

2nd quarter
WHAT A FINISH! Moutet double faults at 14-11, then takes his winner x 3 card on return and loses both, making it 14-14, resulting in a deciding point. But the youngster finds a fantastic smash on the deciding point to pinch it and level the match.

Gasquet plays the winner x 3 card at 8-12 (the first time obviously didn’t count) but he can only win them in normal fashion. No problem though as he slams a forehand return winner. Moutet takes the next point and it’s 13-11 with 90 seconds to go.

SHOT! There’s the Gasquet backhand, cross-court this time, and he follows it with a drop volley to level at 8-8 before using his UTS steal serve card. He can’t win any of them, though and Moutet is now in charge.

Much better from Moutet as he rifles a forehand down the line and takes a 5-3 lead. A bit of confusion as Gasquet seemingly chooses his winner x card on the return, which is pretty unusual. He wins both points anyway to get back to 5-5 but then double faults and it’s 7-5 Moutet.

Some great reactions from Moutet as he bats back a Gasquet smash and he then finds some form with a nice backhand down the line, accompanied by a roar.

1st quarter
“My racquet doesn’t want to play today,” Moutet says. “It looks like it’s my first day of tennis.”

Last chance for Moutet as he tries his winner x 3 card but double faults on one of them as Gasquet cruises to victory in the opening quarter, hammering a forehand down the line for good measure and the most casual of backhands to finish.

Moutet was brilliant on Saturday but his game’s not clicking yet. Gasquet bangs down an ace and extends his lead with just over three minutes to go. Moutet thinks about chucking his racquet again but just about holds on.

Moutet’s frustrations already boiling over as he hurls his racquet against the side fence. Gasquet running away with the opening quarter.

Fast start from The Virtuoso as he races ahead 5-1. A few nerves from world No 75 Moutet against a legend of French tennis?

Unfortunately, @DreddyTennis was forced to withdraw from today’s match due to a right ankle injury.@elbenchetrit, who went 1-1 the first weekend, will replace him against David Goffin.#UTShowdown pic.twitter.com/6waiZpe2N7