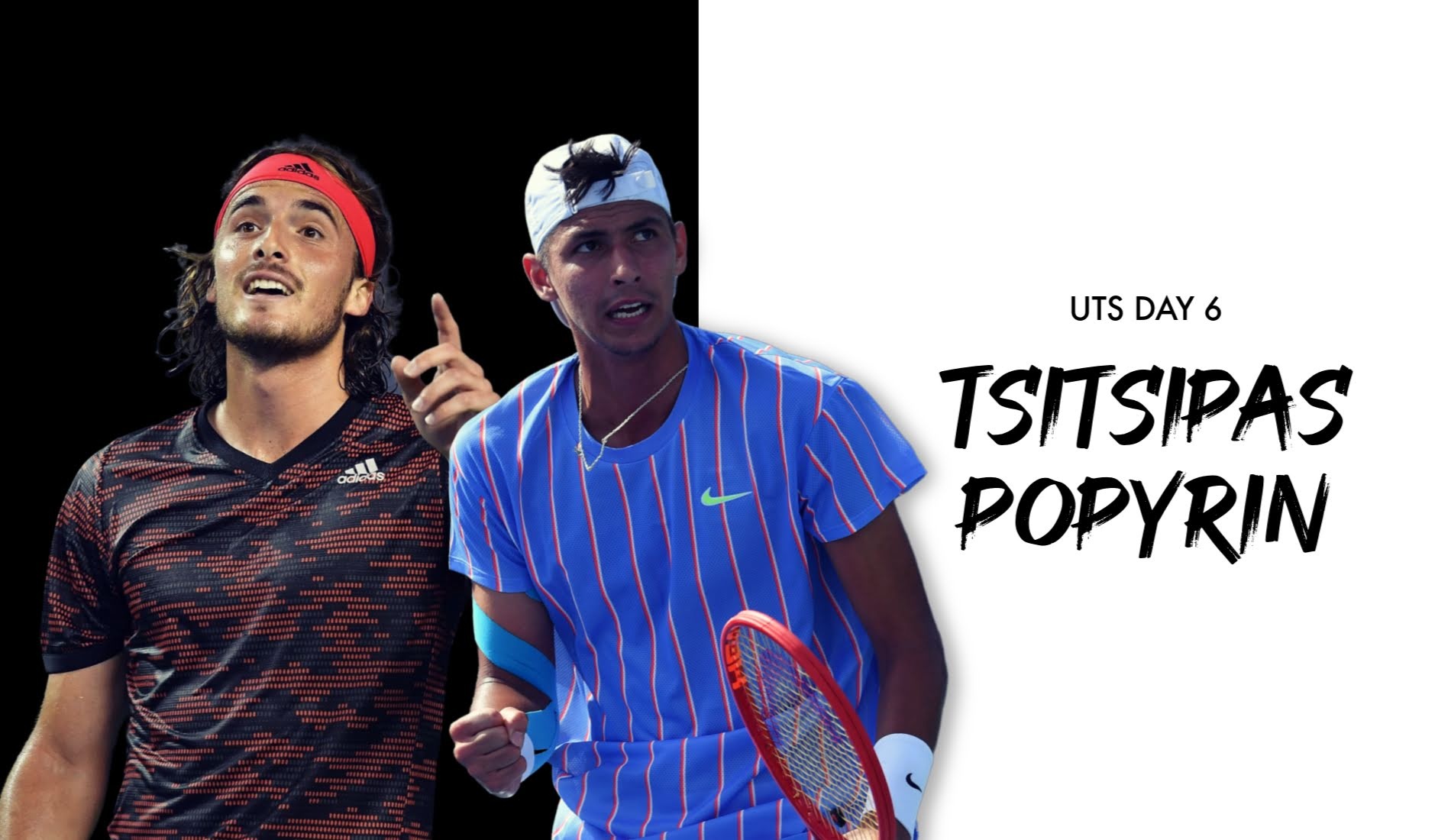 Stefanos Tsitsipas “The Greek God” vs Alexei Popyrin “The Sniper”

Quarter 4:
No cards left for either man and they go to a deciding point. It’s on the Popyrin serve and a nice serve and volley does it, he wins it to salvage some pride but it’s Tsitsipas, the Greek God, who marches on, putting himself top of the UTS standings after day 6.

Tsitsipas tells his father and coach, Apostolos, that it’s time to relax. He looks tired though and Popyrin gets level at 13-13 with just over one minute left.

Tsitsipas shows unbelievable court coverage to flick a forehand down the line for a winner but Popyrin is not out of this one, holding both serve points to level at 11-11. He then steals the serve but wins only one of them. We’re level with two minutes to go. Tsitsipas takes a coaching timeout.

Popyrin uses his -1 serve card and Tsitsipas misses the first one, then the second, and has not remembered he only had one serve. The Aussie then gets within a point as the Greek God misses a forehand but a big serve increases his lead again.

That’s confidence for you! Tsitsipas springs a surprise as he uses his winner x 3 card on the first point! He doesn’t find the winners but he has already won the match so he’s obviously feeling good about things.

Quarter 3
TSITSIPAS SECURES THE WIN! And Tistsipas brings out the winner x 3 card with one minute to go and though he can’t find the winners, he takes both points and as the clock ticks down, he eases to the quarter to ensure he’ll top the standings at the end of the weekend.

Tsitsipas just loves this format! He steals the Popyrin serve and extends his lead even further and with two minutes to go, he still has his winner x 3 card.

The Sniper just can’t get his line of sight tonight and Tsitsipas surges ahead again, 10-6, before Julien Jeanpierre calls a timeout to try to encourage his man. He wants him to be more aggressive.

Popyrin seems to be feeling sorry for himself, moaning about net cords and mishits, and Tsitsipas rubs salt into his wounds as he rips a backhand up the line and dips a return at his feet. It’s one-way traffic right now.

Quarter 2
Popyrin pulls out his steal serve card but the Aussie loses both points, launching the ball into the stands after another double fault makes life even more difficult. Tsitsipas can do no wrong and the Greek God romps through the rest of it to go 2-0 up.

Tsitsipas channels his inner grass-court player as he serves and volleys with serious aplomb. Popyrin looks a bit lost out there right now and with no winner x 3 card, it’s a long way for him to get back into the quarter.

The frustration gets to Popyrin as he cracks one of his rackets following a deep return from Tsitsipas, who extends his lead to 7-2. The Sniper moans about Tsitsipas hitting the frame too often. Not a good sign.

Tsitsipas takes an early lead but his serve is not quite firing yet, another double-fault cutting his lead to 4-2.

Quarter 1
TSITSIPAS IN FRONT! A double-fault at 11-13 does for Popyrin and Tsitsipas, using his winner x 3 card, finishes off in style to take the opening quarter.

What a shot! Popryin “The Sniper” pulls level with a brilliant backhand pass. Then Popyrin uses his -1 serve and Tsitsipas comes up trumps with two big serves. Did he know?!

Interesting that Popyrin has not gone for the winner x 3 card today, given his big serve. He uses his steal serve to try to get back in it and then gets within two when Tstitsipas double faults.

The Greek God is playing like one again already! A brilliant forehand pass rips across Popyrin and he then hits an ace as he extends his lead to 7-3.

Feliciano Lopez “The Torero” vs Benoît Paire “The Rebel”

Quarter 4
LOPEZ WINS IT! Paire goes down 18-11 and surely has to play his winner x 3 card now but he doesn’t! Seems like he’s lost belief he can come back and Lopez, serving like a dream, finishes him off. Let’s just hope Paire is fit to play again next weekend.

Banker! Lopez takes his winner x 3 card at 11-9 and it pays off yet again, with an ace on the first one and another on the second to take a big lead with three minutes to go.

Paire is just slapping everything now, and some of them are going in! Lopez looks a little unsure of what to do.

Paire starts swinging, and comes out fast but a double-fault checks his momentum and Lopez pegs him back.

Quarter 3
Paire has some hefty strapping applied to his right knee and forfeits the rest of the quarter to go 2-1 down. Lopez tries to keep himself warm.

Uh oh! Paire seems in a bit of discomfort with his right knee, moving gingerly to his forehand and then not moving at all on Lopez’s next two serves. Paire’s coach calls a timeout and the Frenchman is having treatment.

Whoops! Lopez calls for the winner x 3 card but seems to have forgotten he’s not serving! Paire laughs out loud but Lopez actually wins both points on the Frenchman’s serve. Paire then comes up with his best pass of the night and he’s up by a couple.

And the drama continues! Paire makes an early move, taking his winner x 3 card at 3-1. He thinks he’s hit an ace, it’s called out and he continues to focus his anger on the umpire.

Quarter 2
LOPEZ LEVELS IN STYLE! Lopez does a great job to block out the noise coming from the other end and the gap is too big for the Frenchman to even think about getting back into this one. Lopez’s coach Marc Lopez calls a timeout at 15 seconds to go but Lopez turns it down, hits an underarm serve ace to finish it off! “We’re putting on a good show, huh,” Lopez says.

What are you doing Benoit?! Lopez takes his winner x 3 card and tries the drop shot, which Paire gets to, but only plays it straight to Lopez, who slides away a backhand volley. El Torero then hits a huge ace to go up 15-7.

Lopez comes out fast for the second quarter, mixing up big serves with some nice angles. The Rebel then steals serve at 5-9, and after a brief delay when Paire, looking troubled, had a word with the umpire, the Frenchman wins the next two points to cut the deficit.

Quarter 1
PAIRE LEADS! What a crazy opening quarter. Paire levels at 14-14 thanks to an ace with a winner x 3 card. Lopez holds for 15-14 but Paire picks up the next two points and then, with five seconds to go, there’s time for one more point. Paire slams down an ace to win it!

Paire has a coaching timeout and it’s clear he is livid with the umpire, for what he thinks are wrong line-calls and even the score being read out wrong! Will it inspire him?

Paire’s temper is boiling over right now! The Frenchman is still annoyed about one of Lopez’s aces and then he argues with the umpire for not hearing what card he wants to use. Lopez takes full advantage, ripping a backhand pass to lead 14-10 with three minutes to go.

Lopez wakes up! The Spaniard takes his winner x 3 card and hits consecutive aces to level it up. Paire smashes a ball out of the stadium in disgust.

Paire’s started slowly in almost every match but not tonight. Serve and volley, even a forehand winner and the Frenchman has a nice early lead.

Unfortunately, @DreddyTennis was forced to withdraw from today’s match due to a right ankle injury.@elbenchetrit, who went 1-1 the first weekend, will replace him against David Goffin.#UTShowdown pic.twitter.com/6waiZpe2N7